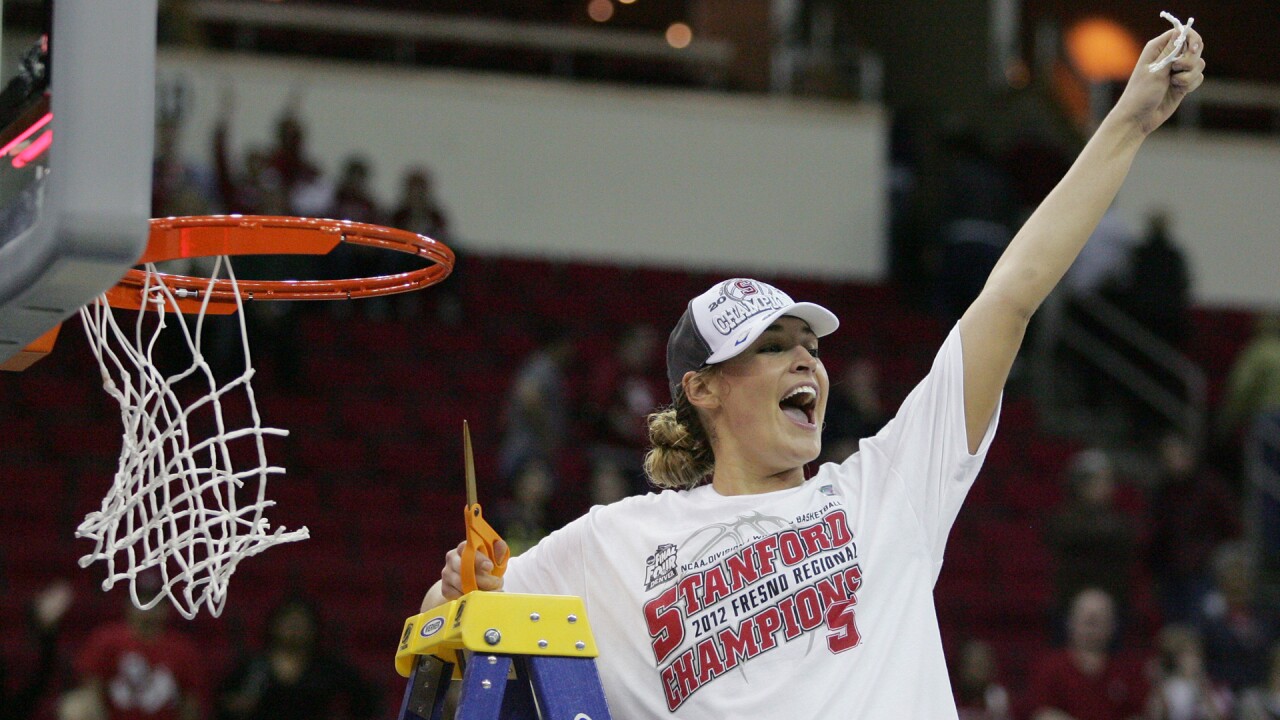 (Editor's note: MTN Sports is re-publishing the original stories from the #MTTop25, which launched in 2017 to profile some of the great girls basketball players in Montana history. Every Friday, we will unveil ‘all-decade teams’ that include athletes not profiled in the #MTTop25 countdown. Thus, players like Jill Barta, who graduated from Fairfield in 2014, and Shannon (Cate) Schweyen, who starred at Billings Central and Montana before ultimately coaching the Lady Griz, will not be featured on their respective decade teams. Those players will be featured in the top 25, regardless of era. Our intention is not to revise history, so we're not going to change the order in which the players were featured. However, some articles will include updates to reflect the latest developments in a player's career. This story was originally published on Aug. 9, 2017.)

No Montanan has ever built a basketball resume like Joslyn Tinkle, the former Missoula Big Sky High School star who was part of three Final Four trips while playing college basketball at Stanford University. On the local, national and international stages, Tinkle has found success at every level.

Tinkle was a star from the beginning. The daughter of former University of Montana basketball players Wayne Tinkle and Lisa (McLeod) Tinkle, Joslyn Tinkle wasted little time introducing herself to the basketball world. She was a four-time all-state selection at Missoula Big Sky High School, helping lead the Eagles to Class AA state basketball championships in 2008 and 2009. A 6-foot-3 forward/center, Tinkle was a 20 points-per-game scorer for the Eagles and was named the state’s Gatorade player of the year after both her junior and senior seasons.

But Tinkle wasn’t just dominant in Montana. She was recognized as one of the best high school girls basketball players in the country, earning all-America honors from Parade and the Women’s Basketball Coaches Association while becoming the only Montanan in history to get an invite to the McDonald’s All-American Game. Tinkle, playing alongside Skylar Diggins, scored seven points and five rebounds in a one-point loss in the McDonald’s Game.

During her high school career, Tinkle was also selected to play for USA Basketball’s Under-18 National Team. The team played five games at the FIBA Americas U18 Championship in Buenos Aires, Argentina, capturing the gold medal. Tinkle averaged 7.2 points, 5.8 rebounds, 1.2 steals and 1.0 blocks per game.

Tinkle was recruited by Division I powerhouse programs from across the country, but ultimately settled on Stanford, where she would go on to have a nice career. The Cardinal advanced to the Final Four in three of Tinkle’s four seasons on campus, including a trip to the 2010 national championship game, a 53-47 loss to Connecticut.

Tinkle was an immediate contributor at Stanford, playing in 34 games as a freshman during the 2009-10 season. She averaged 4.6 points and 2.9 rebounds per game while playing 13.6 minutes a game and was named to the Pac-10’s all-rookie team. Tinkle upped her minutes and averages each year and was contributing 11.8 points and 5.7 rebounds per game by her senior year when she was a full-time starter and first-team all-conference selection. In her career, Tinkle played in 142 career games, the eighth-most in program history. She’s one of 38 players in program history to have scored more than 1,000 career points, finishing with 1,091. Tinkle also ranks sixth in Stanford history with 150 career blocked shots.

After college, Tinkle signed with the Seattle Storm of the WNBA. She played six games in one season with Seattle before ultimately leaving the franchise to play professional basketball overseas. She averaged 11.4 points and 5.8 rebounds per game with the Sydney Uni Flames of the Women’s National Basketball League in Australia during the 2015-16 season.

Former Missoula Big Sky coach Marti Leibenguth: “I know she has every skill that you could possibly have. She can dribble, she can pass, she can shoot, she can rebound and just has all the skills, and she’s so coachable. That was what was wonderful about her, she was a great, coachable kid.

“It was all about the team. If the team didn’t do it then she didn’t do it, and she would sacrifice anything she could to make the team better, whether that was scoring or rebounding or whatever. She would do what she had to do to make the team better. There aren’t many kids of her caliber that would have done that and sacrificed some things. Probably one of the best plays I’ll remember from her was at a state basketball tournament game, one of the other players at the end of the game, it was nip-and-tuck, and she stepped in and took a charge and maybe won the game for us right there.

“I thought she had the skills when she went (to Stanford). Obviously you’re competing at such a high level there, but she adapted. She had to go through some sitting-on-the-bench periods and learning from that, and she did. She learned from that and took it and look what she did as a junior and senior there. She was an incredible kid.”

Missoula Sentinel coach Karen Deden: “I think (Tinkle) was so versatile for being 6 foot, 2 inches. She could put the ball on the ground, she was athletic. Both her parents played in college, so she played from a young age and played at a high level from a young age. She started on the AAU circuit in probably sixth or seventh grade. I think what happens when you have kids like her who come from stock like that, we’ll call it stock, they have a basketball IQ that other kids can’t get. Wayne (Tinkle, Joslyn’s dad) is a coach, and Wayne played overseas until he was like 34 when they came home, and Lisa (Tinkle, Joslyn’s mom) as a collegiate athlete was a better basketball player than Wayne. And I think Joslyn was more like Lisa in the way she played, just headsy. She played within herself, but at the same point in time, within herself was really good. I think what makes Joslyn good was that she also played for Marti Leibenguth, who was a great coach and great basketball player who didn’t confine Joslyn to playing only in the post. Jos played with a really good high school team, including her own sister Elle, so she was able to showcase her talents to the general public.”

Former Montana coach Shannon Schweyen: “I’m going to have to go with Joslyn (as the best player in Montana history), just because of the team success, not so much her first few years, but her junior and senior years at Stanford she was part of some special moments. They beat (the University of Connecticut) when they had the big win streak, going to the Final Fours. I think she, again, was a kid with her size who had post scoring, could shoot the 3, great passer. Those types of things are impressive to me when you have kids who really are complete players all around. I think Jos was definitely that.”