#MTTop25: No. 15 – Bozeman’s Andrea Lalum was a mismatch nightmare for opposing defenses 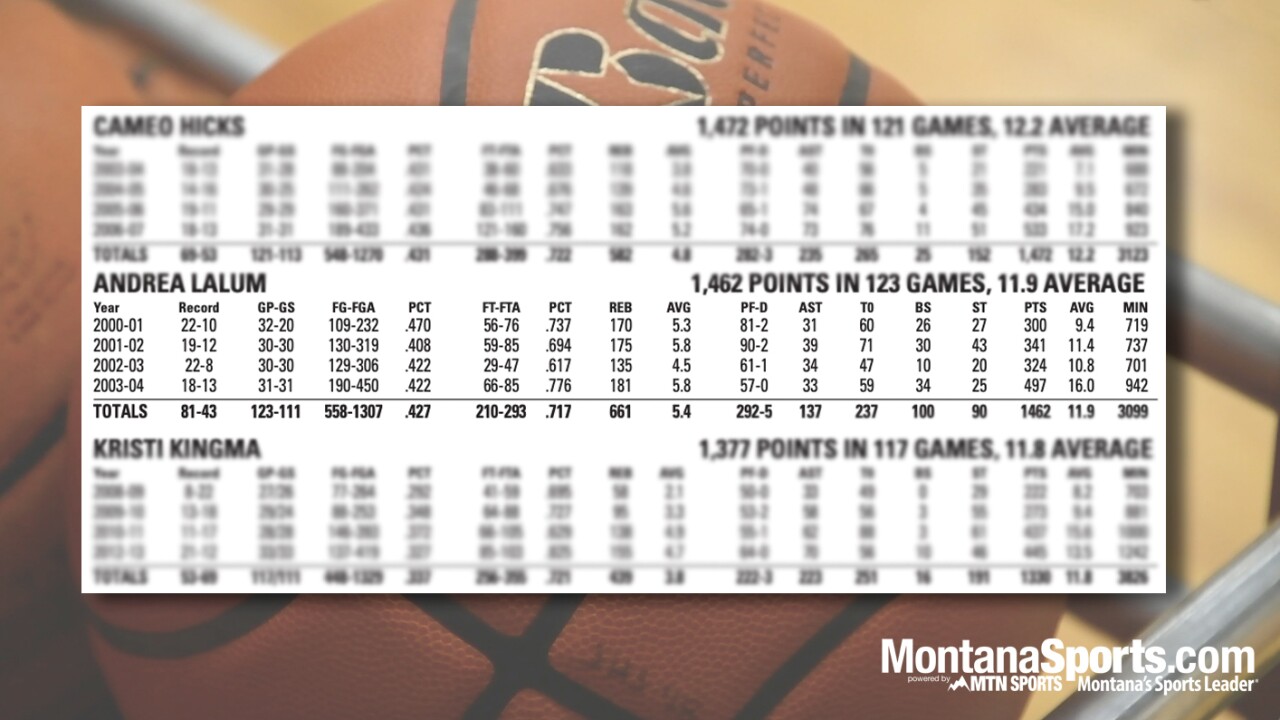 (Editor's note: MTN Sports is re-publishing the original stories from the #MTTop25, which launched in 2017 to profile some of the great girls basketball players in Montana history. Every Friday, we will unveil ‘all-decade teams’ that include athletes not profiled in the #MTTop25 countdown. Thus, players like Jill Barta, who graduated from Fairfield in 2014, and Shannon (Cate) Schweyen, who starred at Billings Central and Montana before ultimately coaching the Lady Griz, will not be featured on their respective decade teams. Those players will be featured in the top 25, regardless of era. Our intention is not to revise history, so we're not going to change the order in which the players were featured. However, some articles will include updates to reflect the latest developments in a player's career. This story was originally published on July 24, 2017.)

Andrea Lalum is one of just a few Montanans who have tasted success in the NCAA Tournament. During her time at Washington, the Huskies twice advanced to the Big Dance, including a trip to the Elite Eight during her freshman season.

Lalum found plenty of collegiate success, but her bright future was evident long before she stepped foot on the campus at the University of Washington. Lalum transferred to Bozeman from Joplin between her sophomore and junior years of high school and made an immediate impact for the Hawks. They won 45 games during her junior and senior seasons and captured the Class AA state basketball championships both years. Lalum averaged 19 points and 13 rebounds per game as a senior and was named MVP of the state tournament. The all-stater was selected for the annual Montana-Wyoming All-Star basketball series and named the 2000 Montana Gatorade player of the year.

Lalum was heavily recruited from NCAA Division I teams across the western United States, but she settled on Washington, where she broke into the starting lineup as a freshman during the 2000-01 season. The 6-foot-3 forward averaged 9.4 points and 5.3 rebounds per game that season, helping the Huskies – along with fellow Montanan and future #MTTop25 selection Loree Payne – advance to the NCAA Tournament. As a No. 6 seed, the Huskies advanced to the Elite Eight with wins over Old Dominion, Florida and Oklahoma. Washington lost to Southwest Missouri State, which had a guard by the name of Jackie Stiles, in the Elite Eight. Lalum averaged 12.5 points and 4.5 rebounds per game during the tournament on her way to earning NCAA West Regional All-Tournament Team recognition.

Lalum was a solid contributor for the Huskies in her sophomore and junior seasons, averaging 11.4 and 10.8 points per game, respectively, and earning all-conference honorable mention honors in the then-Pac-10. But she had her best statistical season as a senior in 2003-04. Lalum scored 16 points and grabbed 5.8 rebounds per game and totaled 34 blocks (she led the team in blocks three of four seasons) on her way to becoming a first-team all-conference selection.

In her four years at UW, Lalum played in 123 career games (starting 111) and scored 1,462 points (15th-most all-time at UW), grabbed 661 rebounds and blocked 100 shots (third-most at UW). She was a versatile scorer and made 136 career 3-pointers, converting 35.3 percent of her attempts from behind the arc, both statistics ranking the program’s top 10.

Following her college career, Lalum signed a free-agent contract with the Seattle Storm of the WNBA. The Storm cut her from the team before she ever played a game, but she did play professionally in Greece for one season before returning stateside.

Former Bozeman head coach Rick Jordan: “She came to us from Joplin as a junior and averaged about 11 (points) per game and about seven rebounds a game her junior year. But again, really balanced state-championship team. We had Kati (Burrows) playing the point guard that year. But about midseason (Lalum) started to show that she could really shoot the 3 at 6-(foot)-3. Then her senior year, she was the No. 1 3-point percentage shooter in (Class) AA. Her senior year, she shot about 41 percent from the 3-point line. And I think that’s what got her so highly recruited is, she could go inside but she could also stick the jumper. With Kati and Andrea, that’s how we ran our offense: Either or both could play inside or outside, because they could both do both.

“She was more comfortable on the perimeter. She was a post player with a 2-guard mentality. She could dribble up the floor if you need her to, make that no-look pass off the dribble. She was fluid; she wasn’t that big, rumbling, 6-3 post player. But when we needed her to – any type of a mismatch we thought we could get with her, because if they put a big post player that had slow feet, we would just put her on the perimeter a little bit and move her around a little bit more. She could go by somebody or she could get that shot open. But she could also dominate inside.

“Oh, she had a ton (of recruiting interest). She actually came down to, her top two were Washington and Colorado. Colorado State was in there, Oregon was in there, Arizona State was in there. I talked to Duke, not necessarily that Duke was interested, but we felt like she could play at about any school in the top 25 going into her senior year, so we made those kinds of calls. Got a lot of top-15 type of at least interest looking at her.”