#MTTop25: No. 13 – From Denton to Lewistown to Montana, Katie Edwards a record-setting scorer 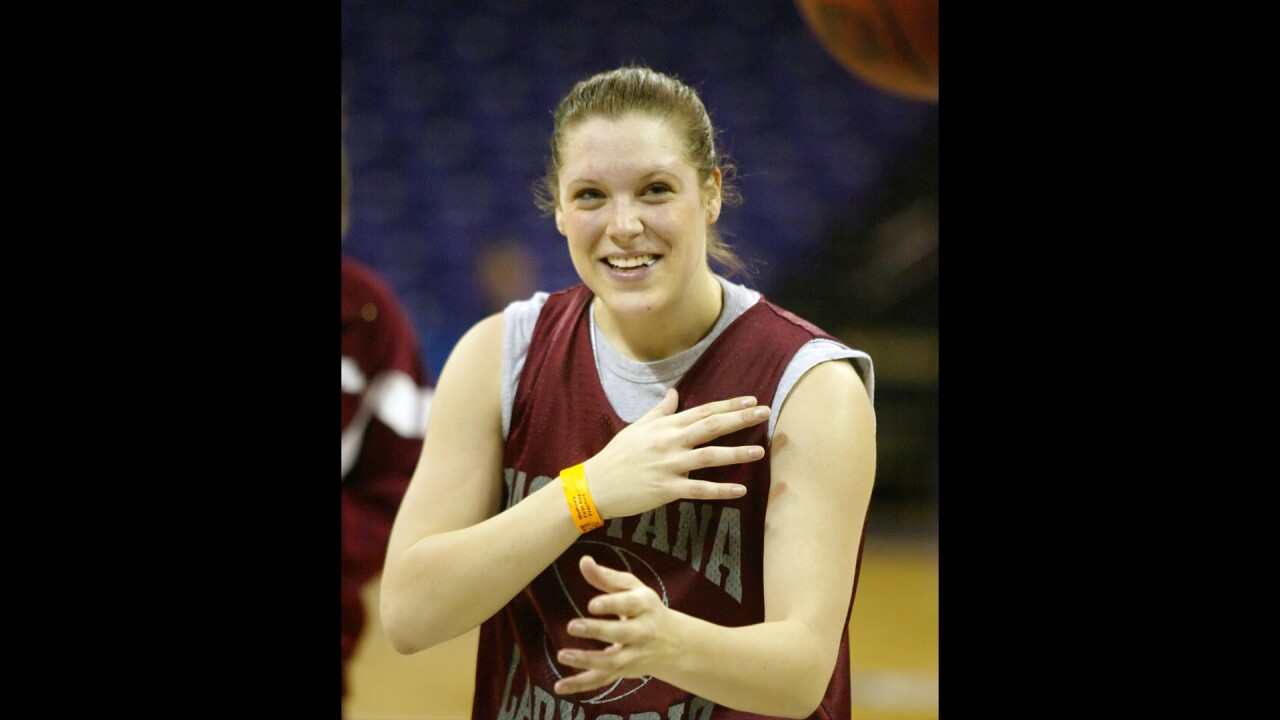 (Editor's note: MTN Sports is re-publishing the original stories from the #MTTop25, which launched in 2017 to profile some of the great girls basketball players in Montana history. Every Friday, we will unveil ‘all-decade teams’ that include athletes not profiled in the #MTTop25 countdown. Thus, players like Jill Barta, who graduated from Fairfield in 2014, and Shannon (Cate) Schweyen, who starred at Billings Central and Montana before ultimately coaching the Lady Griz, will not be featured on their respective decade teams. Those players will be featured in the top 25, regardless of era. Our intention is not to revise history, so we're not going to change the order in which the players were featured. However, some articles will include updates to reflect the latest developments in a player's career. This story was originally published on July 26, 2017.)

Katie Edwards found success at every level she played, proving to be a lethal scorer first at Class C Denton. She found even more success at Class A Lewistown before becoming one of the best scorers in program history at Montana.

Edwards started her career at tiny Denton, where she helped lead the Trojans to the Class C state tournament before eventually transferring to Lewistown for a step up in competition. As a sophomore at Denton, Edwards made more than 60 consecutive free throws and ultimately finished her high school career as the best free throw shooter in history, according to the Montana High School Association record books. Edwards was a career 82.4 percent free throw shooter in high school, sinking 440 freebies during her career.

Between her stops at Denton and Lewistown, Edwards totaled 2,650 career points, ranking second all-time in the MHSA record books, and averaged 26.8 points per game (tied for second all-time). She scored 39 points in a semifinal game against Hamilton at the 2001 Class A state tournament, advancing the Eagles to the championship, where they would defeat Dillon (62-56 in overtime) for the title. Edwards was selected for the annual Montana-Wyoming All-Star basketball series and led the team in scoring both nights, knocking down the game-winning free throws in an 82-80 win in Game 2.

Edwards continued her career with the Lady Griz and made an immediate impact, averaging 9.6 points per game as a freshman. She upped her scoring average each year of her college career, putting in 10.5 points per game as a sophomore, 12.4 as a junior and 14.8 as a senior during the 2005-6 season. All told, Edwards averaged 11.8 points per game over her career, which ranks ninth all-time at UM. Her 1,400 total points are sixth on UM’s career scoring list.

Edwards, like many players from Lewistown – including #MTTop25 all-decade selections Sonya Rogers and Alira Carpenter – was a 3-point specialist. She led the Lady Griz in 3-pointers made every season of her career and totaled 236 makes, the most in program history and fourth-most in Big Sky Conference history. Edwards made nine 3s against Sacramento State on Jan. 22, 2005 to set UM’s single-game record. The nine 3s are tied for the Big Sky Conference single-game record. An all-conference selection in both the 2004-05 and 2005-06 seasons, Edwards also added 354 rebounds, 188 assists and 104 steals during her Lady Griz career.

Former Montana coach Shannon Schweyen: “I think coming from Denton to Lewistown to Montana, she went from small to a little bit bigger to a bigger stage yet. When I think of Katie, I do, I remember the Sacramento State games and I do remember the game here against Louisiana Tech in a sold-out arena and Katie had a great game. She became more complete in trying to, one of the things in her game was becoming a better playmaker for others and passer for others. When she was in Denton and Lewistown it was pretty much the Katie show and she did a lot on her own. She became a great teammate to make that part of her game a lot better.

“Katie had an uncanny ability for people to think they were actually guarding her but they weren’t. I can’t tell you how many teams we would see from the bench, they would be close to her and have a hand up, and we would say, ‘It’s going up.’ Sacramento State was a team that Katie just killed year in and year out. I think she had eight 3-pointers in a game there, maybe nine. She could shoot the 3 really well from long range and she was really crafty, putting the ball down and getting to the hole, all the different ways she could score. She had a very quick release, a very unassuming release: People thought they had a hand up on her but they didn’t. Just a great kid, a fierce competitor and one of my favorite Lady Griz to be around.”