#MTTop50 No. 6: Larry Pretty Weasel a transcendent star at Hardin 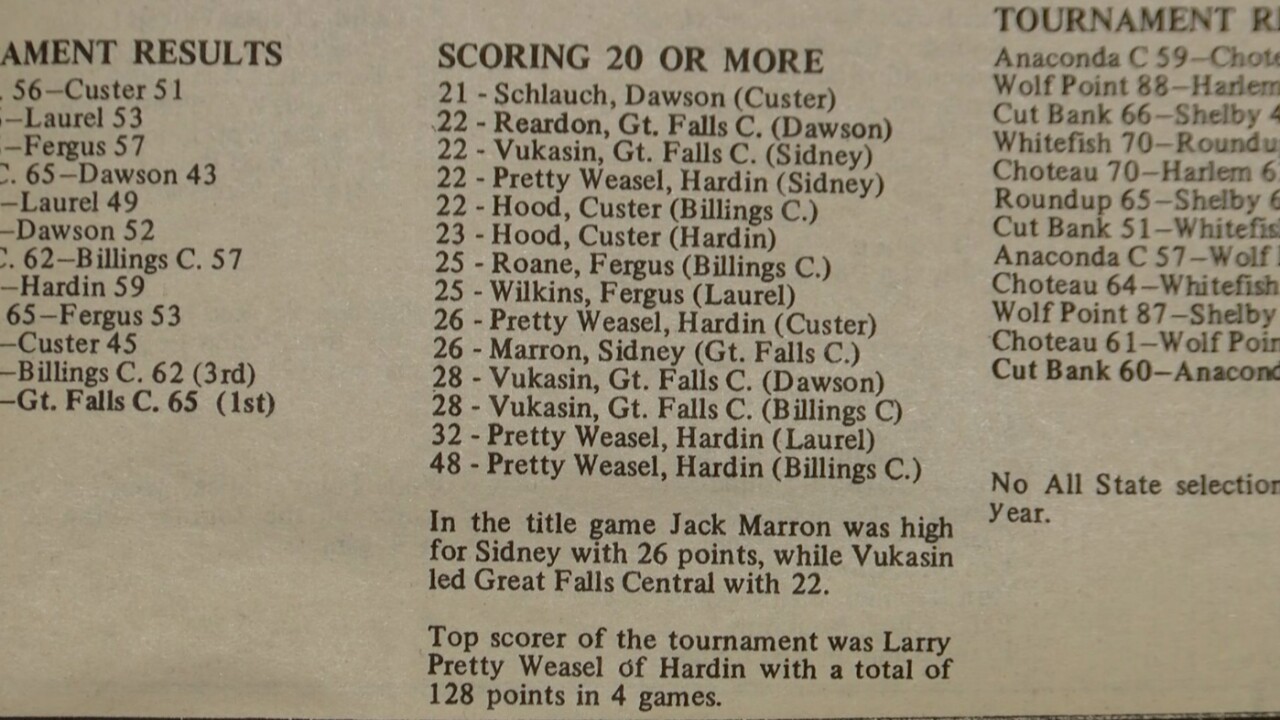 (Editor's note: While we're faced with a sports-less world during the coronavirus pandemic, MTN Sports is going to re-publish the original stories from the #MTTop50, which launched in 2016 to profile some of the great boys basketball players in Montana history. The first six weeks of the series separated players by decade, beginning with athletes from 2010-present that first week. The sixth week, athletes from the 1960s, ‘50s and earlier were profiled. The weeks between featured five players each from the 2000s, 1990s, 1980s and 1970s. Players like Tres Tinkle, who graduated from Missoula Hellgate in 2015 and is currently playing at Oregon State, and Wayne Estes, who starred at Anaconda and Utah State in the 1960s, were not featured in their respective decades. Those players will be profiled in the top 20, regardless of era, which MTN Sports began with Reece Gliko. You can find a full rundown of the 30 players featured the first six weeks by clicking here. Our intention is not to revise history, so we're not going to change the order in which the players were featured. However, some articles will include updates to reflect the latest developments in a player's career. This story was originally published on Aug. 12, 2016.)

When discussing basketball in Montana, the historical impact of great Native American players is often front and center. The #MTTop50 has already profiled some of the best, including Mike Chavez and Don Wetzel Sr. But many basketball historians consider Larry Pretty Weasel to be the best Native American player ever to step foot on a court in Montana. While that is certainly debatable, his impact is not.

Pretty Weasel was a transcendent star at Hardin in the 1950s, bringing recognition to basketball on Montana’s reservations. The Bulldogs placed third at the 1957 Class A state tournament, losing to eventual champion Sidney, 60-59, in the semifinals. Pretty Weasel scored 128 points in the four tournament games, including 48 in Hardin’s consolation-game win over Billings Central.

Pretty Weasel earned all-state honors, scoring 712 points during his senior year (29.4 points per game). In 15 conference games, he averaged 31 ppg, which included a 54-point outing. Standing only 5-foot-10, Pretty Weasel was known for his quickness, jumping ability and dexterity. Former Hardin teammate George Grover recalled stories of opponents discussing Pretty Weasel’s ability to change hands on his jump shot in mid-air, depending on how he was being defended. Fans would flock to gymnasiums across eastern Montana just to get a glimpse of Pretty Weasel, who remains a legend in Montana basketball lore.

He was a state high jump champion at Hardin and was named Montana’s most outstanding athlete. Big-time colleges – including the likes of Utah and Texas A&M – came calling, but Pretty Weasel elected to play at Rocky Mountain College. He ultimately returned to the Crow Reservation, where he still lives.

Former teammate George Grover: “He was a hard worker. Always at practice, he didn’t loaf. He didn’t expect to be great, but he just was. … Larry wasn’t very tall, he was only about 5-10. But he could jump. Toby Kangas coached at Sidney and they’re the ones that beat us in the semifinals, and he said that Larry had the quickest first two steps of anybody he had ever seen, said he could fake anybody out because those first two steps were so quick. He wasn’t fast, but the first two steps were quick. … (Pretty Weasel’s stats) would have looked a lot different (had their been a 3-point line), because long jump shots were his forte – take a couple of quick steps and then shoot a jump shot from probably 15 or 20 (feet) at least. … He was a team player. If he didn’t get a shot, he would pass it and move around. And then he knew that eventually if somebody else didn’t get a shot, he was going to get one anyway. So a real team player.