#MTTop50 No. 8: Jack Gillespie one of the all-time greats at Montana State 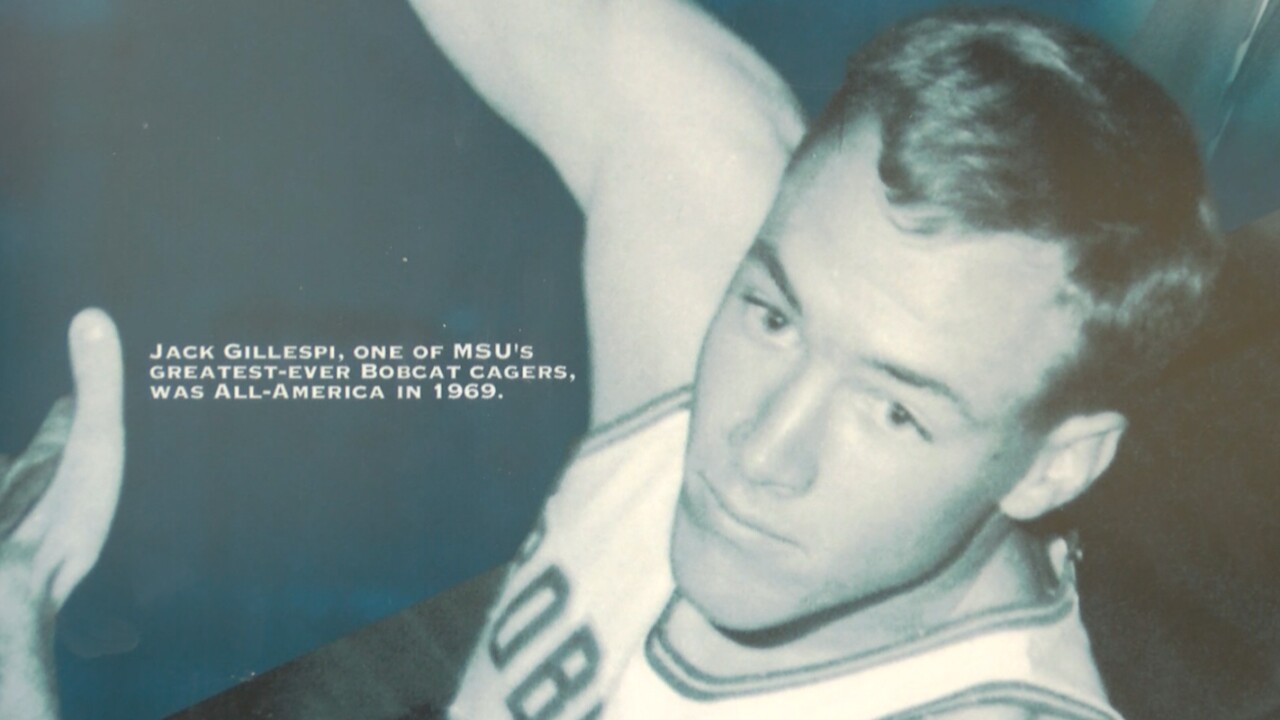 (Editor's note: While we're faced with a sports-less world during the coronavirus pandemic, MTN Sports is going to re-publish the original stories from the #MTTop50, which launched in 2016 to profile some of the great boys basketball players in Montana history. The first six weeks of the series separated players by decade, beginning with athletes from 2010-present that first week. The sixth week, athletes from the 1960s, ‘50s and earlier were profiled. The weeks between featured five players each from the 2000s, 1990s, 1980s and 1970s. Players like Tres Tinkle, who graduated from Missoula Hellgate in 2015 and is currently playing at Oregon State, and Wayne Estes, who starred at Anaconda and Utah State in the 1960s, were not featured in their respective decades. Those players will be profiled in the top 20, regardless of era, which MTN Sports began with Reece Gliko. You can find a full rundown of the 30 players featured the first six weeks by clicking here. Our intention is not to revise history, so we're not going to change the order in which the players were featured. However, some articles will include updates to reflect the latest developments in a player's career. This story was originally published on Aug. 10, 2016.)

The 1960s were a tremendous era of basketball in the state of Montana. Numerous athletes went on to play Division I college basketball – including a couple who even went to Duke – but No. 8 on the #MTTop50 stayed close to home. Jack Gillespie, who still lives in Great Falls, is one of the best all-time Montana State Bobcats.

Gillespie helped lead Great Falls to the 1965 Class A state championship, earning an all-state selection and tournament MVP honors. He scored 22 points in the title game as the Bison topped Columbia Falls 62-61. The 6-foot-9 center scored 58 points in the team’s three tournament games.

Gillespie reached his peak at the college level, though, attending Montana State, where he became one of the best – if not the best – players in Bobcat basketball history. He was a three-time all-Big Sky Conference selection (freshman couldn’t play varsity basketball in the 1960s) and twice earned the conference’s player of the year honor, adding all-America honorable mentions during his final two seasons with the Bobcats. As a sophomore during the 1966-67 season, Gillespie helped guide the Bobcats to the Big Sky Conference championship, as well as the All-College Tournament championship in Oklahoma City, defeating the likes of Texas and Temple, which was undefeated at the time. Gillespie became the program’s all-time leading rebounder with 1,011 boards and ranks second with 1,543 career points. MSU inducted him into the school’s Hall of Fame in 1987, and he was selected to the Big Sky’s 25th-anniversary team in 1988.

Gillespie was drafted by the NBA’s Los Angeles Lakers in 1969 but never signed with the team. He instead played one season with the New York Nets in the American Basketball Association and six years of professional basketball in Europe.

Former Montana State teammate Tom Storm: “Jack was a tremendous hook-shotter with the right and left hand. Nobody can do that. They might have one hand. Like Lew Alcindor, great hooker right hand. Well, Gillespie had a great left hand. Matter of fact, his left hand ended being better than his right hand. And he was a tremendous rebounder. He averaged over 15 rebounds when he was a senior. He’s the best player that’s ever played at Montana State, as far as I’m concerned.

“He definitely got better every year. He got mature, put on weight, got stronger. When he was a sophomore, I was a senior. And at the end of his sophomore year, he was really getting good. We were really a good team, because he had matured quite a bit.

Former Montana State coach Roger Craft: “He was about automatic down (on the block). Jack was big, but he was quick for a big guy. He could just get a half-step on those men. He had great range with it. Like I said, the one at Missoula was a little longer than most of them, but he could still step out to the free throw line and hook without any problem. The biggest thing I think people had to do was keeping the ball away from him, and he was quick enough it was hard for them to do that. He had a great career for us from that standpoint.”