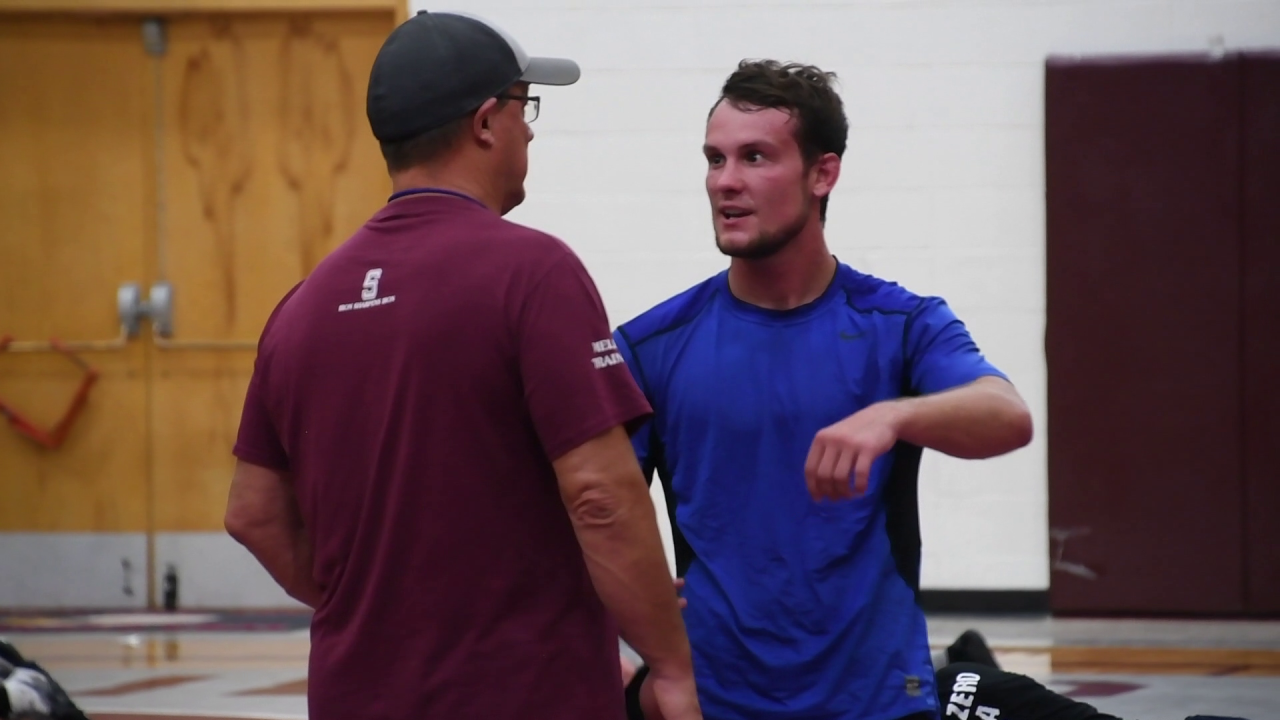 (Editor's note: This is the final of eight features highlighting the careers of the 2020 Little Sullivan Award finalists. Links to the other stories can be found at the bottom of this article.)

There were the eight Class A team championships, including four straight from 2003-06 when Jones was in elementary school.

There were the dozens, 50 plus, individual champions, and the star-studded alumni: Brandon Eggum, Lynn McChesney, Ryan Hagen, Jesse Obergfell and the Melby clan -- Gary, Gresh, Beau and Grady, not to mention their father, head coach Guy Melby and his impressive staff.

Gresh Jones knew it all, but wasn't the least bit intimidated.

Jones created his own portion of Sidney wrestling's history, winning four consecutive titles from 2012-15, joining Obergfell as the only four-time champions in program history. But Jones dominated outside Montana, as well, becoming a three-time undefeated grappler at the Disney Duals and garnering USA Wrestling all-American accolades.

Those accomplishments, along with the familiarity with Eggum, the head coach at his alma mater University of Minnesota, led to a roster spot for Gresh Jones with the Gophers. He won his collegiate debut, placed fourth in three open tournaments and won eight matches in a redshirt season.

After three semesters in Minneapolis, Jones looked to transfer after the university's physical education program he was pursuing, a degree in exercise science, was dropped. When younger brother Trace announced his intentions of playing college football at Dickinson State University (N.D.), Gresh started the process of joining the Blue Hawks of head coach Justin Schlecht.

A disappointing finish at his first NAIA Championships served as motivation for Jones, who decided to remain in Dickinson for the summer, perfecting his technique and honing his craft.

Schlecht remembers seeing near-instant improvements, as Jones captured the Heart of America Conference title at 133 pounds before earning a fourth-place, and ensuing all-American, finish at the national championships.

He bested that finish the following season, his junior year, with a third-place effort and second all-American honor. Both seasons, Jones wrestled in the national semifinals, falling by only three points.

“One of our big focuses is plastered all over the walls in our room, that's 'No regrets,' you know, so no matter where your career finishes, whether it's finishing odd or finishing even, not going to the big show, whatever it is, to be able to walk away and say, 'Hey, I got no regrets. This was the best version of me that I could put out there,’” Schlecht said. “At the end of the day, I think Gresh has got no regrets.”

Jones spent the majority of his senior season ranked No. 1 in the country, entering the national tournament fourth, though a disappointing finish ended his career.

Still, Schlecht recalls Jones walking off the mats and saying something to the effect of, “I guess that chapter is over. Now it’s time to start working on getting the next group of guys in the room,” Schlecht said, noting that Jones will be a student-assistant this upcoming season while he finishes his student-teaching in Dickinson.

Jones is set to graduate in December, but Schlecht looks forward to his continued leadership in the DSU wrestling room.

Jones and Schlecht will continue to maintain their level of respect for one another. After all, they hold the common goal of training future Blue Hawk all-Americans.

But the coach does chuckle when discussing some of his memories of Jones, who did have his not-so-secretive bad habits when he wasn’t on the mats.

“The one thing that always bothered me about Gresh was, in the offseason and out of season, the kid has a terrible, terrible nutrition habit, and he's drinking energy drinks and all those kinds of things. I mean, he eats well, but that's his one caveat, that's his kryptonite, an energy drink, and that used to drive me crazy and it still does drive me crazy about him,” Schlecht laughed. “He was always good about in-season what he did and what he was eating and drinking then and putting for good fuel in his body, you know, but, God, that drove me crazy how that kid can, you know, I was never that fortunate. ... I even look at my one Mellow Yellow for the week and gosh, it feels like I put on three inches of belly fat.”

“His first day working for me, he had never driven a clutch pickup,” Schlecht continued of his trip down memory lane. “He had to drive a clutch back to the shop and I had to take 20 minutes to teach him how to drive back. He is not mechanically sound at all, at all. You would think coming from eastern Montana, the kid would have done some of that. Not a lick. He calls me all the time, ‘Hey, what do I do for power steering fluid? Is that the same as the engine oil?’”

Luckily wrestling techniques were the only mechanics Jones needed to focus on.