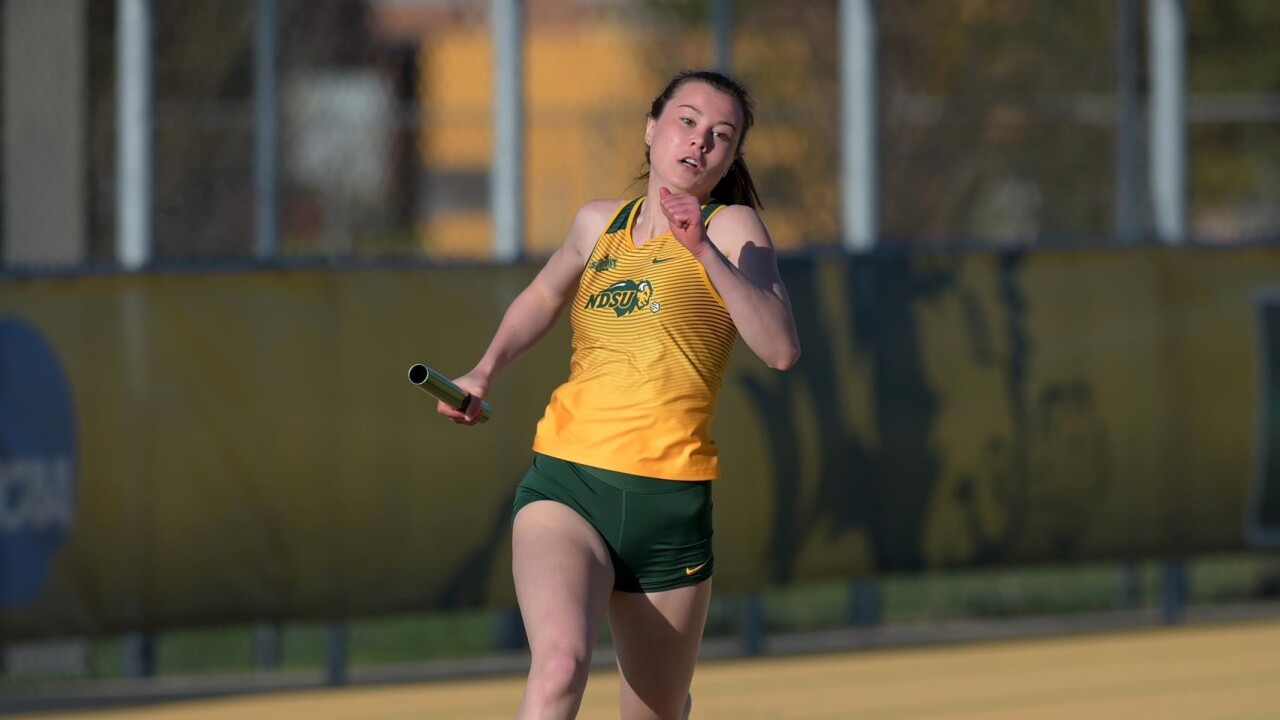 (Editor's note: This is the second of eight features highlighting the careers of the 2020 Little Sullivan Award finalists. Links to the other stories can be found at the bottom of this article.)

FARGO, N.D. — Paige Harris wanted to make a name for herself.

Growing up in Plentywood, Harris watched as her older brother, Pres, became a Class B track and field state champion in the 400- and 800-meter races during his senior year of 2012. Brit Harris, the second child in the family, was also a fine athlete for the Wildcats, with each setting the bar for Paige as she entered high school.

Harris placed fourth in the 400-meter dash at the 2013 Class B state meet and earned a top-10 finish in the 200. She repeated her fourth-place 400 effort the following season but added a fifth-place finish in the pole vault — Harris tied for the second-best height but fell to fifth on attempts.

Her junior season of 2015 saw Harris stand on the State B podium four times, finishing runner-up in the pole vault, again on attempts, with a fifth-place time in the 400 and sixth-place finishes in the 200 and 800. She broke through as a senior, winning Class C state titles (Plentywood dropped to Class C that year) in the pole vault (10 feet, 1 inch) and 400 (58.29 seconds).

The marks were enough to earn a shot at NCAA Division I North Dakota State seven hours southeast in Fargo.

“We recruited her kind of as a preferred walk-on,” said Bison women’s track and field coach Stevie Keller. “She was familiar with North Dakota State because she had family, her sister (Brit), her brother (Pres) had come to NDSU, she had grandparents in town, so that helped draw her interest to North Dakota State.

“Some things that were intriguing about her is that she did a number of different events in high school -- she vaulted, she ran the 400, the 200, a bunch of other things, relays and things like that. She was kind of one of those kids that you kind of hoped that when they get to college with a little more guidance and a structured program that they can excel, and Paige definitely fit that category.”

Success didn’t come immediately for Harris, whose focus was initially the 200- and 400-meter dashes. But her times weren’t quick enough to earn a spot on NDSU’s conference team.

“I remember calling her back and asking her, 'Paige, have you ever hurdled before?’” recalled Keller. “She was like, 'Well, I did a little bit growing up,' but I'm like, 'Well, I think you should. Maybe we should try the 400 hurdles, because that might be an event that would be something you could make our conference team.’”

Days later, Keller signed Harris up for the event at the Ron Masanz Classic in Moorhead, Minn., where she ran a respectable 1 minute, 5.20 seconds.

“It wasn't anything that, 'Oh wow, she's definitely a 400 hurdler.' But we ran them again and she ended up making the conference team,” said Keller, adding that Harris placed fifth at the Summit League Outdoor Championships.

By then, Harris and her coach were hooked. Her training intensified throughout the summer and into the fall of her junior year, with Keller admitting she seemed to be “a different person, a different athlete.”

She finished the Summit League Indoor Championships fourth in the 400 and ran a leg on the runner-up 1,600-meter relay, but when spring rolled around, the focus was back to the one-lap hurdles. Harris shaved her times over the course of the season, running a personal-best 1:02.94 at the Kip Janvrin Open in late April, winning the event in Indianola, Iowa.

But the most memorable moment came two weeks later at the conference outdoor championships.

“We get to the finals of the 400 hurdles, and I think her PR leading up to that race was 62 high, maybe 63, and she obviously ran a great race, ended up winning and ran 60-point something,” Keller said of the 1:00.67 that made Harris a conference champion. “That's one of those as a coach that I'll never forget. One of our girls had wiped out, so I was kind of looking to see if she was going to get up, and I didn't see the finish of the race, but I saw the scoreboard as I'm running across the field and Paige knew she won, but she had no idea what she ran, and then when she found out she ran a 60 I think the whole stadium heard her: 'I ran a 60.67?’ As a coach, it's one of those things that you just, all the hard work and everything she put into it paid off.”

“I was obviously, this year was looking forward to her getting outside and being able to run the 400 hurdles more,” Keller continued, referencing the outdoor cancellation due to the COVID-19 pandemic. “I saw her as a potential (NCAA Championships) first-round qualifier this year had the season gone on.”

Harris’ PR in the 400-meter hurdles, the event she never planned to do, ranks No. 7 in NDSU program history. Keller also points out her 4.0 GPA as a pre-med student and the fact she’s set to attend medical school at Montana State with a program through the University of Washington.

Though dozens of athletes have come through the Bison program that were more gifted, more successful, Keller admits it’s those like Paige Harris that leave the greatest legacies.

“I've been around a lot of student-athletes over the 20 years that I've been here at North Dakota State, and I'd put her in the top 1 percent of those kids, you know, someone that we're going to tell stories about for years,” Keller said. “It's one of those stories you want to tell of a walk-on that earned a scholarship, that won a conference title. Something that I probably won't forget in my coaching career is watching that race and just seeing, she wasn't the best hurdler, but she was tougher than the rest of the kids out there on that day. That's kind of how she raced, was just put it all on the line every time.

“So definitely somebody that, when you sit around and tell stories to the underclassmen about people that have come through your program, they've been successful, not because they were maybe the most talented kid in the world, but definitely brought out all the talent they could with their work ethic.”

Talk about making a name for yourself.