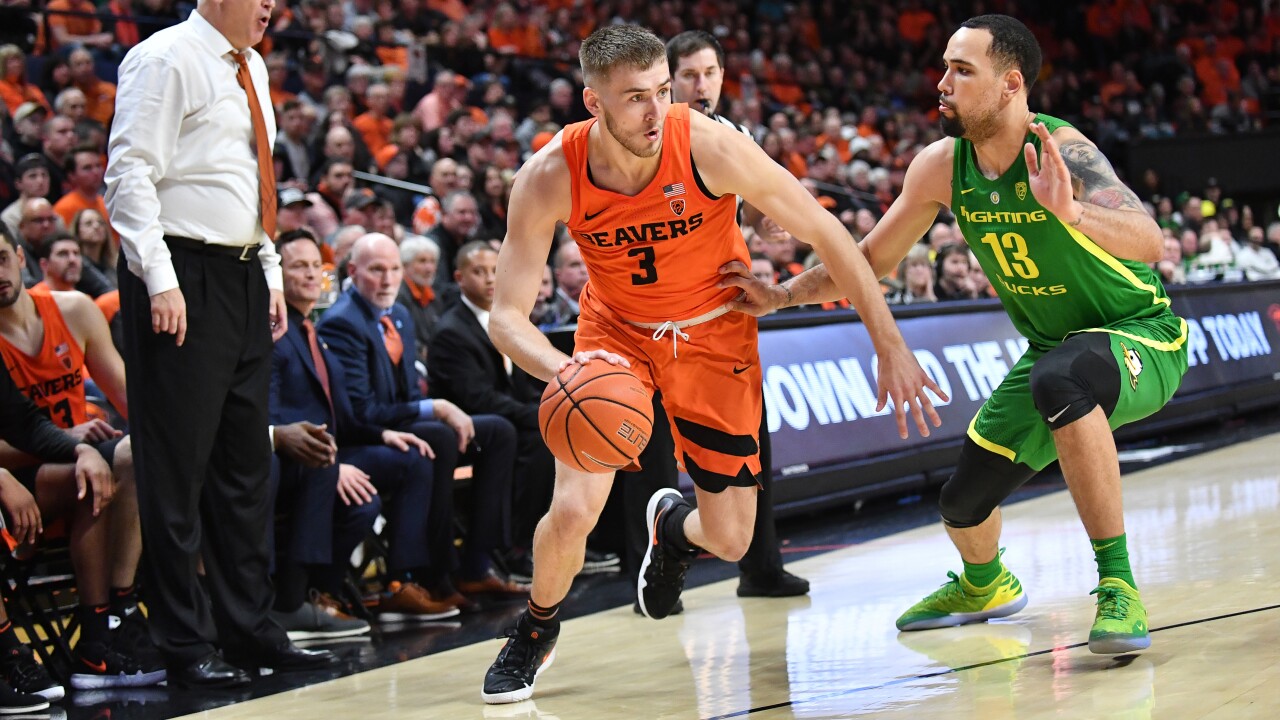 (Editor's note: This is the fourth of eight features highlighting the careers of the 2020 Little Sullivan Award finalists. Links to the other stories can be found at the bottom of this article.)

MISSOULA -- Jeff Hays always expected Tres Tinkle to be a special performer on the basketball court. But even he couldn't have predicted the record-breaking career Tinkle has enjoyed.

Hays, who now coaches the boys basketball team at his alma mater Missoula Hellgate, was a freshman on the University of Montana men's team when Wayne Tinkle, Tres' father, joined the coaching staff. Hays knew of Wayne Tinkle's storied career at UM, as well as the stellar career of his wife, Lisa (McLeod) Tinkle, a former Lady Griz standout.

When Wayne and Lisa welcomed three children to the world, two daughters and a son, Hays figured a basketball would wind up in their hands.

“It’s pretty remarkable, that family. Each of them are incredible players in their own right, and Tres is no exception," said Hays. "I think their legacy, individually and collectively, is almost unmatched. But with them being great players, they’re also great people. I think that’s something that needs to be recognized, as well, because they have tremendous talent, but they’re fantastic people.”

Hays can recall seeing Tres Tinkle in the gym often, putting up shots, working on his ball-handling. But it wasn't until his freshman year at Hellgate he truly wowed his coach.

That's a resume longer than most. Tres Tinkle helped the Knights to a Class AA state championship his sophomore season, going the length of the floor for an off-balance, one-handed shot to force overtime against Helena Capital.

"Any other player, that wouldn’t have happened," according to Hays.

Along the way, Tinkle became a four-time first-team all-state selection, McDonald's all-American nominee, and earned recognition at prestigious national events like the Nike EYBL (most versatile), LeBron James Skills Academy (jack of all trades) and Earl Watson Elite AAU program camp (best player). While watching Tinkle, those in attendance at those events, like Hays at Missoula Hellgate, were often left with their jaws dropped, heads shaking with a smile.

“I would say it probably happened once a week. Whether it was the way he made a move, I feel like he was one of the first players in Montana that utilized the euro-step to create additional angles and abilities to score around the basket, in the lane. He did so many things that were so amazing," said Hays. "You try not to take it for granted, because it was so special and he was so consistent with it. There were definitely plays where you’re going, ‘How did he do that?’ Or it was, ‘Nobody else should try that. That’s something only he can do and has the ability to do.’”

For the past five years, that talent only grew as Tinkle competed against some of the best basketball players in the NCAA. Playing for his father at Oregon State, he would go on to re-write the Beavers' record books.

The father-and-son duo helped OSU to the NCAA Tournament in Tres' freshman season, though he missed the final five games of the year with an injury. He averaged 13.1 points, 5.4 rebounds, 1.2 steals and 1.1 assists and was named to the Pac-12 all-freshman honorable mention team. A broken right wrist sidelined him for the majority of the 2016-17 campaign, though he was given a medical hardship.

He became one of the top players in the league the following season.

With numbers of more than 17 points, 7 rebounds, 3 assists and a steal per game, Tinkle was named first-team all-conference, an honor he would repeat his final two seasons, each which saw him named to the final 10 for the Julius Erving Small Forward of the Year award. His name is littered all over the OSU record books, including the most career points (2,233), most free throws made (570) and attempted (723), second-most 3-pointers made (185) and third-most field goals made (739).

"You have to have that ability to be special, but he worked really hard," said Hays. "To take on, and to have that target whenever you go play someone else, being at the top of their scouting report, but continuing to put up the kind of numbers that he did, I can’t say that I predicted that. I thought he would be a really good player at Oregon State, but what he accomplished was maybe surprising for everybody except for Tres.”

Like his father, who played professionally overseas, Tinkle hopes to pursue a pro career, specifically in the NBA. After entering his name in the NBA Draft a year ago, withdrawing to return for his fifth and final season at OSU, he hopes his improvements are enough for scouts and an organization to give him an opportunity.