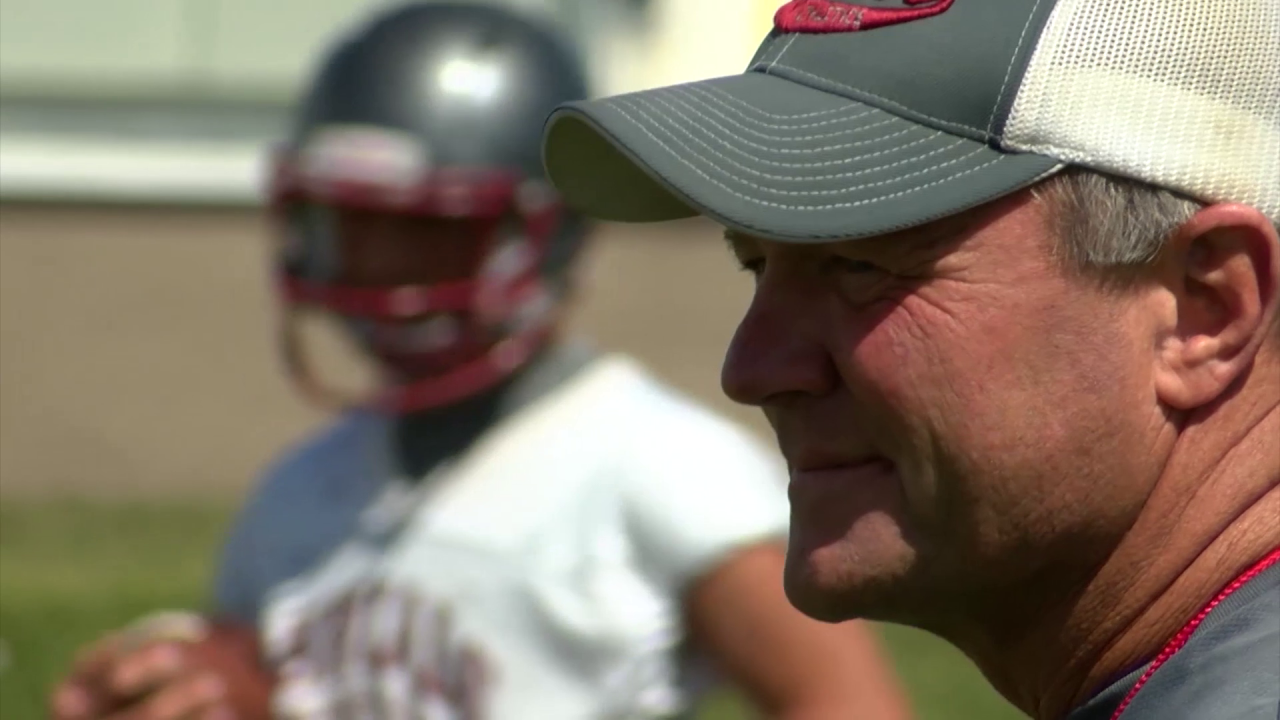 HELENA — Tony Arntson is still a relatively new face around the University of Providence athletics offices, but the longtime coach already knows he’s right where he needs to be.

“I think it's going to be, as we go through this thing, it's going to definitely be one of the highlights of my career,” he said.

Arntson was named head coach of the Argo track and field and cross country programs in June 2019, nearly a year ago, but, due to measures beyond his control, he’s still a rookie as far as the entire job description is concerned.

“It is really a new gig because I haven't got to coach a track season yet,” Arntson said, referring to the coronavirus canceling the NAIA’s spring sports season. “We got kind of a makeshift little indoor season, we didn't have many runners, but our throwers got a little indoor season in.”

For three decades, Arntson has cared about his athletes’ best interests, be it pursuing a college scholarship, chasing personal goals or simply enjoying one final season with friends and teammates.

Those relationships stem from the bonds he made during his playing days at Great Falls CMR, where “Coach Arntson” was born.

“I knew right from the start that coaching was going to be something I wanted to do, and I did it all,” he said. “I basically started as a freshman coaching little kids in basketball and did that mostly through high school, and then came back and started at CMR in '89 and '90. I was blessed to be able to coach my brother and Dave Dickenson and that class, a lot of great kids in that one. No doubt in my mind where it was going to head right from the start, for sure.”

But Arntson had the itch to become a head coach, and his former mentor, Jack Johnson, certainly wasn’t leaving CMR anytime soon. Arntson’s cousin, Jeff Arntson, happened to live in Hot Springs at the time and called about an opportunity in nearby Charlo.

“I'd never been exposed to 8-Man football in my life, so I drove up there, checked it out, and I loved the town. It had a great football history back in the 1970s but had been down for a long time,” said Arntson. “It was a great opportunity, I thought, to get a start and get some head coaching experience. So I drug my wife out of California, we got married that summer and drove to Charlo the next day and started the career up there and I loved it. It was the greatest experience ever.

“It'd be one of the things, when I give a speech at the (Montana Coaches Association Hall of Fame) induction, is to thank those Class C coaches. They treated me so well and there were so many great ones around the state, and their love and their passion for just the game, that genuine passion for it really, really set in with me. And I loved it. I coached basketball, track, coached all year. I took care of the fields in the summer. It was just a great experience.”

“I don't know that they were real excited about hiring a 26-year-old head coach,” he chuckled. “I think I was a very late interview, but I finally did get one. I came down and I interviewed, and I actually took the head coaching job without a teaching position. It didn't make my wife very happy, but things came around.”

Though he was eager at the opportunity, Arntson certainly had his hands full, taking over a program that hadn’t won a state championship since 1932 and had appeared in the title game only once since — a 39-13 defeat at the hands of Kalispell Flathead in the 1958 Class AA chipper.

“It was definitely a program that needed to be built from scratch. … I tell everybody all the time that out of all the great things that happened for 23 years after the first year, that first year, I remember that thing like it was yesterday. I can remember almost every minute of every day,” said Arntson. “We had great athletes, unbelievable athletes: Danny Sprinkle and Chad Brandon and Tim Agee, I mean big names in that class, but those kids bought in. We won our last game of the season, but we were in every game.”

The Bengals won many more under Arntson’s watch, advancing to the Class AA semifinals 11 times and finishing runner-up on four occasions, the first in 1998 and the last in 2017.

Though he’s known mostly for his gridiron successes, Arntson was also an impressive leader for track and field athletes, a love he first earned under legendary Charlo coach Bret Thompson.

“He'd been a head coach for quite a while and was a very good mentor of mine and became a good friend of mine,” Arntson said of Thompson, a fellow MCA Hall of Fame member.

“When I came (to Helena High), Bill Gilbert, who, you know, he's a legend of course, and he's a Hall of Famer, and Doug LeBrun, I mean, when I took the sprint assistant job in 1994, every coach on that staff had been coaching longer than I'd been alive. And that's the honest to God truth,” laughed Arntson. “Terry Beaver and Pat Connors. I mean, there was track legends there at Helena High, so, man, I was circled by a lot of good guys.”

Arntson said his association with track and field originally began as a spring workout for football players, noting that 80-90 percent of the gridders joined the Bengals’ track team. It didn’t take long for him to fall in love with the spring sport.

“I was blessed with some, whoa, unbelievably talented kids throughout the years and especially the last eight or nine years there. It was unbelievable,” he said. “We watched the 400 state record get broke two years in a row, and that record went all the way back to 1976 before Connor Matthews broke it (in 2016), and then Zander Mozer broke it the next year. Just to watch the caliber of athletes throughout the year, I really fell in love with track.”

There are too many memories to recall, both from football — like Helena hosting the state championship game in 1998, just a few years after he took over the program — to track and field — where 14-year-old freshman Trey Tintinger set a national high jump record by clearing 7 feet, 1.5 inches.

But topping the list was the opportunity to coach both sons, Troy and Ryan, in both sports.

“It's definitely that. That's a highlight just to have that opportunity. I was blessed with a great wife and two great kids that I was so honored to be able to be around them and watch them, not just compete in sports, but turn out to be great young men and kids that I'm so proud of,” said Arntson. “To be able to coach them is unbelievable.”

Arntson often thinks about those days, there is some downtime after all with no spring track season, but he admits there are days he misses the Friday nights under the lights and the chess matches with some of the best coaches Montana has offered.

“Coaching against Jack Johnson (CMR) and Dale Pohle (Great Falls High), Gary Ekegren (Missoula Big Sky) and (Paul) Klaboe (Billings West) and (Ron) Lebsock (Billings Skyview) and Jon McElroy at Butte High, I mean legends of Class AA football. And I was blessed to be able to, it made for a lot of hard Friday nights, trust me,” he laughed. “There was some tough evenings and some very somber Saturday mornings, but, man, to be around those guys, and to be treated like they treated me was unbelievable.

“Coach Lebsock always sticks out in my mind from Skyview. That guy, I just have so much respect for him. He was such a high-class guy all the time, and he just always treated me so well. But all those guys, it was just a great honor and I just couldn't have ever asked for anything more. It was definitely a blessing and one heck of a career, for sure.”