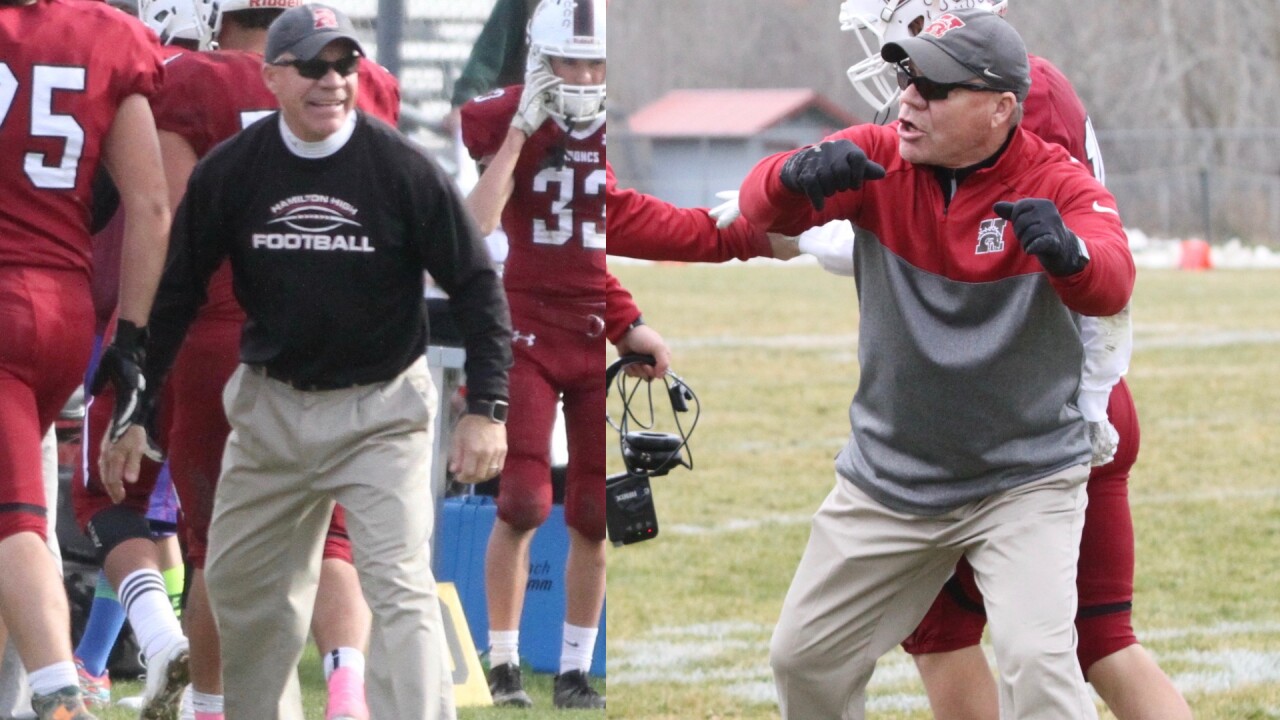 “It's been kind of a long way around, but I really still enjoy the game (of football),” said Weston, who coaches the offensive and defensive lines at Hamilton High School. “I'll be 65 here this month and I feel like I still have a lot to give to the game, and so I really enjoy it still.”

All this a full decade after Weston announced his retirement.

It’s a sport Weston admits is tough to walk away from. He started playing football as an 11-year-old in Deer Lodge and went through the high school athletic programs years later at Powell County High School.

“Back then there wasn't a lot of sports like there is now,” Weston said. “You were a football guy, a basketball guy and a track person, so I participated in all those sports as I grew up.”

One school came calling with a scholarship, nearby Montana Tech, leading to a three-year career with the Orediggers’ football team. Weston transferred to Western Montana College in the spring of 1976, and, after sitting out his one required season, was part of the Bulldogs’ 1977 Frontier Conference championship team.

The following year, Weston student-taught at Dillon’s Beaverhead County High School, serving as an assistant coach on the football team that finished runner-up to Glendive in the Class A state championship game.

“I was a part of that and really enjoyed the coaching aspect of it,” said Weston, who landed a job in Belgrade in June of 1979, though a failed mill levy cut his position and others in the district.

That dismissal forced Weston to turn to his mentors for advice, asking them to keep his name in mind should any coaching positions across the state turn up. Immediately, one came calling.

“I got a call from Darby, Montana, which I didn't really know where Darby even was actually at that time,” he laughed. “They had a sixth grade opening, so I went over and interviewed for that job in June, and lucky enough I got that job.”

“I stayed in Darby for 13 years and had a great, great career there. Really enjoyed it a lot. The people were wonderful,” he continued. “Back then the timber industry was doing real well, so we had 230 kids in our school, and when I got there we had some tough kids and really, really good kids, hard-nosed kids. We had some great playoff runs, not that we got real deep. We always ended up playing like Choteau or Cut Bank in the quarterfinals and never quite good enough to get by those guys because they were loaded with the Kowalski’s, and we played Choteau one year and they had a really good running back.”

But while Weston taught in Darby and coached the Tigers, he still lived 17 miles away in Hamilton, where his son was set to enter middle school. Weston and his family had to decide between him leaving the coaching world or bringing his son daily to Darby. Once again, fate intervened.

“I was just fortunate that the head job opened up (in Hamilton) and in '93 I got the head football job at at Hamilton High and very, very fortunate that I got that opportunity,” he said. “I guess the rest is just kind of history. I've been there for, I guess, 27 years now.”

Much like today’s Broncs, Weston’s program was a legitimate contender in western Montana, winning three conference crowns and advancing to the Class A state championship game four consecutive times between 1997-2000, winning the first two. In just his third season at the helm, Weston had Hamilton in the state semifinals where it lost to Miles City inside the 1-yard line.

After stepping down in 2010, Weston returned to the sidelines as an assistant for then-coach Travis Blome, but it was a transition that required some homework.

“Travis came in with the air raid, so when he brought me on to be the O-line coach, I had to learn a lot of different type of techniques, especially learning how to run the zone schemes and all of those kinds of things that he ran,” Weston said. “I think that's why I'm still in it, because I really enjoy those strategies now -- the wide open, fast-paced (style), where we used to be the, every time (after a play) you huddled and all those kind of things. … I really enjoy the fast-paced game as well as the old style. I bring a little bit of that to (current Hamilton coach Bryce Carver), and I still learn a lot from him and from Travis. I owe those guys a lot just for bringing me on.”

While it’s the gridiron that turned him into a household name, Weston was equally as impressive as a softball mentor. Under his tutelage, Hamilton won six divisional championships and brought home state hardware on five occasions, including the 2003 Class A state title, despite the coach holding no softball experience.

He had coached his son, Brad, and others in baseball for nearly a decade, but switching to a girls program that was “kind of in disarray” required some serious adjustments.

“Their program was not very organized, the girls just didn't want, they wanted to make it more fun, kind of like a summer league thing, and I wasn't all about that. I was pretty young at that age and stuff, and I brought a whole new mentality to how they had to be coached, and they weren't used to it. In fact, I had girls cry for the first three weeks, almost every single day at practice,” Weston recalled. “They just weren't used to that intensity that I brought to them and things like that. But after a while, I think girls want to be coached. They're very talented, they work hard and you just kind of carry it over.”

“I don't want to say I'm really, really hard-nosed, but I was for them,” he continued. “Kids wanted to bring sunflower seeds in the dugout and laugh and giggle between innings and things like that. To me, that just wasn't the way the game needed to be played. It needed to be more focused and we needed to be more tuned in to what we were doing through the seven things that we're playing, or six innings we played. But they bought in, so that's what it's all about.”

Weston’s programs were better because of it. Though times have changed, his expectations of student-athletes have not, and he continues to preach the same methods that helped both Broncs programs turn corners.

“It's hard, but winning's hard. If winning was easy, everybody would win. That's kind of how we buy in around here,” he said.

Weston has seen dozens of coaches come and go during his tenure, a theme that continues to become more common.

“I think you have to be true to yourself, you know what I mean? You can't be somebody that you're not, I think kids see right through that,” he said of his advice to younger coaches. “And you have to be able to stick to your guns a little bit. Let's face it, today's parents are hard to coach. Sometimes a lot of people think that their kids are Division I players and they're not, so it's hard to deal with parents nowadays. And I think you just have to build, stick to your guns a little bit and try to weather the storm. If you're really, really passionate about it, you'll stay with it. Just believe in what you're doing and go from there.”

It’s sound advice from an experienced, proven coach of more than 40 years. Advice even he couldn’t ignore in his own retirement.

“Sixty-five, I think that's the age where everybody goes, 'Oh my gosh, you are a retired senior citizen guy,’” he laughed. "I'm really, really fortunate. My wife is wonderful. She lets me still coach. … She’s a wonderful, wonderful lady and I'm very lucky to be married to her.”