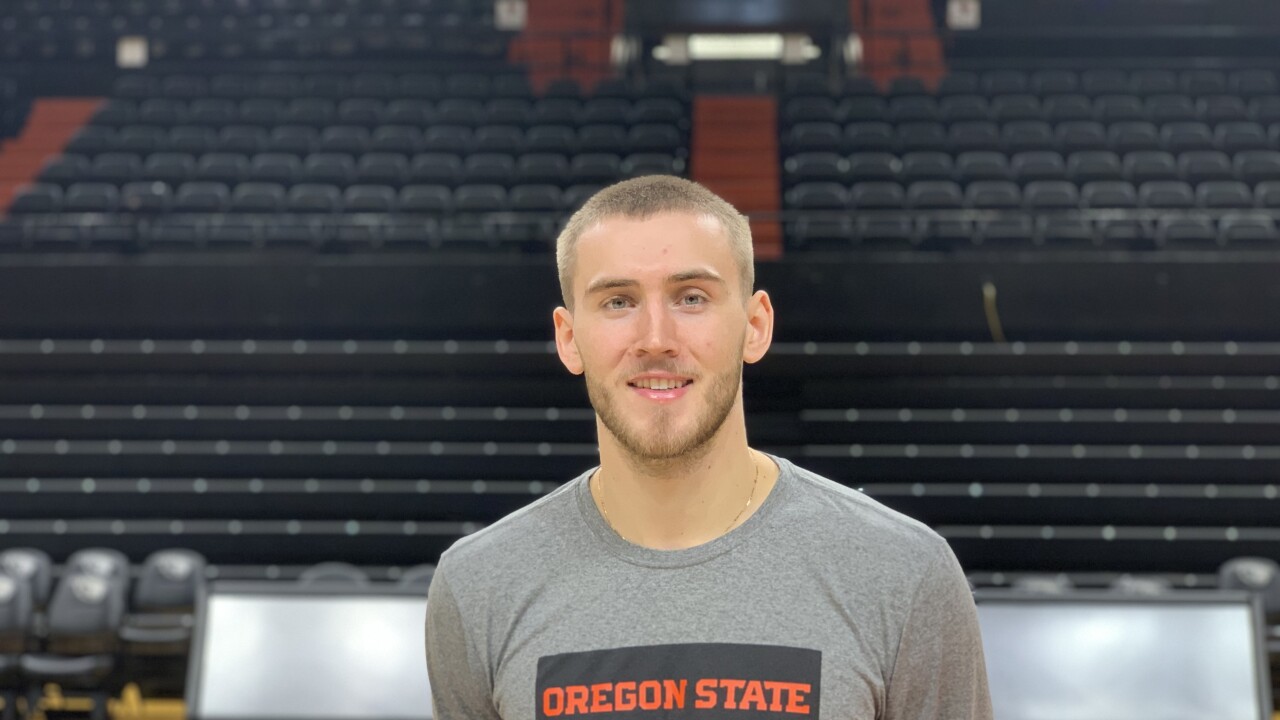 Back in 2016, the Oregon State Beavers were practicing the night before taking on the USC Trojans in Los Angeles, their second-to-last regular-season game of the year.

Tinkle was drawing up the practice plan and had a rebounding drill on the list. But for some reason, after writing it down, he crossed it off.

But then, he changed his mind again, and re-added the drill, knowing full well he didn't want his team to get soft on the boards.

"At the start of that practice, we're doing the drill, and (Tres Tinkle) went for a hard box out and his foot stepped on top of his teammate's and he went down," Wanye recalled. "I thought initially it was a tweak of the ankle and he gave me a look like something was wrong."

And it was. Upon a further X-ray, Tres found out he broke his foot on that drill, ending a promising true freshman season with the Beavers. He missed the final five games as OSU went on to make the NCAA Tournament for the first time since 1990.

It was a challenging and tearful ending to something the younger Tinkle had dreamed about his entire life.

It would be the first of numerous physical and emotional challenges Tres would be forced to overcome during his college basketball career. And now, four years later, Tinkle sits just 20 points away from breaking Gary Payton's all-time scoring record at OSU.

"It's been an awesome place to play and just mature as a person and develop. But things like the scoring title here are all great things to look back on and see that you had, especially when you're passing a player like Gary Payton," Tinkle told MTN Sports. "That's very special, but for me it's about winning and trying to turn the program around, because I don't think there's really been a winning team since he was here in 30-plus years. So, just want to leave my legacy as my dad's first recruiting class just to get this place going in the right direction and to turn Oregon State into a winning program where it once was and then just kind of leave it at that."

He was a prep star almost from the start at Missoula Hellgate High School. As a sophomore in 2013, he led the Knights to a state championship, a game in which he knocked down a challenging layup just seconds before the buzzer to send the game into overtime. He ultimately became Hellgate's all-time leading scorer, until current Knight senior Rollie Worster surpassed him just a few weeks ago.

Then, he took his talents to Corvallis to play for his father. And though the injury derailed his freshman year, he was ready to take the Pac-12 Conference by storm as a sophomore.

After playing in the first six games, Tinkle broke his wrist and missed the rest of that season. It was then he said he considered giving up the sport altogether.

"I remember being in the car with my mom and telling her I want to quit," Tinkle said. "Just what’s the point of me putting everything I have into this game and then just getting hurt and not even playing? And she’s always told me that’s not me, that’s not what our family is about.

"I think nothing worth having comes easy. So I just kind of kept my head down and just kept working, and it's gotten me to some pretty unique places."

So he stuck with it and achieved first-team all-Pac-12 honors the following season. He replicated that a year ago and is on track for a third straight honor this season, as well. Recently, he also broke OSU's record for consecutive games scoring in double digits.

"The biggest thing for me is just Montana tough is always in the back of my head, so I just try to take what I’ve done and hopefully be a platform for others to follow their dreams, as well," Tres said.

But what has also has made Tinkle's career unique is just how long he's been under the microscope as a player. His father's head coaching career began in 2006 at Montana while his two older sisters, Joslyn and Elle, each were standout prep players themselves before embarking on college careers at Stanford and Gonzaga, respectively. His mother, Lisa, is in the Grizzly Athletics Hall of Fame after a decorated career with the Lady Griz.

As the youngest in such a prominent hoops family, expectations were high and the scrutiny close when he was the standout high school player whose father was the Grizzlies' coach to now being the star who plays for his dad at a Power 5 university.

“The one thing is he hasn’t let the pressure get to him," Wayne said. "He’s still been very true to himself. There’s times when I know that it’s probably felt like that weight of the world on his shoulders. He’s very headstrong and that makes me proud because that’s not a trait I had. Wish I had. But to see how he’s kind of juggled being under the microscope or in the spotlight here on campus, being the head coach's kid, having the success he’s had, and not letting it take away from who he really is really warms our heart.”

“I feel like I’m a person that thrives off pressure," Tres added. "I love it because I love a challenge. I want to do what people say I can’t do and prove them wrong and kind of make them eat their words. It’s how I’ve always been with sports or school. A puzzle, like I want to finish it."

Basketball was never forced upon the Tinkle children and Tres even said Wayne wanted him to play baseball as a kid. But Tres ultimately fell in love with basketball and followed in the footsteps of his siblings and parents.

"Just seeing the success my sisters had I didn't want to be the weak link," Tres said. "So that's what really drove my work ethic. So never any pressure because I accepted the challenge and I knew what it took because I had some great role models."

But there were still challenges for both Tinkle men who now had to find the delicate balance between a player-coach relationship to their normal father-son one. And there was growth to be had there, too.

"It just shows you what perseverance and resilience he's all about," Wayne said. "There were a lot of emotional nights. Even before the injuries just our relationship as player-coach, father-son. And we've had to work through that. He had to get a lot tougher and grow up and I had to learn that, if I was going to criticize him as much as everybody else, I had to praise him as much as I did the others, and I wasn't doing that in the first couple of years."

"He saw dad's criticism coming from dad instead of a coach's aspect," Lisa added. "So getting through that was hard and they're in such a good place right now. Wayne is able to coach him hard and Tres is able to listen and take that coaching and use it as constructive criticism. They've both matured in different areas.

"I’m really proud of him. Tres has never been one to shy away from hard work and I think that’s what I admire about him most. Even as a young kid if he had a goal he would do anything he could do to achieve it, and his expectations are high and he demands a lot of himself, and he just never shies away from hard work, so I feel like he’s deserved everything he’s gotten.”

While his college career now winds to a close, it's not just bittersweet for Tres, but for those in his inner circle, especially those who know just how challenging some of those moments were.

But in reflection, his parents gush with stories about his character and the kindness he showed to others as a kid. For his sisters, they said watching him mature as an adult and a player has been special to watch after seeing everything he's done and gone through to get to this point in his life.

Tinkle will likely find a career in basketball after the buzzer sounds in his final game with Oregon State, but that won't make that moment any less emotional for those who have been there every step of the way.

"We were just talking to somebody not too long ago about what the feeling is going to be like when it’s his last home game and the buzzer goes off," Elle said. "I think all of us get choked up. How are we figuring out how to get him a sixth year? It’s going to be totally bittersweet because obviously we hope and we’re pretty confident that he’ll have a successful career maybe after this, but just getting to be present at almost every single game over the past five years has been so special."

“I’m just glad that he learned everything from me," Joslyn added with a laugh. "It’s been so awesome. We’re all very supportive and a pretty tight-knit group, and I think the coolest thing for both of us, but for me, is seeing him achieve all these accolades and accomplishments but knowing what’s gone into it behind the scenes. He’s just worked his tail off. He is the hardest worker I know.

"We’ve been really fortunate to have him for five years and seasons and to watch that bond with our dad and brother and all of us be present in all of those moments. It’s been really, really special."