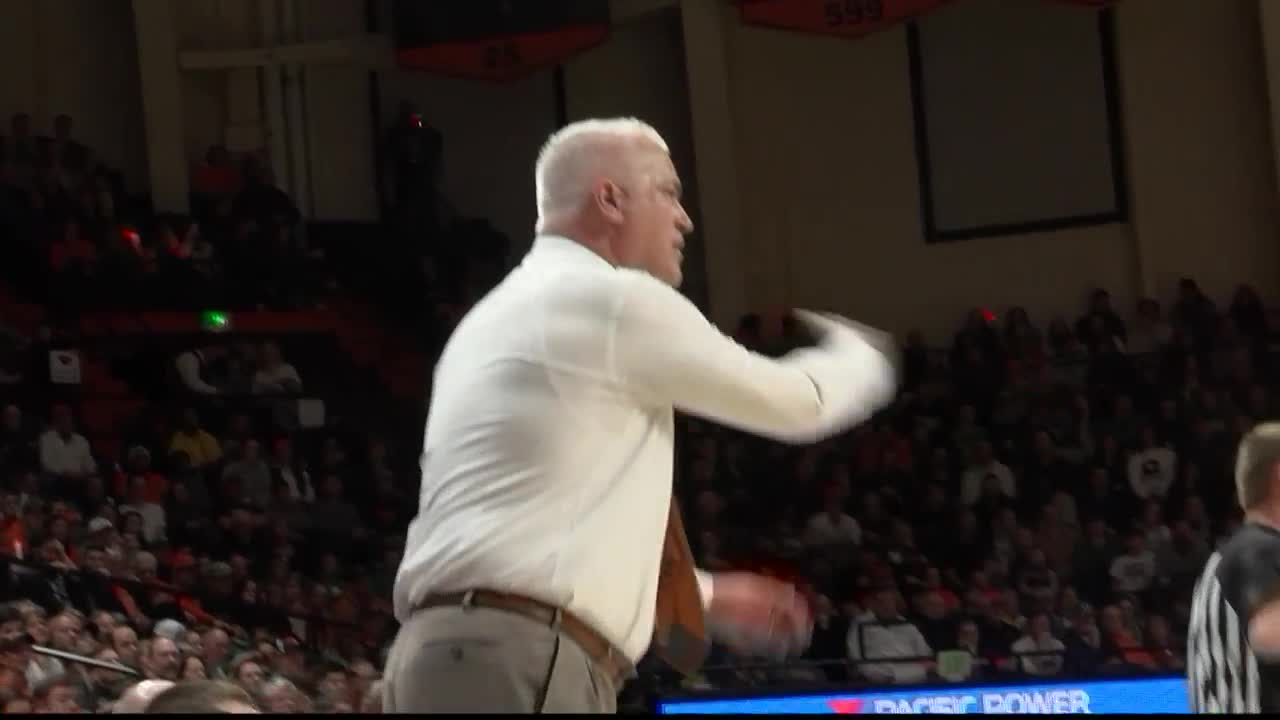 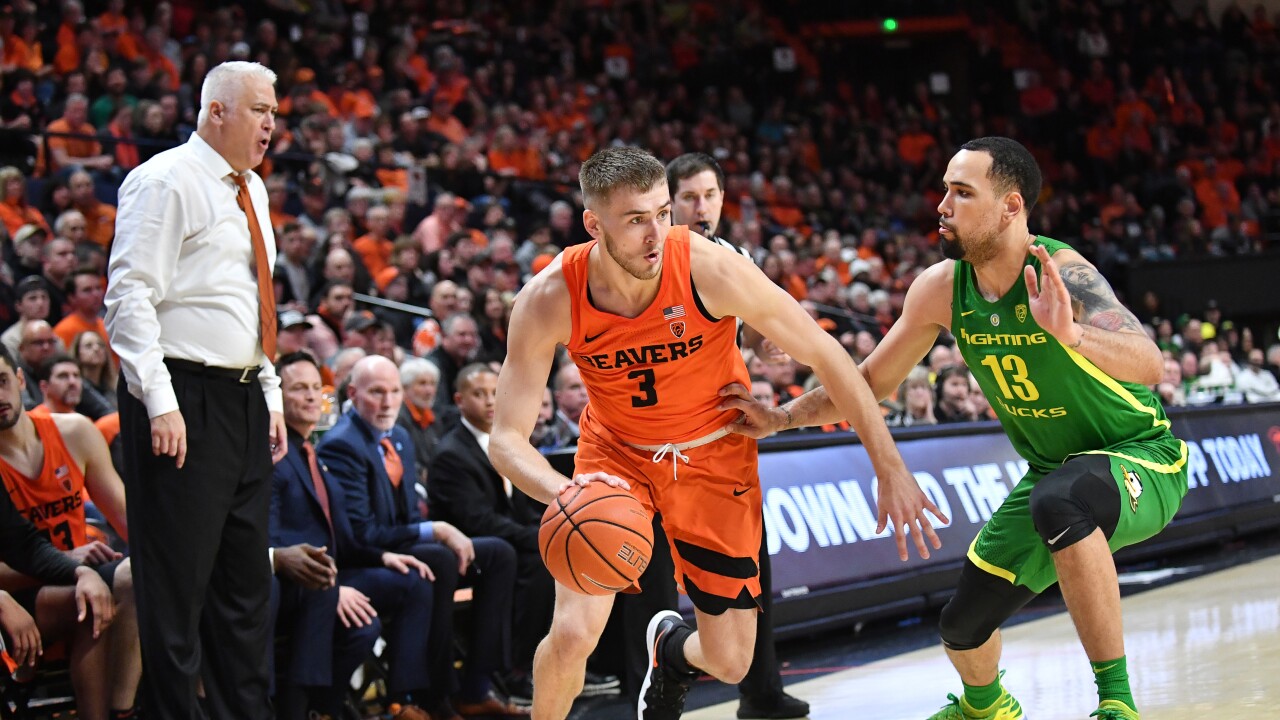 Sitting at the Oregon State basketball practice facility on Feb. 6, Tinkle was asked if it sounded weird when reminded it had been six years since he was coaching the Montana Grizzlies, his alma mater and a school he spent 2001-14 at as both an assistant and the head men's coach.

A fixture in Griz basketball, it is hard to believe six years have passed since Tinkle traded maroon and silver for OSU orange and black.

But in the midst of another year with the Beavers, and the final season of coaching his only son Tres, Tinkle and Oregon State are making a late push for an NCAA Tournament bid as they aim to make it back for the first time since 2016.

There have been plenty of ups and downs in Tinkle's tenure at OSU. In the 24 seasons prior to Tinkle taking over the men's program, the Beavers had just two winning seasons total. In five years under Tinkle, the Beavers have been over .500 three times and currently are on pace for a fourth season to reach that mark.

The NCAA Tournament appearance in 2016 was the first time OSU had made March Madness since 1990, snapping a 26-year drought.

There was OSU's injury-riddle season in 2016-17 when the Beavers went 5-27. And this year's team had high expectations, but low shooting percentages have made life tougher on the Beavers than anticipated in conference play. Still, Tinkle has found a niche in Corvallis, similar to the one he created in Missoula.

But he'll be the first to tell you that the transition from the Big Sky Conference to the Pac-12 was far from smooth.

“It was tough at first because we were so rooted to Missoula and the state of Montana," Tinkle explained. "It was like, 'Man, we were so comfortable there, we were having success there, did we make the right decision?' So there was a little bit of that and I remember talking to (former Griz player and coach and current Utah coach) Larry Krystkowiak, he said, 'You’re going to be drinking out of a fire hose basically for the first six months,' and it’s a similar talk when I got the job at Montana. But he’s like, 'You’ll settle in, you’ve got plenty of experience and you’ll be fine, but just get through the first six months and then it’ll be second nature to you.'

"We feel like we've kind of got things going, we've got things cemented. Now it's, 'OK, from here we've established that culture, now let's get to the postseason year in and year out and do some great things.'"

In a larger conference like the Pac-12, changes were needed. OSU's struggles were evident before Tinkle arrived. But even among those changes, Tinkle's family says they see him use a similar style with the Beavers that he did with the Griz.

“I don’t think he’s changed a lot," said Lisa Tinkle, Wayne's wife. "I think he still coaches with that same vigor and competitiveness and fire. He enjoys coaching that kind of tough, hard-nosed athlete that kind of has a chip on the shoulder, but he’s still the same fiery coach with the silver hair.”

“Obviously we’re biased so we think he’s the greatest coach that’s out there, but just how he transforms these players," said Elle Tinkle, Wayne's daughter. "He says it all the time, developing them to be good husbands later in life and good employees, and so there’s so much more that goes into just evolving a player, but really just the person, and he’s really committed to doing that.”

And a lot of that has been approaching the job at Oregon State similar to Montana.

“He’s really made Corvallis, too, where like Missoula, he played there, we grew up there, so he really had that community behind them," added Joslyn Tinkle, Wayne's oldest daughter. "He was also able to do the same thing here at Oregon State and Corvallis. He really loves this job and this college and wants everyone else to feel like they’re a part of it.”

And that has come with coaching Tres, as well. The two have grown over the years together, but it was another growing lesson for both Tinkle men.

“It’s been challenging. Early on I think it was more of the struggles of me growing up and having to get used to him getting after me and yelling at me, but then also him not being afraid to praise me just in case of what my teammates are thinking, so it was kind of a two-way street," Tres said. "But I definitely knew I had to mature as a person and be able to take his criticism. And he knew my goals, so he knew he was going to push me and hold me accountable, but the past couple of years have been great. We’ve been there for each other. I have his back to the end, as he has mine.”

But while Tinkle's focus is on Corvallis and OSU, reminiscing about his time in Missoula brought a smile to his face, allowing him to relax for a moment during the busy stretch of the season, knowing just how much it meant to him and his family. Just two days later, OSU would beat No. 14 Oregon 63-53 in Corvallis.

"The thing I really like is, it meant so much to Lisa and I to now see how much Montana means to our kids," Tinkle said. "How they want to go back there tells you you were right and that you did a good job of translating that down to your children because they obviously feel the same way."

Along with the family and friends he misses, the food and restaurants in Missoula also come to mind. Hoagieville, The Depot, Paradise Falls and the Press Box were specific examples Tinkle gave.

Specifically with the Grizzlies, Tinkle also recalled good memories with some of his standout players like Will Cherry and Kareem Jamar, former coaches like Krystkowiak and former Lady Griz coach Robin Selvig, while throwing kudos to current UM coach Travis DeCuire for the recent success the Grizzlies have had. He added that seeing Bobby Hauck back with the Griz football team "just feels right."

And that visit back in 2019? It was to officiate a wedding near Alberton for the first time in his life, something he's not sure will happen again, though he says he enjoyed getting to be a part of that experience.

But in the here and now, Tinkle's new family feel is with the Beavers, but his memories of the life he built before won't leave anytime soon.

"It's not about our family, this whole deal is our family," Tinkle said, gesturing around the OSU practice gym. "But to have my wife and children be a big part and really believe in what we're doing and believe in Oregon State to the level they do when one played at Gonzaga (Elle), one at Stanford (Joslyn), they're Oregon State Beavers through and through, and that means a lot for me and I know it does for Tres, as well.

"Montana's always going to have a special place. We still have a lot of people that reach out to us and send their love and support. It means a lot because we got a lot more from Montana than we gave, but we still feel entrenched there."