Joslyn and Elle Tinkle finding success in life after basketball 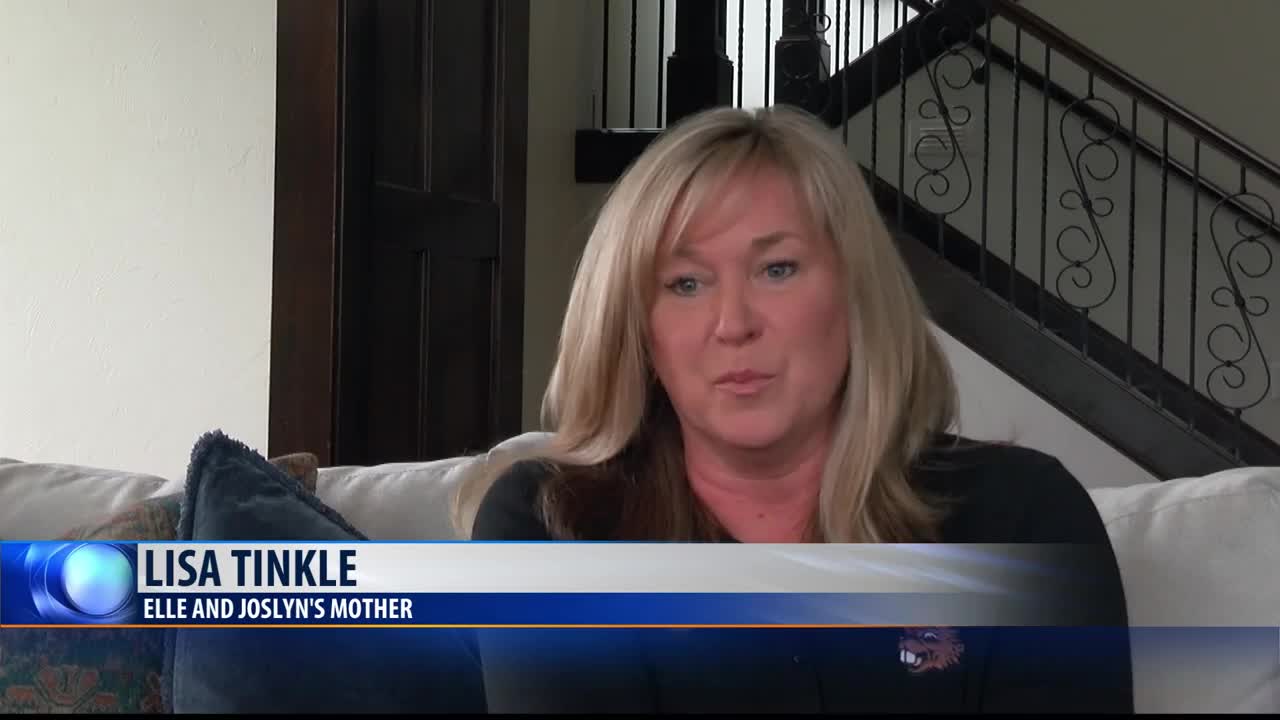 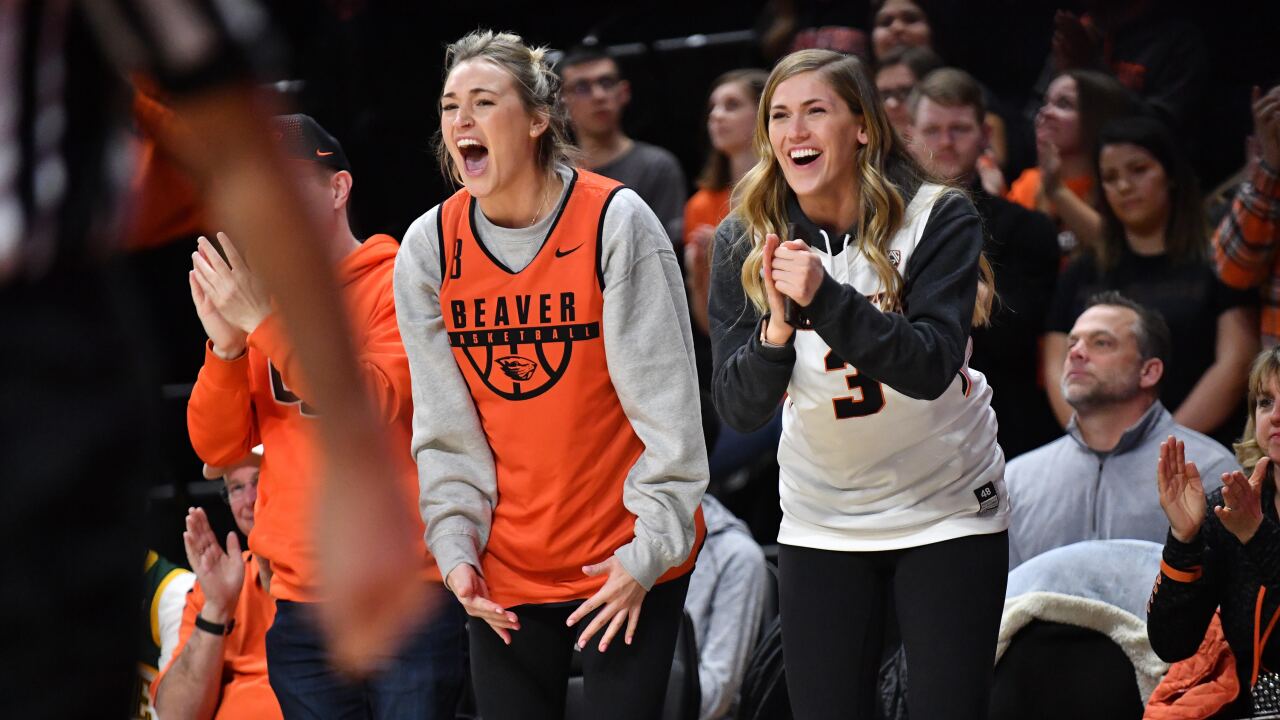 PORTLAND, Ore. -- The pressure of playing a sport in front of thousands of fans can be rigorous, stressful and challenging, especially in the postseason.

For Joslyn and Elle Tinkle, sitting in the stands as fans outweighs the stress they experienced as players. Why? Well, when your father (Wayne Tinkle) is the head men's basketball coach at Oregon State University and your baby brother (Tres Tinkle) is the star player, worrying about their success turns into the focal point, especially now that the two Tinkle sisters are done with their playing days on the court.

"It’s so much worse," Elle Tinkle said with a laugh. "It’s so much harder just being a fan, I’ve realized, than when we got to be a player. And now us being so invested having a dad and a brother part of the same team, for me I feel like it’s more stressful because we can’t control anything from the sidelines"

"I definitely get way more nervous for their games than I ever did for mine," Joslyn Tinkle added. "I think, yeah, you have more control when you’re on the court and it’s you, but, again, you have two different components out there and us being as tight-knit as we are and very protective and supportive, it’s hard to kind of keep those emotions in, but it’s been really fun."

But such is life for the two sisters who are a pair of the most decorated basketball players to ever come from the state of Montana. And sitting in their home in Portland, Oregon, just an hour and a half north of OSU, the sisters caught up with MTN Sports about what life has been like in recent years since they hung up their basketball shoes.

After standout careers at Missoula Big Sky High School, Joslyn and Elle went on to two prestigious universities to continue their basketball careers. Joslyn attended Stanford after winning a pair of Gatorade player of the year awards at Big Sky. She was a McDonald's All-American coming out of high school, went to the NCAA national championship her freshman year and two Final Fours the years after that before exiting in the Sweet 16 in her senior season. Tinkle started the majority of Stanford's games as a junior and senior and the Cardinal won 137 games in her four seasons there.

Then, Tinkle went on to play briefly for the Seattle Storm in the WNBA before playing three seasons overseas in Hungary, Turkey and Australia.

Elle Tinkle, meanwhile, was a three-time all-state selection with the Eagles before taking her talents to Spokane, Washington, with the Gonzaga Bulldogs. Like her older sister, she became a staple in the starting lineup in her junior and senior seasons and went on to be the first women's basketball player to graduate from the school's rigorous nursing program, as well.

Elle opted not to pursue a career in professional basketball, saying some burnout was a factor, but that she was ready to see what awaited her in the professional world.

Now living together as roommates, Elle works as a nurse while Joslyn does sales and marketing for a wine and spirits company in Portland as well as entertaining the idea of potentially jumping into coaching. Elle also began school at Georgetown University just more than a month ago as she is studying to become a nurse practitioner.

And both are plenty used to life off of the court.

"For me, I think it was really difficult because it was like, what do I do?" Joslyn said. "I think a lot of athletes are given really rigorous schedules and it requires a different kind of discipline and work ethic that translates over to real life and real world, so it was hard. But you kind of realize we can do this."

"I think, for me, I kind of already had a clear expectation of what work looked like," Elle said. "With school I had to do clinicals so just getting to already be in the hospital I think that’s what ultimately made me want to move just right to the job first than having to play overseas. It’s just because I knew what it looked like and it really excited me, so little bit of a different experience, but I think that kind of benefited me, as well."

And of course, they attend almost every home and away Oregon State men's game to support their brother and father. Knowing they could be there to watch Tres grow and support Wayne was another factor as to why both cut their playing careers short after college.

“It’s a nice reflection on them that they want to support their brother," said Lisa Tinkle, their mother. "They’ll protect him to the end and it’s important for them that they put their lives on hold so that they could support him and come to the games and watch his career unfold.”

“I’m always in their ear talking mess to them, but at the end of the day I think it’s so cool to have your siblings be there and support you and be your No. 1 fans," Tres added. "They know my dad’s concepts and philosophies better than probably half our team. Someone might be out of position and they’ll say the term for them and remind them. They know what they’re doing, they know what they’re talking about and they just love the game and they want to see both of us win and succeed, and I don’t think you see that very often.”

And the Tinkle sisters have been noticed, with occasional videos going viral of the two celebrating a big basket from OSU. Tres said his favorite part is them calling refs by their first names and the handshakes they have to hype each other up.

"We were talking about this and making fun of them when a player might look at them after they hit a 3 (Joslyn and Elle) go, 'Why are they talking mess to us?' and I was like, 'Because you are the loudest ones in the gym,'" Tres said. "They act like they're so innocent, and they're the loudest ones in here so they're going to get attention.

"Honestly it’s kind of crazy that it really has become kind of this big thing," Joslyn added. "I swear every game we kind of go into each game, 'OK, Elle, let’s just be calm this game,' and we can’t. I think it just goes into the fact that we’re on the other side of it and we get so nervous because we’re double invested. Again, we’re very protective of our baby brother, our family, our dad. We just want to see them both and their team succeed.

"I think coming from a basketball family we know everything that goes into it and it is so hard for us to be calm, especially for me. I’m very vocal. I’ve joked and said, 'Dad, you need to put us on the payroll, because we’re coaching from the other end,' and he’s got that side covered, so it’s fun."

Elle added, "Nothing’s planned, that’s why it looks so chaotic."

While Wayne will give them the occasional joking threat that he's going to move their seats into the nosebleeds, he's appreciative of the support his two daughters have brought him and Tres.

"We're a close-knit family and they wanted to be here to support Oregon State, their father's team, and then their brother, as well," Wayne said. "They create quite a spectacle, but it's fun having them there.

"Win, lose, draw, to be able to go home afterwards, it's great to have them right there at our sides through this all and that's what we hope to do for them when they start to move on."

The two admit there were nerves when the idea of life without playing basketball on the court began to come forward. But they've made the transition smoothly as they've navigated the next steps in their lives, though they do miss their playing days at times.

But thanks to their challenging schedules as student-athletes and their ability to overcome obstacles, the two felt well prepared once they moved on from the game they both dedicated so much time to.

“I think, especially for me, because I decided not to pursue basketball after college and we had kind of dabbled with the idea of maybe taking a year of playing together overseas, so I think my biggest regret was, I’m going to get three or four months into this and then suddenly, 'What was I thinking? I really miss it,'' Elle said. "I think that always kind of hits you after you hang the shoes up, but so far I haven’t regretted it and it’s allowed me to watch Tres all five years."

"You miss literally the blood, sweat and tears of it every day," Joslyn added. "Not that I feel like I ever took it for granted going through that process but once you’re out of it, and I was fortunate to play at some really high level after college, college specifically, nothing is better than that time. Those years when you’re there with your teammates and sisters and brothers for life, you really miss it.”