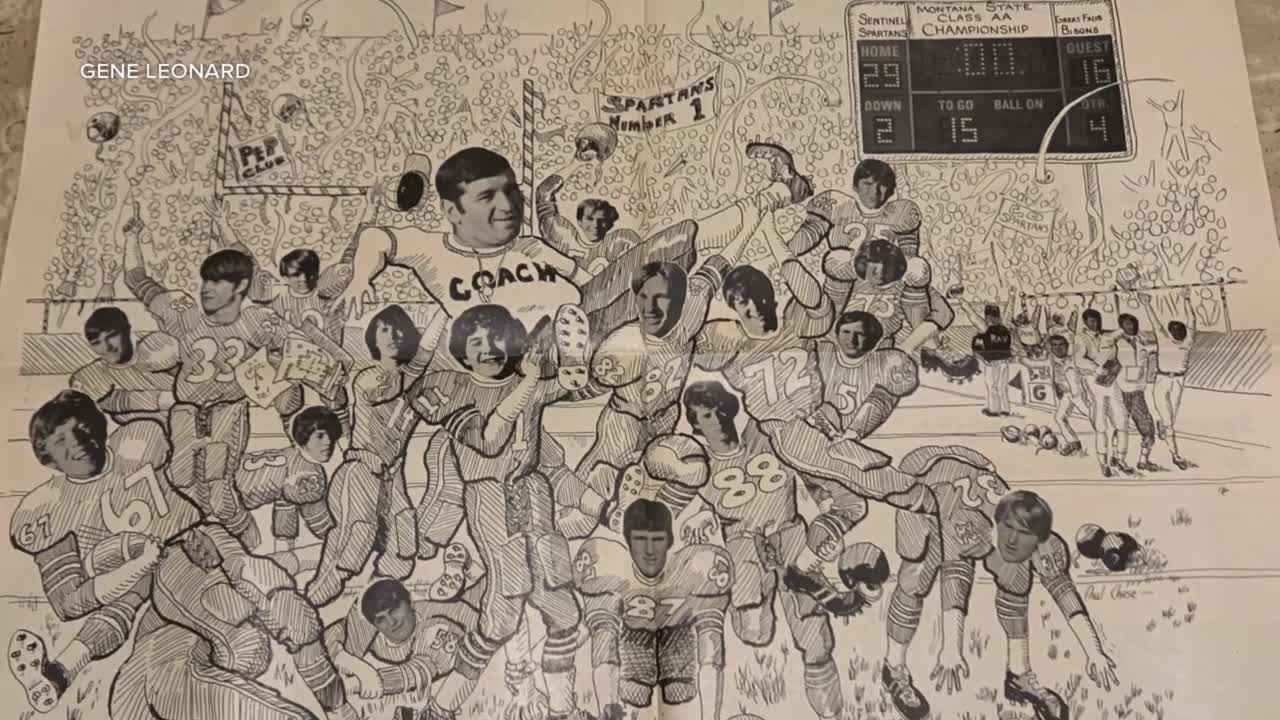 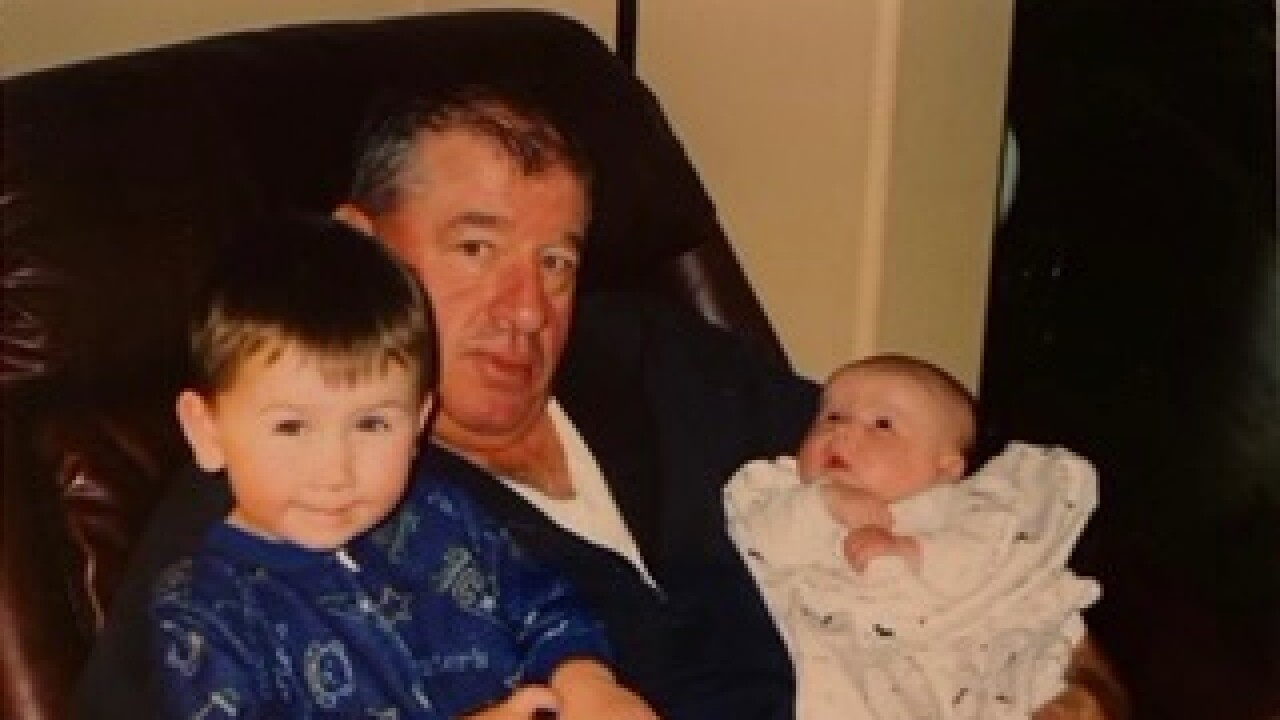 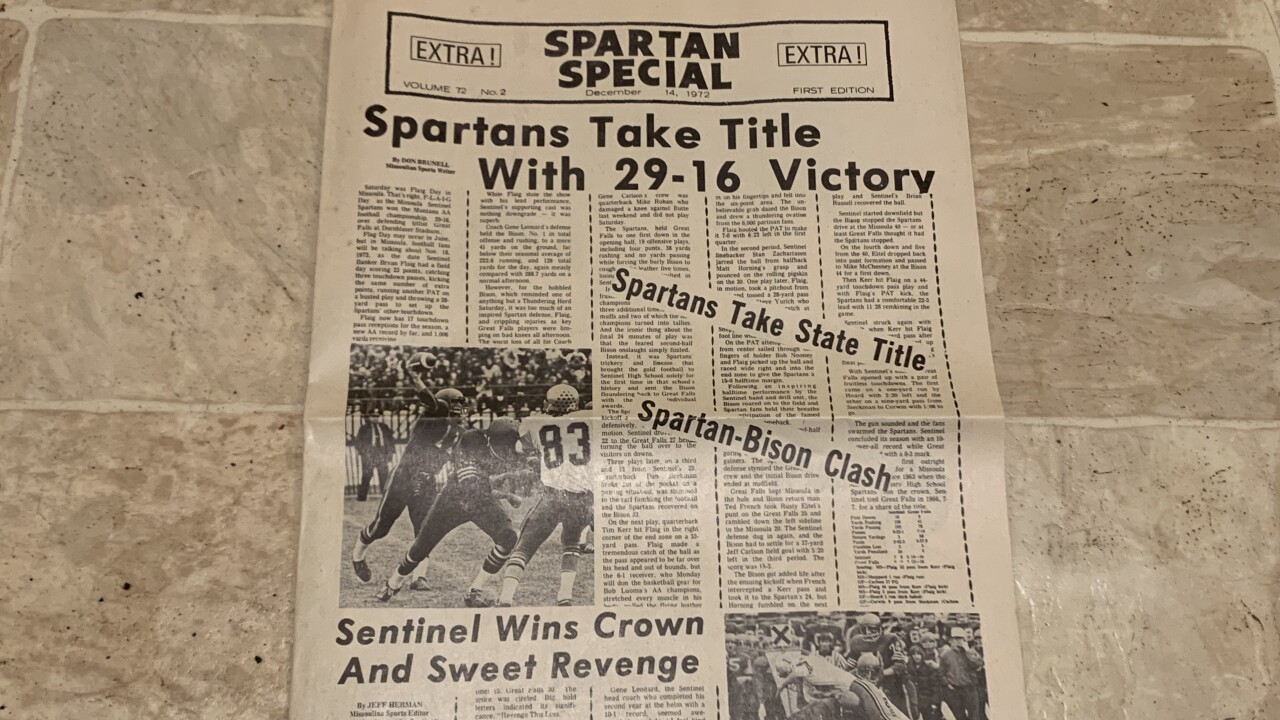 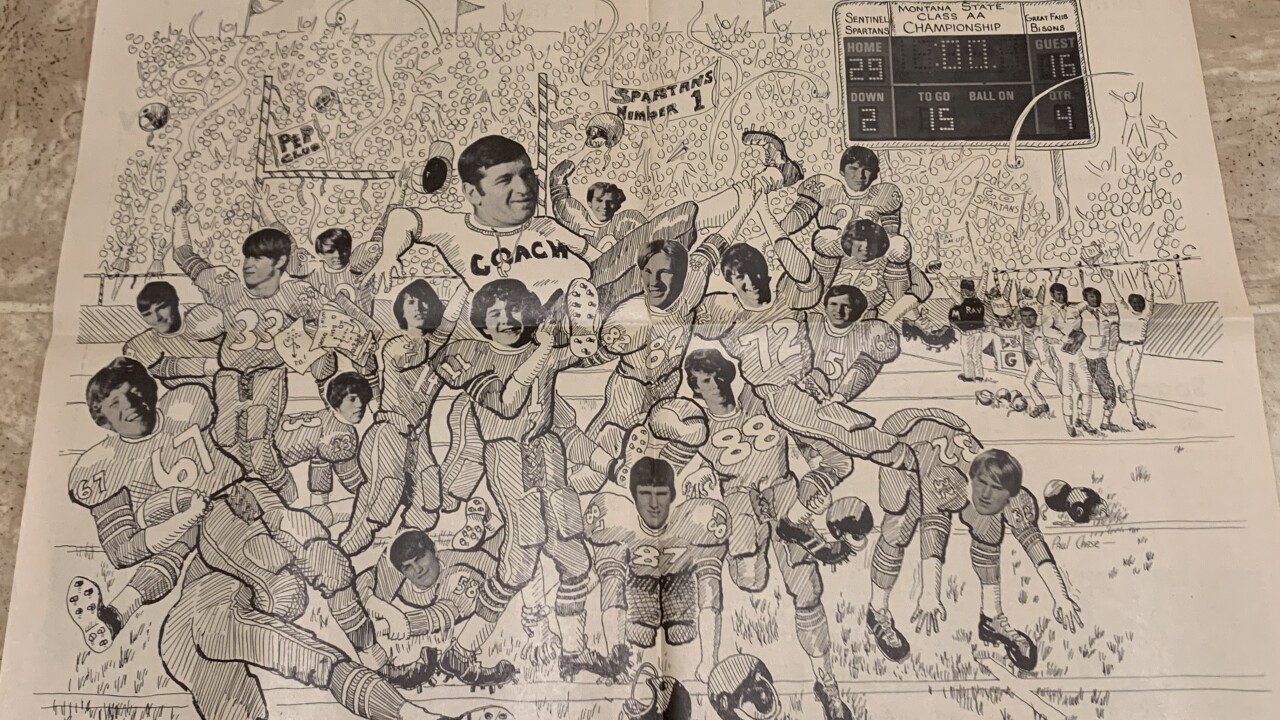 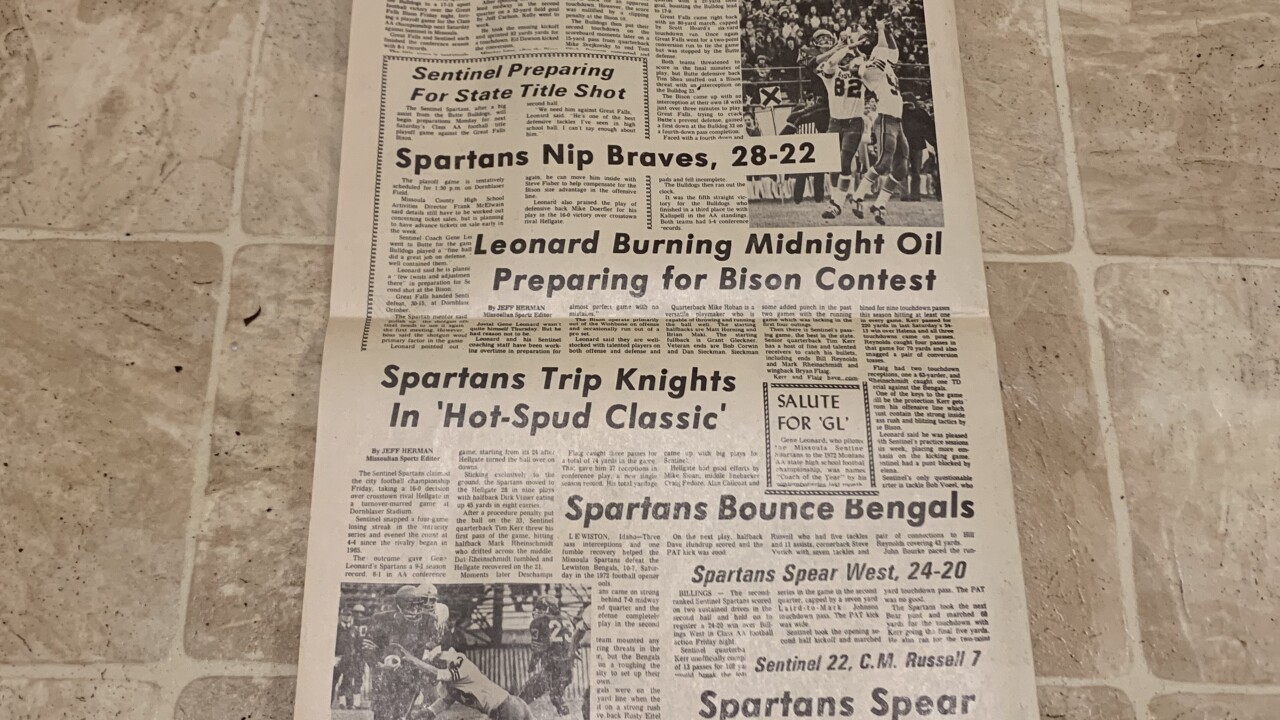 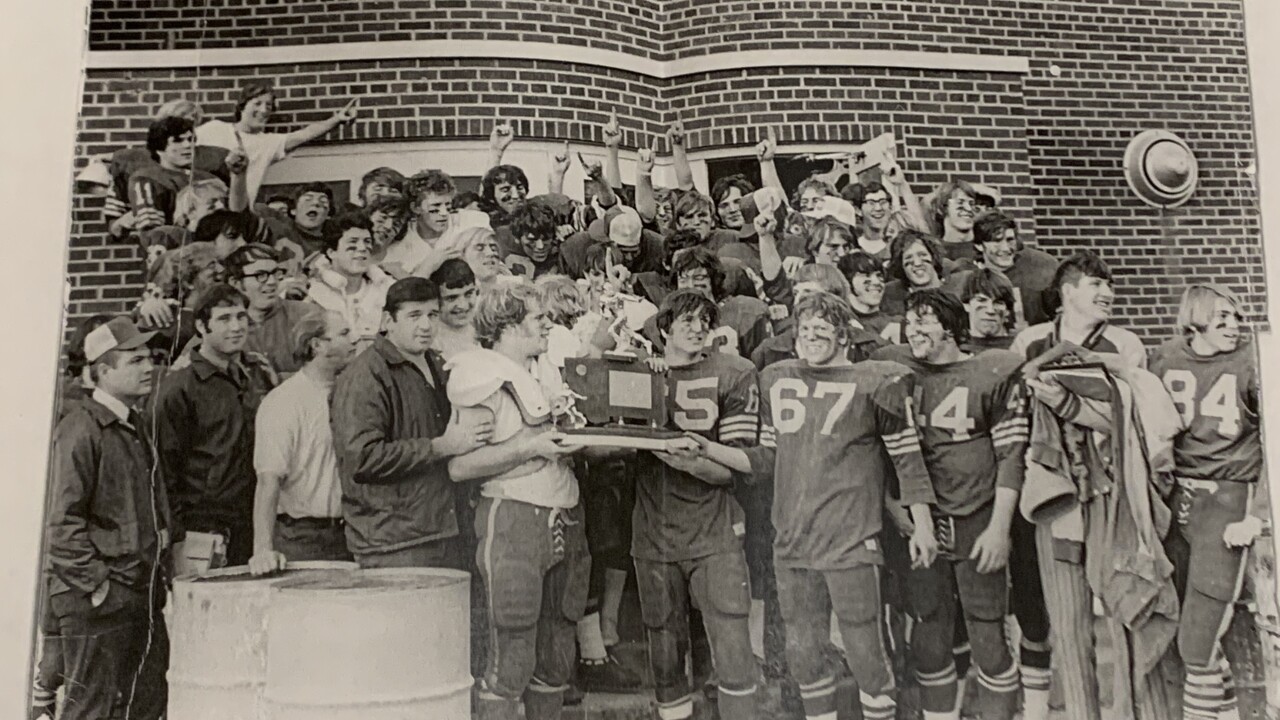 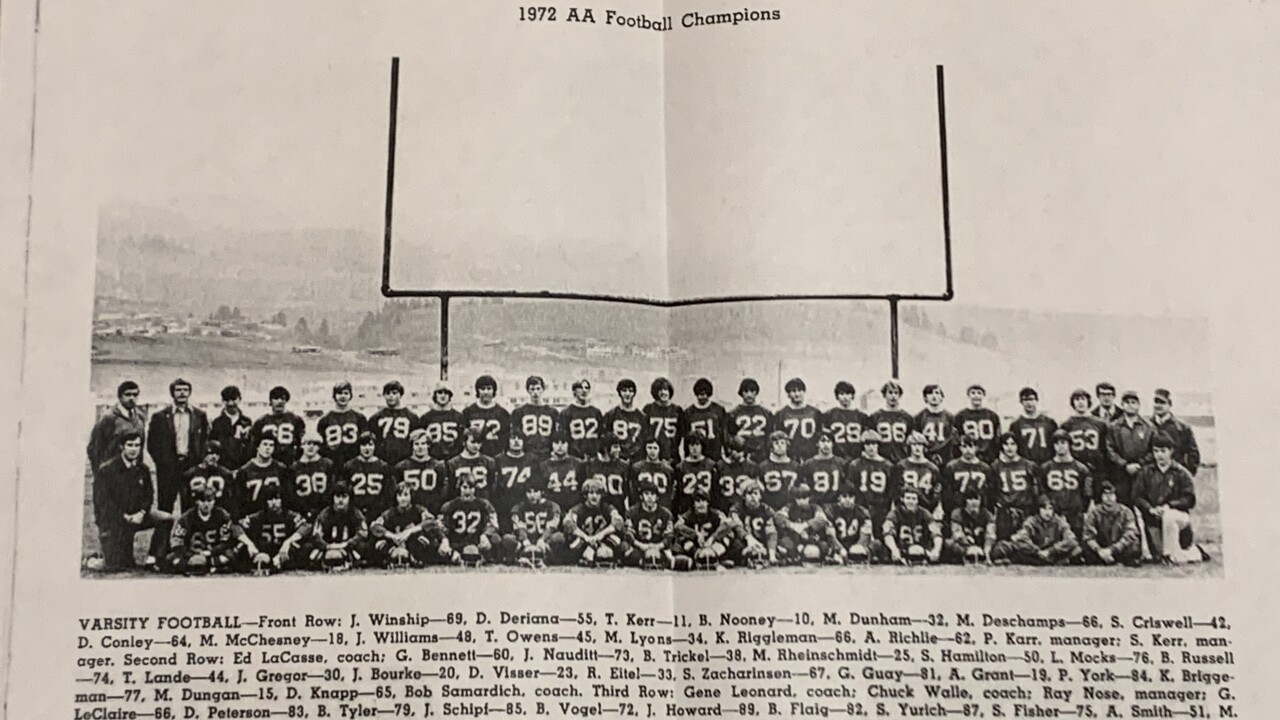 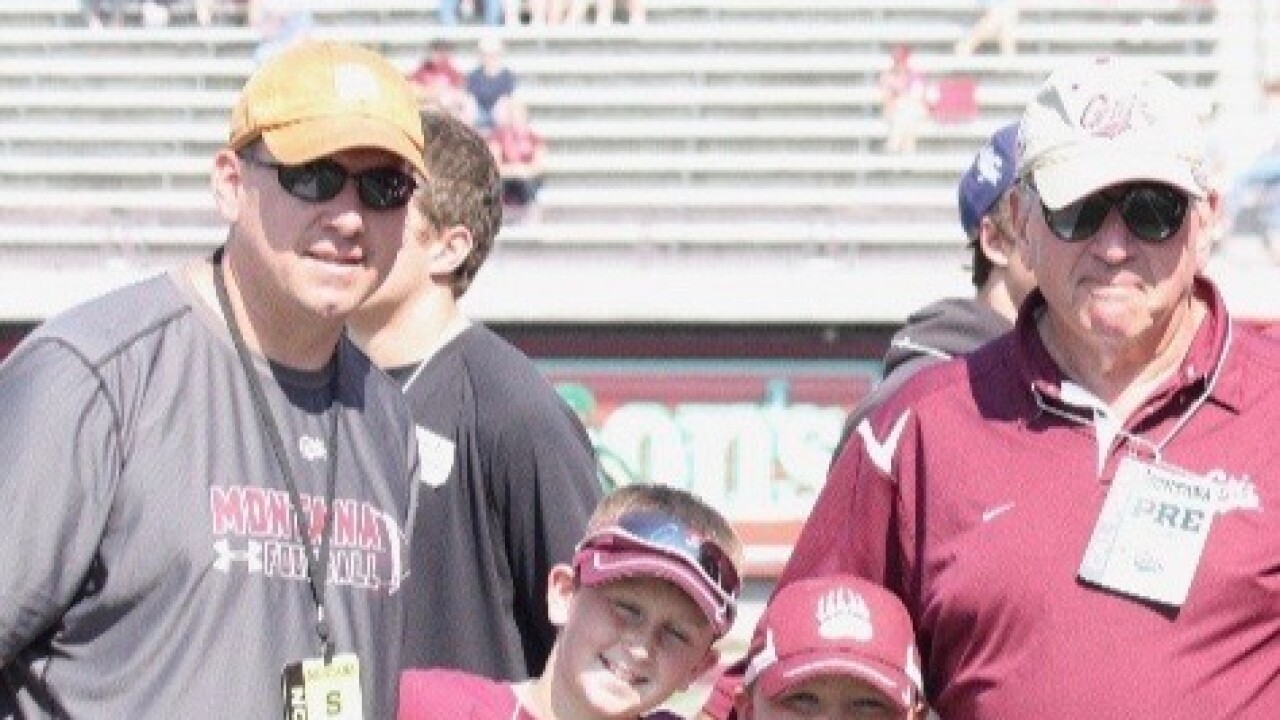 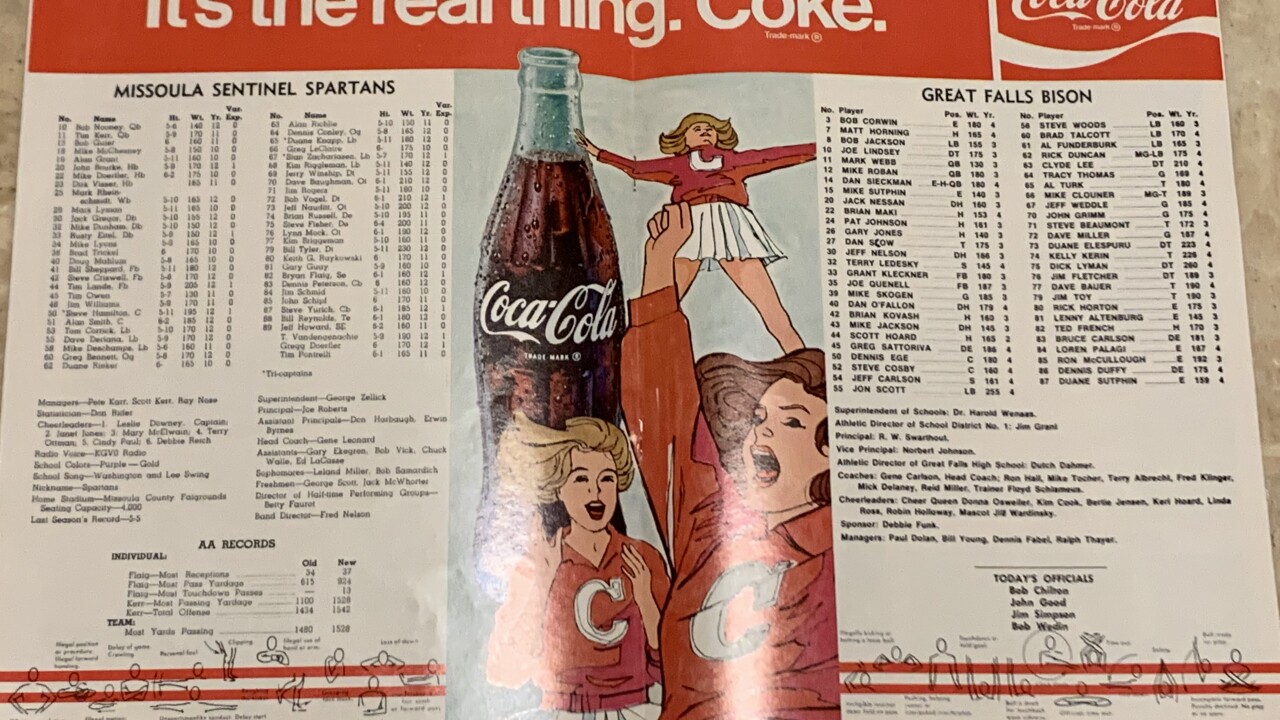 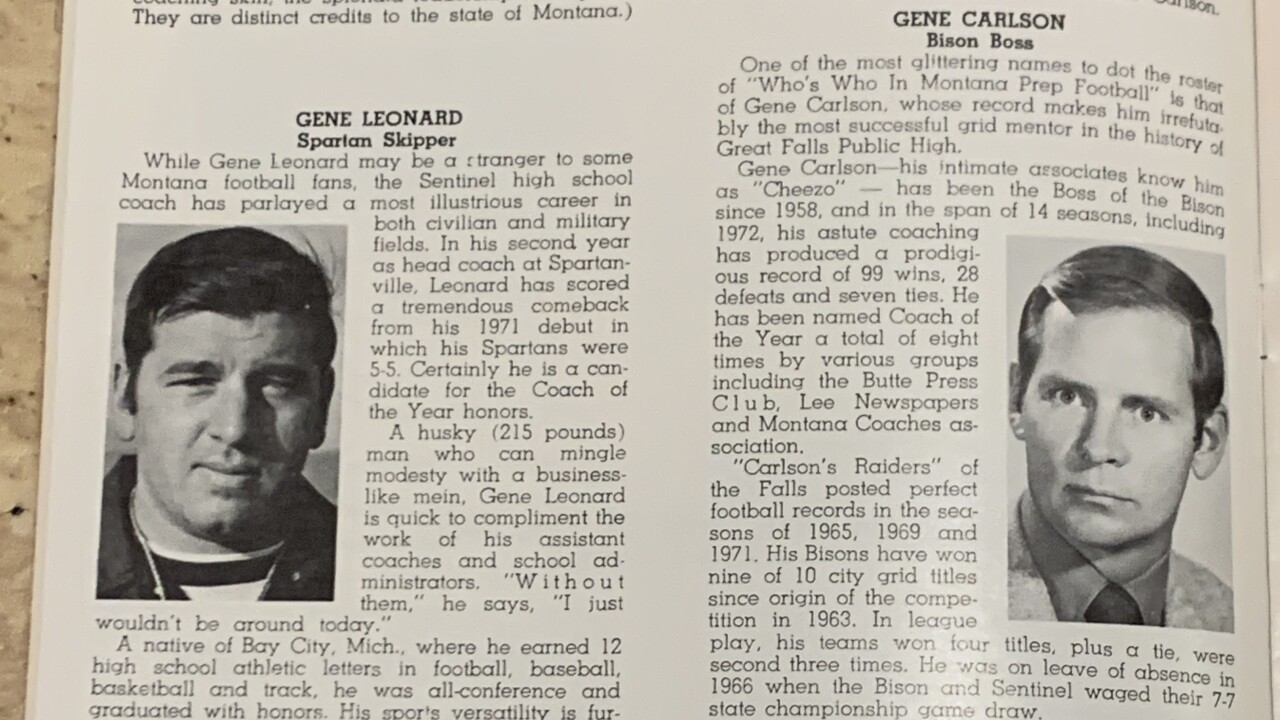 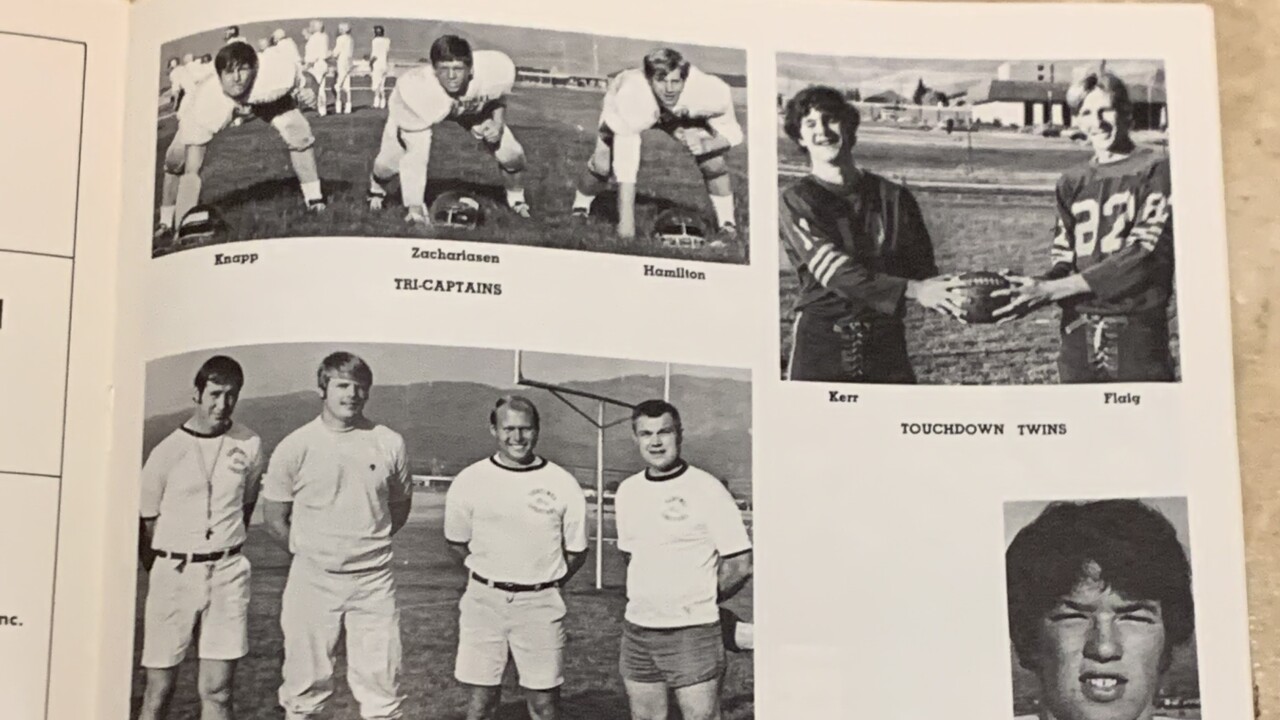 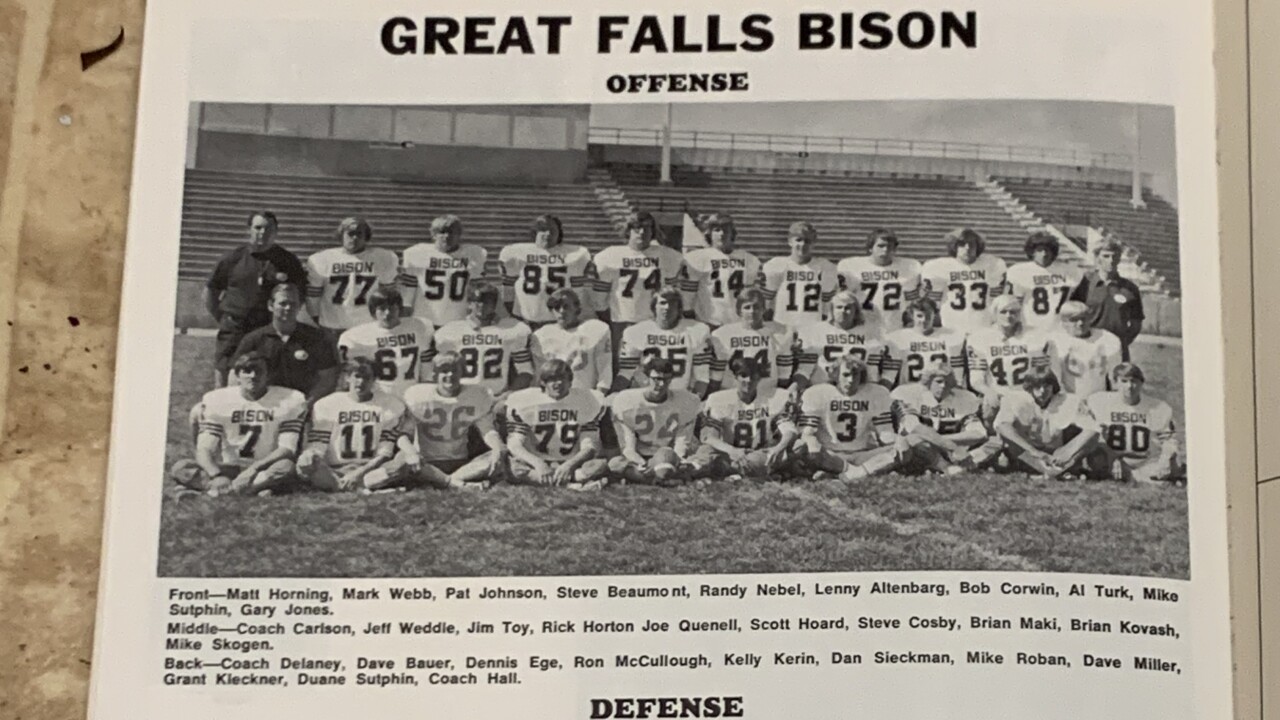 MISSOULA — The year 1972 lingers in the minds of Missoula football fans frequently this week.

Why? Well, just 48 short years ago, the Sentinel High Spartans were the kings of the Class AA football spectrum after a 29-16 win over Great Falls at Dornblaser Stadium.

However, that was the last time Sentinel reigned supreme on the football field.

This Friday, the Spartans aim to break that streak when they take on Billings West, and, in an all-too-perfect storyline, the game brings a family that bleeds Sentinel gold and purple full circle in its football lives.

Gene Leonard was the head coach of that 1972 Sentinel team. Now, his grandson, Geno Leonard, is a two-way star for the Spartans at center and middle linebacker and often dubbed the "heart and soul" of this year's squad as Sentinel chases glory once again.

"He fell in love with the game," Gene Leonard told MTN Sports about his grandson. "He has an open personality, he loves meeting people, he's upbeat, positive, enjoys life. He's provided some leadership, he's provided some rah rah. He likes everybody and everybody kind of likes him.

"I credit his mother and dad. My son (Brad Leonard) played at Sentinel as well and he played for the University of San Diego, so he was a good player. So he kind of grew up where grandpa was a coach and dad's a fanatic. Geno, I'm so proud of him."

Gene said while watching Geno grow up, he was worried about him being a shorter player and if it would impact his ability to play football, but he credited Geno for his work and determination as he grew into his current 5-foot-11, 220-pound frame.

Added to that is watching his grandson suit up for the 9-0 Spartans as they hope to make history and bring home the state championship trophy for the Spartans.

"I always thought about (the family legacy) going into high school," Geno said. "He's always told me stories of that game and my dad graduated from Sentinel in 1988, as well, so it's been super cool getting the tradition in that aspect on that side of it. You look back on the teams from the past and Sentinel has always had a super proud tradition, but it's awesome to have the opportunity to be in those ranks with my grandpa, but I can't be the one that loses it so I got to stay on the same level as him and be able to rub it in my dad's face."

So with more to Friday's game than meets the eye, Geno admitted his task is trying to keep himself calm and not nervous ahead of the contest. But he's proud to carry a family tradition as well as that of the Spartan program.

"I'm honored," Geno said. "My grandpa, you see him as a celebrity around town. Whenever I'm with him he's always talking to someone random. He'll bring up old buddies and old stories he has to tell. He'll say one day I'll have that opportunity to talk about these things I was able to experience with some of my best friends and my new family with this football team."

"There's a lot of ties all over this whole program," Geno added, alluding to assistant coach Troy Dennison's father, Tim Dennison, coaching Sentinel in 1984, the last time the school was in a state championship football game. "It's a great big family. I'm just excited to be a part of that group, and all my buddies and teammates, I think we're all thinking the same thing."

Originally hailing from Michigan, Gene Leonard played football for the University of Montana from 1960-63. From there, he was an assistant coach for the Griz freshman football team in 1964 before coaching as an assistant at Sentinel in 1965.

A graduate of the ROTC program, he was called into active duty in 1966 during the Vietnam War. He ultimately made his way back to Sentinel in 1970 and then was the head coach from 1971-73 before leaving to be the assistant principal for the next three years. He returned as head coach for a second stint and coached from 1977-81, marking eight years at the helm for the Spartans.

Following his career in administration and public education, Gene Leonard, 78, went into financial services, which he still does to this day. While reminiscing about his time in the early days of his coaching career -- and knowing Jack and John Elway personally during their brief time in Missoula -- Leonard said he sees similarities between the 2020 Spartans and the 1972 team, especially in their cohesion and coachability.

But Leonard wants this year's team to know just how special the 1972 title was to his team, and he wants nothing more than for this crop of kids to experience that same jubilation.

"I want them to know what that experience is like by those that look back at it after that period of time," Leonard said. "What I told them, I talked to the team last year, I said, 'You're writing your own history.'

"These kids are well-coached, they don't make many mistakes. They don't beat themselves and that's a sure sign -- jumping offsides, fumbling the ball, turning it over, that type of thing. They've been city champions a few times now. They're divisional champions. But the big enchilada is being a state champion."

Regardless of how this season concludes, Geno will follow in his grandfather's footsteps and play football at UM.

Due to fan limitations, Gene Leonard has not been able to see Geno play live this season but has been able to stream the games and still finds ways to offer support, coaching tips, and the occasional teasing.

"He's got a mop of hair on that head that I tease him about all of the time. I say, 'When are you going to get a haircut like mine?'" Gene joked. "I think, because I made fun of him, I think he decided to just grow it as long and thick as he possibly could. I just love him, he's just a fun kid."

"I get a text from him pregame and postgame," Geno added with a smile. "I'll get a text saying, 'Good luck. Play fast. Play physical.' Then the next day I'll get some coaching tips, like, 'Hey, we need to clean up those penalties, we got to do this, we got to do that,' but it's awesome still seeing the coach come out of him. It stinks with this whole COVID and not being able to have him at those games, but he's been cheering from home, which is awesome.

"Just wish he had the opportunity to watch this game in person, but hopefully we're making him proud at home."