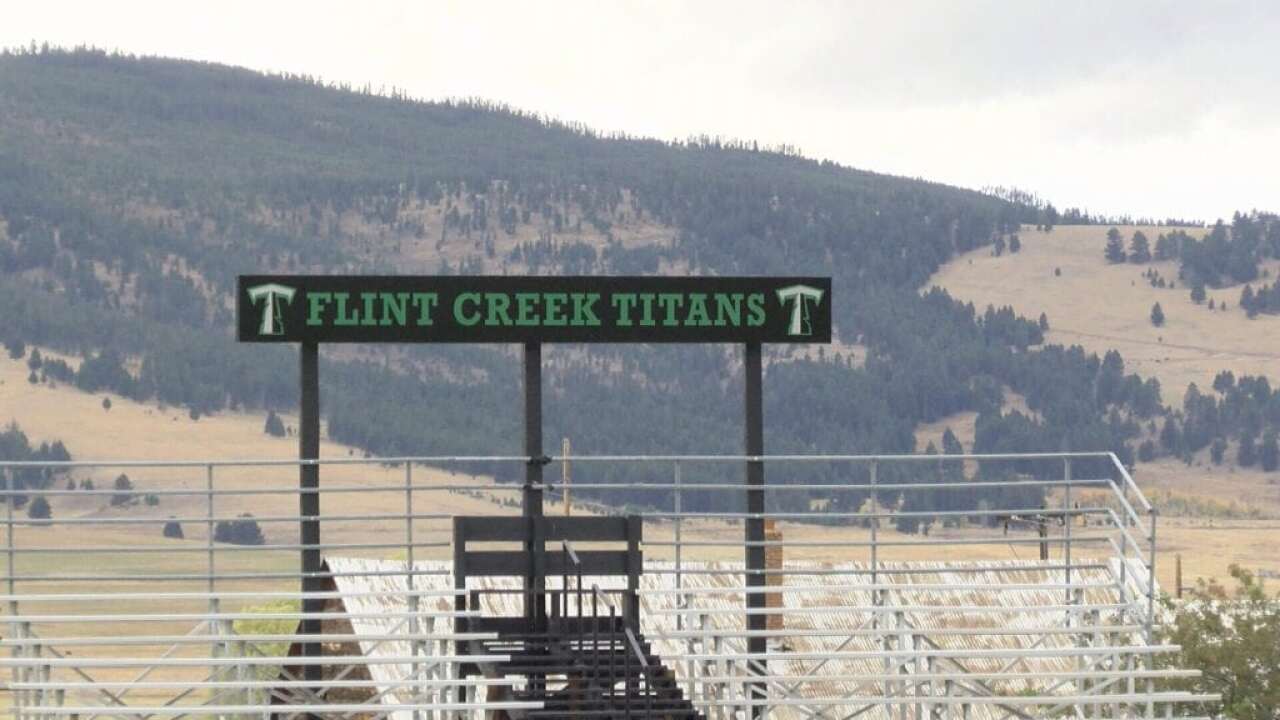 The Flint Creek Titans are on an 18 game win streak dating back to the beginning of the 2017 season. (MTN Sports Photo)

After 18 years in administration, Mike Cutler has retired from his position as the superintendent at Philipsburg.

That might be bad news for opposing teams’ on the Drummond-Philipsburg football schedule.

“I watch a tremendous amount of video, but it’s getting out of hand already,” Cutler laughed. “There’s not going to be a play that a team that we’re playing for that I haven’t seen or analyzed, I can promise you that.”

Cutler has headed up the Flint Creek Titans, the co-op formed between Drummond and Philipsburg six years ago, for the past three seasons as head coach. They’ve gone 13-0 each of the past two seasons, winning back-to-back 8-Man state championships.

“Of course, everybody’s wanting to put a loss on us,” Cutler said. “I obviously don’t blame them, but we’re going to try to keep that from happening. And I’m pretty confident that these kids are going to step up and do everything they can to play hard and play well.”

A lot of talent has moved through the Titans’ program over the past few years — including Jaxon Lee, an all-state performer last year who transferred to Missoula Sentinel for his senior season — but Drummond-Philipsburg still figures to be one of the best teams in the class .

Three senior captains — Wyatt Rigby, Daniel Brabender and Conley Wagner — are back in the fold, as is junior quarterback Kade Cutler, an all-state player from a year ago. Juniors Preston Metesh, Ethan Parke, Destin Linn and Tucker Weaver will have big roles this season, too.

“They might be first-year starters, but they’re sophomore and junior kids. They’ve seen it, probably felt it. … They’re going to step right in. I have all the confidence in the world in them stepping up,” coach Cutler said. “These kids know what we expect right away. They’ve been through our system, they’ve been to our practices, those types of things. They kind of know what the expectation is right away. They’ve embraced that and adjusted well. We’re hoping that what we do is obviously doing things right, and we’ll see what happens.”

Drummond-Philipsburg will almost certainly be among 8-Man’s contenders this season, but the Titans will get an early test on Friday when they play Alberton-Superior. The Mountain Cats were a playoff team last year and only graduated two players.

The 8-Man West figures to be another challenging conference with the likes of Arlee, Charlo and St. Ignatius. Thompson Falls is joining the league this year, too, after dropping down from Class B 11-man football.

8-Man’s most competitive conference, though, will be the North, headlined by defending conference champion Shelby.

“I think anytime you’ve got some kids of our caliber that are returning — like Tanner Parsons and Mark Clark and, again, our younger kids were able to step up and get a lot of snaps last year — I think that gives you an opportunity to at least have some success on paper, but we all know you got to go out there and play, and that’s what we’re looking forward to doing, that’s for sure,” said Shelby coach Mike White.

The Coyotes have a loaded roster entering 2019. Parsons, a fullback/linebacker, and Clark, an offensive and defensive lineman, both earned all-state recognition last fall. Tabris Correa, a running back/linebacker entering his junior season, was also an all-conference player a year ago.

One of the biggest changes from last season will be at quarterback, where Logan Leck is replacing Damon Irvin.

“Last year we had Damon Irvin step in at quarterback, and he kind of learned the ropes. This year we have Logan Leck stepping in. He’s like a 6-(foot)-4 junior, he’s done a nice job. It’s really helped us being able to play a JV schedule the last few years as far as developing kids and getting them some confidence. We’re looking for some big things. Logan throws a nice ball, he’s got pretty athletic feet,” White said, adding that he also expects big seasons from Brock Stores, Tanner Watson and Tyler Larson.

As far as the rest of the North is concerned, White sees potential challengers in just about every community: Belt, Centerville , Chester-Joplin-Inverness , Chinook, Choteau, Fort Benton, Great Falls Central , and Simms.

Out East it’s a little more straightforward. Fairview will enter the season with high expectations and a target on its back. The Warriors field a talented all-state backfield of Alex Schriver and Cody Asbeck reminiscent of the Brock Schriver-Cody Vitt backfield of years past. Fairview graduated just three seniors off last year’s team that won the East with an unblemished record and advanced to the semifinal round of the 8-Man playoffs.

Nobody seems to know what to expect out of the South: Joliet is the defending conference champion, Ennis and Twin Bridges are perennial contenders, Park City is looking to make a move into the playoffs , and West Yellowstone is joining the 8-Man ranks after some solid 6-Man seasons. Hobson-Moore-Judith Gap and Harlowton have both moved out of the 8-Man South and into the 6-Man classification.