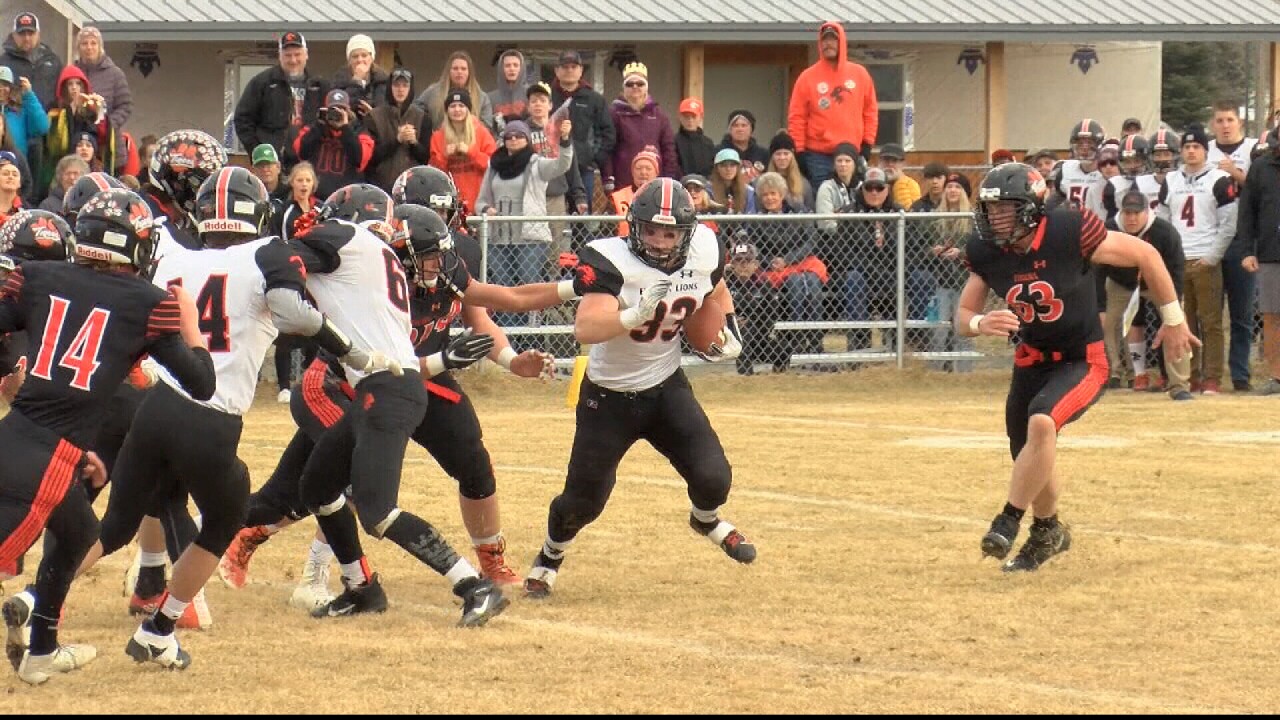 KYLE HANSEN/MTN SPORTS
Jake Kindel (33) runs the ball for the Eureka Lions against the Manhattan Tigers during the Class B state football championship game on Nov. 23, 2019 in Manhattan. Kindel will join the Idaho Vandals football program as a preferred walk-on.

MISSOULA -- All Jake Kindel asks for is a shot.

Like most football players from Montana, Kindel, a standout from the small town of Eureka, wanted an opportunity to prove himself at the NCAA Division I level, whether that be at Montana or Montana State or elsewhere.

For Kindel, he'll take a path less traveled by Montana recruits and take his talents to a Division I school outside of the state, albeit in the same conference as the Grizzlies and Bobcats.

Kindel announced on Twitter back in March that he accepted an opportunity as a preferred walk-on with the Idaho Vandals.

Idaho coaches initially made contact with Kindel in the late fall, early winter after Kindel, who was searching for that opportunity, sent his tape to coaches in Moscow. From there, coaches reached out and the communication began. The Vandal staff eventually offered him the preferred walk-on spot, and Kindel visited Idaho back in mid-February where he said he fell in love with the campus, the team, facilities and coaching staff.

It was then he made his decision to commit.

"I had offers from smaller schools and I wasn't sure what route I wanted to go and what I wanted to do," Kindel told MTN Sports. "It's just always been a dream of mine to play at a DI school. I always wanted to see if I could. You don't want to have any regrets, so I just decided I'd go for it so I can live with my decision without ever thinking what if, and I'm really happy with the decision I made."

Kindel received interest from just about every school in the state. He said every Frontier Conference school, aside from Carroll College, offered him, but talks with UM and MSU ended after Christmas. Kindel also said he held an offer from the University of Mary, an NCAA Division II school in Bismarck, North Dakota.

"It was exciting that that dream comes true," Kindel said. "Finally get a chance to chase a lifelong dream. Everything's kind of come together and I'm excited."

Kindel said cornerbacks coach Vernon Smith, who played at Montana from 2000-04, as well as Montana native and Carroll alum Paul Petrino were the two who recruited Kindel to Idaho.

Kindal was a three-time all-state linebacker and fullback for the Lions and started as a linebacker since his freshman year. This past season he carried the ball 95 times for 742 yards and 12 touchdowns. He led Eureka in receptions with 34 for another 484 yards and five scores as the Lions went 12-0 and topped Manhattan in the championship game. He also led Eureka in tackles with 124 total, including 5.5 for loss.

"Jake is an incredible student and athlete that works extremely hard to be great at everything that he does," Eureka coach Trevor Utter said. "He will be successful at Idaho both in the classroom and on the field due to his hard work and dedication."

Kindel is expected to suit up at linebacker for the Vandals.

"It's super exciting to be a part of something like that," Kindel said about Eureka's run. "I'm pretty fortunate to be able to say that I've won three state championships. It's amazing and credit goes to all of our coaches and our parents who put in all of the hours and the work with us.

"It's definitely exciting to say that I come from a winning program."

Like everyone else, Kindel is having to get creative with his workouts with schools and gyms shut down around the country. Kindel, along with his younger brother Joey and father Kenny, go to Eureka's track a couple of times per week to work on sprints or do drills with cones. At home the family has a few sets of dumbbells, so Kindel has been using that along with other workouts like push-ups and core work. Kenny Kindel is Eureka's offensive coordinator and has workouts planned for his sons consistently.

"It's been pretty easy to stay motivated," Jake Kindel said. "I still have work to do, but I will say doing the same routine has been getting kind of old so we've been trying to change things up a little bit, but it's fun.

"It's definitely a different type of workout that I've been doing, so it's been good."

Kindel, who played on the basketball team in the winter, was a returning all-state javelin thrower for Eureka's track and field team. But with spring sports officially canceled, Kindel is fully focused on college football and his next chapter in life.

Kindel has his shot. Now it's about making the most of it.

"It's a great fit and a great school," Kindel said. "I'm excited to be a Vandal."