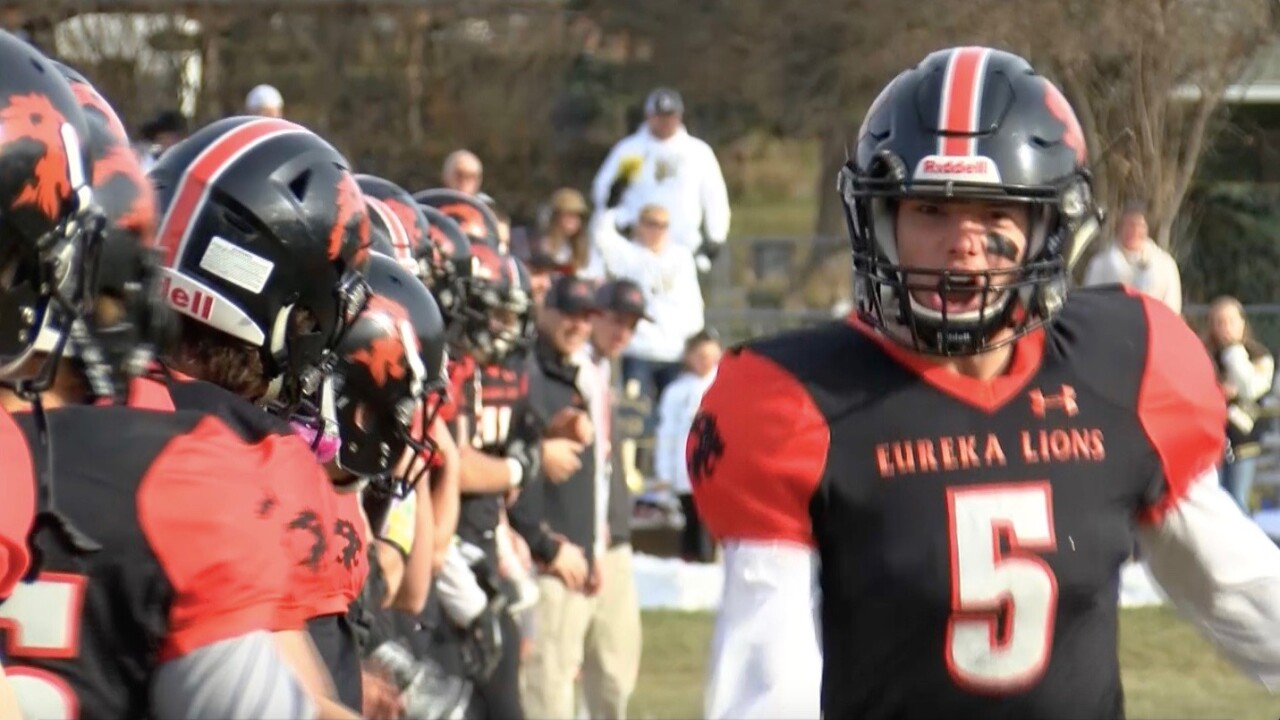 MTN Sports
Hank Dunn is introduced during the starting lineups of a Class B football semifinal game against Red Lodge.

After missing the Class B state championship game in 2018, the Lions once again find themselves playing on the final weekend of high school football in Montana. They will travel to Manhattan to take on the Tigers on Saturday at 1 p.m.

Of course, Eureka (11-0) is no stranger to deep playoff runs. The Lions won back-to-back titles back in 2016 and 2017, their first two football titles in school history. And after taking a step back in 2018, the Lions are right back in the mix to continue what is rapidly approaching dynasty status at the Class B level.

"We're feeling good about being back in this position, for sure," Eureka coach Trevor Utter said. "The disappointment of last year and the excitement of this year is a much better feeling and our kids are excited about it.

Eureka's road to the Class B semifinals last week was relatively smooth with the Lions winning by an average margin of 34 points per game. But last week against Red Lodge, the Lions won a shootout 39-35 as they held off a late surge by the Rams.

Now, they ready themselves for Manhattan (11-0), a team that doesn't average as many points per game as Eureka (47.4 to 36.8 per game) but has held teams to lower scoring numbers throughout the season. Manhattan's average points against per game is 9.3 while Eureka's is 13.4.

And after three home games throughout the playoffs, Eureka is now tasked with heading six hours southeast for its first road game in almost a month.

"The home-field piece that you have when you're playing at your home field, you have the energy of the fans and the community behind you and we're going to be missing that a little bit," Utter said. "But I will say, we travel well. When we went to Loyola (in 2016) for our first championship on the road, we had more people at the game than they did. I do think our fans will travel well with us and be very supportive."

A big part of Eureka getting to the state championship again is that experience. As Red Lodge was coming back, Utter said the Lions got the ball back with just over six minutes to go and they needed to kill the clock.

They did just that. They drove the length of the field and took a knee to ice the game out to punch their ticket to the state championship game once again.

"One thing that a lot of these kids have, is they do have an incredible amount of experience in this situation that nobody else in the state can really say," Utter said. "These kids have been here and they kind of know what to expect as far as the preparation and what the stage is going to look like a little bit."

So two teams whose colors are orange and black will battle it out for the Class B title on Saturday. If Eureka wins, it will be the first time a Class B school has won three titles in four years since Baker did it from 2001-04.

"I hear over and over, and our kids do, too, that our community is incredibly proud of what's going on with Eureka Lion football," Utter said. "They love it. We've always been a proud community of hard-working people that love the Eureka Lions. Even if you weren't good, they loved you.

"Now that we're having success here over the last four (years), I just hear over and over just how they proud they are of the kids and how happy they are seeing what they're accomplishing. There's an outpouring everywhere you go."

Kickoff between Eureka and Manhattan is slated for 1 p.m. on Saturday afternoon in Manhattan.