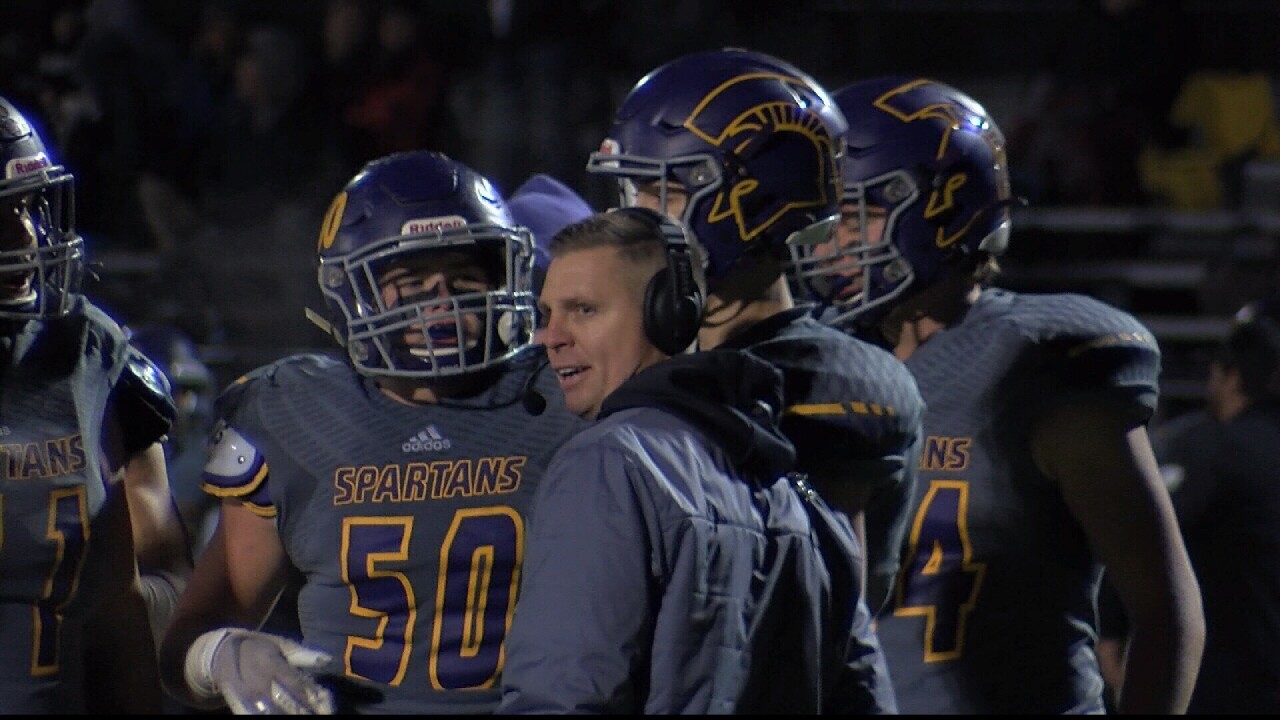 MISSOULA -- Pre-COVID-19, Missoula Sentinel's football team already had high expectations coming into the 2020 football season thanks in large part to the number of starters the Spartans return from a year ago.

Then, recruiting season happened, and those expectations might have gotten even higher.

Sentinel is forming a strong pipeline with Montana's 2021 recruiting class this summer. So far three Sentinel incoming seniors have made verbal commitments to UM, with others potentially in the mix going forward.

“It’s rewarding for me because we’ve always said if you start building a successful program those college opportunities will come for those kids, but we really harp to these kids about just focusing on taking care of what’s important now and what’s in front of them," Sentinel coach Dane Oliver said. "That’s being a great Spartan and those opportunities will come for you.

"It's a byproduct of a lot of hard work by a lot of people and even players that have played here before."

Receiver TJ Rausch, linebacker and offensive guard Geno Leonard and incoming running back Jace Klucewich, who transferred to Sentinel from Frenchtown for his senior year, are the three Spartans who will trade in purple and gold for Grizzly maroon and silver after their high school careers close.

But it doesn't stop there. Sentinel offensive lineman Dylan Rollins, the top in-state recruit in Montana, also holds an offer from UM, as well as Montana State, Northern Arizona, and FBS schools Oregon State, BYU, Central Michigan, Air Force and a number of schools in the Ivy League. Rollins also has been offered a preferred walk-on spot at Nebraska.

So, Sentinel has three future Division I football players going to the same school, a fourth who has yet to pick a DI offer and others who might play at that level or elsewhere. Oliver said a number of other players are fringe guys with in-state FCS football and the NAIA schools. And regardless of where they go, he's proud of them.

"With all of these kids getting offers in this senior class, I hear a constant of them saying, 'Hey, we want to be successful as a Spartan this year,'" Oliver said.

For players like Rausch, Griz athletics is a legacy. His mother, Ann (Lake) Rausch, played basketball for the Lady Griz. Oliver noted how kids who grow up in Missoula have it in the back of their minds that someday they’d like to suit up at Washington-Grizzly Stadium.

“There’s a connection that’s allowing these kids because they’re talented and successful and they grow up a Griz fan," Rausch said. "It’s a pretty easy selection for a lot of them.”

Over the past several years, Sentinel has had a good recruiting connection with UM for football. Currently the Griz sport five former Spartans on their roster, tied with Kalispell Glacier for the most in-state recruits from the same school.

"It's awesome," Rausch said. "It's always nice to have a couple of people you know and how we'll be teammates for five more years or however long so it's awesome to see."

"I think it's just really cool how our coaches help us out in that regard to recruiting and help us get these opportunities to communicate and connect with these coaches up at UM," Leonard added.

For Oliver, who is entering his ninth season as the program's head coach, it's rewarding to see the hard work of his players pay off.

“It’s back and forth always on promoting the kids but also preaching unity and what I’m saying about these kids is they’ve been team-first kids," Oliver said. "It hasn’t been about self-promotion so that’s been easier on me to navigate. Everybody recognizes these are talented players, but the most important thing is the team and putting a good product on the field hopefully this fall.”

Before Klucewich joined, Sentinel already returned a lot of talent from a team that made the semifinals a year ago. If and when a high school football season does happen, the Spartans figure to be right in the mix at the top of the Class AA as one of the favorites to win the title. When high schools get the chance to take the football field again, Sentinel is aiming to be the first Missoula Class AA school to make the state championship game since 1994. Sentinel last won a football title back in 1972.

“It’s what you want, right?" Oliver said of the expectations. "We’ve been working hard to have expectations and it started out like you hope to win, now it’s expected, so with that comes a new set of external pressures that we got to navigate."