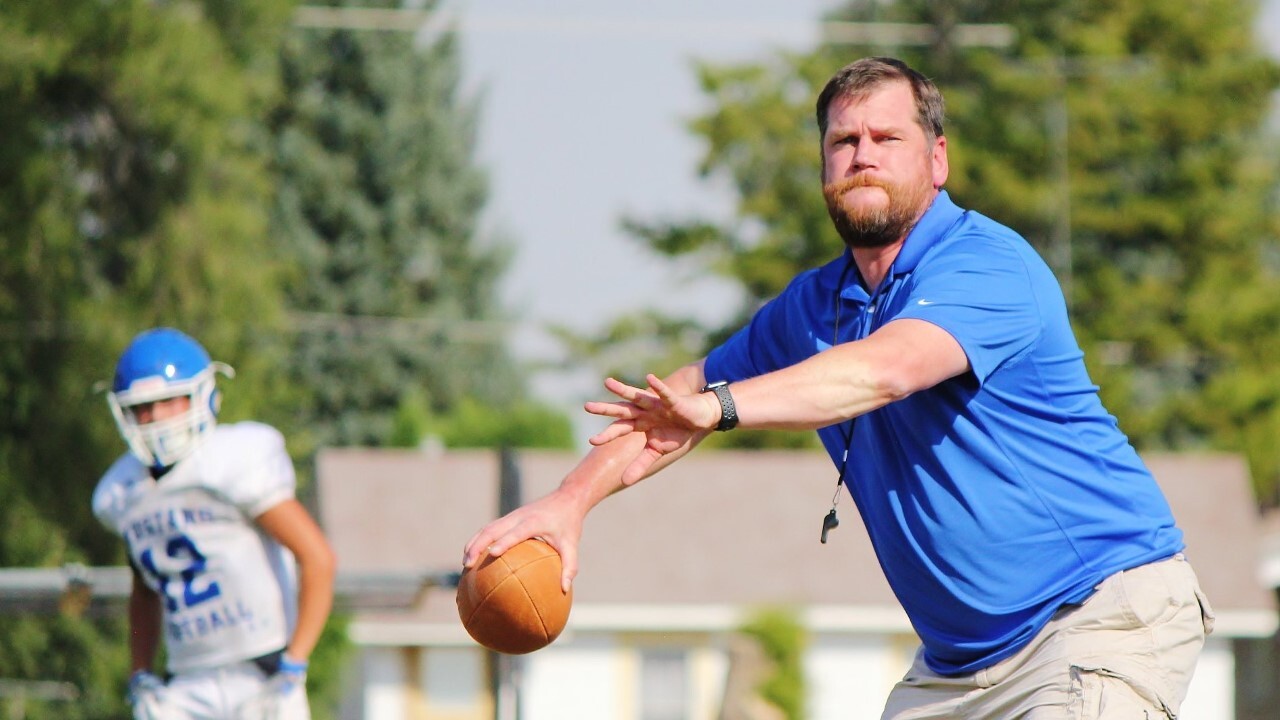 Tom Wylie/MTN Sports
Former Malta head football coach Jim Benn throws a pass in practice in August of 2017 in his first season as the Mustangs head coach. Benn has been hired as the new head football coach of Bigfork High School heading into the 2020 season.

BIGFORK -- A Class B football staple is back in the head coaching ranks.

And he found his new home on the shores of Flathead Lake.

Benn, who was hired on Wednesday, takes over for Patrick Munson, who spent one season as the head coach of the Vikings. Munson replaced Bigfork legend Todd Emslie, who stepped down in January of 2019 after 16 seasons as the head coach, including the school's lone state title run in 2010.

"If there's any claim to fame, it's that I've coached at every Class B stadium in the state," Benn said with a big laugh. "It's been a really fun adventure and anything beyond this is kind of gravy. It's been a pleasure to get to be in all of the places I've been with the kids and coaches. It's been awesome and I feel very fortunate."

Benn has been around the coaching block in his time as an educator in Montana. After growing up in Frenchtown, Benn attended Montana State, where he spent time in Manhattan as he began his coaching career. After stops in Corvallis and Huntley Project, Benn spent eight seasons as the head football coach in Ronan. He stepped down from Ronan after the 2015 season and took 2016 off before taking the head coaching gig at Malta in 2017. He spent two seasons coaching the Mustangs.

In 2019-20, Benn was the offensive coordinator for the football team at Missoula Loyola and in September became the school's athletic director.

Benn said a big factor in moving from Malta to Missoula was to be closer to his daughters who live in Ronan. Now, he'll be just slightly closer to them in Bigfork.

"I've had a good relationship with the folks up here and really have respect for what Todd Emslie did with the program," Benn said. "Just the desire to be in some place that has done a great job in Class B football.

"It's not very often that you get to have a great job in the middle of paradise."

Benn said he enjoyed his time working with Loyola's coaching staff and players as the offensive coordinator and said the team was having a good summer of preparation. But once he saw the opportunity to jump back into being a head coach Benn said he had to take it.

Benn enters his 23rd year as a teacher in Montana and he'll be teaching Spanish and computers at the middle school in Bigfork while coaching. Benn's son, Cormac Benn, will also be joining him at Bigfork. Cormac is an incoming senior and was a second-team all-conference player for Loyola in 2019 as a junior receiver and defensive back.

The Montana High School Association is a go for high school sports this fall, and, knowing things can change at any minute, Benn said the biggest lesson he plans to preach to his new program is appreciation for the opportunity these players get.

"Right now it's more about let's get this thing started and let's have a season," Benn said. "The biggest thing right now is just letting the kids have an opportunity to play. We really have to appreciate what we can do and to me that's the biggest thing.

"I feel really lucky and appreciative that I get the opportunity. Our slogan this year is just going to be real simple: It's, 'Get to.' We're going to be thankful every day that we get to do this. I'm definitely no exception to that."