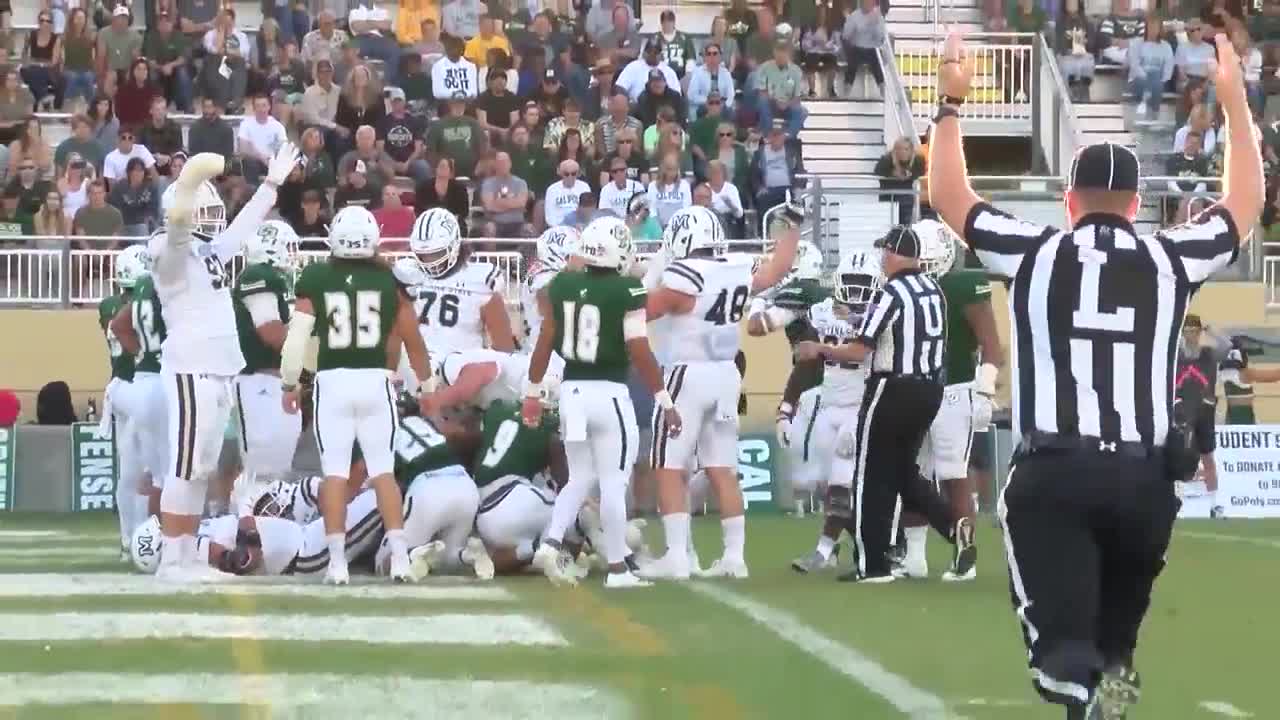 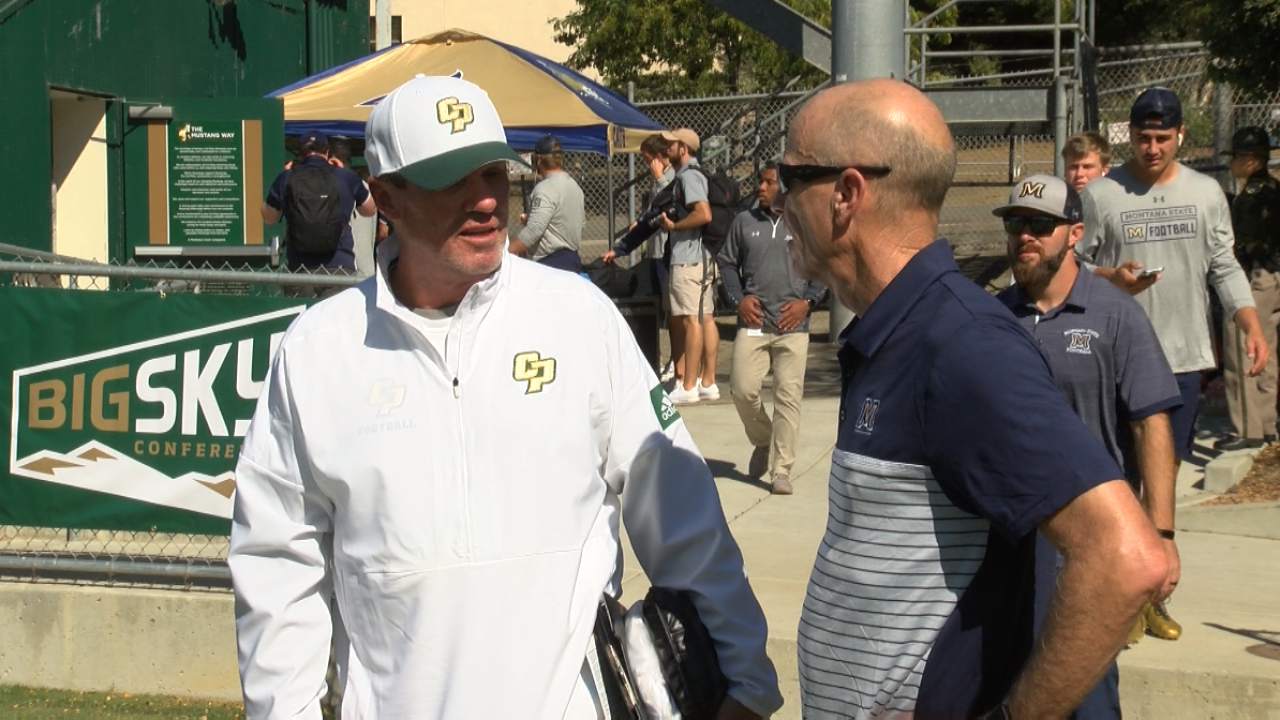 SAN LUIS OBISPO, Calif. -- Steve Kracher is one of the all-time greats at Montana State. As a Bobcat running back from 1972-75, he re-wrote the record books. The Columbia Falls native rushed for 2,979 yards in his MSU career, a record that stood for decades but still ranks third.

His 6.1 yards per carry average is still the Montana State standard.

After his playing career finished, Kracher entered the coaching and teaching world where he's made his career for 39 years. He currently makes his home in San Luis Obispo, CA. After a decade as the equipment manager at Cal Poly, Kracher recently accepted a role as a defensive analyst on the Mustang coaching staff.

MTN Sports caught up with Kracher ahead of Montana State's 34-28 win over Cal Poly for our Sunday Conversation.

MTN Sports: You’ve been on this side of the battle a few times now with Cal Poly. Are there any emotions or memories that bubble up when you play against the Cats?

KRACHER: “Well, anytime you look across the field and see the uniform that you once wore, there’s that allegiance, there’s those memories that come up from when you were in that uniform. It does bring back a lot of memories.”

MTN: What are these moments like? I saw you got a chance to catch up with old teammates like Dan Davies and Mike Holder.

KRACHER: “Holder and I were talking last night about the number of Montana kids that were on our team that were in our starting lineup. I think about eight of our offensive starters and about seven or eight players on defense. And all five of the coaches on the staff. Sonny Holland, Cliff Hysell, Sonny Lubick, Don Christensen, Howie Ross they were all Montana guys. And so, they recruited the state heavy. So, we took a lot of pride in that. Roscoe Schmidt from Circle, or Brockway. Mike Holder and myself, we were little small town Montana kids in the starting backfield. And it’s great to see them all. Brad Daws is down here for the game. Again, once you see that uniform and those MSU colors, it brings you back.”

MTN: Tell me about your role at Cal Poly. This is your first year as a defensive analyst?

KRACHER: “I retired here about three years ago at Cal Poly. I got out of teaching, and then I spent the last 10 years as the equipment manager here at Cal Poly. And when I retired, I traveled my first year and lived in Montana my second. Then came back and coached down in Ventura last year. Then I talked to coach (Tim) Walsh about doing something else in retirement and staying active and he told me I could help here. So, I got into being a defensive analyst, and I really enjoy it, it’s a different thing. It’s year 39 in the coaching profession for me, so it’s in my blood.”

MTN: I’m told no one on staff watched more game film than you. What have you seen from Montana State?

KRACHER: “My job as a defensive analyst is to scout and put all of the data together on an upcoming opponent. So from a defensive standpoint I watch their offense, I’ve seen every game, watched every clip, entered all the data. Break it down, analyze them for the coordinators so they can put a game plan together. The Cats are very, very multidimensional in terms of how the lineup. Tackle overs, unbalanced sets, wildcats, motions, shifts, different personnel groupings. But at the same time, they have a half a dozen run plays and a few passing concepts that work for them. Our defensive guys eyes must be right, they have to recognize what’s going on and then play what they see. Recognizing that at the snap of the ball takes discipline. They’ve been working hard at it. They have a good array of running backs. Extremely well coached and a good team.”

MTN: You’ve touched on your coaching career over the last 39 years, but I know that’s just scratching the surface. Can you walk us through your teaching and coaching career after Montana State to what led you here to SLO?

KRACHER: “I got out of college and began my high school coaching career. First job ever was in Malta, believe it or not. Then I spent a year as a grad assistant coaching tight ends for Sonny Lubick in his first year as head coach at MSU. From then on, I coached a couple years in Wyoming and Montana and when I turned 30, I wanted to get into college coaching and I researched some places and wrote some letters. The guys here at Cal Poly responded with an opening. So, I came here in 1985, off and on. Spent a number of years here and in Montana back and forth. A grand total of 39 coaching years, but I’ve lived here in SLO for 24 of my 65 years on earth. So, I think I have a great setup, Montana or San Luis. Two great spots to be.”

MTN: What do you love about this place?

KRACHER: “Cal Poly to be honest with you is very much like Bozeman. It’s a college town separated from other towns in California. There are 18-thousand students which I think it about MSU size. State school, so it’s an ag and engineering school. The coaches here great guys to work with, so it’s just a pleasure to be here.”

MTN: You mentioned you’re retired. Football has kind of been a through line for your whole career, but what keeps you busy away from the field?

KRACHER: “This may sound stupid, but I enjoy football on TV. I go to the high school games when I can because I coached at both the private and the public school here in San Luis. I like to hike and bike, and the ocean is only eight minutes away. You can take off and plunk your chair on the beach and take your book out and you’re right there. It’s kind of a good spot to be.”

MTN: What memories from your playing career come to the forefront when you think about your time at MSU?

KRACHER: “We were very much a run-oriented team. We played great defense, our defenses were great. I think the very first memory as a young freshman was we won the Big Sky that year. That’s when they were building Reno H. Sales stadium which I think has one section that still exists there. That year were played our games out at Bozeman High. Teams like Boise State or Idaho in the fancy stadiums would come down. We won the Big Sky, we had the best defense in the league and played great. That was a fun experience as a freshman to kind of be part of that. The next three years we finished second to Boise State, we always seemed to play great games with them. But just the traditional football that we played back then was a big thing to be a part of. Run the ball, pound the opponent, great defense. As coach Holland used to say, any team that played us back then is going to come out bloody. We were going to put it to them physically on both sides of the ball. When you’re a football player you love to be in those kinds of environments where it’s a physical, traditional game.”