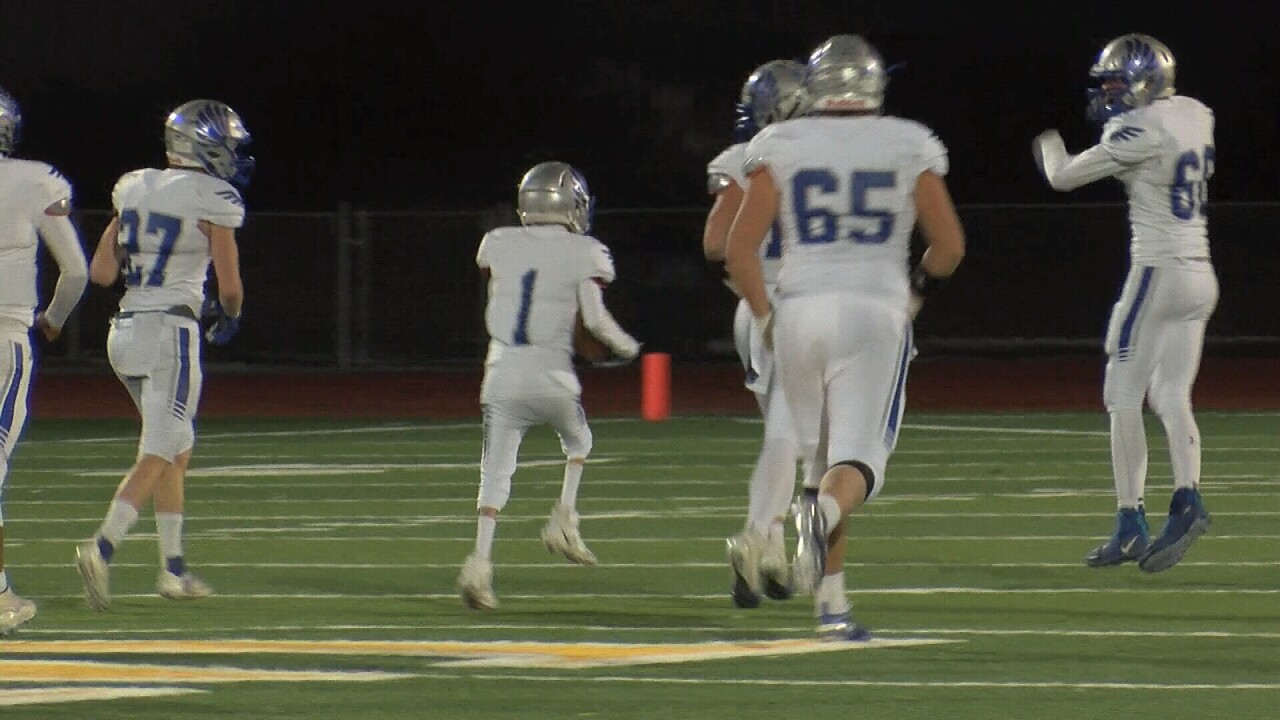 MISSOULA — On a chilly evening at Missoula County Stadium, Tristin Edwards quickly warmed the hearts of the coaches, players and fans in attendance.

With Billings Skyview trailing Missoula Sentinel 45-0 early in the fourth quarter, Edwards took the handoff from quarterback Jaylen Baker deep in Falcon territory, and went 89 yards to give Skyview its first points of the game.

But the touchdown meant so much more to everyone watching. Edwards is a senior with arthrogryposis multiplex congenita, a condition that causes his joints to improperly contract and expand. So as he raced down the turf at Missoula County Stadium, not only was he cheered by his Skyview teammates and coaches, but Sentinel's as well. After reaching the end zone, Edwards was lifted by his teammates in congratulations as the sideline emptied in celebration.

Why we love sports today. Tristan Edwards, a senior at Skyview, was given the ball and he goes 89 yards for a touchdown. Edwards suffers from arthrogryposis, a joint disorder. Both sidelines cheered him on and he is swarmed by teammates after the score. #mtscores pic.twitter.com/Ax7T9emeNX

Multiple Skyview players went up to Sentinel football players to thank them for their kind deed that united both squads in a moment bigger than football.

"It was my last game so I felt amazing that they helped me through everything," Edwards said afterwards donning a big grin. "I've been here for four years and it's just heartbreaking that it's my last year here. At least I got one more touchdown to count for it.

"It's people getting together and doing an amazing thing and helping someone out. I just love the community everywhere in Montana. I just love it here."

Sentinel would go on to win the game 45-7 in the opening round of the Class AA playoffs. But that one moment between Edwards and everyone else stood out as the play of the game, and arguably, the season.

And for Edwards, getting swarmed by his teammates afterwards will be tough to beat.

"I just love them all," he said. "I hope they go big and I'll be right there next to them hopefully. It's beautiful that they accepted me for who I was and everything so that was the most beautiful thing about it."

The moment counted as especially personal for Skyview coach Nathan Wahl, whose brother also suffers from a similar condition.

"I talked with coach (Dane) Oliver for a little bit and he said they were all for letting Tristin carry the ball," Wahl explained. "Tristin is just a kid who has just grinded through so much with these guys. He's worked his way up with these guys since they were little kids and he spent four years in our program and he doesn't ask for anything. He comes out and if you ask him to run hills, he'll run hills. He does everything we ever ask and that's been a really cool and special thing for him to get that moment.

"I think it was sobering for sure. For us, certainly with the season we had, this is far more than about football for us. We use football as a platform to build young men and character and relationships and all of that comes to fruition in plays like that and I think that's our purpose and that's why I do this. Watching Tristin and not only that, there was no way you were going to keep his teammates on the sidelines and watching our guys rush the field for him was a pretty cool experience."

And the feelings reached past the Skyview faithful. Oliver, Sentinel's head coach, was visibly emotional after the game when talking about Edwards' touchdown.

"I thought it was the moment of the game, honestly," Oliver said. "It brought a tear to my eye and I think it was cool, everybody's reaction in the stadium. I think about a kid who goes to football practice everyday and probably never been in a game and it's a commitment and he's out there supporting his teammates.

For Oliver, he said it was a moment to enjoy watching his players also celebrate something bigger than football.

"It makes you proud of kids," Oliver said. "(I'm) at a loss for words. It's probably something I'll remember forever."