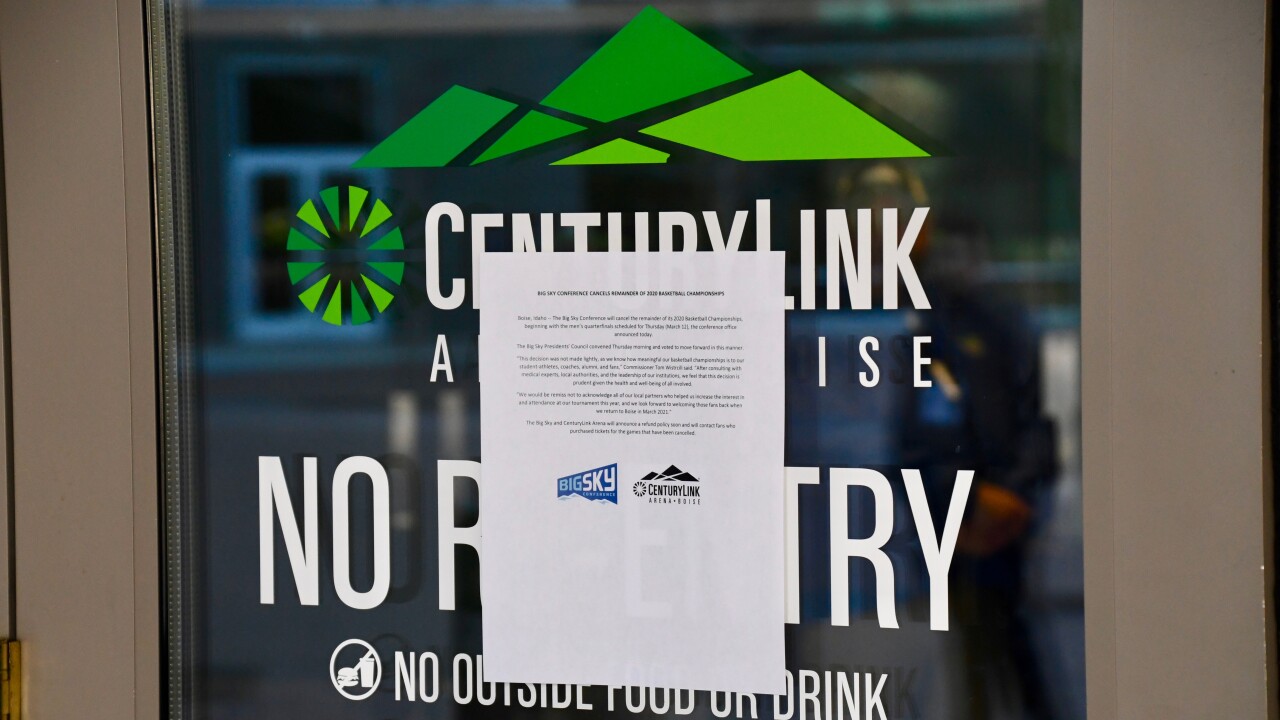 BOISE, Idaho -- The Montana State women's basketball team has already had a historic season and was one win away from making it an all-timer.

That opportunity was eliminated on Thursday, though, as the Big Sky Conference -- alongside the rest of the college sports world -- canceled its basketball tournaments. The men's quarterfinal games were less than two hours from tipping off Thursday when the conference announced the cancellation. Both the Montana and Montana State men were scheduled to play on Thursday.

The Bobcat women were set to play Idaho in the Big Sky championship game at 1 p.m. Friday.

"Obviously we’re disappointed that the tournament had to end this way but also understanding of the precautions that we need to take for the student-athletes, for the coaches, for athletic department staff and for the fans that are here and just what is going on across the country," said Montana State director of athletics Leon Costello. "Very disappointed, obviously from an athletic perspective, but obviously our job as administrators is to protect and support our student-athletes, their health and well-being, that is paramount. This is a step and a precaution that we definitely had to take."

Tournaments and athletic events across the country have been postponed, suspended or altogether canceled in response to the outbreak of the coronavirus. Steps were measured at first with conference officials distributing antibacterial and reminding fans and others in attendance to practice proper hygiene. The responses grew in severity over the past couple days, seemingly coming to a head on Wednesday. Initially, tournaments were to be played with no fans in attendance. By Wednesday night, many tournaments were being canceled, and the NBA became the first professional sports league to suspend its season.

"I got the feeling when Dayton did it, to have the First Four (NCAA Tournament games) and have no fans, and then all of sudden the NCAA Tournament comes out and says that, yeah, you felt, as everything started to (unfold), it’s going to hit us, and we’re going to have to do something," Costello said. "I’m just shocked at the immediacy of everything and how quickly it did happen. And kudos to them, everybody for making those decisions with the best interest of the student-athletes and the programs and everything at heart. It’s still surreal. I don’t know if it’s hit us yet. It feels like it’s a dream right now. It doesn’t feel like it’s real."

The NCAA announced it is canceling the men’s and women’s basketball tournaments, as well as all remaining winter and spring NCAA championships. The decision was "based on the evolving COVID-19 public health threat, our ability to ensure the events do not contribute to spread of the pandemic, and the impracticality of hosting such events at any time during this academic year given ongoing decisions by other entities," according to a statement.

Montana State would have received the Big Sky Conference's automatic berth in the women's bracket. The Bobcats went 19-1 during the regular conference season to secure the No. 1 seed in the league tournament. They won their first two games in the tournament before the news of Thursday's cancellation spread.

“The first thought is that I’m bummed for all the kids (in the tournament), they’ve prepared for this moment the entire season and it’s taken away," Montana State coach Tricia Binford said in a statement. "Then you think about our seniors, that they don’t have this opportunity. For us specifically, we’ve been on a run to a record-breaking season and to have it stop like this is quite unusual and unprecedented. But that said, these decisions are above us and it’s for the safety of everybody. We’ll wait and see what happens for next week.”

“The message I’ve communicated to our kids is that they’ve accomplished all the goals they set out to achieve. They’ve done that," Binford added. "Not to have the opportunity on the court is disappointing, and the same with Idaho. Both teams are disappointed not to play each other, it would have been a fun game, but it’s hard to have words right now because it’s such a remarkable situation.”

On the men's side, Montana State hadn't yet taken the court during the conference tournament. The first round took place Wednesday, and both Montana and Montana State had byes into the quarterfinal round. The Bobcats were scheduled to play Portland State at approximately 2:30 p.m. Thursday, while the Grizzlies were supposed to play Idaho State at about 8 p.m.

"Obviously we don’t know about the virus. Our job as leaders and educators is to make sure we protect the student-athletes first. It hurts for all the seniors – not just Harald Frey and Ladan Ricketts on our team, but all the seniors in the conference – and it’s sad," first-year Montana State men's coach Danny Sprinkle said in a statement. "This is what they work for all year, these conference tournaments and to play in March Madness. For them not to get this opportunity is a harsh reality, and there’s no way to prepare, no book to tell us how to tell those seniors. Looking at Harald and Ladan, it breaks your heart for them, and every coach is going through the same thing. Coach Binford’s going through the same thing, and their team was going to play for a championship (Friday), and they have a bunch of seniors. It’s hard, and the reality is that we don’t know the extent of this virus. I think the Big Sky did the right thing, and you see everybody in the country doing the same thing.”

Meanwhile, Montana State was focusing on its two teams with scheduled road trips. Costello said they pulled the track team from its planned trip to Cal State Fullerton, leaving just the tennis and basketball teams still on the road. The men's basketball team was to bus back to Bozeman on Thursday, and the women would leave on Friday. The logistics of getting the tennis team home from Arizona are still being finalized, but they, too, will soon be en route back to Bozeman.

"Those are the only teams right now that we would’ve had on the road, so working with the tennis team to see how we get them back and what the actions are moving forward," Costello said.

"But, as an athletic department, we will move in the direction that the university tells us to. We’ll follow the procedures that they tell us."