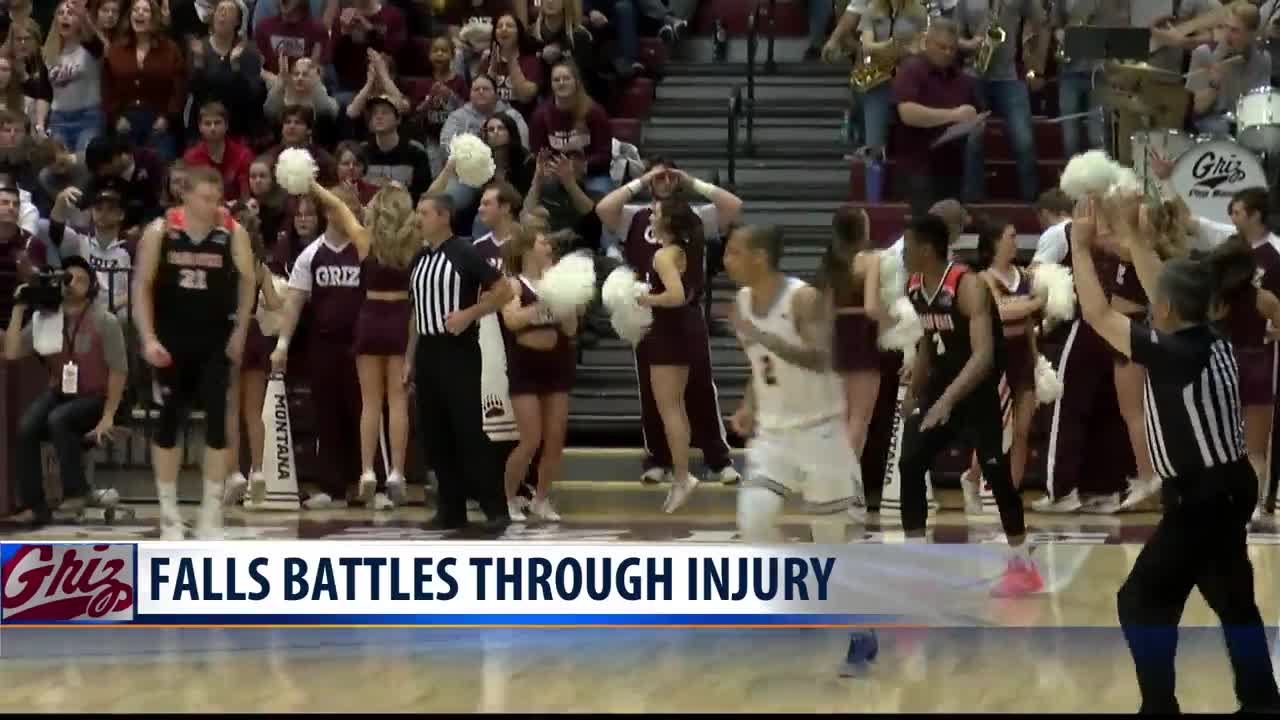 MISSOULA -- Timmy Falls' career with Montana's men's basketball team has been as a fan favorite who wears his emotions on his sleeve while racking up highlight-worthy assists and defending the opponent's best guards each night he steps onto the court.

Falls' passion, grit and vocal personality have been on display since he put on a Grizzly jersey. But recently, the junior took that passion and toughness up another level after playing through an injury when Montana beat Montana State on Saturday.

Falls took a hard landing on a layup on Feb. 15 against Idaho State, and a Bengal player landed awkwardly on his right ankle. Falls stayed down on the court for a moment before needing assistance off it. He went into the locker room and emerged with an ice pack on his ankle and crutches.

His status was uncertain all of last week, but he took part in certain drills to strengthen up his ankle again. Then, on Saturday not long before tipoff, he was given the go-ahead to play against the Bobcats.

"Honestly, I didn't know I was going to play until like Saturday," Falls said before Tuesday's practice. "Like Friday I kind of had a feeling that I was good to go. Saturday I told (head coach Travis DeCuire) I was good to go and he was like, 'Yeah, I'll think about it,' and then we walk in and my name's on the starting lineup and so I'm like, 'Alright, I guess he thought about it.'"

Falls went on to play 26 minutes against MSU. He scored three points on 1-for-4 shooting and recorded four rebounds, an assist and a steal before fouling out as the Griz won 59-54 for their sixth straight win.

That toughness in Falls was never in question. More than anything it was upheld as he powered through an injury he was originally told would take three weeks to recover from.

"Coaches and training staff had a plan leading up to Montana State," Falls said. "My weight coach and trainer were really on me about getting rehab and just trying to get mobility back. They did a good job of helping me get ready for Montana State. They got me right.

"I did not want to miss Montana State. Those are games I look forward to every year. So I just thought it was important for me to work as hard as I could to get back because you never know with those games and the atmosphere and everything. You never know how those games are going to go, so I just wanted to be there to help my team win."

Battling through an injury like that also endeared him to his head coach.

"It explains his commitment to winning and how important the success of Grizzly basketball is to him," DeCuire said. "It's hard to find guys who play through injuries and commit to the success of the group more so than just their individual success and it's a pleasure to have him. He's got as much fire as anyone I've ever coached."

In his first two seasons with the Griz, Falls was a consistent spark off of the bench before coming on strong toward the stretch run of last season where he was ultimately inserted into the starting lineup in the final five games.

Falls didn't start the first four games this year as he recovered from a wrist injury suffered in the offseason but has since started every game. And with such a large turnover from last year to this season, Falls has joined seniors Kendal Manuel and Sayeed Pridgett as the team's vets from the past two NCAA Tournament teams. This season, he's played to his strengths with running the offense and his defense but has found a more consistent scoring ability, as well. In the seven games before UM played Idaho State, Falls scored in double figures in six of those games. On the year, he's averaging 6.9 points, 2.6 assists and 2.3 rebounds per game, all career-high marks. He also has career bests in steals this season (31) and blocks (12).

His play has quietly been another key element in why the Griz haven't missed a beat with their current first-place 13-3 record in Big Sky Conference play.

"Even though we lost a lot last year, we still had three guys who were playing pretty good minutes," Falls said. "So for us, Kendal and Sayeed having great leadership and then me facilitating a little bit helps the younger guys have confidence and then the whole circle connects. I think it's a good combination of young and older."