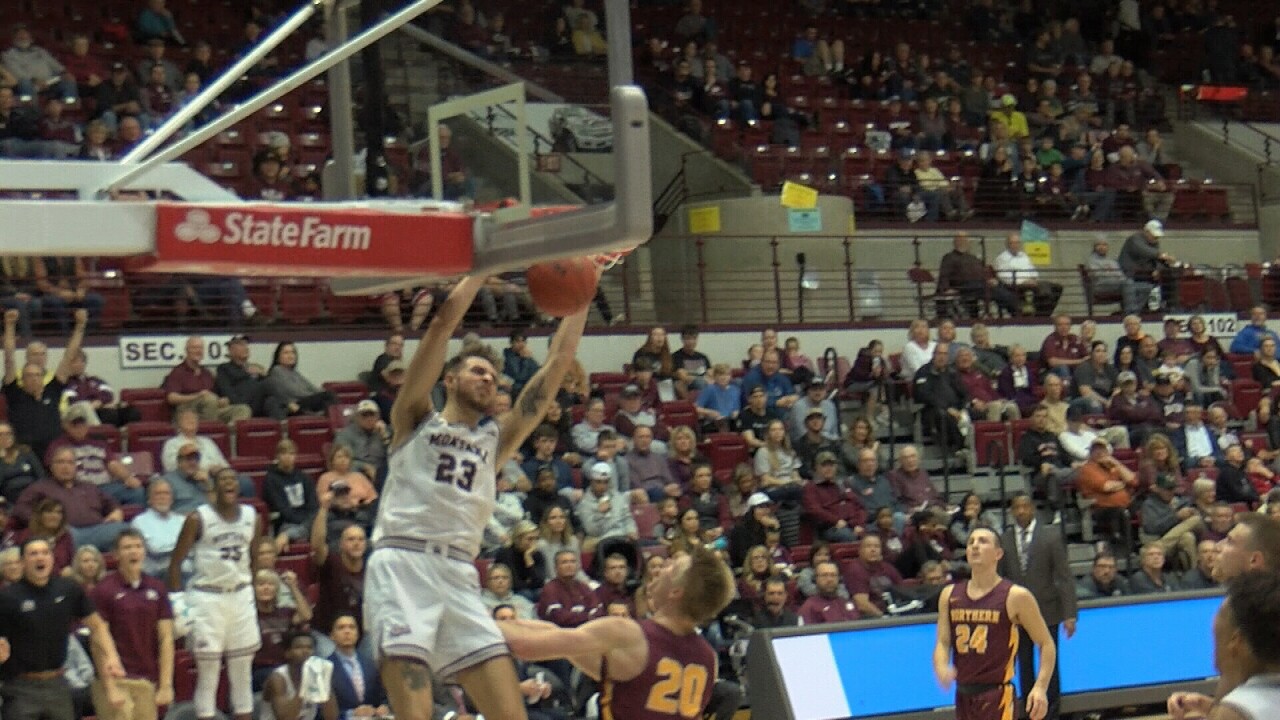 MISSOULA — Despite trailing for most of the first half, the Montana men's basketball team rebounded and defeated Montana State University-Northern 64-50 on Sunday afternoon at Dahlberg Arena.

Northern came out hot as the Lights cashed in on their first seven field goal attempts to grab an 18-6 lead. The Lights improved on that with a 10 for 13 start to lead Montana 25-12 with 7:40 left in the opening half. The Griz started 6 of 20 from the field.

"They outplayed us. They played a lot harder," Pridgett said. "They came and brought it to us."

"For us it's all about getting high-percentage shots," Montana coach Travis DeCuire added. "I thought we settled a little bit early. We got good looks and they didn't go down and then we settled on a few. It was important for us to attack the rim."

But Montana began to figure it out as they finished the first half converting 8 of 12 shots to trim Northern's lead and the Lights went into half up 32-30. Montana went on an 11-0 run to end the first half.

"They run a really good offense," DeCuire said. "It's a hard coverage. I don't know that we'll play anyone on our schedule this year that runs an offense similar to that. The floor is spaced with multiple shooters and there's some screen actions that are hard to guard."

After Jesse Keltner scored to make it 42-37 Northern with 15:50 left to play in the second half, Pridgett took the game over. The senior would go on to score 14 straight points for Montana to give the Grizzlies a 51-44 lead with 10:39 to play.

"I tried to attack on the side where we had our best shooter on which was either Kendal (Manuel) or Josh (Vazquez) so (the defense) wouldn't be able to help," Pridgett said. "Once I got one-on-one by myself I just scored and took advantage of my shots."

Northern's Devin Bray stopped the bleeding with his second 3-pointer of the game, but Pridgett started to get help from there as Timmy Falls scored the next four points while Manuel added a jumper and found Mack Anderson for a wide-open dunk to ice the game away.

"We played a really good first half," Northern coach Shawn Huse said. "We're competitive. We believe we have a great team so of course we're disappointed walking out of here today (with a loss). Having said that, they certainly get after you. They're young and figuring themselves out a bit right now. We were able to take advantage of some of that inexperience. Once they started to relax and calm down and settle in, the defense really gave us some troubles."

Kavon Bey scored 15 points and grabbed eight rebounds to lead Northern. The game counted as an exhibition for the Lights. Mascio McCadney added 14 points while Brey, a Missoula Hellgate grad, finished with six points on 2-for-6 shooting including 2 for 4 from deep. Bray added five rebounds.

Pridgett led the Grizzlies in assists with four while Anderson had six rebounds to lead the team. Montana forced Northern to commit 18 turnovers which it turned into 19 points.

Montana (1-1) next faces Arkansas of the SEC on Saturday while Northern (2-0) takes on Northwest University (Washington) in Great Falls on Friday, Nov. 22.