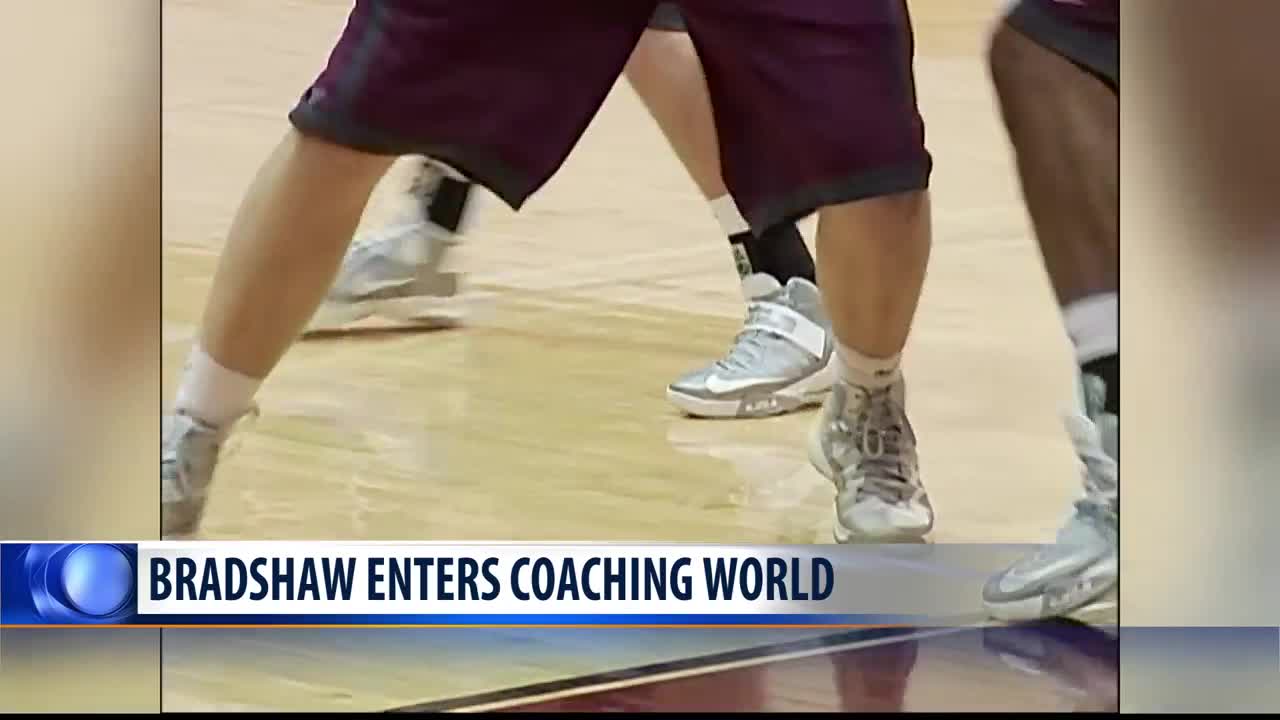 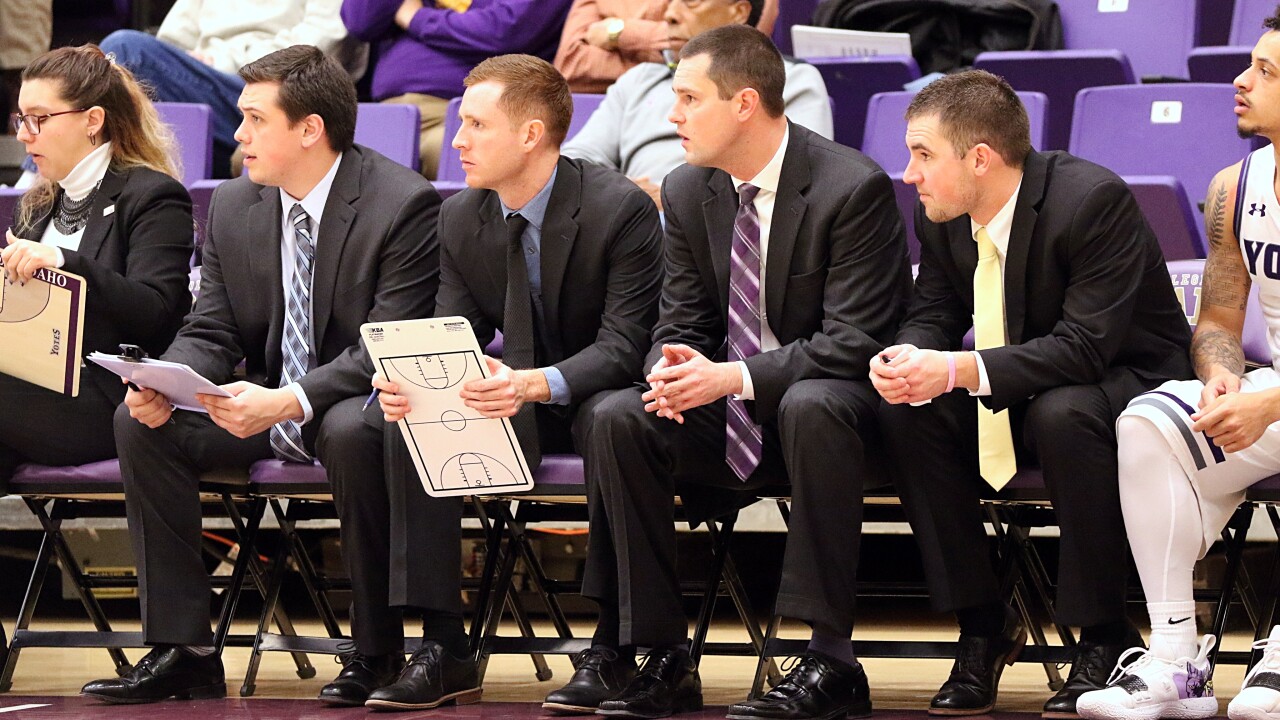 After the game of basketball dominated his life for so long, Bradshaw, a Corvallis native, needed some time to get away and pursue other opportunities.

After graduating from Montana in 2018, Bradshaw moved to Denver after accepting a marketing job with Guild Education, a company that helps working adults go back to school.

"For me, it was just nice to get a job outside of basketball, to see the other side of things and work more regular hours and things like that," Bradshaw told MTN Sports recently. "So, it was good for me in building that experience, but as I was going through it I definitely started missing basketball."

But in the late summer of 2019, Bradshaw said a couple of mutual friends -- Montana Tech assistant coach Derek Selvig and Northwest University assistant Zach Smith -- reached out to him asking if he wanted to get back into coaching and that they knew of a good opportunity at the College of Idaho that would fit him well. From there, Bradshaw got in contact with College of Idaho head coach Colby Blaine, who is a Montana Western graduate and a man Bradshaw had previous contact with through AAU basketball. Blaine serves as the head coach of the Idaho Select team, which features some of the best players from Idaho and Montana.

So Bradshaw went for it and accepted a job as an assistant coach on Blaine's staff in Caldwell, Idaho, for his first gig as a coach. And away they went.

"I was really excited about it," Bradshaw said. "I just knew the program it was and for me it was a really good opportunity, so took advantage of it down here.

That opportunity was one Bradshaw wasn't actually looking for and kind of came out of nowhere. But it was one he couldn't pass up.

He experienced a fruitful first year on the bench, as well. College of Idaho, which competes at the NAIA Division II level, went 31-3 this season and was ranked No. 1 in the coaches poll heading into the national tournament. The Coyotes went 20-0 in the Cascade Collegiate Conference, won the conference tournament, and defeated Northwestern (Iowa) in the opening round of the national tournament before the NAIA, like the NCAA, canceled all of its events due to COVID-19 threats.

Still not a bad way for Bradshaw to begin his coaching career. But before all of that, he still wasn't sure it was a profession he ever wanted to do.

"I thought maybe I could get into high school basketball, but I really wasn't too sure if I wanted to coach or not," Bradshaw said. "After the student assistant with Montana and taking the year off, I honestly didn't know if I wanted to.

"I wouldn't say college coaching was always on my mind, but definitely something that the last couple of years that really took a focus for me."

Bradshaw's basketball path always pointed to him getting into coaching at some point. His father, Dave Bradshaw, coached basketball for more than 30 years, as well as more than two decades as the boys coach at Corvallis. After a standout career at Corvallis High School, Bradshaw spent one semester at Utah State of the Mountain West, where he appeared in the team's fall exhibition in 2012 before opting to transfer. He came back to Montana and spent three seasons with the Grizzlies, playing for Wayne Tinkle in his final year at the helm and the first two seasons of Travis DeCuire's tenure.

"He's the son of a coach and anytime you grow up in a household with someone that sees the game for a coach's point of view has that in their blood and genes," DeCuire said. "We've always thought of him as someone who understands the game, loves the game and knows how to communicate the game."

Then in 2016, Bradshaw opted to leave Montana for Rocky Mountain College in search of more playing time his senior season.

After Rocky, Bradshaw made his way back to Missoula and worked as a student assistant for DeCuire where he finished his undergrad degree and held graduate assistant duties for the men's program. Bradshaw always wanted a degree from UM, and DeCuire knew that after the two spoke when Bradshaw left, so the two planned out a possibility where Bradshaw could come back after his final season at Rocky and get his degree from Montana while also finding a role with the basketball team. In that season with Bradshaw as a student assistant, Montana made the first of back-to-back NCAA Tournament trips.

"There was a large gap for a while where former players weren’t coaching and you always wondered who would be the next guy," DeCuire said, while highlighting Selvig and current UM grad assistant Jordan Gregory as other former Griz players who are beginning their coaching careers. "(Bradshaw) had feel for big picture and what it is you’re trying to accomplish on both sides of the ball but also the identification of a program and what they stand for, and I think that’s why he’ll be successful."

Bradshaw said holding so many roles with COI is the biggest similarity between the Coyotes and the experience he got in 2018-19 at UM. Scouts and recruiting were two major areas he grew. Other areas of his work include him being in charge of the team's home ticket list as well as meals on the road when he's not doing scouts. Camps have also been a big part of his responsibilities.

Bradshaw said DeCuire and UM associate head coach Chris Cobb have been big assets for him in the early parts of his coaching career. Both have given him advice while Bradshaw has used their styles to mirror his own.

The Griz coaching tree is a vast and interesting one, and one DeCuire especially is proud of. Now, add Bradshaw into the mix as another budding branch to that tree.

"It's been awesome for me," Bradshaw said. "I tell the guys all the time, I'm grateful for it and sometimes you forget how quick it really goes when you're playing and it did go quick for me. It's been exciting for me just getting back into the game itself and the learning curve and growing as a coach has been huge for me. I'm really enjoying the process of it all and just trying to continue to learn as we go."