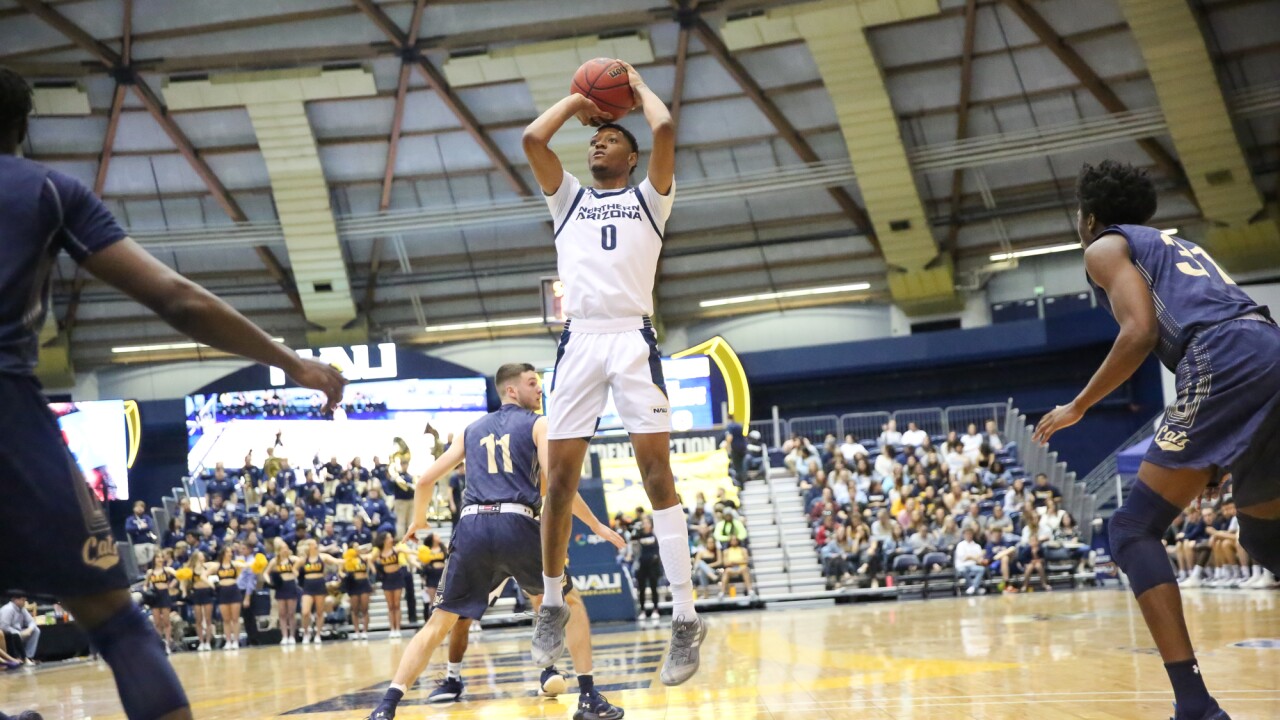 Maria Saldivar/NAU Athletics
Cam Satterwhite shoots a jumper for Northern Arizona against Montana State in the 2019-20 season. Satterwhite will join the Montana men&#39;s basketball team as a grad transfer in the 2020-21 season. 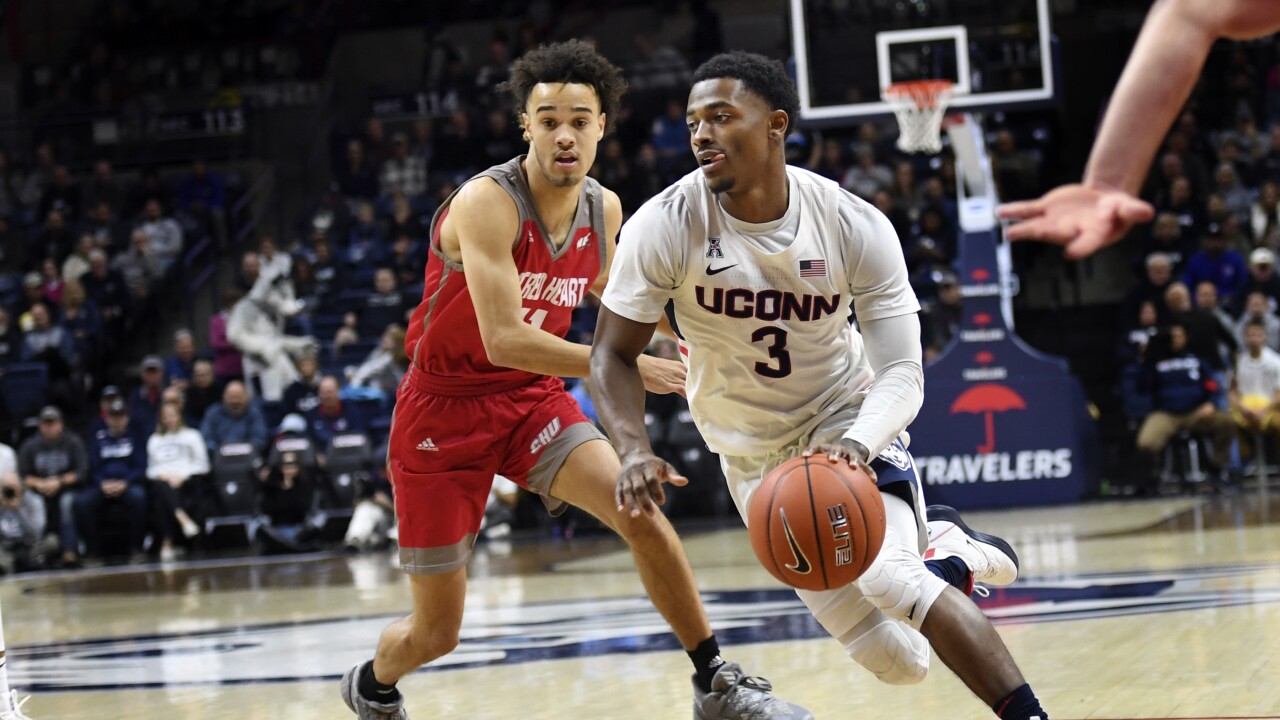 MISSOULA -- Cameron Parker and Cameron Satterwhite know there's a good chance both players might get their names mixed up with Montana men's basketball fans next season.

But neither mind, and in fact, both tend to go by Cameron or Cam, depending on where they are. How the two are referenced will be up to fans.

Satterwhite, in fact, has played with another Cameron at every school he's been at.

"It doesn't really matter to me," Satterwhite said with a laugh. "Whatever helps other people. But I'm going to call (Parker), Cam."

So when the two don Griz jerseys next season, there could be plenty of Cameron-to-Cam or Cam-to-Cameron connections -- or however you want to describe it -- in Dahlberg Arena.

Parker and Satterwhite were both officially announced by Montana as transfers to the men's basketball program on Thursday. Satterwhite joins the Griz from Northern Arizona as a grad transfer while Parker comes to Missoula from Sacred Heart in Connecticut and has two years of eligibility remaining.

Both sport different backgrounds and roads that bring them to Montana at the Division I level. Satterwhite, who hails originally from Gilbert, Arizona, is a rare in-conference transfer for the Big Sky. He spent two seasons at NAU and became familiar with how the Griz do things as a conference foe.

"The main reason I left NAU was because I felt like I could do more at another program and leave more of an impact," Satterwhite said. "In the beginning I had no idea where I was going. I just tried to seek out the best option for me academic-wise with grad school and a good basketball fit.

"Montana recruited me very quickly and early, so I built a relationship with them very early so I just felt comfortable. It just felt right to me and I felt like I could make an impact next year."

When NAU visited Montana on Dec. 28, it was the first time in the season Satterwhite started for the Lumberjacks. He scored 10 points and grabbed five rebounds in Dahlberg. Satterwhite said Montana's facilities and ability to develop him even more as a basketball player also stood out.

The 6-foot-4 Satterwhite averaged nine points and shot at a 38 percent clip for the Lumberjacks in his lone season on the court in 2019-20 in Flagstaff after redshirting in 2018-19.

But what makes Satterwhite's career unique is where he started his college career. After initially committing to Colorado, Satterwhite instead spent his first two seasons at Loyola Chicago, and as a sophomore in 2017-18, the Ramblers were a prime Cinderella team as they advanced all the way to that year's Final Four as a No. 11 seed.

Satterwhite played 10.4 minutes per game for the Ramblers that season and the experience of that run is something he'll never forget.

"It's every Division I college player's dream to play in the Final Four, let alone even get to the tournament," Satterwhite said. "I was blessed to go that far into the tournament. I still talk to those guys to this day.

"We were very disciplined and close and we believed in ourselves. Half of the battle is mental, especially when you're considered a Cinderella team going into the tournament and everybody has you losing first round because you're playing these big ACC, SEC schools. So it's not getting caught up in that. You're here for a reason. It's the best teams in college basketball at this time and anybody can win, and it's about having that mindset."

And that experience is something he believes he can bring to the Grizzlies.

"It's not a foreign aspect to get far in the tournament," Satterwhite said. "It's just we got to believe coach's system and believe in ourselves that we can do something and not get caught up in all of the things that don't matter but the game."

Satterwhite said he ultimately wants to get a master's degree from Montana and is looking to go into journalism.

Parker, who originally hails from Beaverton, Oregon, spent two seasons at Sacred Heart where he developed into one of the best passers in Division I basketball. On December 1, 2019, Parker cemented that feat by becoming the men's NCAA Division I record holder for assists in a game with 24 against Pine Manor.

"It was definitely a very tough decision for me," Parker said. "I picked Montana because they've been trending in an upward direction as of late. They have a great coaching staff. At Sacred Heart we only had like 400-600 people that could come to the games and Montana has a really good fan base. I know they're passionate about the football and basketball games so I'm just excited to go out there."

Parker's cousin is standout Griz receiver Samori Toure, who was named an FCS All-American last year for Montana. So while he hasn't physically been to Missoula, he's heard plenty from his relative about what UM has to offer.

A big reason Parker opted to leave Sacred Heart despite the success he was having was the proximity to home. He said his family wasn't able to get to see him play as often as he'd like, so he chose to head back to the western side of the country.

"I just wanted to be closer to them and wanted them to see my games," Parker said. "I'm getting older and they're getting older, as well, so I think that's a big part of what made my decision, as well."

Parker, who stands 6-2, graduated from Jesuit High School in Portland where he was a three-year starter and averaged 25.5 points and 6.1 assists per game as a senior. Then, he spent one year at Tilton School, a prep school in New Hampshire. Tilton is the same school Nerlens Noel and Wayne Selden Jr. also prepped at. Parker said the move away from home to a different part of the country helped expose him to more in the world and allowed him to grow up even more. He played alongside Michael Carter-Williams' twin brothers Marcus and Max Zegarowski and got to know the family well. Marcus currently plays at Creighton.

Parker took Tilton to the Final Four of the National Prep School Championships and set new school records for assists in a game and season. Then, he joined Sacred Heart the following year.

That passing ability stands out as Parker's biggest strength and is something he said he's had since the beginning.

"It's just my feel for the game. Some of that stuff you can't teach, but I also work with my dad and my grandpa and I had a lot of good AAU coaches and trainers," Parker said. "That helped me know that once you get past the first guy there's going to be another guy open. I actually like it better when I get the assist versus hitting a 3 or getting a layup or anything like that.

"It helps my team chemistry a lot because who really doesn't want to play with a person that's looking for you to score."

Parker added that he's excited to play for a coach like Travis DeCuire who is Montana's all-time assist leader. Parker has also filed to be eligible right away for Montana and is confident that will happen.

Both are excited to see their games grow even more with UM. Parker said he's ready to see himself grow in a variety of areas while Satterwhite, an explosive athlete, said he's going to feel more comfortable off-ball than in the past, especially with Parker as a teammate.

"Cam speaks for himself. Great passer and point guard and high-IQ player," Satterwhite said. "I feel like we'll complement each other well."