ROY — It was a special kind of Father’s Day at the 65th annual Roy Open Rodeo.

Dads roped with sons, families bonded – but regulars were quick to point out that the crowd was slightly larger than normal.

Many were there to watch Carson Patten, a 20-year-old cowboy with Down syndrome from Lewistown who was competing in his first rodeo. And while Carson quietly prepared for his team roping debut, his family and roping partner Shawn “Tater” Erickson were a ball of nerves.

“All of my wonderful friends kept telling me, ‘Hey, just make sure you don’t miss,’” Erickson said. “And I was like, ‘Thanks, I didn’t have enough pressure, now I really have the pressure.’”

Carson’s father, Carl Patten, could be found pacing the grounds, chatting with friends and passers-by in an attempt to calm himself down.

“I was a little nervous,” Carl admitted with a chuckle. “I took video of the sky and the mountains and kind of jumped around a bit.”

And though his family and everyone around him was worried about what might happen. Carson himself was solely focused on the task at hand. And as friends and fellow competitors wished him luck, this cowboy in him was locked in.

Erickson watched in awe as Carson went through his preparation and kept his poise. The Roy Rodeo is a small event, but to Carson it was his national championship. His moment.

“We’ve been so worried about him being nervous,” Erickson said. “But (Sunday) was the most calm I’ve seen him all week. He knew when to bring it down. That’s a true competitor.”

As the stock crew loaded a steer named “Buttercup” into the chutes, Carson and Tater made their way to the roping boxes. Several former NFR competitors, college and high school champions and current professionals were in attendance and made their way closer to watch.

“That’s one of the things that was special,” Erickson recalled. “When I looked through the heeling box and seen all the real cowboys, every one of them had come up to see what Carson was doing. At no other event had they done that. That’s powerful.”

And just like that, it was time. Carson gave a quick nod of his head, and the gates opened.

Buttercup trotted into the arena slowly. Carson and his horse Casper shot out ahead, rope swinging in the air.

The header and his mount doubled back – he had Buttercup in his sights. Carson threw his rope and hit horns, but the loop fell to the ground. This ride would end without a catch.

But that’s just a footnote.

Carson Patten had paid his entrant fees, stood tall in the saddle, and competed against several veterans and champions. And after the ride emotions got the best of him, Tater and the rest of the Patten family.

“I’m very proud of my horse,” Carson said with a smile. “This was awesome. I’m excited to do it again next year.” 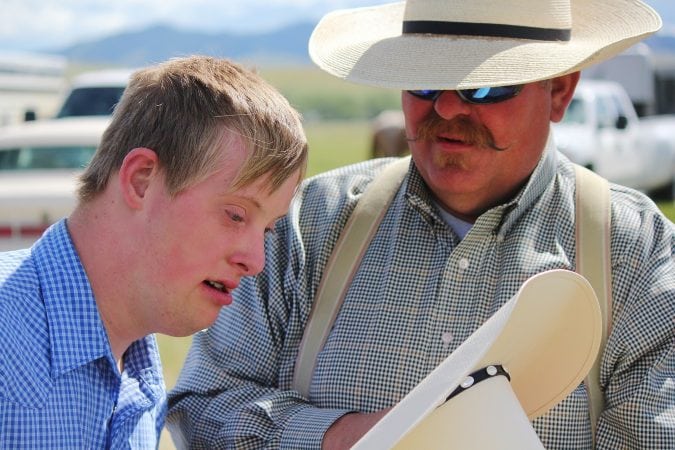 Erickson couldn’t be more proud of the way Carson worked toward achieving his goal.

“It was just a culmination,” he said fighting back tears. “We’ve been building on it for almost three years. Just to watch that progression to move through each stage. And we didn’t give it to him at all. It’s really a credit to Carson to helping us all reach for that dream.”

The Roy Rodeo committee made sure Carson walked out of the arena with a shiny new belt buckle to show everyone that he’s a real champion.

His eyes lit up.

“The buckle is the coolest buckle,” Carson said. “It’s a buckle for a grand champion.”

And given it was Father’s Day, Carson dedicated his performance to one very proud dad.

“Father, thank you for taking me hunting and taking me to rodeos,” Carson said. “This is a Father’s Day present to get him happy, not grumpy.”

“I’ve never had a Father’s Day quite like this one,” he said before pausing.

“I think sometimes God gives you what you need,” he continued. “And I think what we’re seeing here and what’s happening now is just a part of doing those little things right. At times at the beginning it was kind of like, ‘What will he be able to do?’ But now it’s like, ‘What are we going to be part of? Where are we going next?’”

Hard to tell, but it’s certain that Carson and his team will put in the work to get there.