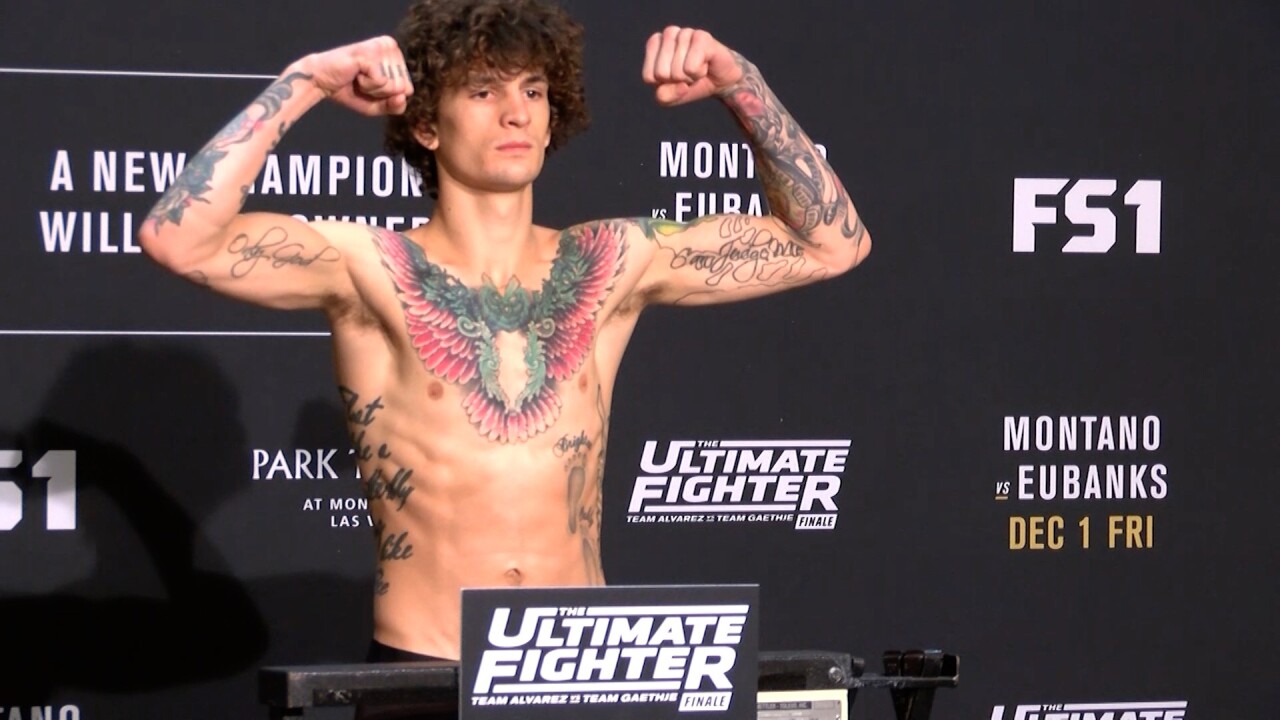 MISSOULA -- Mixed martial arts is arguably the most niche sport out there in terms of fandom.

Seemingly always growing in popularity, the hardcore fanbase is not as big as the four largest North American sports in football, basketball, baseball and hockey, but rivals those larger entities in sheer passion.

"It is kind of like a nerd fandom that once you get really into it it goes all year round and can kind of consume you really easily and you get so into talking about it with the other people who are into it," Ben Fowlkes said.

Fowlkes and fellow Missoula resident Chad Dundas are writers who both have covered the UFC for a number of major media outlets. Most recently, both were employed at The Athletic before layoffs during the COVID-19 pandemic hit Dundas. Fowlkes continues to write for the website.

But aside from being well-known sportswriters in the MMA community -- and authors in Montana to others -- the two run one of the most popular podcasts in the sport that has grown from what started as just two friends talking about fights.

And as sports like baseball and basketball begin to slowly get going again, the UFC acted quickly and got back up and running in May, so Dundas and Fowlkes have had plenty to talk about.

"From a journalistic standpoint, it's really been a gold mine for us," Dundas said.

The two met as graduate students at the University of Montana. Dundas originally hails from the Garden City while Fowlkes was raised in Southern California before ultimately making his way north for school. The two met at UM in 2005 and immediately found a connection with their MMA fandom.

"I remember showing up to one of the first gatherings for the MFA program and I pulled up in my crappy old truck and got out with like a 12-pack of Pabst Blue Ribbon," Dundas recalled. "I looked up the block and this other guy was pulling up in his crappy old truck with a 12-pack of Budweiser or Bud Light or something, and we both looked at each other, and I think at that moment we were both sort of like, 'OK, I might get along with this person.'

"The last thing that I expected when I showed up to grad school for English was to meet another MMA fan."

"I believe it was Keystone Light that I was bringing to that party," Fowlkes corrected with a laugh. "But Chad is correct."

A friendship quickly formed thanks to those similar interests. After they graduated in 2006, the two went their separate ways in terms of work and began getting involved covering the sport. Dundas' career started as a sportswriter at the Missoulian and Missoula Independent before moving on to ESPN, Bleacher Report and The Athletic to cover MMA. Fowlkes worked for USA Today and with Sports Illustrated online before also joining The Athletic.

"Ben’s wife, who is the very funny local comedian Sarah Aswell, was like, 'You guys are always talking about this stuff anyway, why don’t you just start a podcast?'" Dundas said. "And so that’s what we did. We kind of jumped into it without any knowledge at all of the form or technology involved."

"We initially were resistant to the idea of starting a podcast," Fowlkes added. "It just felt like two more dudes who think that everyone needs to listen to hear them talk.

"It was an attractive idea to have something that, this was just ours and we could do whatever we want with it. If we want to take a week off we can. If we want to add other aspects to it we can, but that nobody can take that away from us."

And so, the Co-Main Event Podcast was born, and over eight years has turned into a popular MMA podcasting choice among combat sport fans. It is one of the first MMA podcasts that appears when searching on Apple Podcasts under wrestling or MMA, among other platforms.

Thanks to their professions as MMA journalists, the CME fanbase is as loyal as it gets to Dundas and Fowlkes, with discussions ranging from serious issues to recent debates about fighter pay and labor unions to light-hearted jokes about what’s going on in the sport in its new form of normal of no fans and masks everywhere. And of course, the happenings they encounter with life in Missoula.

"I don't think we're the biggest MMA podcast out there just in terms of numbers, but I think that we have a very loyal listenership," Dundas said. "We've also been blessed in that I think we have a lot of really smart listeners who like to think and talk about the sport the same way we do."

That comes from talking about harder subjects that some fans don't want any part of.

"If you're the kind of person that doesn't want to think about whether fighters are being treated fairly by promoters or you don't ever want to think about long-term health consequences of the sport, then we're not the podcast for you," Fowlkes said. "We end up talking about those things a lot."

And there's been a market for that, with fans reaching out and interacting with them frequently. For UFC 251, the last live pay-per-view event earlier in July, Dundas and Fowlkes hosted a watch party over Zoom with many people joining in and offering their perspectives while also enjoying the fights with the two.

A lot of their work for national outlets covering the sport has been based in Missoula. So when communicating with fighters for stories or when it comes to their listeners, they can be somewhat caught off guard when they see where Dundas and Fowlkes operate out of.

"People are always very confused when they find out that we both live in Missoula, Montana," Dundas said. "The podcast is headquartered out of here and that we both have worked as MMA writers from Montana."

"And it sort of blows people’s minds that you can be in a media field and working for big media companies and be in a place like Missoula, Montana, which to a lot of people in New York and L.A. and San Francisco sounds like it might as well be on the moon it’s so far away," Fowlkes added. "When you're an MMA journalist and you're contacting people and trying to set up phone interviews and they see the 406 area code, and people just generally don't know what that is."

Outside of their work with the podcast and as journalists, the two also write fiction for a number of publications. Dundas has had two novels published, Champion Of The World and most recently, The Blaze, which was published in January, and is aiming to debut a true crime history podcast in the fall. Fowlkes also writes fiction short stories and has a graphic novel in the works on top of his work with The Athletic.

When it comes to their MMA coverage, there’s been a local angle for them too, as Helena native Sean O’Malley continues to rapidly rise to stardom in the UFC. The UFC has tabbed him as one of its upcoming stars, and O’Malley plays the game well both inside and out of the octagon with his understanding of self-promotion, and Dundas and Fowlkes believe he could go a long way in the UFC.

"Sean O’Malley has been the one where you look at what he’s done so far and you think he could rise pretty high in this sport," Fowlkes said. "When you do see someone come out of Montana and he's doing really well, you want to see him go really far with it and he's an exciting fighter to watch."

Plus, it's enjoyable for them to watch a local guy find success after starting his career independently in Montana. O'Malley is scheduled to fight again on the main card of UFC 252 on Aug. 15.

"I think we probably secretly, not-so-secretly root for those guys to do well on the main stage, not because we’re necessarily friends with them or they would even know us if they saw us walking down the street, but just because of home state pride," Dundas said. "We want to see the Montana guys represent on the big stage for sure."