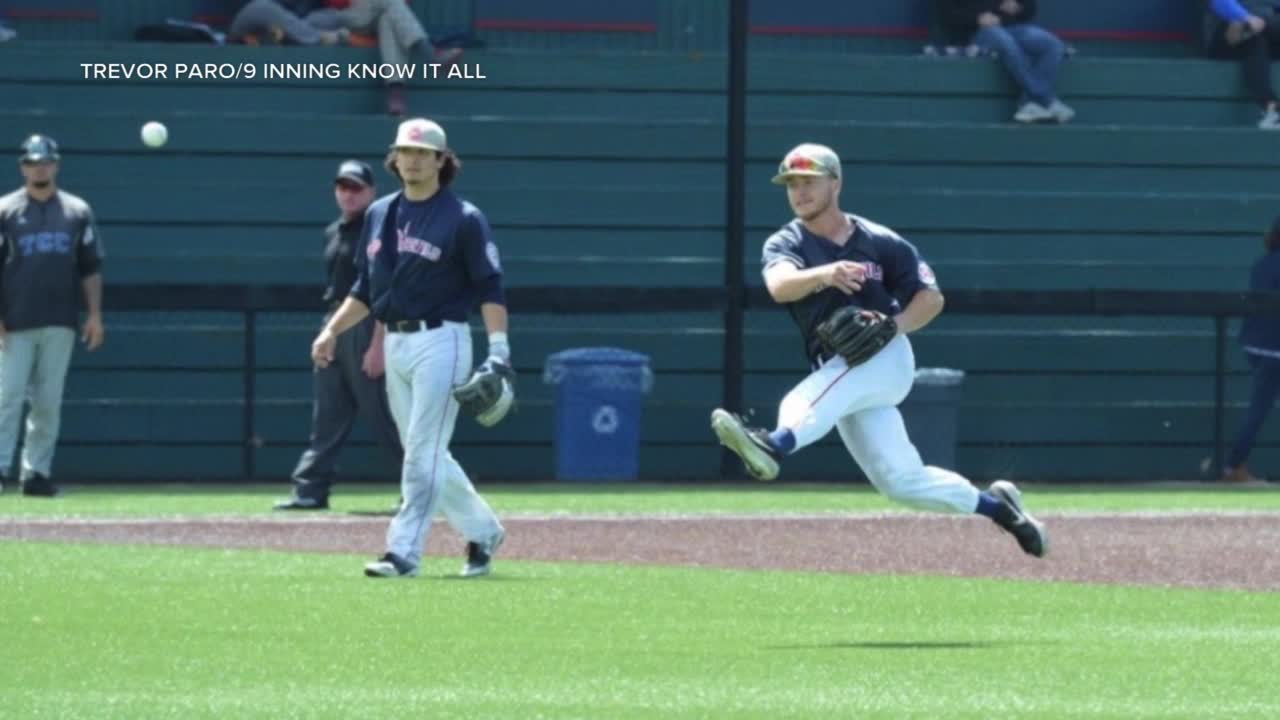 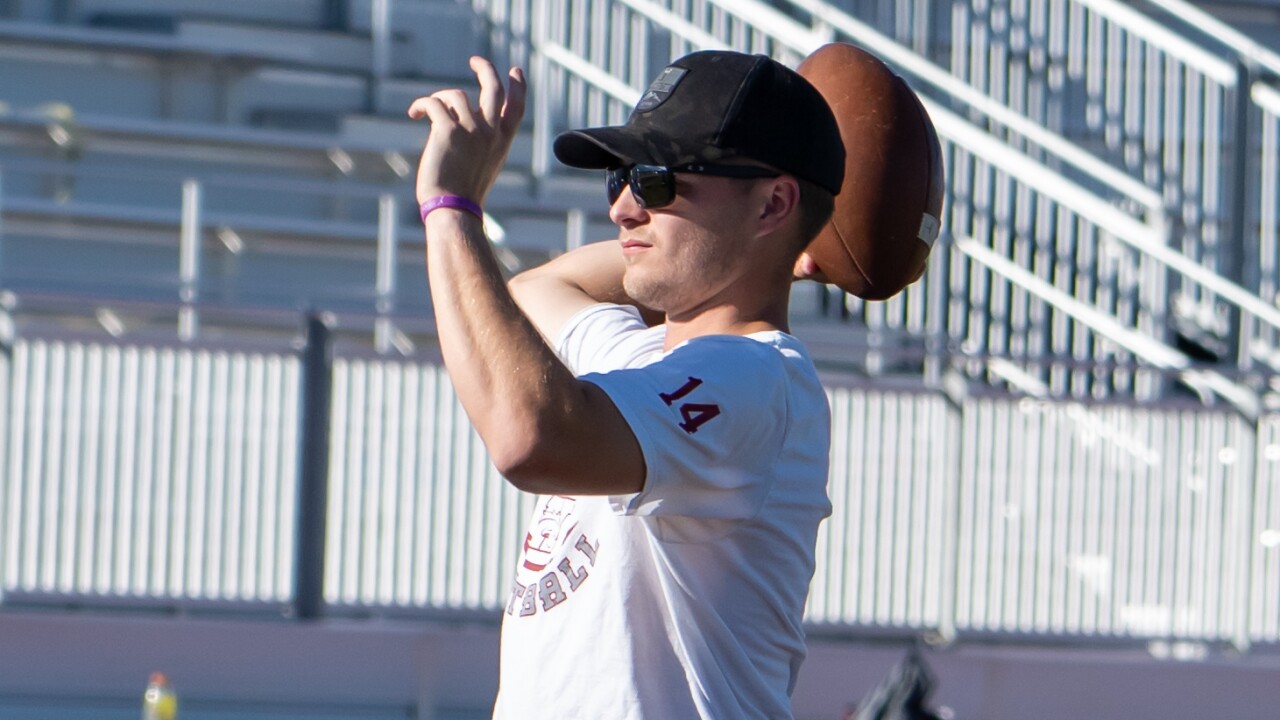 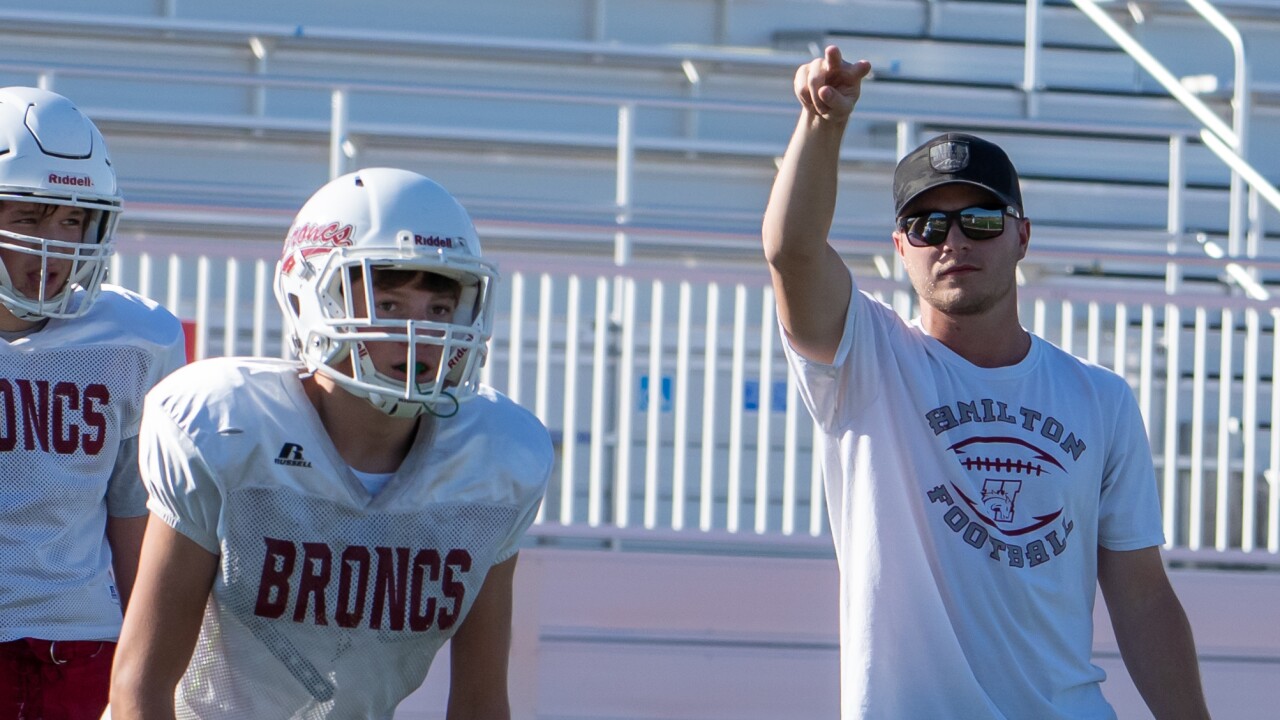 HAMILTON — Trevor Paro could only laugh.

The Hamilton football assistant coach knows he comes from a small-town background and that the football he grew up playing was different than the Class A level he now coaches.

But the Hamilton players might not know a record-setting former 6-Man star and former NCAA Division I baseball player now walks their sidelines coaching the Broncs' running backs and defensive backs.

"They've brought it up. They ask me questions about 6-Man because I'm sure a lot of them have never heard of it or never seen it been done," Paro told MTN Sports on Wednesday afternoon before football practice. "They ask me how it was, my high school career, and what I've done."

What he's done is rewrite the record books. Paro scored 56 touchdowns, a single-season record in Montana, as a senior in 2016 as the Savage Heat won the 6-Man title. He ended his career with a record 135 touchdowns.

"They kind of open their eyes like, 'What?'" Paro said with a smile. "So it's kind of funny getting that side of things, especially with the freshmen because they have no idea, so it's been really cool."

Sports fans remember Paro's season and Hot Springs' run in 2016 well. After that season, Paro went on to Lower Columbia College in Longview, Washington, for two seasons to begin his college baseball career.

After two seasons there, Paro accepted an offer to play baseball at Division I Marshall University in Huntington, West Virginia.

However, after one semester at Marshall, a nagging shoulder injury caused Paro's DI dream to come to a close prematurely, a decision that didn't come easy but one Paro felt he needed to make.

"Obviously it was torn, but I think it just plays a mental role on you, too. Just going through that pain like that throughout those many years, it was just time," he added.

Paro partially tore his labrum in his left shoulder as a senior in high school in football. As time went on, Paro played through the pain, though it continually got worse. After falling on it awkwardly while playing fall ball at Marshall, the labrum completely tore and a tear was found in his bicep, too.

Paro's options were limited to playing through pain, getting surgery and rebuilding from square one or hanging up the cleats altogether. Ultimately, he decided on the latter. So in January, Paro moved back to Montana and got surgery in Missoula and has begun life back in his home state.

Initially, that realization and decision was tough to grip, especially after all of the work Paro put in. He traveled all throughout high school as a four-sport athlete to make baseball work in places like Polson or Spokane, Washington, and, at LCC, his team won the Northwest Athletic Conference title both seasons Paro was there.

Being a small-town kid from Hot Springs, a town of just more than 500 people, opportunities like Paro's are rare and tough to give up. Paro said the Marshall coaching staff was supportive and understanding of his decision but was sad to see him go because the team saw him as their second baseman of the future.

"Definitely when you get surgery and you’re laying there, your mind starts wandering and your thinking what if, should I go back," Paro said. "But once I got healthy and I started doing things that I really love, like hanging out with my friends, doing some hunting and fishing, that’s kind of when I realized that this is where I want to be."

But Paro felt like the injuries were holding him back from his true potential and also taking his love of the game away from him. Paro admitted to even considering hanging up his cleats after his first season at LCC due to the shoulder injury and being unable to consistently play. After initially realizing what he felt was best, Paro talked it over with his roommate at the time at Marshall, then brought it up to his parents.

"That’s probably the hardest conversation you have," Paro said. "Your parents are there to help you and push you that whole time making your dream into a reality. Telling them that you can’t go anymore, it’s heartbreaking.

"Coming back to Montana, I love to do my hunting and fishing. It was just kind of a good ending point for me. We ended on two NWAC championships at Lower Columbia. Went to Marshall, so I completed my Division I baseball dream, and at that point just putting in that work that would be starting from ground zero where I just have to build up all the muscle, I’d have to get my swing back. It would be a whole different rebuilding process and not saying I couldn’t do it, but it was just kind of something where I was like, 'It’s good to be back in Montana and doing the things that I truly love.'"

While healing from surgery, Paro coached boys basketball in Hot Springs in the winter and this fall accepted an assistant coaching job with Hamilton's football team. He's finishing up his teaching degree through Montana Western and is also working as a paraprofessional at Daly Elementary School in Hamilton.

"Our defensive coordinator, Jake Hayes, is actually his brother-in-law. They’ve been a family for a long time back to when Trevor was in high school, so it was kind of fun as a staff to follow Trevor’s success he had at Hot Springs," Hamilton head coach Bryce Carver said. "Sitting down and talking with him you can tell that he knows the game, whether he played 6-Man, 11-man, doesn’t matter. As soft-spoken as he is and good relationship-builder he is with the kids, he was a great addition to our program."

Paro's shoulder fully recovered by the spring and early summer, and he added that some baseball and football coaches checked in on him regularly to see if he'd be interested in competing again. He added that he enjoyed his time and experience playing baseball over at Marshall and was appreciative of the support from his friends, family and hometown in his journey to that level of competition and back to Montana.

While the injury was an unfortunate ending for Paro, the new beginning has been a breath of fresh air.

"Like I told them, I’m at peace with it. And they just wanted to make sure I didn’t have any regrets, and I feel like I had a successful college career that I’m going to live the rest of my life without any regrets," Paro said.