WOLF POINT — It happens late at night on ESPN’s SportsCenter.

As the 11 p.m. show comes to a close, longtime anchor Kenny Mayne will offhandedly mention a score or a team from eastern Montana that causes most viewers, and even some colleagues, to scratch their heads.

Sometimes he’ll give a shoutout to Poplar, other times he’ll announce a Glasgow Reds Legion baseball score over the air.

“It keeps it fun, it doesn’t throw your concentration off,” Mayne told MTN Sports about the eastern Montana name drops. “I think the Montana esoteric references they just kind of happen.”

Mayne has an eastern Montana hook-up who feeds him the scores. His best friend Mark Sansaver lives in Wolf Point and will text him results of random games to include in the show. But the relationship between Mayne and Sansaver goes much further than the funny, light-hearted moments you see on TV.

Sansaver is Mayne’s best friend. They met in the Seattle suburbs in the late 1960s and bonded instantly. Both of them were 10 years old and full of life.

“Kenny was probably rolling by on his bike and saw me and my brothers playing and jumped right in,” Sansaver said. “Being in the same grade, we became fast friends. He only had sisters, so I was like his brother.”

“We literally played wiffle ball all the time,” he said.

They would mostly play at Mayne’s house on Star Lake. Mayne, Sansaver and the rest of the neighborhood kids spared no effort to make their games special. Lines were made with flour, they would pilfer advertisements at grocery stores to hang them on the fence to emulate outfield banners. Mayne’s sister would even sing the national anthem before games.

“We would light off firecrackers and play it off like we were doing a big thing,” recalled Mayne. “And then we would essentially play, almost all day every day during the summer. And then we’d take breaks and go swimming and go back up and play the night games. We put in some hours into wiffle ball.”

It was on the wiffle ball fields that the legend of Mark Sansaver was born. According to Mayne, the league’s unofficial official stat keeper, Sansaver blasted more than 800 home runs over the course of one summer (give or take 30 or 40 due to illegal use of a non-regulation plastic bat).

That power made Sansaver the “true home run king” in Mayne’s eyes, a feat that put his name above baseball luminaries like Babe Ruth and Hank Aaron. That record would later land Sansaver recurring mentions on ESPN, beginning when Mayne was first hired at ESPN2 in 1994.

“He did a couple radio interviews with me, over the phone about breaking Lou Gehrig’s consecutive hits record, Babe Ruth’s home run record,” laughed Sansaver. “And I’d just go along with him because I knew it’s for fun.”

Though life took the two friends in separate directions after high school (Mayne played football at UNLV, Sansaver at Montana State), they stayed in regular contact and never let more than a few weeks pass without a phone call or a visit.

And when Sansaver married his wife, Kelli, in 1985, Mayne was there providing color commentary during the (you guessed it) pre-wedding wiffle ball game.

But when Sansaver reached his mid-30s – what should have been the peak of his natural athleticism – he felt a change in his body.

“I felt it playing softball,” he recalled.

It didn’t take him long to realize what was happening.

“I have two older brothers with muscular dystrophy,” Sansaver said. “You test for it, when I was in Idaho we tested for it and they came up with different creatine levels, so I kind of knew it was coming. When I kind of started slowing down, I knew.”

It took a toll. The progression started with weakness, then required a brace and now Sansaver is confined to an electric wheelchair as the disease attacks his muscles.

“It affects everybody,” Sansaver said, suddenly emotional. “Family, friend and, of course, Kelli helping me with everything.”

Mayne remembers hearing the news for the first time in 2001. 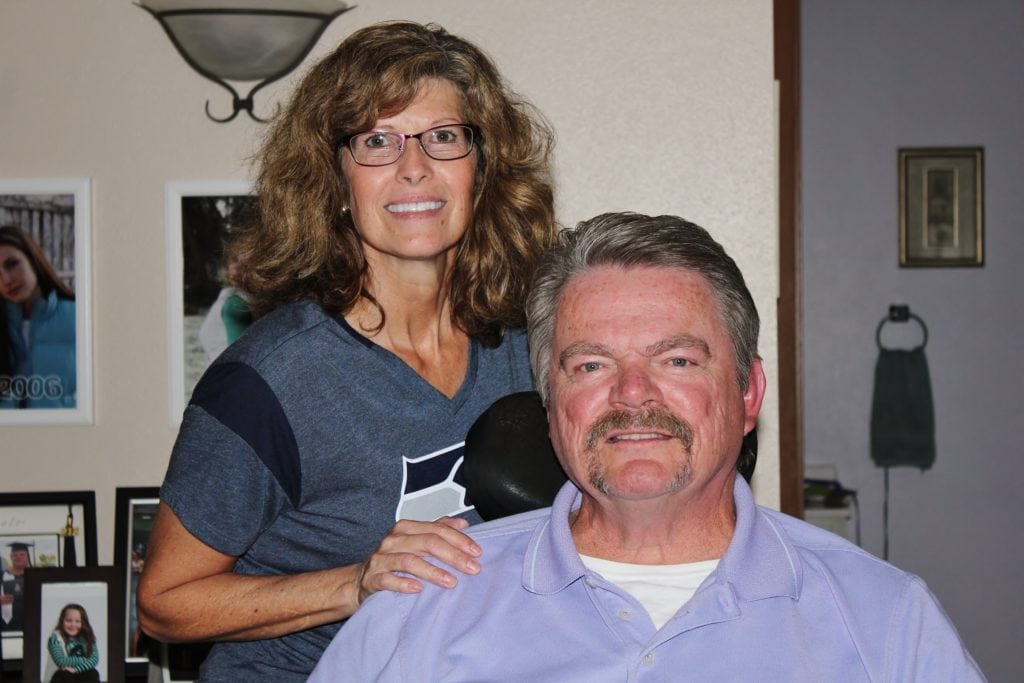 “It hit me like a ton of bricks,” Mayne said. “The irony of it. Here’s a guy that was a great natural athlete, barely had to work out and he was the fastest guy out there, and gets hit with something like this that takes away that ability.”

Mayne had physical struggles of his own. He tore up his ankle playing college football and lived with pain every day, often feeling sorry for himself. When he heard about Sansaver’s fight with MD it put things in perspective.

“It was definitely just another signal,” said Mayne. “A reminder to be happy for what you have, as opposed to complaining about what you don’t have.”

And that’s exactly how Sansaver lives his life. When he started to slow down physically, he left his job in marketing and returned to Wolf Point with Kelli and his three daughters. And life is good. Sansaver works full-time at the Greater Northern Development Corporation and spends as much time as possible with his four grandchildren.

Sansaver is an Assiniboine tribal member and gives back to his community at every opportunity, serving as a role model for many residents in Wolf Point and beyond.

“I see the positive and I realize the negative,” said Sansaver. “I realize the stereotypes and I know the issues. I can control what I do with my family and friends and then if I can help, I will in any way I can.”

Muscular dystrophy has changed Sansaver’s life, for sure. But it doesn’t define him.

“You get up every day and Kelli gets me ready and you go to work,” explained Sansaver. “I got my Master’s degree not too long ago. It’s just part of life. In a lot of ways I’m more focused about what I do, helping the community here and whoever I can. They’re working on cures for MD all the time, working hard at it. If it happens in my lifetime, great. If not, then hopefully the next.”

“Mark is one of those guys that I can go six months without talking to and we’ll get on the phone and nothing has changed,” said Mayne. “The perseverance he’s shown inspires me. Everybody has a unique story. Mark is the same.”

So the next time you hear Mayne mention a town or team in eastern Montana on SportsCenter know that there’s a family in Wolf Point smiling – knowing they are never far from his mind.