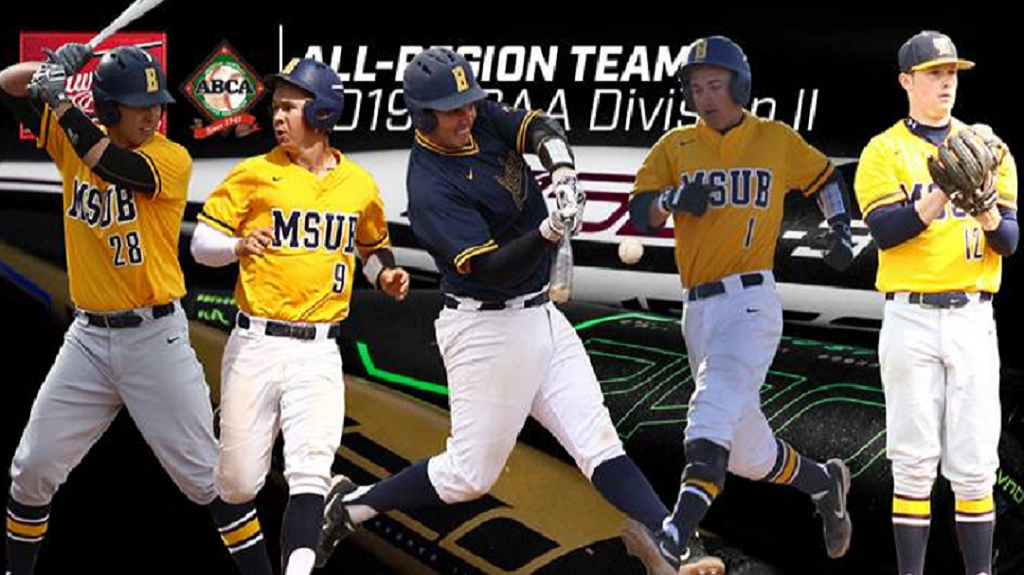 It was the third all-region honor of the season for four of the five Yellowjackets, marking the most consensus all-region selections in a single season program history. Cipriano, Dillon, Garcia, and Setian were each also honored by both the National Collegiate Baseball Writers Association, and the Division II Conference Commissioners Association earlier this month. Fredrickson appeared on two of the three all-region teams, as he was recognized by the NCBWA as well.

In his final at-bat of the 2019 season, Cipriano tied the Great Northwest Athletic Conference record and broke the MSUB record for home runs in a season with his 18th. That total is tied for the second-most in the NCAA D2 west region, and Cipriano’s on-base plus slugging percentage of 1.356 was the top mark in the region. He won just the second Triple Crown in GNAC history, leading the league in batting average (.405), home runs (18), and runs batted in (52). He also paced the league in runs scored (59), slugging percentage (.827), on-base percentage (.528), and a record-breaking 27 hit-by-pitches. Cipriano was a unanimous first-team all-GNAC pick and the league’s Player and Newcomer of the Year.

Garcia wrapped up one of the best careers in MSUB history. The senior hit .354 with 14 doubles, four triples, nine home runs, and 33 RBIs. He also led the team with a dozen stolen bases, while slugging .605 and getting on base at a clip of .400.

The Billings native started 47 games in center field, and scored 42 runs while collecting 69 base hits. Garcia’s career batting average of .346 was No. 3 in school history, and he was also in the top-five in runs, hits, doubles, triples, home runs, RBIs, total bases, and steals. This is the second straight year Garcia has earned all-region honors, as he was a consensus all-region selection during his 2018 campaign.

Setian was one of the most dangerous leadoff hitters in the region, combining contact and power for a standout sophomore season. The shortstop batted .327, while slugging 19 doubles, a dozen home runs, and driving in 48 out of the leadoff spot. Setian started all 53 games – the most in MSUB single-season history – while racking up 45 runs scored, 71 hits, and 130 total bases. He also stole four bases, while getting on at a clip of .379 and slugging .599.

Setian was a unanimous first-team all-GNAC shortstop, and was a D2CCA and NCBWA second-team selection as well.

Dillon was a unanimous first-team all-GNAC outfielder, and he earned second-team all-region from the D2CCA and NCBWA earlier in May. Dillon ranked second in the GNAC this season with 15 home runs, while adding 13 doubles and driving in 42. The senior right fielder posted a slash line of .287/.413/.647, with his slugging percentage ranking second in the league behind Cipriano.

A native of Billings, Dillon started 49 games this spring while scoring 50 runs and drawing a team-high 29 walks. Dillon’s 19 career home runs were fifth-most in school history, and his career slugging percentage of .476 was 10th highest in school history.

Fredrickson earned all-region recognition for the second straight year, after ranking second in the region with 92 strikeouts in 2019. He led MSUB with 86 1/3 innings pitched, the third-highest total in MSUB single-season history. The senior right-hander went 7-2 on the year, posting a 3.96 earned run average and a .228 opponents’ batting average.

Fredrickson became the seventh player in GNAC history to reach 200 strikeouts, finishing his career at No. 7 with 209. He also wound up with 19 career victories, which was second-most in school history. He was a unanimous first-team all-GNAC selection for the second straight season.

MSUB’s baseball team went 33-20 overall and 30-20 in conference play in 2019, while winning the GNAC regular-season and tournament titles and qualifying for the first NCAA D2 West Region Championship in school history. The Yellowjackets’ 33 wins were a school single-season record, and their 30 wins in league play were a GNAC record.