(EDITOR’S NOTE: This story originally aired on November 9th ahead of Fairfield’s Class B semifinal game against Bigfork. The Eagles went on to beat the Vikings and advance to the State B title game where they capped off an undefeated season with a win over Missoula Loyola. It’s the fourth state championship in Fairfield history.)

FAIRFIELD – In the first half of Fairfield’s 34-6 Class B football playoff win over Manhattan on Saturday, Eagle senior defensive back Payton Becker sniffed out a fake punt, caught the deflected pass at the line of scrimmage and took off.

Sixty yards later, Becker, who was nursing an injured hip all week, scored his first-ever varsity touchdown to put Fairfield up 7-0.

“During the moment, it was wild. I felt the adrenaline rush as soon as it touched my hands,” he laughed. “I started running and just started taking looks behind me and just said, ‘Oh please, Jesus, don’t let them catch me.’ Because my hip started to cramp up a little bit. I ended up making the touchdown and I was excited.”

His team mobbed him in the end zone, energized by a defensive score that would spark the Eagles to a quarterfinal win and a spot in the State B semifinals.

One of the first players to meet Payton was his brother, Libien Becker, a star running back for the Eagles. It’s hard to tell who was more excited.

“I just saw an interception, I didn’t see who it was,” Libien recalled. “And then all of a sudden I saw Payton’s number. Right when I saw him running, I started booking it down to the end zone to celebrate.”

The two shared an embrace — something they’ve done countless times over the past eight years.

Payton and Libien don’t look like brothers to the naked eye. One is white, one is black. They were born in different countries and raised under different circumstances.

But their bond as brothers is rock solid, unlike the shaky ground it started on.

In 2010, the Becker family adopted Libien, then 9 years old, and his sister Guerna from Haiti shortly after the catastrophic 7.0-magnitude earthquake that rocked the island nation.

The two new additions came to Fairfield and joined the Becker family, which already included Payton, his parents, Kristen and Chad, and biological sisters Paris and Presley, making them a household of seven.

The old saying, ‘You can’t choose your family,’ doesn’t quite fit the Beckers. Payton hand-picked his brother from the New Arrival Orphanage in Port-au-Prince. The family originally thought they would adopt an infant, but when Payton saw Libien’s picture he knew instantly that Libien would join the family.

“On the computer, they had all these pictures of kids and I pointed at him, and I was like, ‘I want him to be my brother.’ I just had a feeling,” Payton recalled. “And it’s not always set in stone, you can’t just choose. They look at background. Usually they don’t let older kids join you and he was older than me, but they made an exception for us. Everything just worked out in the end and he came home with us.”

It’s still hard for Libien to put into words what the moment was like when he learned he would have a new family and new home. He was taken to the orphanage at a young age when his biological mother could no longer care for him. Life was difficult.

“I just made the best of what I had down in Haiti,” he said. “Playing with mud, taking dolls apart, opening seeds to make rice or something like that, playing with each other. We just played with anything we got. Looking back, it wasn’t a lot compared to what I have here, but looking back I can say I’m glad I kind of had that. Because now I enjoy the experience and everything I had while I am here.”

And when Chad and Kristen arrived at the orphanage in Port-au-Prince to see their new family members, it was love at first sight.

“I was highly grateful,” Libien recalled. “We were told we were adopted, but we hadn’t met our parents yet. And that day they came and saw me, I remember it: It was like the most exciting time ever, to know that I was adopted and my parents actually came to see me.”

Once safely back in Montana, the Becker boys bonded right away over a surprising shared interest.

“I think we really bonded over Spiderman,” laughed Payton. “He was a huge fan of Spiderman and I liked Spiderman, too, and that’s what we bonded over a lot, was superheroes. We still do now.”

“I saw Spiderman down in Haiti,” added Libien. “And it was just the best thing ever. Imagine a Haitian kid seeing a movie, which alone was amazing, and then it was a superhero that can fly in the sky like that, shoot webs.”

The two shared everything: a room, a cell phone, friends. Eventually athletics and football drew them closer together. Libien had never played or watched any sport but soccer growing up, so Payton was his guide.

“When we first started football, we both helped each other,” added Libien. “He helped me understand the game of football with my other friends. And I grew to love it.”

Their roles are on the Eagles’ football team are different. Payton is a reserve fullback and defensive back who contributes mostly on special teams and as a positive locker room presence. Libien is one of the top running backs in the state who provides an offensive spark for the powerful Fairfield ground attack.

Both are equally vital to team success.

“You can only put 11 men on the field,” said Fairfield coach Les Meyer. “But everyone is important from a freshman up to a senior. And that’s the one thing that Payton has brought every day, just a positive upbeat attitude, and he takes pride in what he’s doing. Then Libien is a great teammate and student. The experience that he’s had and the experience he’s brought to our kids, you can’t quantify it.”

Regardless of how their senior seasons end, the Beckers will remain supportive of each other and proud of one another’s accomplishments.

“It’s definitely a different relationship than most siblings have,” Payton said. “I can even see it between my other siblings, too. I don’t know if it’s because I haven’t known him my entire life, but I feel like it’s closer than most other relationships.”

“I always feel proud when people refer to us like that, as brothers although we’re different skin color,” he said. “Because friends will come and go, but brothers will stay.” 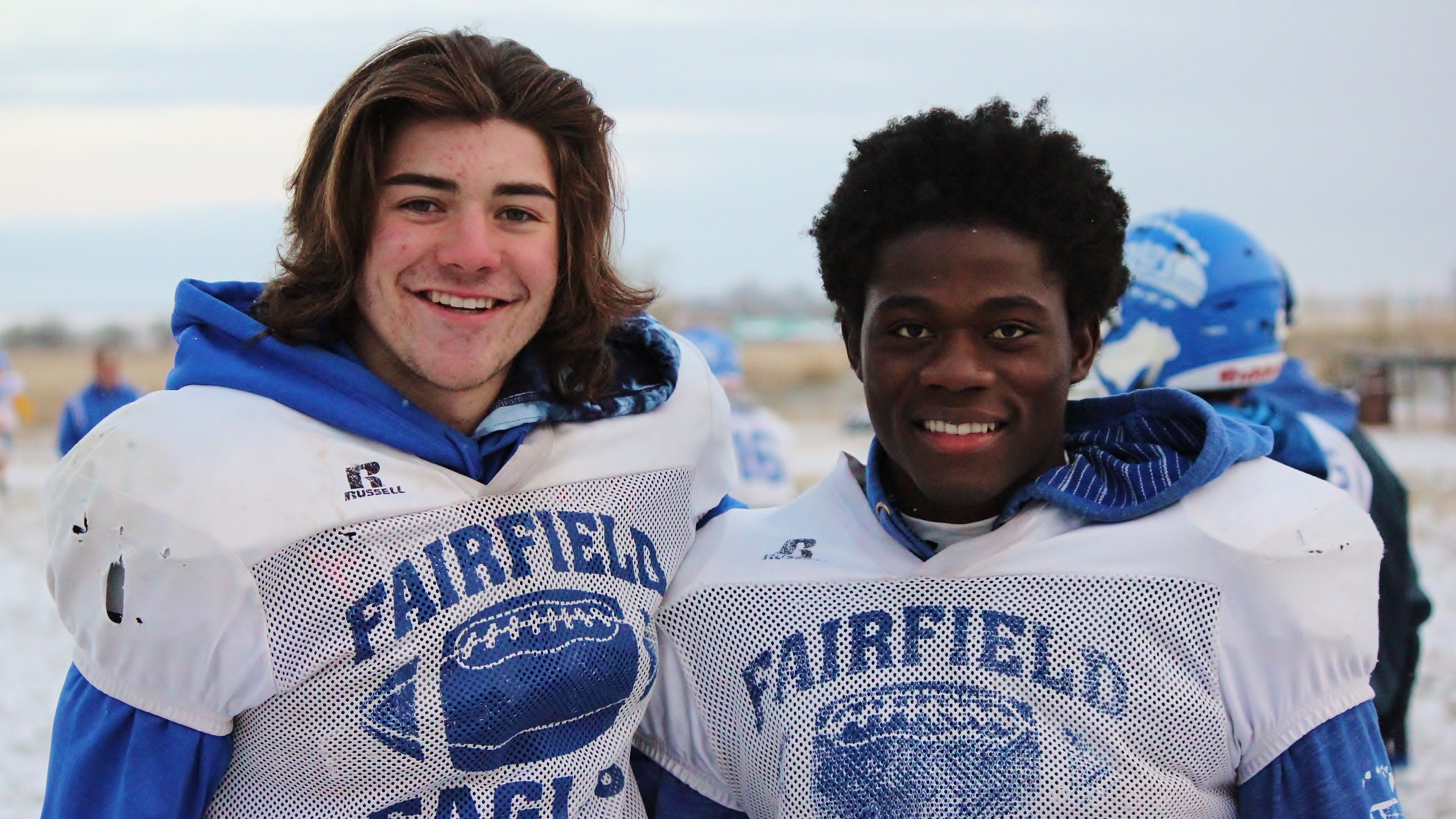 Payton (left) and Libien Becker have helped the Fairfield Eagles to the Class B semifinals. (TOM WYLIE/MTN Sports)[/captio