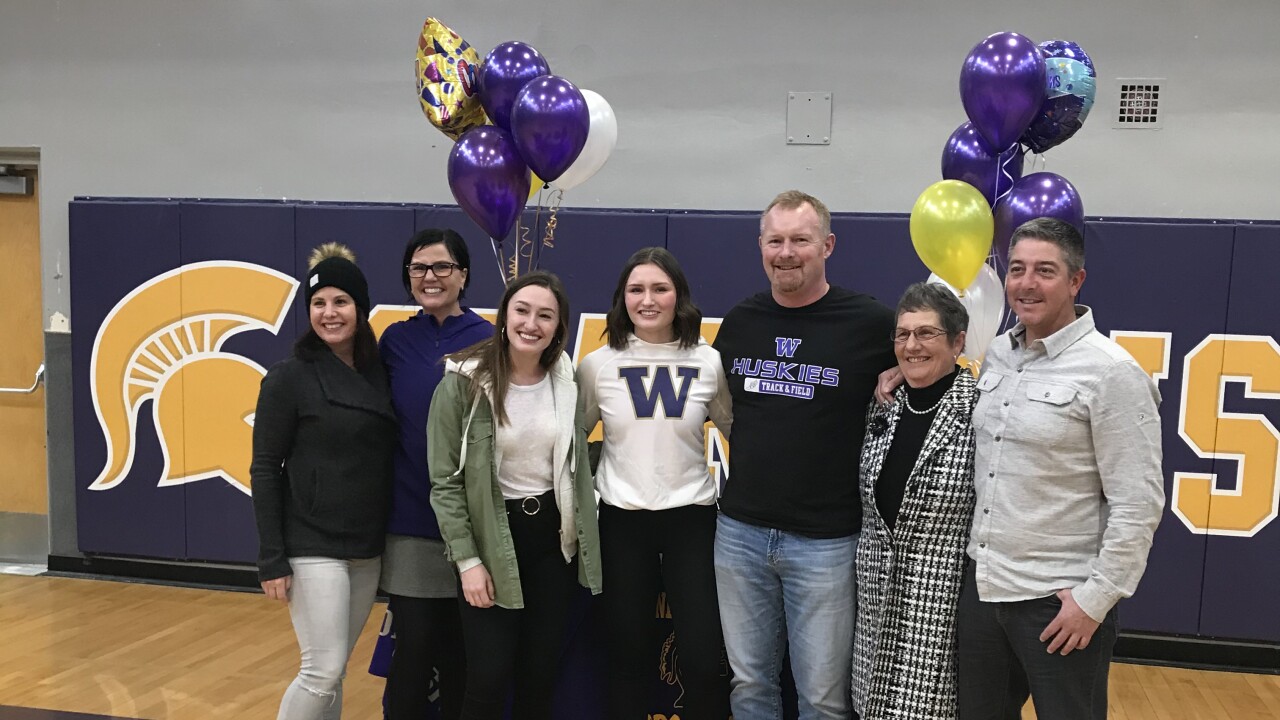 MISSOULA -- One of the best jumpers in Montana high school track and field history has officially made her college decision.

Lauren Heggen is going to be a Washington Husky.

Heggen, a senior at Missoula Sentinel High School, officially signed her letter of intent on Tuesday to join Washington's track and field team.

"I'm absolutely ecstatic," Heggen told MTN Sports last week about her decision. "This process has been pretty fun and extensive and a great time going on all of these visits and stuff, but I'm really happy with my decision and super stoked to get back to work and go compete in indoor and then go out there and have a good college career.

"When I committed verbally with the coach the other day, I got off the phone and I was ecstatic and super excited. But I went downstairs and told my parents I just committed and it was kind of surreal. It didn't really sink in until the next day or two. It's been an amazing process, and I've had so many people support me throughout it and I'm endlessly grateful to all of those people. It's been a crazy road and I'm excited to start this new chapter."

For Heggen, Washington's coaching staff stood out to her the most, but she really liked the team and the facilities as well. A big fan of the Pacific Northwest, Heggen said she was drawn to Seattle's appeal but liked its proximity and similarities to home as well.

Heggen visited Washington on the first weekend of November and from there she was sold. After thinking it over more, she decided to give her commitment to the team and school. She will be on scholarship with the team.

Heggen chose Washington over Stanford and Notre Dame. Those three schools were her final three, but the standout drew interest from many other schools, including Michigan State, Minnesota, Texas A&M and North Carolina, as well as Montana and Montana State.

Two weeks prior to visiting Washington, Heggen visited Notre Dame and she traveled to Stanford the week after. But in the end she chose Washington. Heggen enjoyed the process but said it could be a lot to handle at times since it was such a big decision.

"I think I credit a lot of that to my parents. They have been pivotal in this whole process for me," Heggen said. "My parents both have been equally involved in this process and I honestly would not be here without them and the endless support they have given me.

"(The most) eye-opening part of this was going and experiencing all of the different campuses and getting to know how to deal with college coaches on the phone and being able to formulate emails and talk professionally with these coaches. It's intimidating early on, but once you start doing it a little bit you get a little more comfortable and confident. You're basically involved in a business deal as a 17-year-old and it's one that is so pivotal that it will determine your future."

Heggen said she never had a deadline that she wanted to have a commitment by because she didn't want to rush the decision. But after the visits, she felt confident in picking the Huskies, and, with it, a weight was off of her shoulders. Along with the jumps, Heggen was also recruited by Washington to be a heptathlete.

The past two seasons at Sentinel, Heggen has been rewriting the record books for the Spartans. As a sophomore in 2018, she and teammate Ashley McElmurry (who now competes at the University of Nebraska) went head-to-head in a record-breaking contest that saw Heggen earn gold with a jump of 39 feet, 7 inches to set a new all-class mark in the triple jump. Then, back in May, Heggen bested herself with a leap of 39-09.25 to reset the record again at the state meet.

On May 3 at the Butte Invitational, Heggen recorded a jump of 40-07.50, which according to the Montana High School Association, is the longest official girls triple jump ever recorded in the state.

Heggen also won the 100-meter hurdles as a sophomore at state.

"Lauren has been a model student-athlete here at Sentinel, and her signing with the University of Washington is just another example of her constant hard work paying off," Sentinel jumps coach Khalin Anderson said. "She has not only been a champion in track and field but also a champion in the classroom and in the community. Lauren is one of the hardest-working individuals I have ever been around and we are all just extremely proud of her for reaching this goal.

"I'm just excited to coach her one last time this spring as a Spartan, then send her off to a quality institution such as UW to watch her grow and flourish even more at the next level."

Up next for Heggen is the indoor season before she embarks on her final spring of high school track and field. Heggen has been working with Mike Ramos since July as she readies for the season. Together, along with working with Doug Lefler for her lifting, Heggen and Ramos have been focusing on her nutrition, workouts and everything that goes into her training. Along with her jumps, Heggen will also be running the 300 hurdles for Sentinel as well.