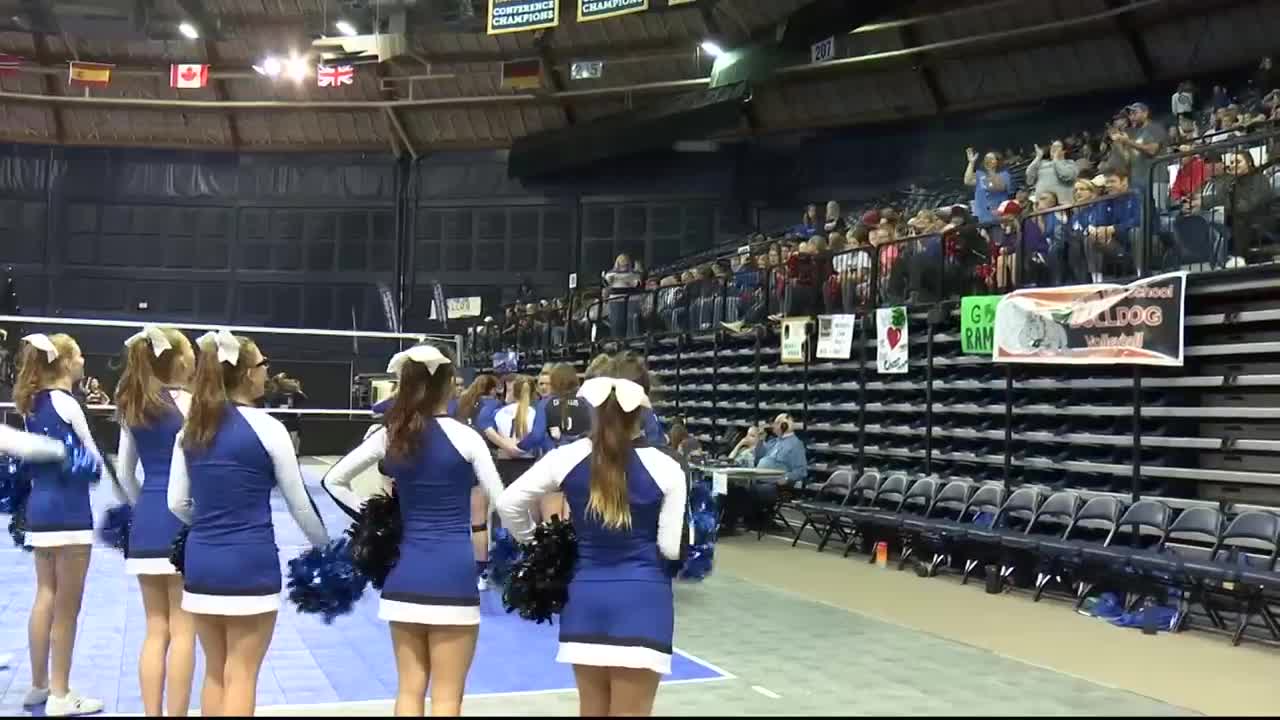 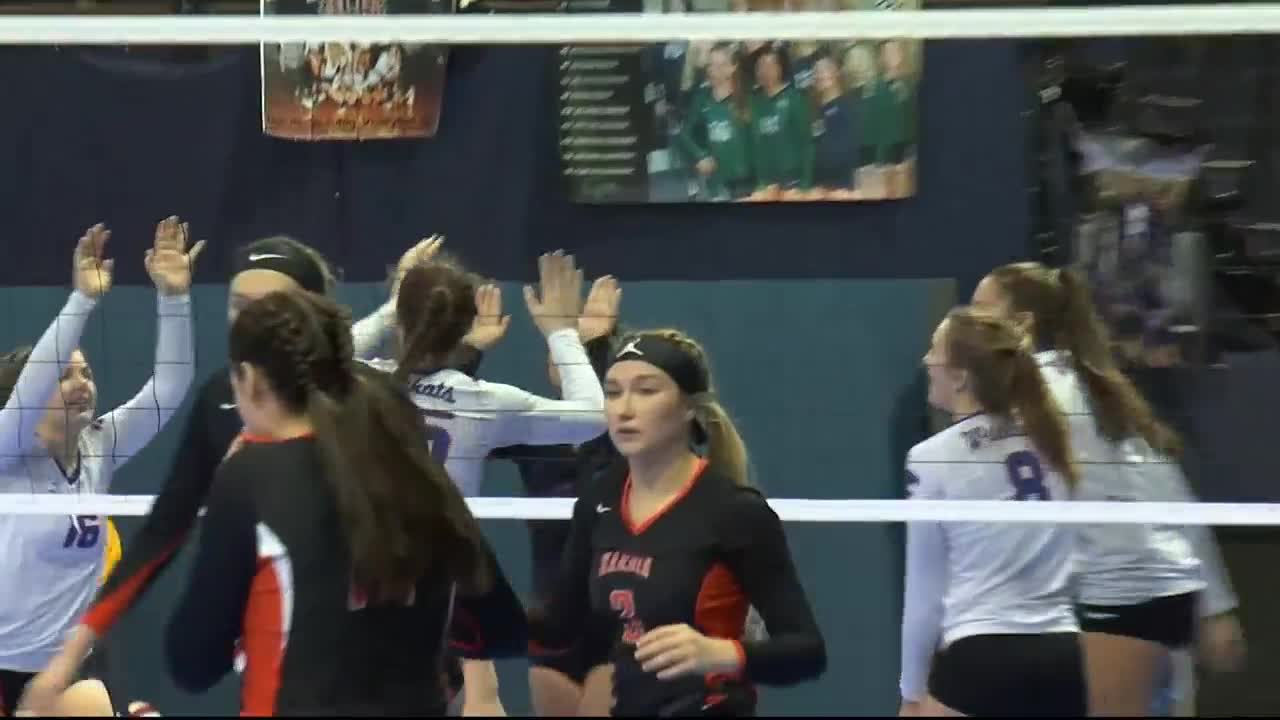 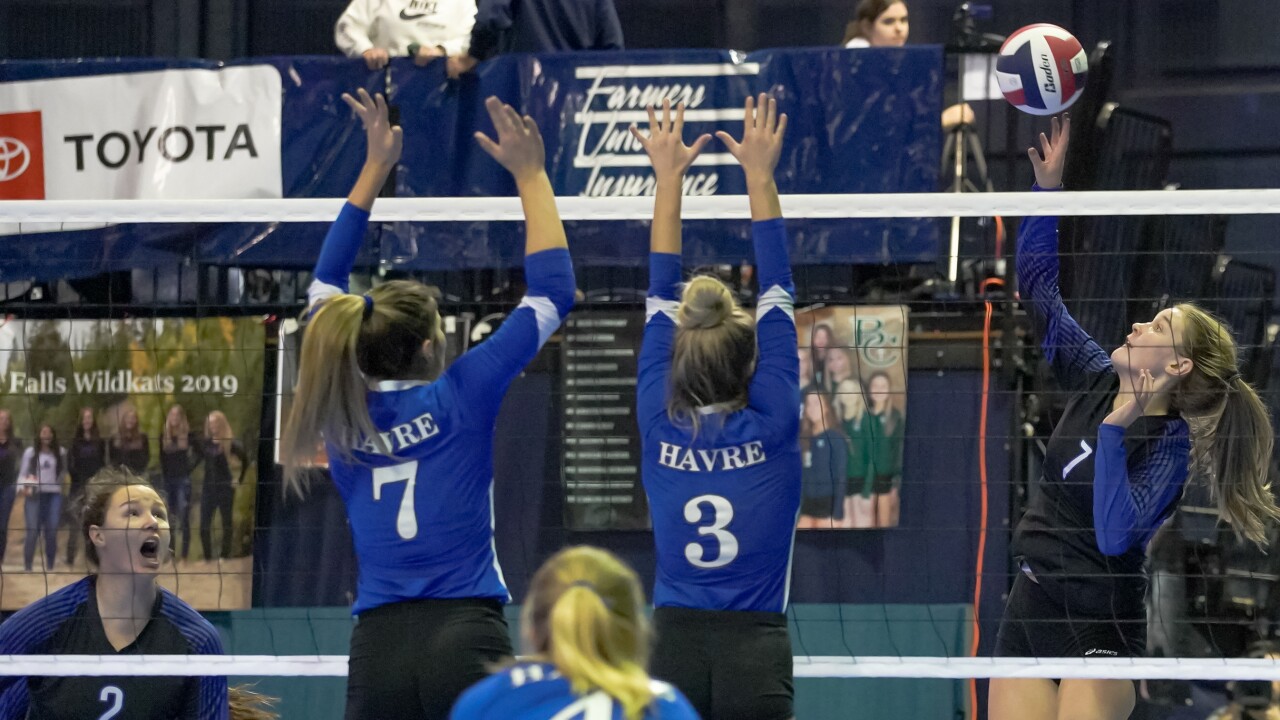 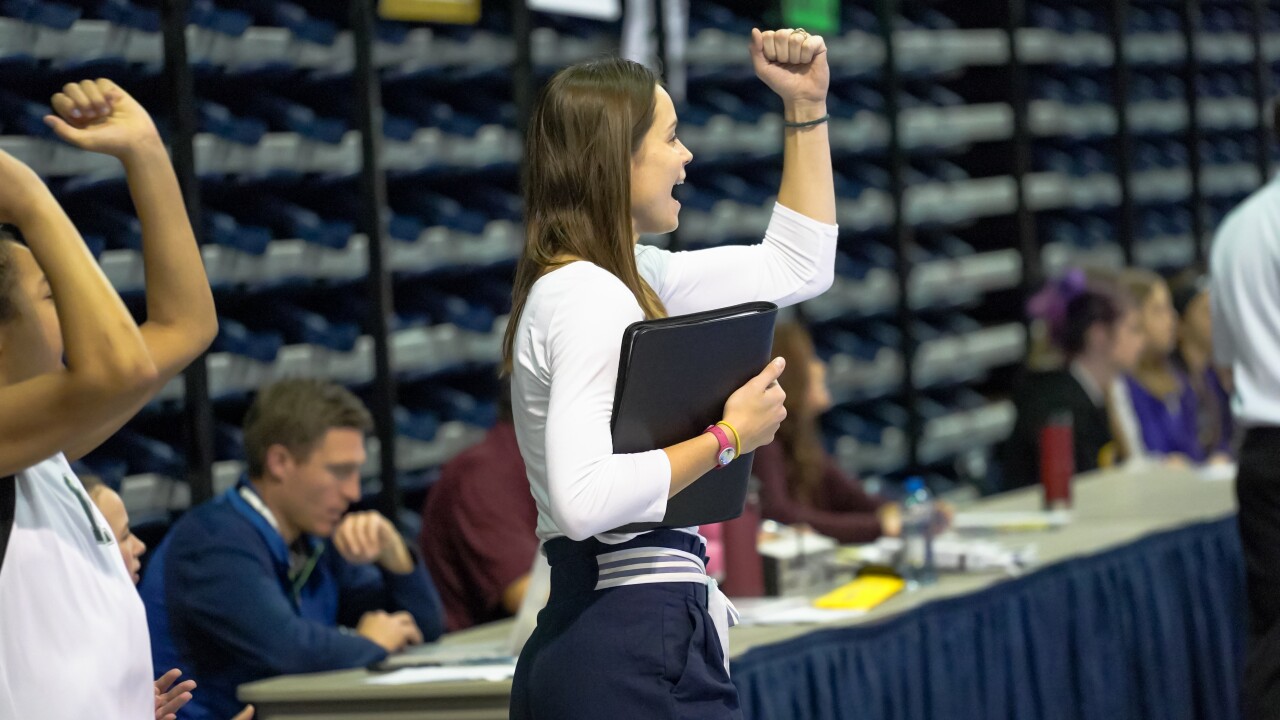 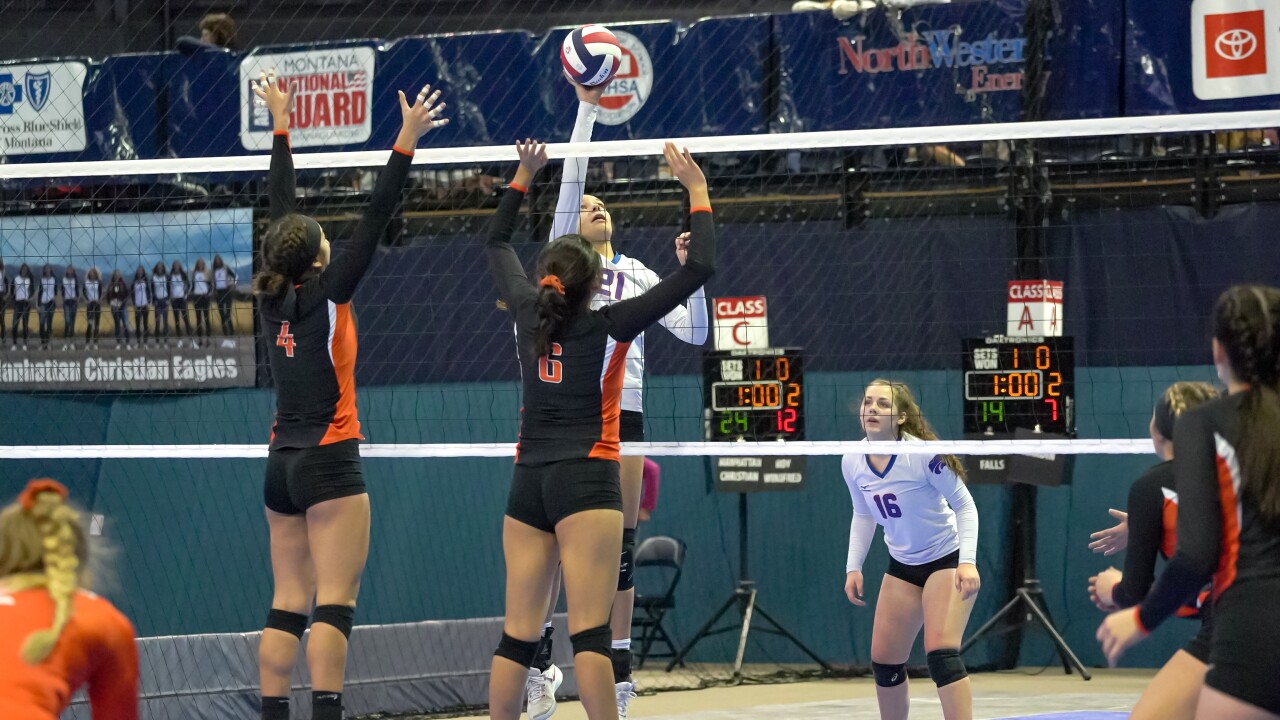 (Editor's note: Watch video highlights from Day 1 by scrolling through the videos above)

BOZEMAN -- Madeline Gilder and Briar Welling celebrated birthdays on Thursday evening, but no gift was better than the Corvallis duo's celebration with teammates on the court at Brick Breeden Fieldhouse. Gilder, Welling and Corvallis defeated Glendive in four sets of the Class A state volleyball quarterfinals, winning 25-20, 21-25, 25-18, 25-14.

Gilder had a match-high 18 kills to go with 12 digs, Hannah Martin dished out 33 assists and Isabel Evans had five blocks for the Blue Devils, who won last weekend's Western A divisional to qualify for the state tournament.

Meadow Torres and Karsen Murphy each had 12 kills, but the Red Devils fall to loser-out action on Friday at 2 p.m. against either Polson or Hardin.

Corvallis will get a crack at two-time defending champion Billings Central Friday at 6 p.m.

Billings Central is playing arguably its best volleyball of the season, according to hitter Olivia Moten-Schell. The Rams showed that Thursday night in the quarterfinal round of the Class A state volleyball tournament, breezing past Columbia Falls in four sets -- 25-22, 25-21, 12-25, 25-15.

Moten-Schell had a match-high 14 kills, while teammate Cindy Gray added 12, but the story of the match was Central's defense. The Rams had 79 digs, including 14 each from Kristina Schafer and Maria Stewart, while Grace Zeier and Izzy Erickson posted 13 apiece. Erickson had a pair of blocks against a hard-hitting Wildkats club that swept Hardin in the opening round.

Mady Hoerner had 13 kills for Columbia Falls, while Dillen Hoerner added 11, but there was no easy offense against the Rams on Thursday night. The Wildkats, who saw Kamber Brown record 42 assists in the loss, play a loser-out match Friday at 4 p.m. against either Butte Central or Havre, who meet at noon Friday.

Billings Central, which has won the past two State A titles, will face either Glendive or Corvallis Friday at 6 p.m.

Corvallis hitters combined for 54 kills while giving up only 18 as the Blue Devils defeated Havre in four sets at the Class A state volleyball tournament on Thursday. Corvallis won by scores of 25-17, 25-20, 25-27, 25-21.

Madeline Gilder had 15 kills, while Hannah Hutchinson and Isabel Evans each added 12, and Hannah Martin doled out 43 assists for Corvallis. Evans, one of the classification's hardest hitters, added a pair of blocks, Martin recorded 18 digs and Gilder had three aces in the win.

Jessa Chvilicek had 10 kills, 2.5 blocks and an ace for Havre, which falls to a Friday loser-out contest against Butte Central. Corvallis and Glendive square off Thursday evening in a quarterfinal, with the winner advancing to the Class A undefeated semifinals on Friday evening.

Meadow Torres had arguably the game of the day Thursday, helping Glendive past Butte Central in straight sets at the Class A state volleyball tournament on Thursday. The Red Devils won 25-16, 25-15, 25-20.

Torres, a 5-foot-10 senior, had 20 kills, 16 digs and two aces in the win, arguably the most impressive stats of any individual in any classification on Thursday. Torres was joined by Brittany Kaufman (8) and Karsen Murphy (8) in leading Glendive to 41 total team kills. Murphy had 26 assists, two blocks and two aces in the win.

Butte Central saw Cassidy Strizic record seven kills and three aces, but the Maroons tallied only 16 kills and 16 assists in the match. Maci Reopelle had nine assists and 17 digs for Butte Central.

Dillen Hoerner led a balanced Columbia Falls attack as the Wildkats defeated Hardin in straight sets -- 25-21, 25-10, 25-17 -- in the second match of the Class A state volleyball tournament on Thursday.

Hoerner had 11 kills, tied for the team-best with Mady Hoerner, while the duo also added a pair of aces each in the win. Sophomore Kamber Brown had 37 of the Wildkats' 40 assists, helping Columbia Falls to an impressive 42 team kills in the match. Angellica Street (13) and Dillen Hoerner (12) totaled 25 digs for the Wildkats, who next face Billings Central in Thursday's 6 p.m. quarterfinal.

Hardin, which will meet Polson in loser-out Friday morning, was led by Alyssa Pretty Weasel's 10 kills and Natalie Edgar's 18 assists. The Bulldogs also got 16 digs from Rilee Green.

Two-time defending Class A volleyball state champion Billings Central made quick work of Polson to open the 2019 Class A state tournament at Brick Breeden Fieldhouse in Bozeman on Thursday morning. The Rams defeated the Pirates 25-13, 25-19, 25-15 in the first match of the day.

Olivia Moten-Schell had a match-high 17 kills, while teammate Cindy Gray chipped in with 11. Maria Stewart and Christina Schafer combined for 37 assists, 17 digs and five aces in the win. Central's defense challenged Polson at the net, with Izzy Erikson recording three blocks. Gray added two in the win.

Polson was led by Maggie Todd's 12 kills and Lena Pawlowski's 14 assists in the loss, as the Pirates prepare Hardin in a loser-out contest on Friday morning. Central awaits Columbia Falls in a 6 p.m. match Thursday evening, with the winner of that advancing to the undefeated semifinal.