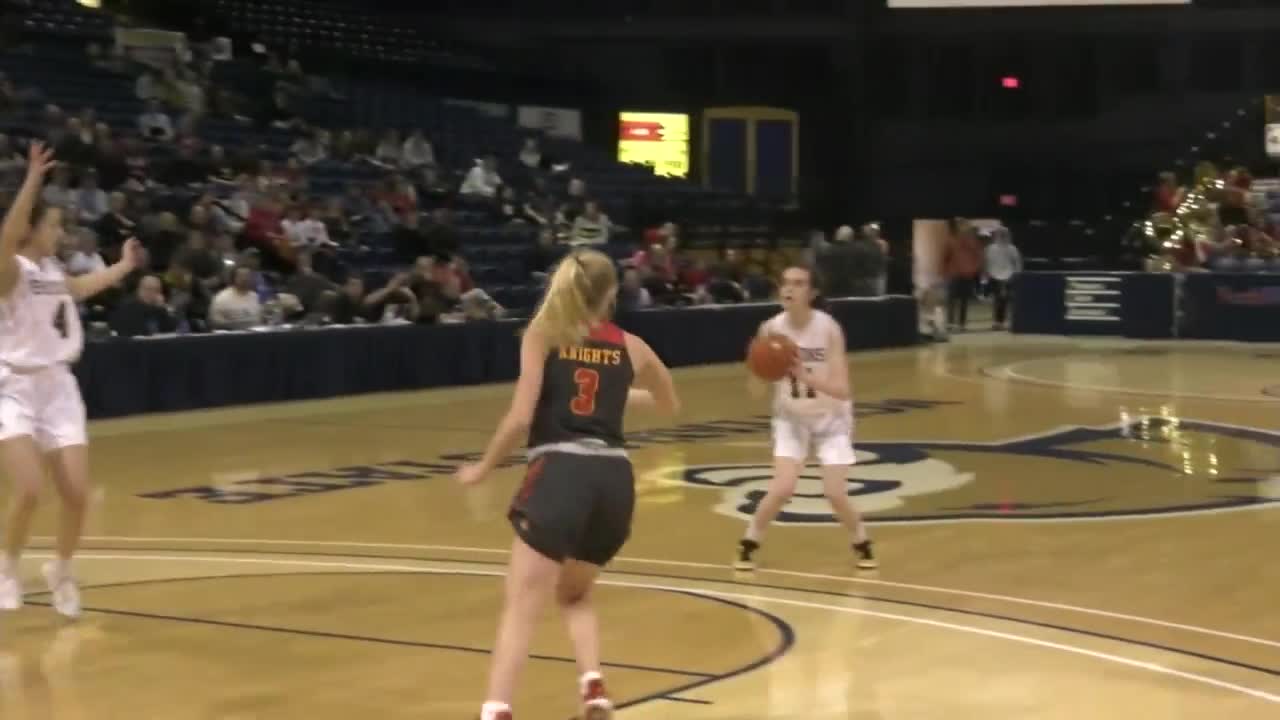 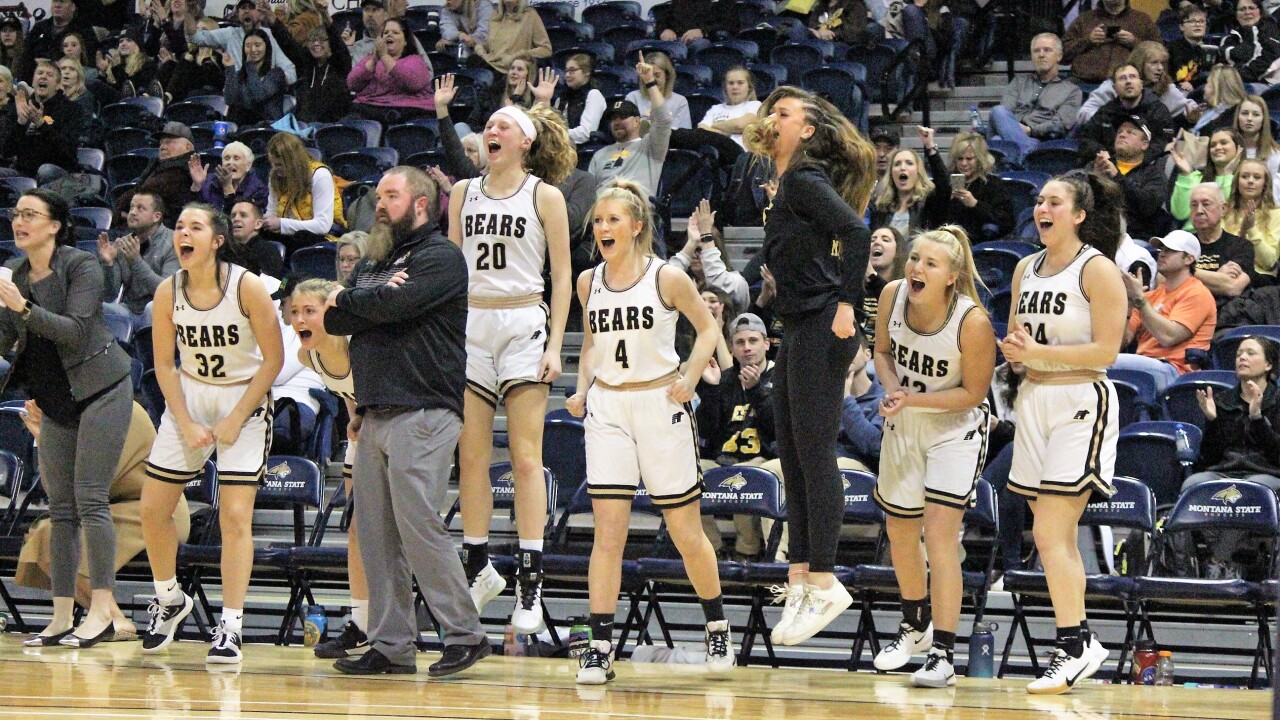 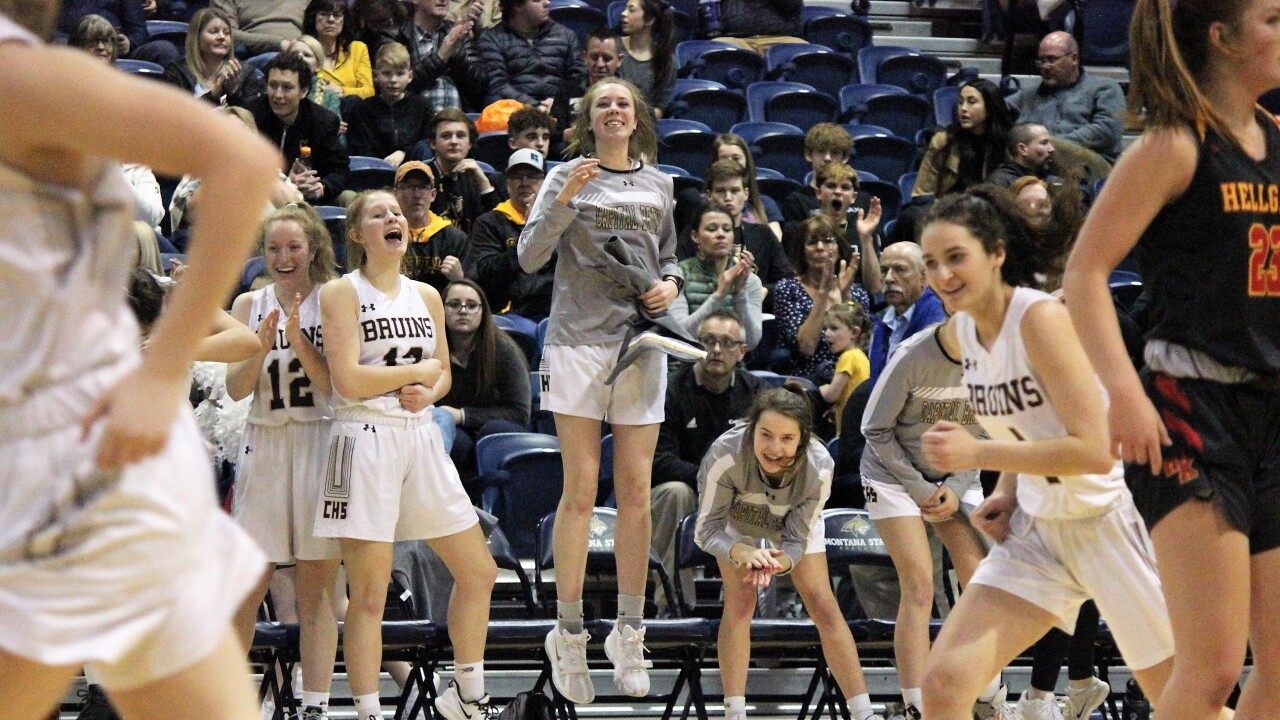 BOZEMAN -- Following the completion of the girls semifinals game, the State AA tournament was cancelled due to coronavirus concerns in Montana. But instead of playing for a title on Saturday, The Billings West Bears and Helena Capital Bruins were named co-champions by virtue of their semifinal wins.

"We're disappointed in the fact that we had a basketball game everyone wanted to see," said West head coach Charlie Johnson. "We're not going to get a chance to play that game. It doesn't take away from both teams that worked so hard to get to the point we were in. We're co-state champs. There's some tears right now, but hopefully in a week they'll look back and realize their hard work paid off."

When Paige and Dani Bartsch are on their game, the Helena Capital duo are impossible to stop. That was the case Friday night as the Bruins twin towers led Capital to a 48-36 State AA semifinal win over Missoula Hellgate – punching their ticket to Saturday’s final.

“From the beginning we had the people to do it, and we have the confidence,” said Dani Bartsch. “We play together amazing and we have the team chemistry. We’re a one of a kind team.”

“It’s fun to watch,” Dani said. “When (Paige) blocks someone out on the three-point line, it gets the whole team hyped. I love watching it.”

The Capital show wasn’t without some bumps in the road in the first half. After jumping out to a 12-4 lead after the first quarter, the Bruins only managed one point in the second quarter for a 13-10 halftime lead.

They responded with a 14-point run in the third quarter to push the lead to 16 – never letting the lead slip below double figures for the rest of the game.

“I thought we got away from attacking in the second quarter,” Bruin head coach Katie Garcin-Forba said. “But I thought in the third we did a great job of getting into gaps. We had skip passes to shots, and worked the interior a little bit. That’s what makes us hard to guard, that’s what makes us tricky.”

Mashayla O’Malley added nine points in the game. Hellgate was led by Bailee Sayler with 19 points. Behind the Bartsch twins, Capital outrebounded the Knights 30-18.

Capital makes a trip to the AA championship for the first time since they won the school’s first state title in 2015.

“It means everything. They know how hard it is to get to this point, we learned that last year,” Garcin-Forba said. “Hellgate is the only team that has given us a loss this year. So for them to get a little bit of revenge on that and able to feel what this feels like going into Saturday night, it’s a very good feeling.”

The Bruins are also chasing history of the different sort. Not many teams have won a Class AA volleyball title and basketball title in the same year. Capital could add their name to that short list.

“Only like three teams have ever done it before,” Bartsch said. “It would be amazing to be a part of something so great.”

It’s not how you start, it’s how you finish.

And the Billings West girls basketball team finished strong Friday in a 48-30 Class AA semifinal win over Missoula Sentinel.
After managing just 13 first half point, and only two in the second quarter – the Bears outscored Sentinel 35-16 in the second half to book a return trip to the Class AA championship in Saturday night.

“You know the first half, we had the same looks we did in the second half they just didn’t fall,” West head coach Charlie Johnson said. “My challenge to them was just make plays, step up. Sentinel is long, lanky and they run the floor well. But we settled in and made plays.”

“We started playing a lot better defense in the second half,” Willa said. “And when we play defense we get out and run and it leads to easy transition points”

West jumped out to a 11-4 lead after the first quarter and looked to continue the dominant play they exhibited in the first round against Kalispell Glacier. But the Bears went ice cold in the second quarter and lost the lead entering the locker room down 14-13.

But Johnson’s team took control in the third quarter and blew the game open in the fourth, building a 20 point in the final frame. Lexi Deden and Brooke Stayner led the Spartans with nine points apiece, but Sentinel turned the ball over 17 times against just eight assists.

The win sends West to the Class AA championship for the second year in a row. In 2019, the Bears lost to Helena High and now face another Capital city team in the Bruins.

Helena Capital defeated West 43-42 in their second non-conference game of the season, but Johnson knows a lot has changed since December.

We had a battle in Helena back but they’re a different team, so are we,” he said. “I expect it to be a good game. Back and forth. I told the girls it will come down to whoever can make the plays. If we can do that, I like our chances. Capital will get their fair share, so we have to limit those.”

And it helps the Bears to have the sting of losing in the title game last year in the back of their minds. They hope they can finish the tournament strong, just like they finished Friday's game.

“Losing last year made us want to come back this year even stronger,” Albrecht said. “Last year playing in the title game gave us valuable experience.”