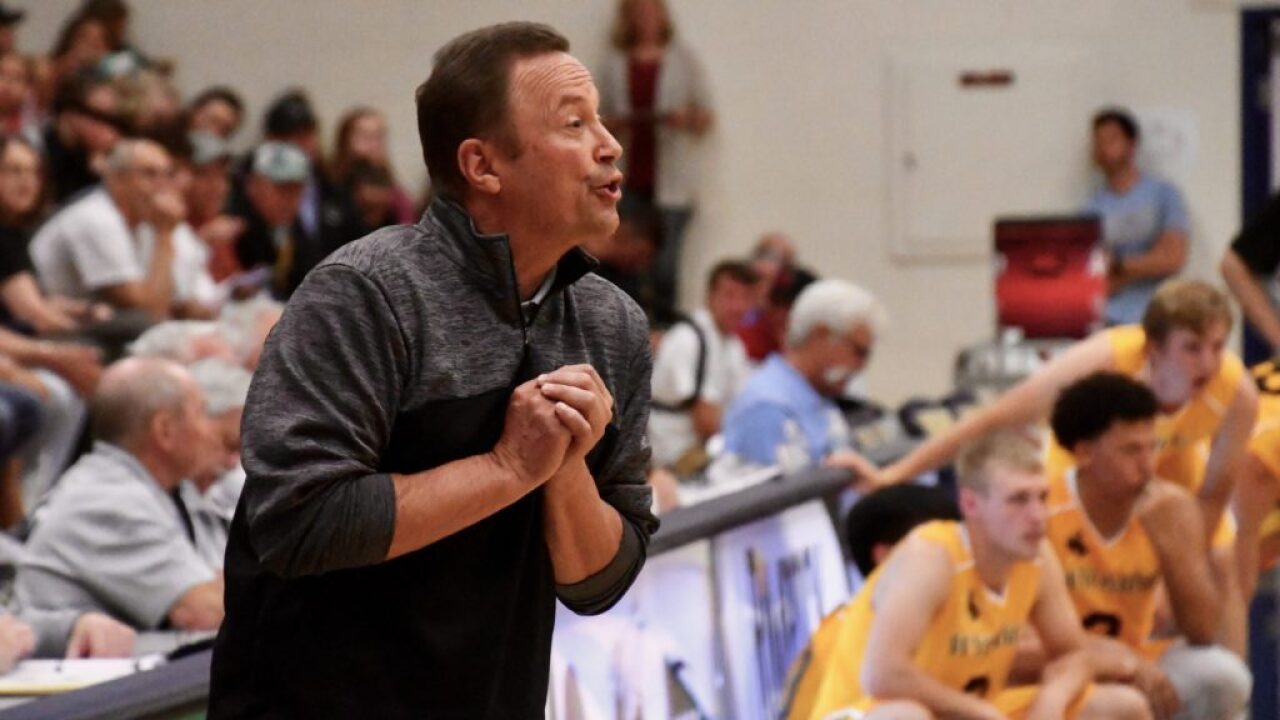 SLIM KIMMEL/MTN Sports
Montana coach Steve Keller motions to his team during their game against Wyoming Friday at Alterowitz Gymnasium.

GREAT FALLS — Steve Keller might have always hit the golf course with his good friend Mike Sauvageau this weekend in Three Forks.

But from there the duo was supposed to head to Billings to start practices for the annual Montana-Wyoming all-star basketball series in which Keller has been the head coach for the Montana boys team since 2012 and Sauvageau has been an assistant on Keller’s staff. Those games were scheduled for June 12 and 13, and Keller would have been going for his 17th and 18th wins in the series with a roster headlined by two-time Gatorade player of the year and Utah State commit Rollie Worster.

“It’s kind of a big deal that that got canceled,” said Keller, who has been the men’s basketball coach at the University of Providence since 2018 after 11 seasons at Montana Western. “I really feel for the players … but every all-star game got canceled, so everybody’s in the same situation.”

The Midland Roundtable has organized the Montana-Wyoming series every year since 1976 for the boys. The girls have played every year since joining in 1997. But the coronavirus pandemic wiped out this year’s games along with every other all-star game scheduled for the summer, including the Class B, 8-Man and 6-Man football games, the Knights of Columbus Badlands Bowl, the Montana East-West Shrine Game and the Shodair Soccer Classic.

The all-star games annually recognize Montana’s top outgoing senior athletes, giving them final opportunities to play high school sports. For many of them, the all-star games serve as the final competitive games of their careers.

All the games bring different points of pride, but only two pit Montana against other states. This year’s game was set to be the final in the Badlands Bowl series with North Dakota, while Montana and Wyoming seem destined to renew their rivalry next summer.

“I want (the Montana all-stars) to have fun, but I also say, ‘What’s fun? Winning’s fun. You going to remember that you won both games, or are you going to remember that you broke the streak?’ They get reminded of that,” said Keller, who has coached the Montana boys to 16 consecutive wins in the series. “I just feel like any game I coach I should coach as hard as I can and be as intense as I can, (but) I am a little bit more mellow in the all-star game.”

Keller started his run in the series in 2012, claiming his first two wins with players like Riley King of Missoula Sentinel, Danny Robison of Billings West and Shyke Smalls of Great Falls High. King and Smalls both ultimately played for Keller at UM Western.

One of the highlights from the series came a few years later for Keller, though. In 2015, Montana featured a talented roster loaded with eventual NCAA Division I players Tres Tinkle (Oregon State), Jared Samuelson (Montana) and Kendal Manuel (Oregon State/Montana). Montana cruised to a 114-86 win in Sheridan, Wyo., and then settled for a 92-85 win back at Rocky Mountain College in Billings the next night.

“When I had Tres Tinkle and Jared Samuelson on the team, and Wayne Tinkle (Tres’ dad, who is now the coach at Oregon State) and Shawn (Samuelson, Jared’s dad, who was one of the best players in Montana basketball history) were sitting right behind my bench at Rocky, I felt a little pressure there having those two hovering over me,” Keller laughed. “But that was a fun bunch there, too, and had a hard time winning those games, and we had really good players.”

Keller almost begrudgingly accepts his 16-0 record in the series, and it’s been threatened a few times, including in both games in 2019. Montana won the game in Billings 103-100 last year and then pulled out a 95-94 win in Wyoming.

“It was great games last year,” Keller said. “We know that when we play them they’re going to play so hard, and we talk to our kids about, ‘You don’t want to be the first team to break the streak.’ And then the Wyoming kids are all talking, ‘We’ve got to break the streak,’ so they’re playing harder. It’s a fun atmosphere. It’s great for the kids.”

“I just love that game,” Keller added. “I’m passionate about basketball, and I love coaching it. When you get to get coach the 10 best players in the state, I feel like that’s kind of a fun deal. Like I said, it’s an honor for me, as well as for those guys.”