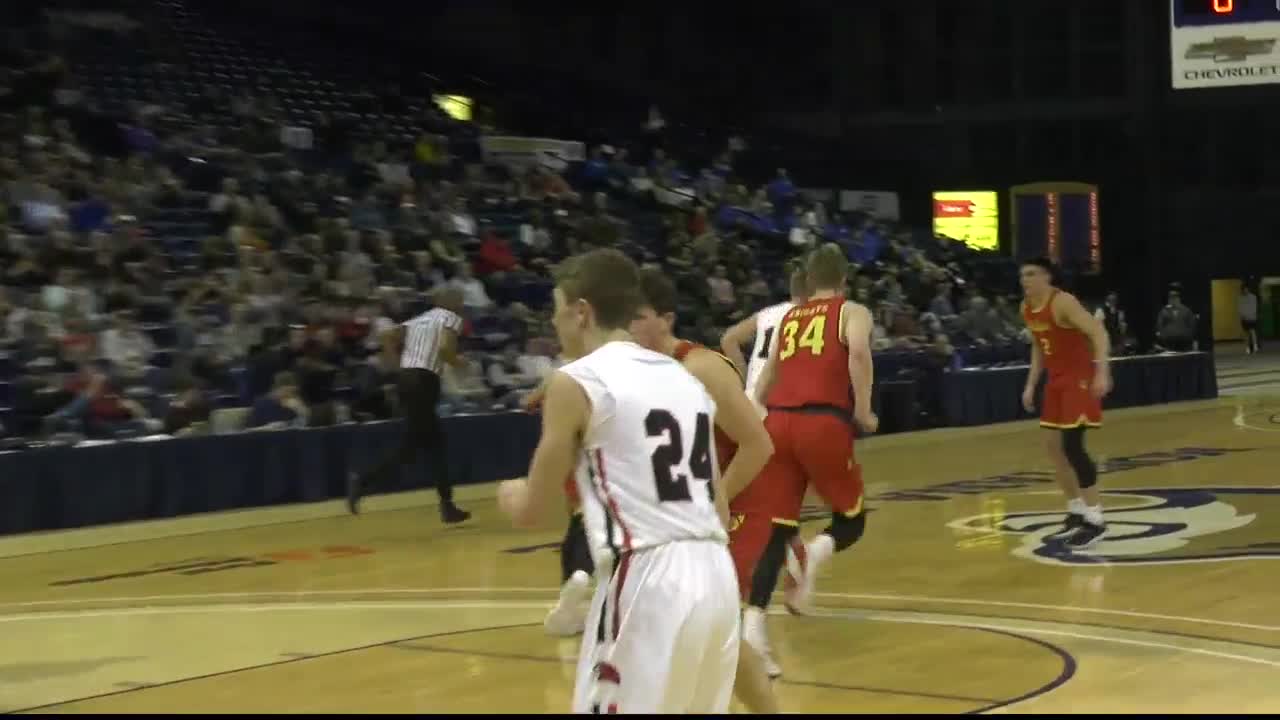 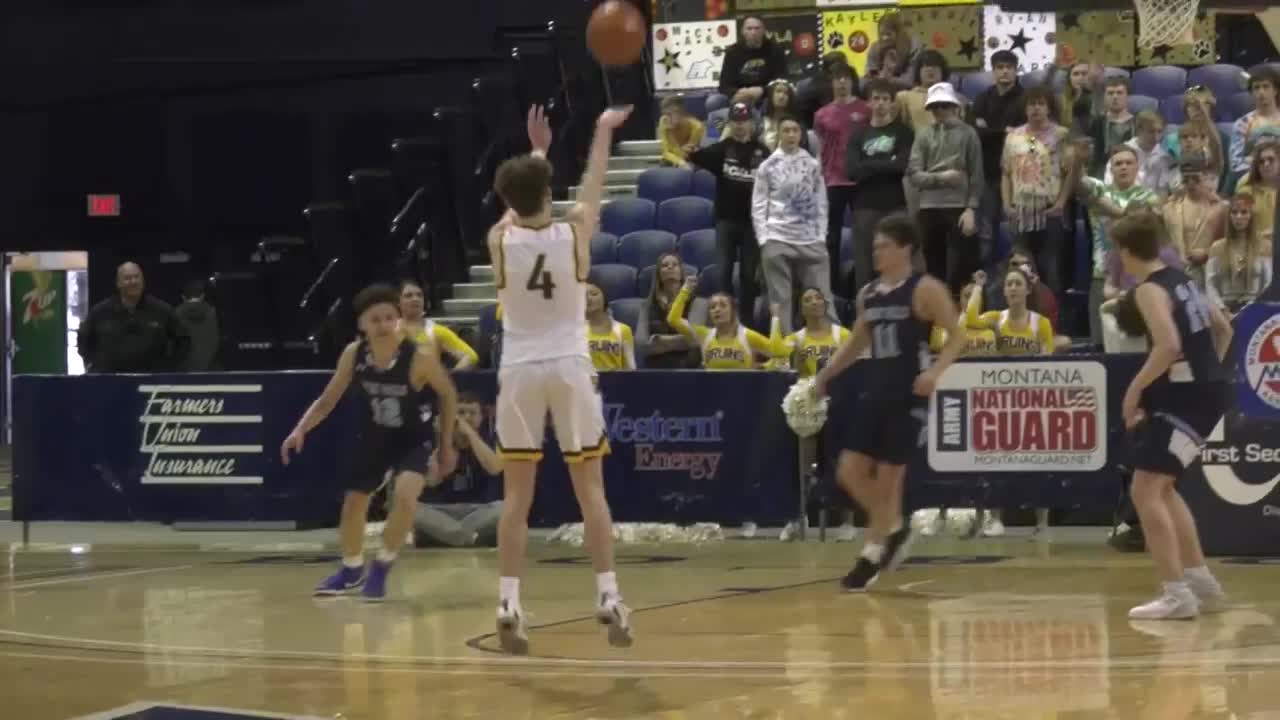 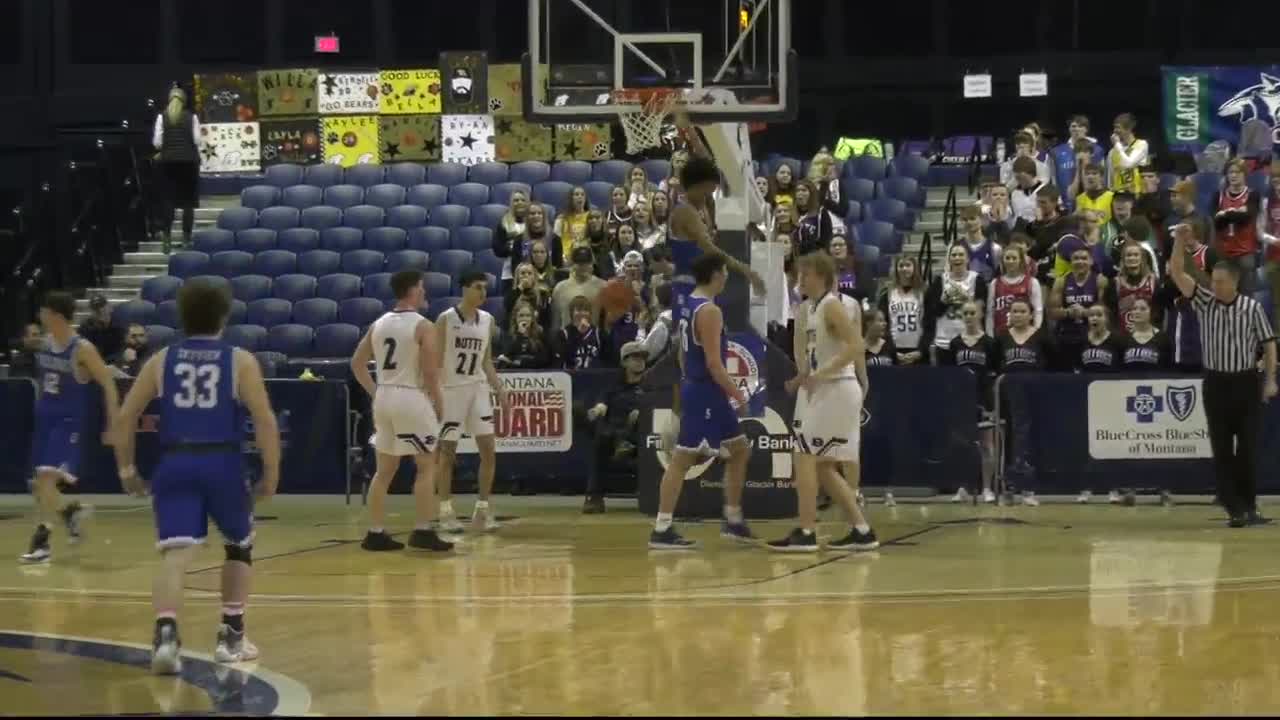 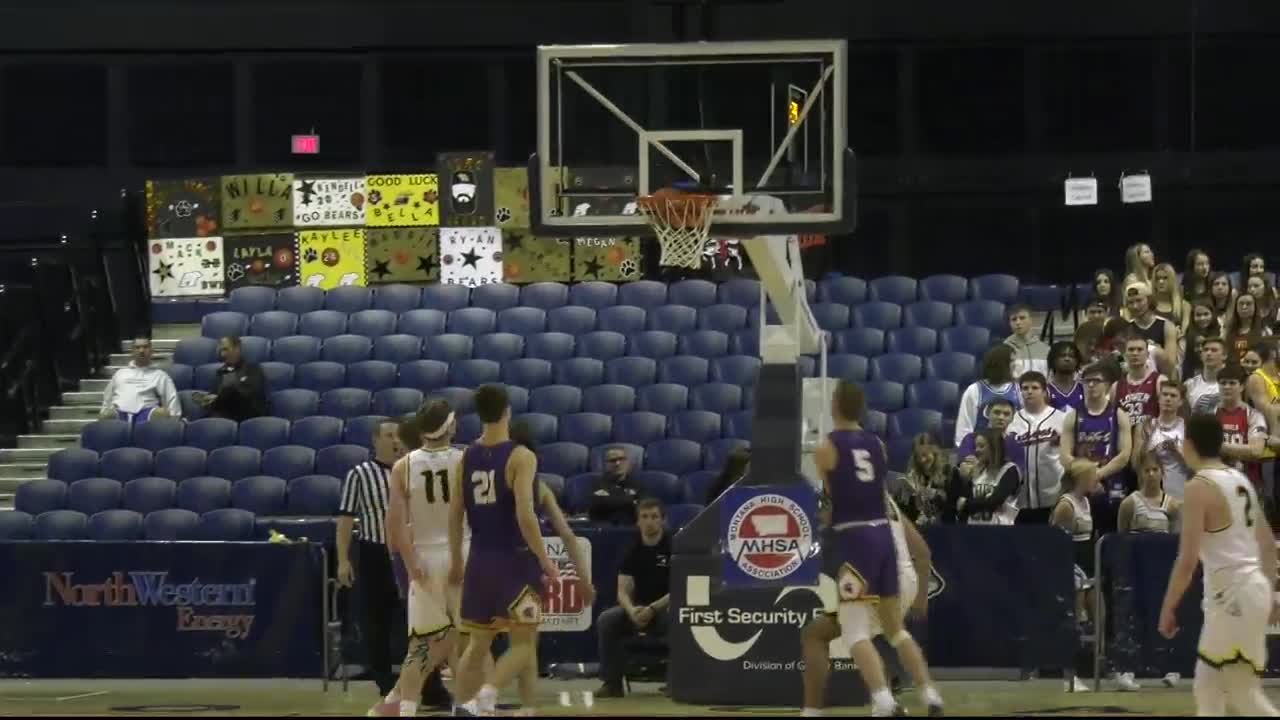 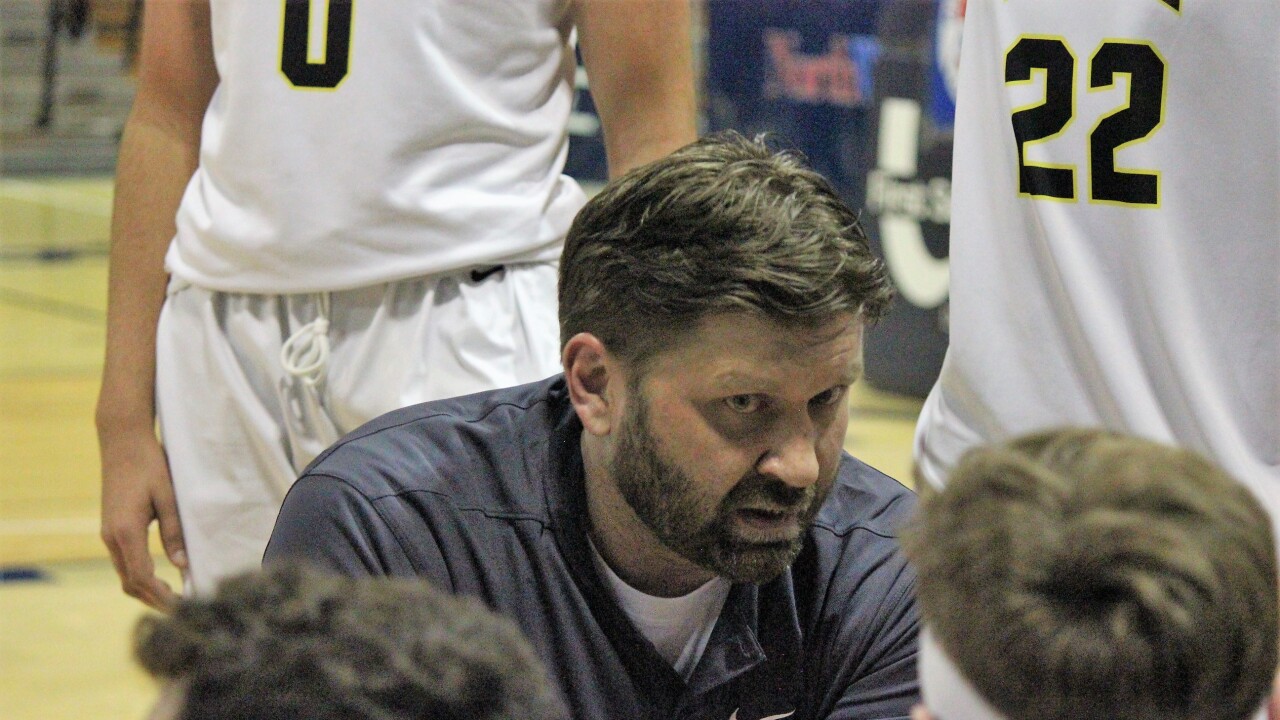 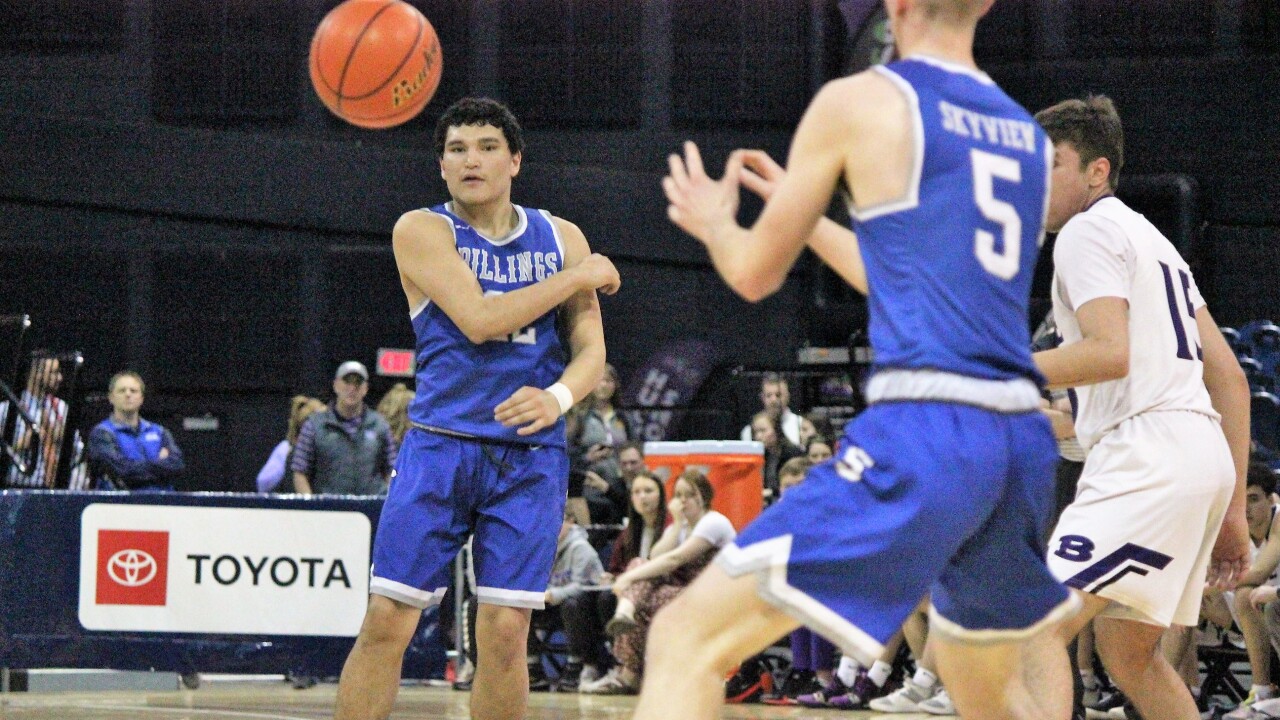 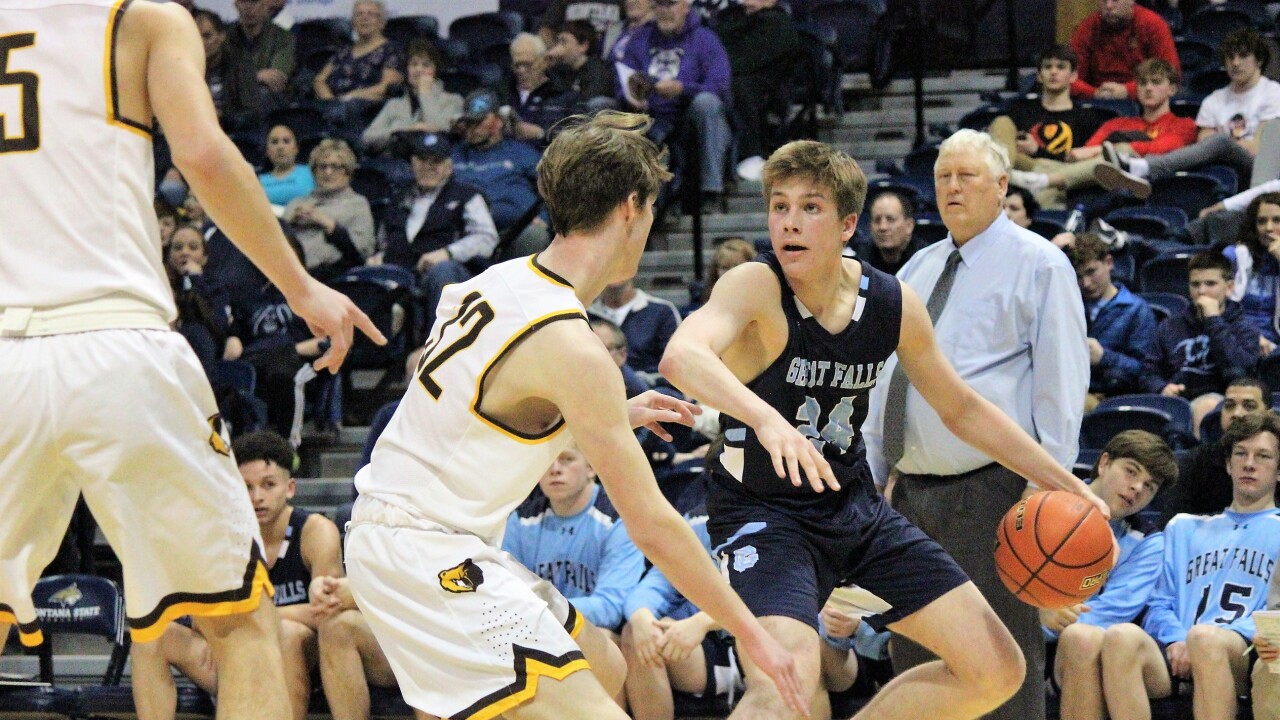 BOZEMAN – Drew Wyman needed to ice his knees after the game.

“That one felt long,” he joked.

And you couldn’t blame him.

The junior forward scored 34 points in a 74-72 overtime win over Helena Capital in the first round of the State AA tournament, including a pair of game-winning free throws in the final seconds to cap off a remarkable performance.

“You just got to stay cool, calm and collected,” he said. “All the time.”

The Bison were the picture of cool throughout the game. Great Falls High shot out to an 18-9 lead after the first quarter and pushed the lead to 14 points midway through the second quarter.

From there, they withstood every shot the Bruins had to offer. Capital bounced back in the third quarter, chipping away at the lead behind an incredible shooting day from Brayden Koch who had 30 points, hitting 8-of-9 from beyond the arc.

The Bruins cut the lead to two points in the third quarter before Wyman hit two threes for a 53-44 lead entering the fourth. But Capital owned the fourth, clawing back and forcing overtime on a late Koch three with under 10 seconds left.

Capital took their first lead of the game with 2:43 left in overtime, before the Levi Torgerson hit a three on the other end to take it back. The game was tied at 72 when Wyman was fouled on a drive with 11.2 seconds left.

He hit the first free throw then, after a timeout, hit the second. Capital looked confused on the other end and couldn’t get a shot off in the final seconds, sealing the win for the Bison.

“We were up all game, I don’t think they got a lead until overtime,” Wyman said. “So, we knew we had to finish it strong. “Our crowd came out strong and gave us some energy and that helped us a lot.”

“We pushed through the adversity,” Torgerson said. “We found Drew when we needed to. “I might be biased, but I think he’s the best player in the state, in Montana by far. He’s getting doubled every game and he’s still scoring at will. When he kicks it out, we’re hitting out shots and our team is rolling right now.”

Parker Johnston, Shane Haller and Trevor Swanson joined Koch in double figures for the Bruins with 14, 12 and 10 points respectively.

Great Falls High will advance to play the winner of Billings Skyview and Butte in the AA semifinals, Friday at 6:30 p.m.

“Have to rest up and get some water,” Wyman laughed. “Clear your mind and hopefully we can come out and win that one.”

“I told them in the locker room that the the biggest thing is we had to come out and fight better,” Morales said. “That was the whole key is just energy, I felt like we were kind of flat.”

“I was just proud of how resilient our kids were, they stuck with it and didn’t panic when they had the No. 4 seed leading them at times,” Morales said. “Our kids just settled in and stayed consistent throughout the second half. We upped our rebounding and stayed attacking to get to the line.”

Message received. The Falcons rode a consistent second half performance to a 53-41 win over Butte in the first round of the State AA tournament. The Falcons attacked the basket relentlessly, and got to the free throw line 24 times, connecting on 17 attempts.

“We’ve been pretty even throughout the season, spreading the scoring around,” Morales said. “We go pretty deep to our bench sometimes, we’ll play 10 guys. That balanced scoring is important to us, because everyone feels involved and everyone feels a part of the victory.”

“That No. 1 versus No. 4 matchup is never easy, Butte High we knew they were going to fight that that’s just the type of kids they are,” Morales said. “Matt Luedtke is a new coach and he’s bringing a new energy there to that program. So, we knew we were in for a battle. We knew if they hit shots, they were going to keep it tight.”

Butte, meanwhile, snuck into the State AA tournament as the No. 4 seed and had upset on the mind. The Bulldogs led for over 18 minutes of the game, but couldn’t hold off Skyview in the second. Blake Drakos led Butte with 11 points.

Skyview now advances to play Great Falls High in the AA semifinals. The Falcons split the regular season series with the Bison, but topped them in the Eastern divisional semifinals. Morales watched Great Falls High top Helena Capital 74-72 in overtime before the Falcons took the court, and know another battle awaits them on Friday.

“Drew Wyman and Torgerson are quite the duo,” Morales said. “Scouts are all out the window in the state semifinals between us two. It’s going to come down to whoever wants it the most and who’s going to play the hardest.”

With less than a minute remaining in a game they’d led from wire-to-wire, Billings West senior guard Josh Erbacher watched Missoula Sentinel tied the game at 39 on a layup from TJ Rausch.

That’s when Erbacher did what he does best. After some crafty dribbling to work his way into the lane, he rose for a turnaround jumper and canned it to give Billings West the lead for good on the way to a 44-39 win to advance to the State AA semifinals.

“He absolutely kills people, he’s a matchup nightmare,” said West head coach Kelly Darragh. “The kid can score from anywhere on the court. He’s slippery and he makes a lot of shots down there.”

Erbacher finished with a team high 13 points, none bigger than those two with the game on the line in the fourth quarter.

“We all had big shots,” Erbacher said. “But I saw a moment to take a big shot and did it.”

And he did it in style. A good portion of the Billings West team was sporting postseason mustaches in Bozeman, and Darragh pointed out that Erbacher’s was in rare form tonight.

I don’t think guys really wanted to guard him because he has the creepiest mustache in the state,” Darragh said. “But whatever it is it worked.”

For his part Erbacher is proud of the stache and considers it a good luck charm.

The Bears dealt with the loss of star junior Neil Daily who went down in the third quarter with an ankle injury after scoring what was at that point a team high 10 points.

Alex Germer led the Spartans with 17 points, but was limited to just five points in the second half. TJ Rausch added nine points for Sentinel, with seven of them coming in the fourth quarter.

West now advances to face undefeated Missoula Hellgate in the semifinals, set for Friday at 8 p.m.

The Knights only led 9-6 after the first quarter but blew the game open in the second quarter scoring 20 points and holding the Hawks to five for a 29-11 lead at halftime.

The Knights pushed their lead to 30 in the fourth quarter and coasted the rest of the way. Missoula Hellgate will advance to face East No. 2-seed Billings West in the semifinals at 8 p.m.

Hellgate and West faced off earlier this season, with the Knights handing the Bears their only loss of the regular season 59-46 on December 14.