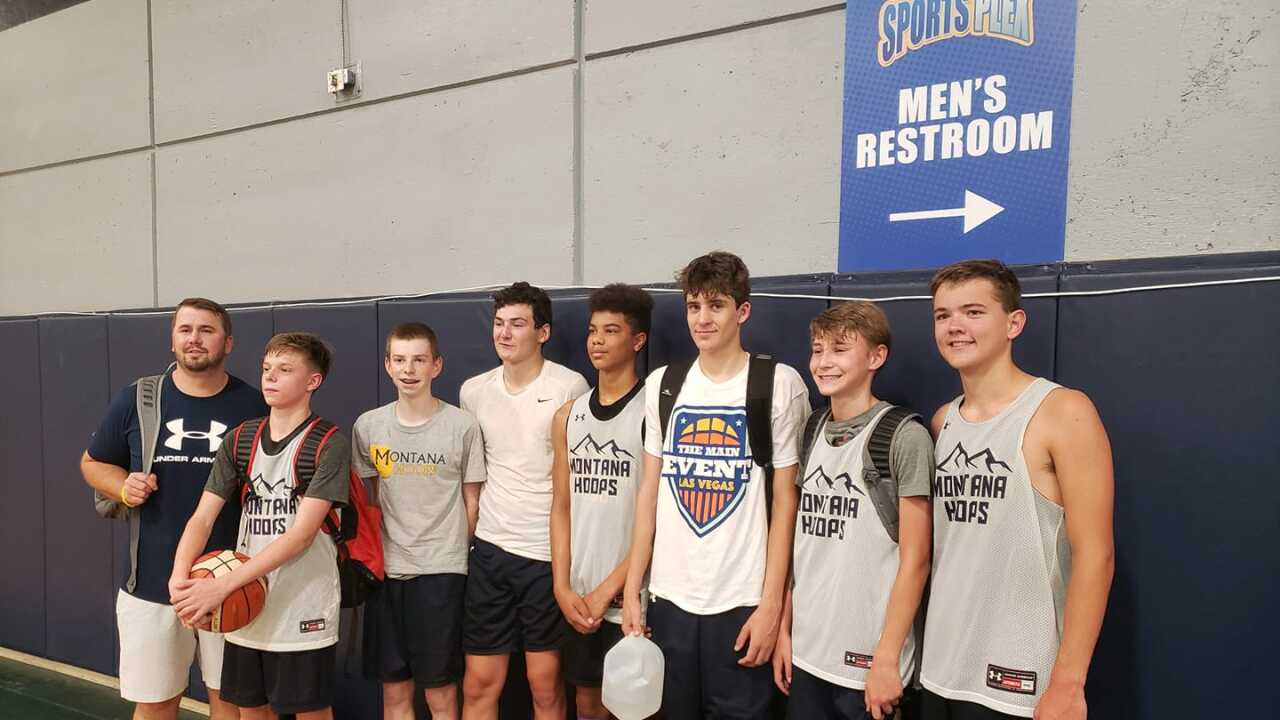 Montana Hoops team members pose for a photo during a tournament. (Courtesy Photo)

GREAT FALLS -- In just one year of existence, the Montana Hoops basketball organization has established itself as one of the marquee traveling teams in the state.

But entering the organization’s second year, providing opportunities for aspiring basketball players in Montana has come to a halt due to the COVID-19 pandemic.

“The spring has been taken completely off the board,” said program director JC Isakson. “NCAA live periods are shut down. By this point, we would have played a couple tournaments already out in Seattle, Washington even possibly down in Vegas. Those are off the table. We were looking forward to June and July, but there's just a lot of unknown.”

Isakson, who is also an assistant men’s basketball coach for the University of Providence, doesn’t look at Montana Hoops as an avenue for recruitment but as an opportunity for athletes who take their development seriously to face a different type and level of competition than they would just playing Montana high school or junior high teams.

“I think a lot of travel ball programs that's kind of their main sell is exposure, exposure, exposure. And AAU and travel ball are a great way to do that,” Isakson said. “But we try to focus more on development and mentorship, and we want to give these kids opportunities to play against competition they don't see every day.”

But denying kids those avenues to play will almost certainly hurt those with aspirations to play at the next level.

“Is this the difficult time for kids? Absolutely. Is it going to have an impact on recruiting? A hundred percent,” Isakson said. “But also, as a college coach, our job's already to know who these kids are. Travel ball is an opportunity to see these kids playing in a different setting. We know what these guys can do against teams in the (Montana High School Association). We know, we see them. We want to see what they can do against a team from South Carolina, a team from Houston, a team from Las Vegas.”

Summer tournaments and camps haven’t been outright canceled yet, so Isakson and other Montana Hoops coaches are telling their teams to spend this time productively.

"I kind of approach Montana hoops the same way we're talking to our guys here at Providence,” Isakson said. “Stay active, do something, be outside, because if we're able to go there's no get-ready time.”

Most sports leagues have floated creative solutions to engage in competition, and travel basketball tournaments are no different. If it isn’t possible to get back to the way things were, Isakson has heard several ideas discussed.

“These AAU events and these travel ball tournaments, sometimes they're in a big convention center with 50 courts and 1,000 people in a building,” Isakson said. “That's not going to happen. But there’s been talk of showcases at private facilities with just two or three teams, no fans and live streamed. But nobody knows what the new normal is at this point. Everything is on the table.”