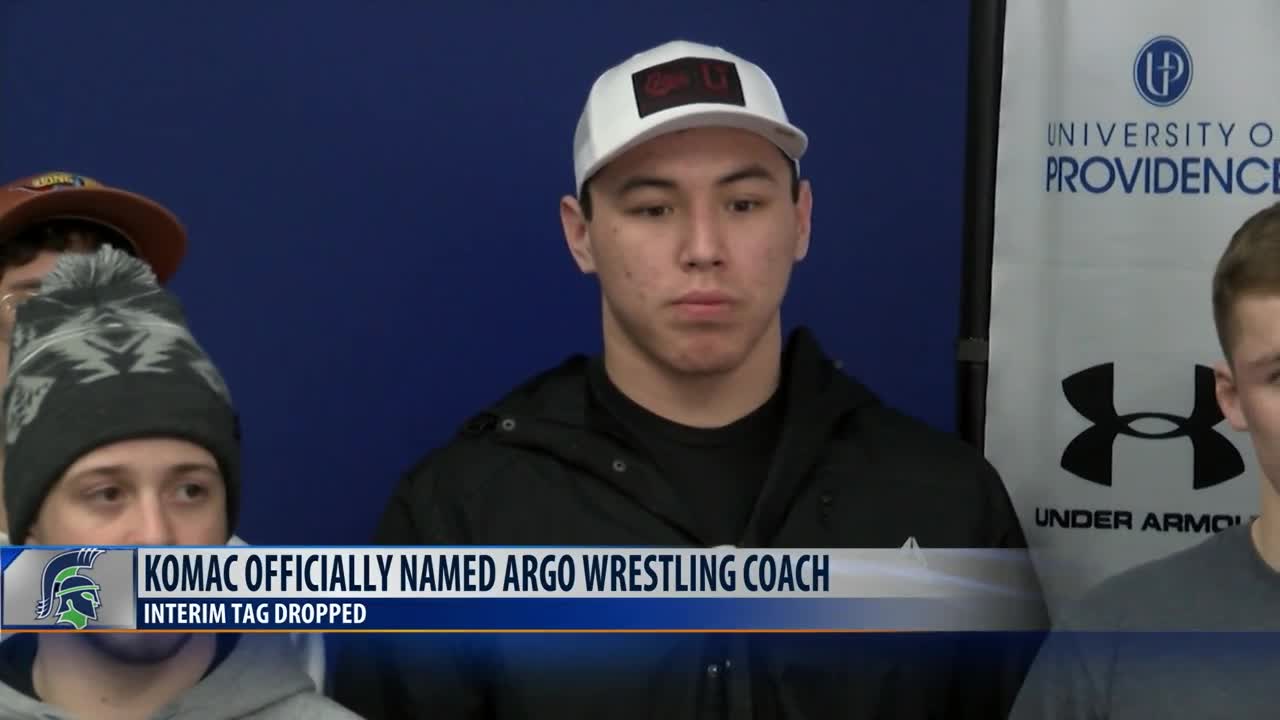 "We are excited to take off the interim title for Coach Komac," Hashley said. "He has demonstrated that he is the correct person to be the head coach of the Argo wrestling program. Coach Komac is highly respected not only in the wrestling community but also in the community of Great Falls."

Komac was the wrestling coach at Great Falls High School for 19 years before stepping into the interim role on Sept. 9. Under Komac, the Argos had as successful season, going 14-4 in duals this season and ending the season ranked 9th in the nation. This past weekend, six wrestlers qualified for Nationals.

"I'm very excited," Komac said. "I would like to thank Dave Gantt for reaching out to me six months ago and taking the patience and the time to allow me to soul search a little bit and figure out if this was the right opportunity for me and if I was the right person for this opportunity. I also want to thank Great Falls Public Schools as they were equally patient and supportive. Without the individuals here at the college and in the school district working collaboratively together, the opportunity wouldn't have been possible for me."

While at Great Falls High School, Komac has consistently kept the Bison a trophy contending team with nine Top 3 finishes in his 16 years as the head coach at Great Falls High. During that time Komac's squads won State Championships in 2013, 2014 and 2015. Komac has two runner-up finishes and three 3rd place finishes. During the 2014 season, the Bison had 8 State tournament finalists with a program record 6 individual state champions.

Though torn between leaving a plethora of good relationships and a great situation at Great Falls High School, Komac felt confident about the job that Luis Carranza would do with the Bison. His faith turned out to be correct, as Carranza led the Bison to a Montana AA State Championship.

"Leaving Great Falls High School was an extremely difficult choice," Komac said. "There was an immediate need for a position to be filled here at the college. Even more so than just an interest, I did feel like I had the ability to step up and help out. I knew that Coach Luis was very capable and ready to step in and run the Bison program. Emotionally it was a very difficult decision to make but I knew that he was capable. I believed that I was capable and I think it has gone very well for both of us this year."

"I will always be thankful to Great Falls Public Schools for the opportunity they provided me," Komac said. "They have been an amazing employer. I also want to think all the wrestlers, families, as well as the students of Great Falls High School for so many great experiences. I could not have had a more enjoyable experience as a teacher or coach the past 19 years."

As the Argos season winds down, Komac will shift his focus to the recruiting trail as he looks to complete his first recruiting class. He already has a plethora of visits lined up over the next month.

"Everyone knows that at this level recruiting is huge," Komac said. "It's our responsibility to find the kids that we want to build the program around. The last six months has taught me that this is a great place to work. From the administration down to the faculty at this school, this is a really great place to be. It's our job to show that to the recruits and their families that come through the door and show them that we can provide the education and the athletic experiences that they're looking for."

Before he gives his sole attention to recruiting, he will travel to Wichita with six Argo wrestlers who qualified for Nationals this past weekend. TJ Baun, Shonn Roberts, Jordan Komac, Hayden Schrull, John Hensley and Justin Harbison will all be heading to the National Tournament, which starts March 6.