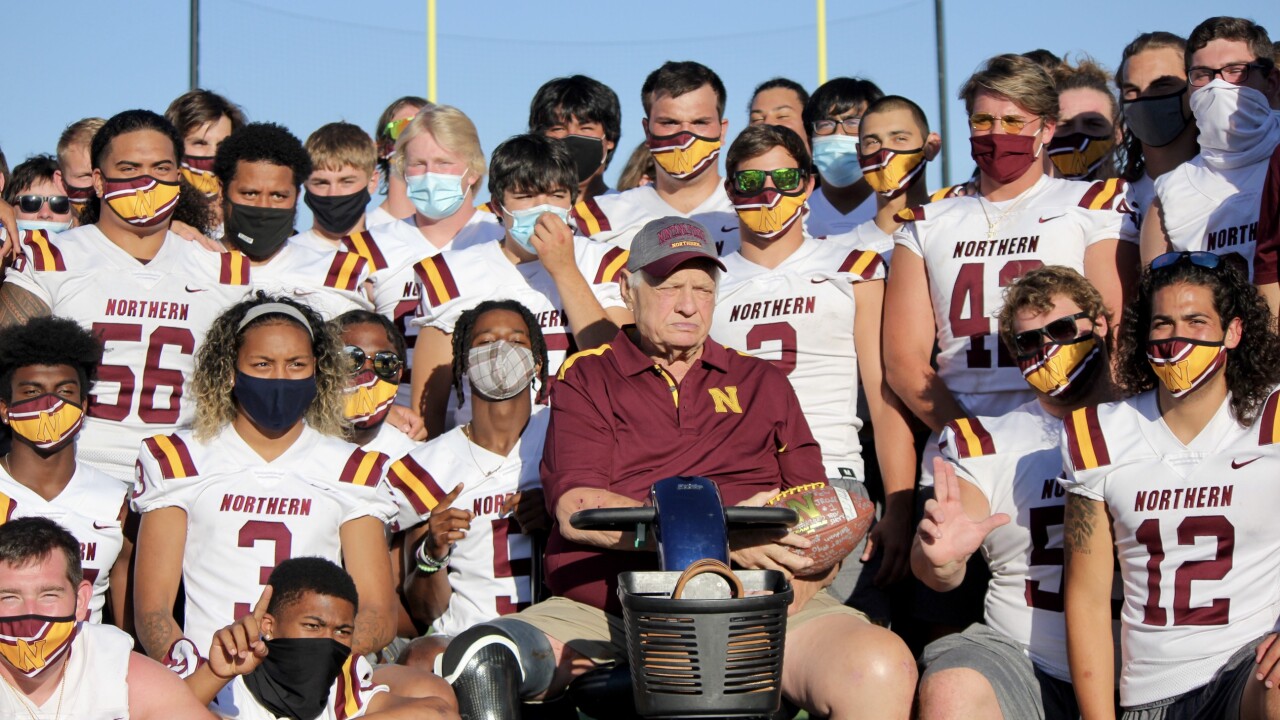 HAVRE — MSU-Northern held a ribbon-cutting ceremony Wednesday for its new football stadium, and the event had a gameday atmosphere.

“This is what it’s going to look like and feel like on Saturday afternoons,” said MSU-Northern chancellor Greg Kegel. “And that’s a big deal for us.”

And the experience was by design.

The Lights had a guest of honor in attendance they wanted to make sure saw the completed stadium in gameday shape: Hi-Line football legend and longtime MSU-Northern supporter Mike Tilleman.

“The thought of the school grabbing itself by the boot straps and pulling itself back together and then making its own identity is great,” Tilleman said. “We need football here. And it's a proud sport. And we're happy as the Tilleman family to be a part of putting this together. The stadium is beautiful and it should be here for a long time.”

The Tilleman family spearheaded the charge to bring football to MSU-Northern 20 years ago and was instrumental in supporting the drive for a new stadium. Through various fundraisers, like the Legends for Lights pheasant hunt, Tilleman and family have raised millions of dollars for student scholarships at Northern.

“He did a lot for the football program, but he and his family have done a tremendous amount just for the school itself,” Kegel said. “We’ve rallied around him and his support on different types of advisory boards and contributions to several programs that he's helped really bring along.”

But Tilleman, who was an all-Big Sky Conference defensive lineman at Montana before a 10-year career in the NFL, has always had a special place in his heart for football. When Andrew Rolin accepted the head coaching position at Northern three seasons ago, Tilleman was the first person he talked to.

“Without Mike Tilleman, without the Tilleman family, there's no Northern football,” Rolin said. “And to have him out here (Wednesday) is special. And he's special, obviously not just to Havre but the entire state of Montana -- his philanthropy and what he's done for this program.”

There was an urgency to complete the stadium in time for the fall. Before the COVID-19 pandemic moved the Frontier Conference football season to the spring, the Lights were planning on opening the season on the new turf field after years of sharing Blue Pony Stadium with Havre High School.

They also wanted to make sure Tilleman could experience a game day on the field that will bear his name. Tilleman, 76, has struggled with health issues this year and has passed along many of his duties and philanthropic efforts to his son Craig.

“It's been a little tough. He’s in the hospital the last five months and he just got out of the hospital here three weeks ago and got back to Havre about two weeks ago,” Craig said. “So it's really nice that he's been able to see this stadium and he kind of wishes he could watch some football this fall. But Northern means a lot to my dad, and it's been a very wonderful event (Wednesday).”

And the Lights made its a special event. The football team took the field to run a play. Quarterback Brenden Medina hit Marvin Williams for a 25-yard touchdown pass, and Rolin presented Tilleman with the game ball, signed by the entire team.

“Oh, that was cool. That was cool,” Tilleman said. “I never dreamt that would happen. I thought I was beyond scoring those touchdowns.”

The football and volleyball teams gathered for photos with Tilleman, and each player took the chance to thank him in person.