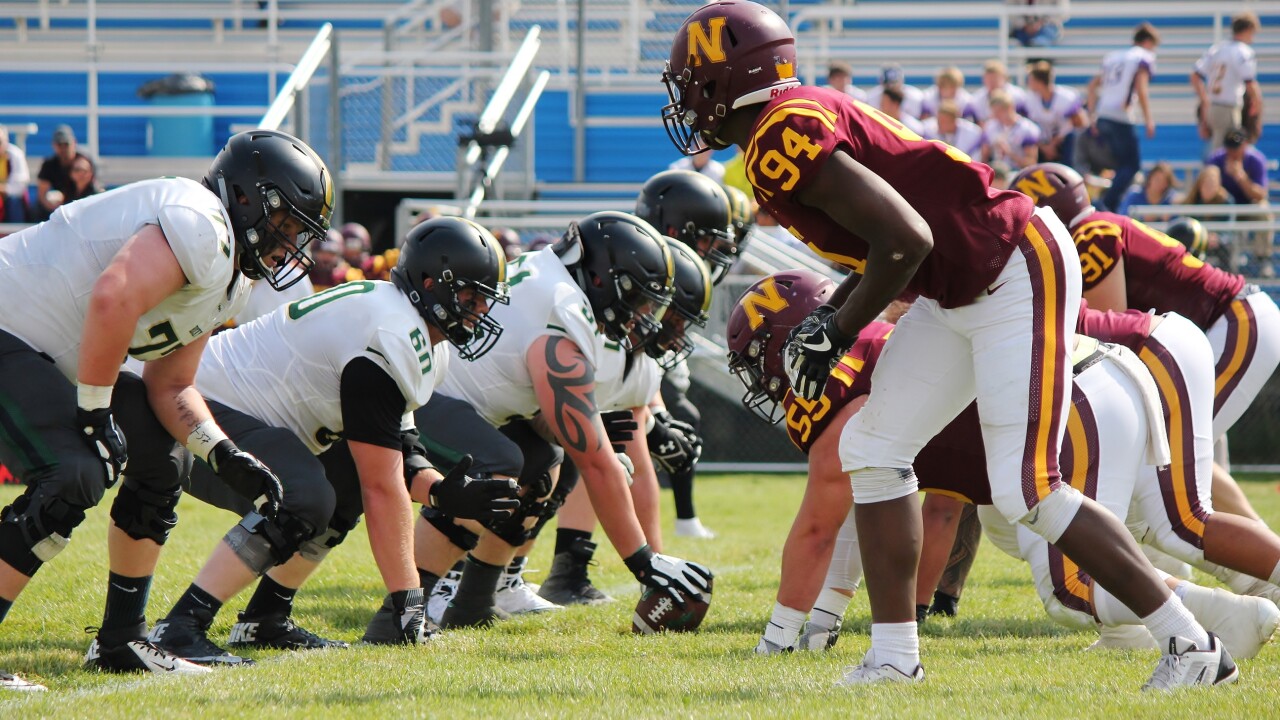 Tom Wylie/MTN Sports
The Rocky Mountain College offensive line waits for the snap during a road game at MSU-Northern during the 2019 season.

WHITEFISH -- Frontier Conference football teams will once again have to adjust their fall schedules.

Nearly one month after the league announced its athletic directors, chancellors and presidents approved an eight-game conference-only schedule for the fall of 2020, the Frontier is left scratching its head after its three out-of-state members -- College of Idaho, Eastern Oregon University and Southern Oregon University -- announced late last week they would shift their schedules to the spring due to the ongoing coronavirus pandemic.

The Cascade Collegiate Conference, which houses COI, EOU and SOU for all sports but football, announced on Friday it would delay its fall sports competitions with hopes of conducting those athletic events in the winter or spring. The initial release did not mention football, though the College of Idaho stated in its own release that C of I, Eastern Oregon and Southern Oregon would move their football schedules to the spring.

"It is at this time, we have made the difficult decision to transition all of our fall sports to the spring season," College of Idaho athletic director Reagan Rossi said in a release. "While we are still working through decisions with the Frontier Conference presidents and the NAIA, we felt it was important for our decision to be unified for all of our fall sports and to communicate as such in a timely manner. We will work with our CCC Commissioner to build our spring schedules and will await more direction from the Frontier Conference and the NAIA before determining a football schedule. We value our partnership with the Frontier Conference and are hopeful their presidents and members understand our decision."

MTN Sports spoke with Frontier Conference commissioner Kent Paulson on Thursday morning, one day before the Cascade officially announced its postponement of fall sports, and discussed the potential of the league's out-of-state schools not being able to participate in a fall schedule. That decision drops the Frontier from eight football members to five: Carroll College, Montana Tech, Montana Western, Montana State University-Northern and Rocky Mountain College.

"You plan for the best, but you prepare for the worst. And if we couldn't have every team play ... I think that you'd have to be prepared, again, as part of your modification and flexibility, you'd have to be prepared for teams ending up playing differing numbers of games," Paulson said. "You'd just do your best to try to mix and match. Again, if schools couldn't play because their state just wouldn't allow for it in football, it's not a crime against that school. I mean, they're doing their darndest to make this work. Yet if they can't play, we certainly understand.

"Those that can't play don't want to hold back those that can, but those that can have to understand that the brethren, they're trying their darndest, but they just maybe can't make this work this year. And again, you reach that threshold where, you don't throw up your arms in disgust or dismay, you just simply say, 'Hey, let's go to the next-best plan.'"

Paulson confirmed with MTN Sports on Monday morning that the Yotes, Mountaineers and Raiders plan to conduct their football seasons in the spring but assured the league understands and backs the decision.

"We're behind them 100 percent," Paulson said Monday. "There is no division between the (Cascade and Frontier) conferences, nor the schools. Every conference, every state, every team has to do what they have to do during this unprecedented time."

Paulson said the league has a scheduled call with its athletic directors later this week, again with the intent of finalizing a schedule that fits. With only the five Montana teams still on track for a fall football season, teams will likely play one another home and away, with one program forced to a bye week each Saturday.

Paulson also said he hopes a schedule could be created that would limit a team from having to travel for multiple games in a row.

One of the greatest impacts, aside from the schedule, for the Frontier is the drop from eight football programs to five, one below the required number to earn an automatic berth into the NAIA's postseason. Any league with six or more members is guaranteed its conference champion will earn a place in the national championship bracket, which is scheduled to begin on Nov. 21.

The NAIA also requires 50 percent of its football members compete in a season to hold postseason events, and, according to Paulson, nearly 70 percent of schools have indicated at this time they plan to compete this fall.

While the Frontier Conference currently plans to trudge onward with a fall football season, Paulson understands flexibility will be key and that the health of the league's student-athletes, coaches and fans is the most important factor in continuing with those plans.

"We have to have a baseline where, whether you're the home team or the visiting team, you can expect that basic health protocols will be met," said Paulson. "Safety of our student-athletes is just paramount and it's first and foremost. ... And we know that we're going to be monitoring the individual athletes, testing is going to be of great importance."

"The new normal isn't going to look normal, but you know what, we certainly hope that we can play something this fall," he continued. "And for our institutions in Montana, Idaho, Oregon, just hope that they can get those institutions safely open and get the kids back to school, get the professors back to teach, the students back to learn. This is our business. This is what we do. And every business owner hopes that they can meet with some success."