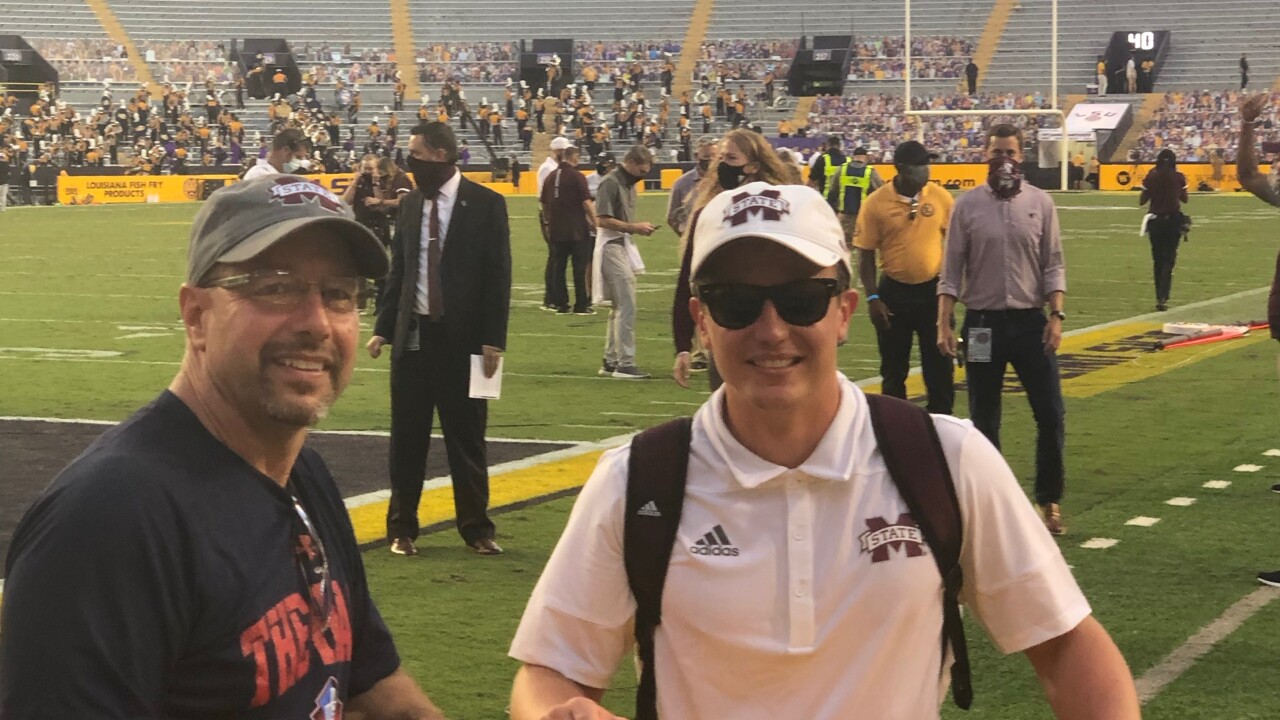 STARKVILLE, Miss. -- Tucker Meyer has been around football his entire life.

First as a player at Fairfield, then at Rocky Mountain College. After graduation he jumped directly into coaching, first at Rocky and then a season as an assistant at the University of Montana.

But Meyer wanted to expand his horizons outside of Montana and landed a graduate assistant position at Mississippi State in the SEC last winter. Though he’s fluent in football and has experienced the game at all levels, Meyer’s first day on the job was an eye-opening experience.

“We started with winter conditioning and I jumped into it and all of a sudden I'm watching these five-star athletes run around and compete,” Meyer recalled. “I mean, some of these guys are are capable of things that you don't even imagine are humanly possible.”

While college football is on hold until 2021 in the Treasure State due to the COVID-19 pandemic, the SEC and other larger conferences are moving forward with a fall schedule.

Meyer has a front-row seat to one of the more unique environments in the country, working under well-known head coach Mike Leach in his first year at MSU and reporting directly to defensive coordinator Zach Arnett.

“I kind of assist with both the linebacker coaching and the defensive line coaching,” Meyer said. “And then I do scripts to get ready for practice, film breakdown, run the scout team, all the fun stuff.”

Between practice and game prep, Meyer is also a full-time student working toward a master's degree in Workforce Educational Leadership.

"I always told people I'd want to be like a physical therapist or like an engineer or something like that. But honestly, I really had no intention of doing either of those things,” Meyer said. “I wanted to coach when I got done playing, and I was fortunate to get a couple of jobs and that's where it's gotten me.”

And Meyer couldn’t have asked for a better ‘welcome to the SEC’ moment. In his first game of the season, the Bulldogs upset reigning FBS national champion LSU while Meyer was in the booth. His parents, Les and Jolyn, were in attendance.

“I couldn't imagine doing something like that without them,” Meyer said. “And at the end of the day, you're a little bit shocked. I watched LSU and these other teams on TV and now I’m part of a team that beat them. Never something I could have ever imagined happening.”

There aren’t many Montanans in the SEC in any capacity, so Meyer is proud to represent the Treasure State at college football’s highest level.

“They say I have an accent, which I disagree with,” Meyer laughed. “But it’s hard not to brag because of how great Montana is. I talk to people a lot about the hunting, the fishing and the scenery, and then the people that I was fortunate enough to be around.”

While football in Montana and SEC football might seem worlds apart to an outsider, Meyer said there are far more similarities than differences.

“It's still football, it's still trying to get your guys to do the best they can do," he said. "And you know, it's funny - Mississippi, they love their football. And so does Montana. So to be a part of this whole ride is very special to me.”

Mississippi State fell to unranked Arkansas in its second game of the season. And while Meyer and the Bulldogs are not looking past their next opponent, Kentucky, he is very much looking forward to experiencing the Egg Bowl between Miss. St and Ole Miss.

“The Egg Bowl is very, very similar to Cat-Griz I would say. There's that deep, deep rivalry here, which is obviously really cool to be a part of," Meyer said.