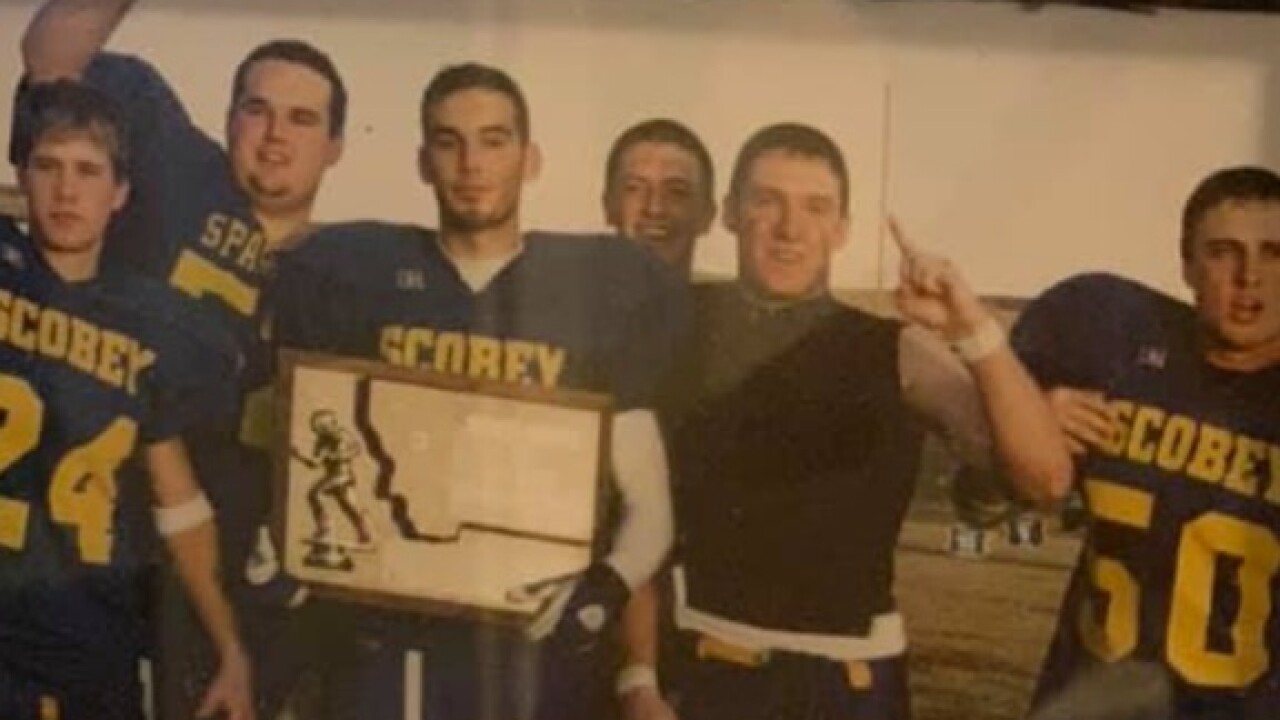 BILLINGS and DENVER -- It hadn't really dawned on Zach Audet that 18 years had passed since he and his teammates last led Scobey High School into a state football championship.

But when the 2020 Spartans punched their ticket to the 8-Man state championship game last weekend, the memories, as well as realization, came rushing back.

"It's not something that I dwell on often, but when this stuff comes up it's interesting to think back on and reminisce a little bit," said Audet, who was the starting quarterback on Scobey's 2002 state championship-winning club. "It's definitely been a while, been a whole other bunch of 18-year-old human beings growing up through there, so you're right, I don't think any of those guys were probably alive back in the day, but, you know, hopefully they know a little bit about the history."

It's likely this year's crop of Spartans has indeed received a history lesson this week:

The five previous times Scobey has appeared in an 8-Man state championship game.

The 18 years that have passed since the Spartans last competed for a title.

Audet and the '02 Spartans were a bit of a Cinderella story. They boasted a first-year coach in Jon Baker, lost a bevy of talented seniors from a state runner-up finish the year prior and seemingly remained little brother to powerhouse Wibaux, which had topped them in the title game in 2001.

But, motivation is a powerful thing.

"We lost to Wibaux the year before in the championship game and that stung for a good year. Probably the biggest thing I remember is, we lost a lot of seniors that year (2001) and nobody really thought we were going to do much the following year, and that was a big motivating factor for us," said Audet. "And I really just remember the way we kind of came together and really just kind of shut out everybody else and just did what we needed to do."

"I think that loss to Wibaux early on was kind of a pivotal thing for us in terms of coming together, really figuring things out," Eric Haddenhorst, Scobey's fullback and linebacker, recalled of the Spartans' 26-14 setback to the Longhorns in the 2002 regular season. "And then from there, it was just kind of on a roll. And then, of course, when we got to meet Wibaux later in the year in the state championship, that was everything to us to try to avenge that loss and come back and win one after taking second place the year prior to that."

In the beginning, that Nov. 16, 2002 contest looked like Scobey was in for another long day. Wibaux, which had won the 2001 8-Man championship by defeating the Spartans 42-30 at Plainsman Field in Scobey, scored on the first drive of the game.

Recalled Audet: "(We) kind of had to rally the troops a little in the huddle there and be like, 'Guys, you know, this isn't going to happen again.' And I don't know, something just sparked, and after that first little shot to the face, it kind of woke us up and we just kind of went with it from there."

What followed was shocking, even to this day. After four touchdowns from Audet, two from tailback Jude Chabot, who actually lived in Canada, but drove across the border each day to attend Scobey, and an exclamation point score from Haddenhorst, Scobey left the field as a 50-6 victor and the Montana 8-Man state champion.

Scobey also snapped Wibaux's 34-game win streak in the process, which left the Longhorns tied with the Spartans of the mid-1990s, who also won 34 consecutive games.

"Unbelievable. I mean, I'll never forget that score. I still to this day, I can't really figure out how we pulled it off, because they were such a good team, had so many good athletes, you know what I mean?" pondered Haddenhorst. "Just big guys, too. I don't know, things just clicked that day and came together as a team, and that's really what it felt like, is things clicked. It was great."

"It's definitely the one you remember, and it has to do a lot with just the tradition of it," said Audet. "Back then, we did know our history and we knew what the Spartan tradition meant, and really we were just trying to uphold it. We did, thankfully, and we got to right some wrongs that happened in the year and the last year and preserve some history, as well, at the same time."

Now, nearly two decades later, Audet and Haddenhorst again feel that Scobey pride as the 2020 Spartans march nearly 500 miles to Drummond to face the Titans of Drummond-Philipsburg, who are competing in their third championship in the past four years, in Saturday's 8-Man title game.

Both former Spartans are vaguely familiar with players on this year's squad -- last names like Cromwell, Handran, Tande and Stentoft ring a bell -- and Haddenhorst actually caught portions of a game or two via Nemont.TV streaming.

"The extent of my knowledge really goes through the hometown paper when it pops up online every week. I don't really know too much about the boys in particular, but I follow them and discuss what they're doing with whomever I can," said Audet. "And yeah, it's been good to see them get back in the (championship) game. It's been a while, as you said, so yeah, hopefully we can do some damage this weekend."

"It's funny, I do the same thing," laughed Haddenhorst. "We've gotten the Daniels County Leader delivered to us once a week since we graduated high school. And so, once a week I open it up and I pay attention to the scores, whether it's basketball or football or anything like that, track, and I'm always going through the article and then I'm pretty quickly flipping to the stats to compare how kids are doing these days to what we were doing, you know? I try to pay attention as much as I can."

That's admittedly become more difficult over the years, between work, family and other obligations. Audet lives in Billings and works as a VP of lending at a financial institution, while Haddenhorst, his wife and two sons reside in Denver where he works for a startup protein bar business.

Like other Scobey grads across the country, this week they showcase their Spartan pride. Though neither will be in attendance this weekend, each offered words of wisdom to the Spartans taking the field for Saturday's championship.

"I think the thing I really wanted to make sure I did was soak in the moment, because it can go by so quickly. You wake up in the morning, you're on the bus, you're on the field, warm-ups and then the game. It just goes by so quickly," said Haddenhorst. "I look back on it and it's hard to remember some of that stuff, so taking the time to really live in the moment, I think, is a really big deal because you want this to be something that you remember for a long time, because it's that special. And then I think the other thing I would say is, if you're going to remember it for a long time, the other important thing is to leave it all on the field because if you're going to look back on it, you never want to have any regrets, right? Even if it's win or lose, you want to look back on it and saying, 'I left everything on the field.'"

"Just playing in the state championship game, getting to that particular level, it's special. And I would tell them to savor it," echoed Audet. "But I can tell you this, adding to that Spartan tradition and making your own stake and claim to it, it's something you don't forget. And it's a big deal for that community up there. It's just a feeling like you have never had before, and it's just a different feeling than basketball or anything else. The camaraderie and everything else, just enjoy it and do your damnedest to uphold the tradition."

Solid advice, 18 years in the making.