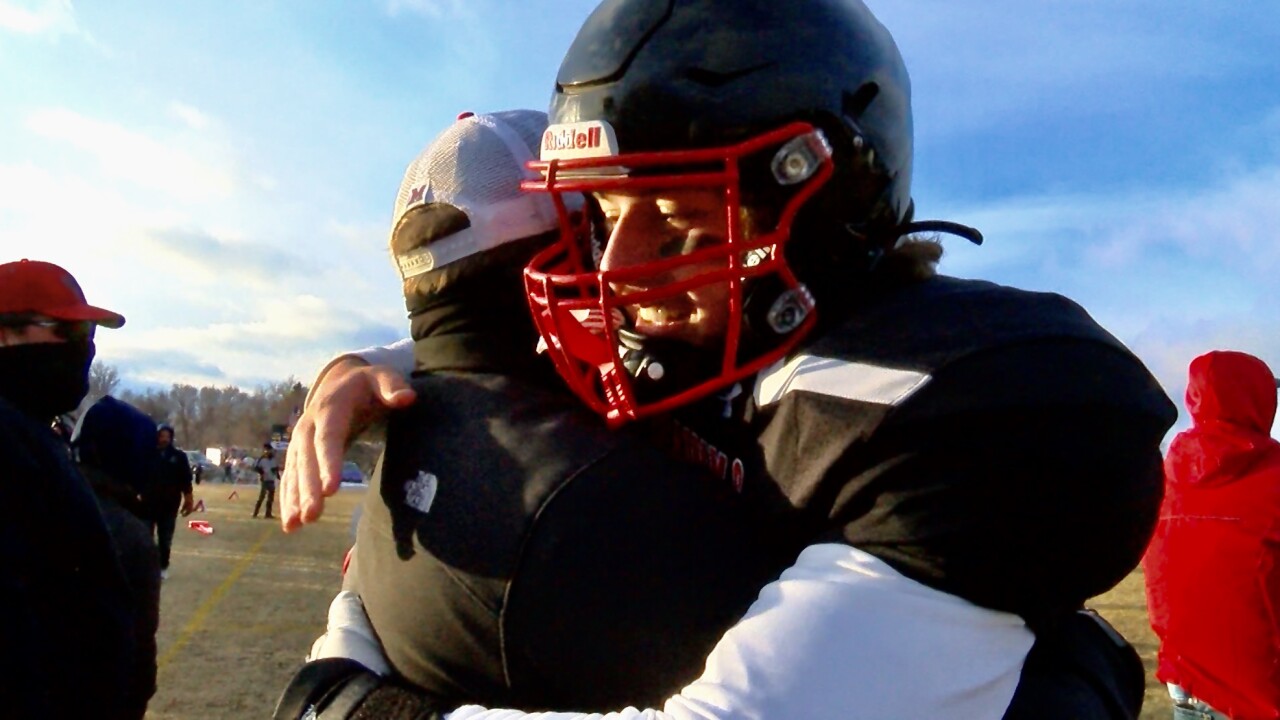 The sound of cheering was punctuated by the sound of fireworks. Red, black and white balloons filled the air.

Head coach Michael Reiter breathed a sigh of relief and allowed his mind to drift to the impending celebration.

“I hope we have have the firetrucks going up and down Main Street in both towns again,” he said. “We had one this morning, let’s fire up the sirens again.”

The communities of Froid and Medicine Lake have been represented in a state championship game three times before Saturday’s 6-Man final. And all three times they finished runner-up (1952, 1985 and 2000).

But against White Sulphur Springs, all the waiting, all the close calls, and all the years of watching Eastern Division rivals breaking through finally came to an end. After a dominant performance, the Redhawks were finally able to hoist a trophy.

“It’s amazing, our community has been there, we have people in this community who played in the past,” said freshman quarterback Mason Dethman. “It just gave us motivation and brought us to this game.”

The night before the championship, the 2020 team watched a video from members of past runner-up teams sharing their memories and wishing the Redhawks luck in the title game.

“We had a video (Friday) night of all the teams that made it from the 2000 team and the 1985 team, all the supporters we had,” said senior Cole Miller. “We weren’t just doing this for us, we were doing it for them, too, and it feels amazing.”

Though the wait was long for its first title, there’s reason to believe the team is not done competing for titles. The Redhawks lose five key seniors, but they have loads of talent returning.

Ashdyn Hobbs, Connor Huft and Brett Stentoft are junior starters who will help lead the team in 2020. And the underclassmen have Froid-Medicine Lake positioned for success in the years to come.

That group is headlined by Dethman, one of the state’s best athletes who made his presence felt on Saturday with a 73-yard rushing touchdown, a 30-yard passing touchdown and a 71-yard interception returned for touchdown that sealed the game.

“We’ll be back next year, we’re going to keep on going. Next year will be fun,” Dethman said. “We’re going to enjoy this one for the next couple weeks, and we’ll start on next year in a couple months.”

Now that Dethman has a taste of championship football, he’s determined to help the Redhawks make more deep postseason runs over his next three seasons suiting up.

“I’d like to see us come back every year, making the playoffs and keep going deep in the playoffs," Dethman said.

“Next year they’ll be super tough,” Miller said. “We lose five seniors, but the juniors are really good.”