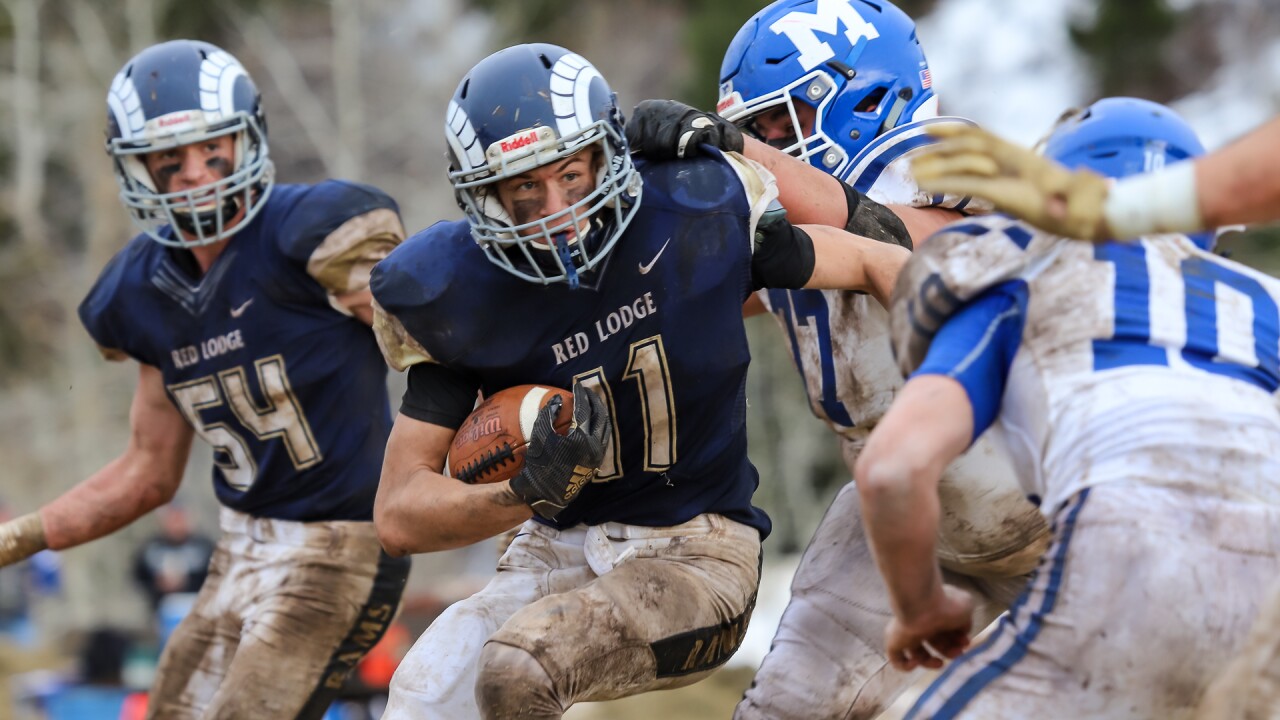 Colleen Vomund for MontanaSports.com
Red Lodge&#39;s Braden Tomlin (11) carries the ball in the Rams&#39; quarterfinal win over Malta in the Class B state football playoffs.

A year ago at this time, it was unlikely even the best prognosticator could have predicted Red Lodge meeting Eureka in the semifinal round of the 2019 Class B state football playoffs.

Both teams lost in the first round of the playoffs last year — the Rams qualifying for the postseason despite winning just two games last fall. They weren’t any better in 2017 or 2016, either.

The Lions, meanwhile, were taking the seemingly inevitable step back after winning consecutive state titles in 2016 and 2017.

Suffice to say, neither program was satisfied with its 2018 season.

“The expectation for our football team is that we will win and we will be in these kinds of positions to compete for championships. When we weren’t that last year — we had some injuries that happened — when we weren’t that, it was a really frustrating time for the kids and the coaches and everybody. It was really frustrating,” said Eureka coach Trevor Utter. “But it’s good to be back.”

“The last two years have been a real tough time for our kids, a lot of growing experiences for them,” said Red Lodge coach John Fitzgerald. “And to the see the effort that they’ve put in, the weight room, the offseason training, then see the fruits of the labor from that has been pretty special.”

While their roads to disappointment were different last year, the paths to prosperity have been similar this year. Red Lodge dominated the Eastern B behind a stingy defense, dynamic rushing attack and opportunistic pass offense. The Rams are 10-0 entering Saturday’s semifinal game with Eureka, which is also 10-0 after running roughshod over the Western B. The Lions, too, have a stout defense and high-scoring offense — built first on the run game but with the ability to beat teams through the air.

The teams aren’t mirror images of each other, but there are plenty of similarities.

“(Red Lodge is) a good football team through and through. You are not going to see them make mistakes in any of the three phases of the game. … They are very sound, they are very well-coached by John,” echoed Utter.

“You’re going to see just great athletes on both sides of the ball on Saturday,” he added.

Red Lodge will have its eyes on Eureka’s star tandem of Hank Dunn and Chet McCully. McCully has rushed for more than 600 yards in two playoffs games and has 1,640 on the season. Dunn passed for 274 yards last week, but he also has 663 rushing yards on the season, including four 100-yard games.

The Lions will look to slow Red Lodge’s multi-dimensional rushing offense, which has heavily involved four players over the course of the season. Finnegan Davis has been the primary ball-carrier in the Rams’ two playoff wins, though, running 19 times for 132 yards and two touchdowns in the first round against Bigfork and 11 times for 84 yards and a touchdown last week against Malta. Rizon Berndt, Jay Jetmore, Braden Tomlin and quarterback Austin Heimer have also played key roles.

It goes without saying — but both coaches said it anyway — that both teams feature strong offensive lines and tight ends to pave the way for those carrying the ball.

“I tell the boys all week it’s a business trip,” said Fitzgerald, who noted the Rams will leave Red Lodge on Thursday after practice. They’ll spend Thursday night in Butte and travel to Whitefish on Friday, stopping in Missoula for a final practice. Saturday’s kickoff is scheduled for 1 p.m. at Eureka.

“As you get into the postseason, when you have a good group of kids, you never want it to end. You always want to keep going,” Fitzgerald said. “I just love the fact that I have the opportunity to coach these kids each and every day and week.”