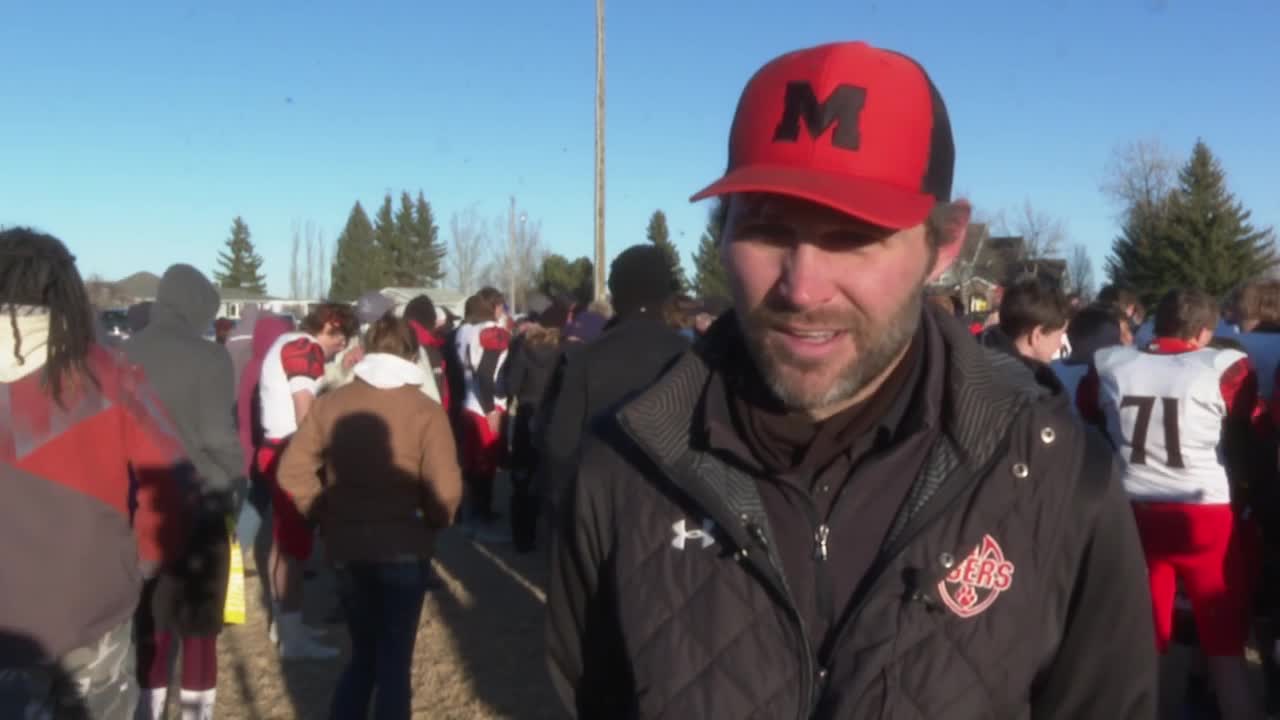 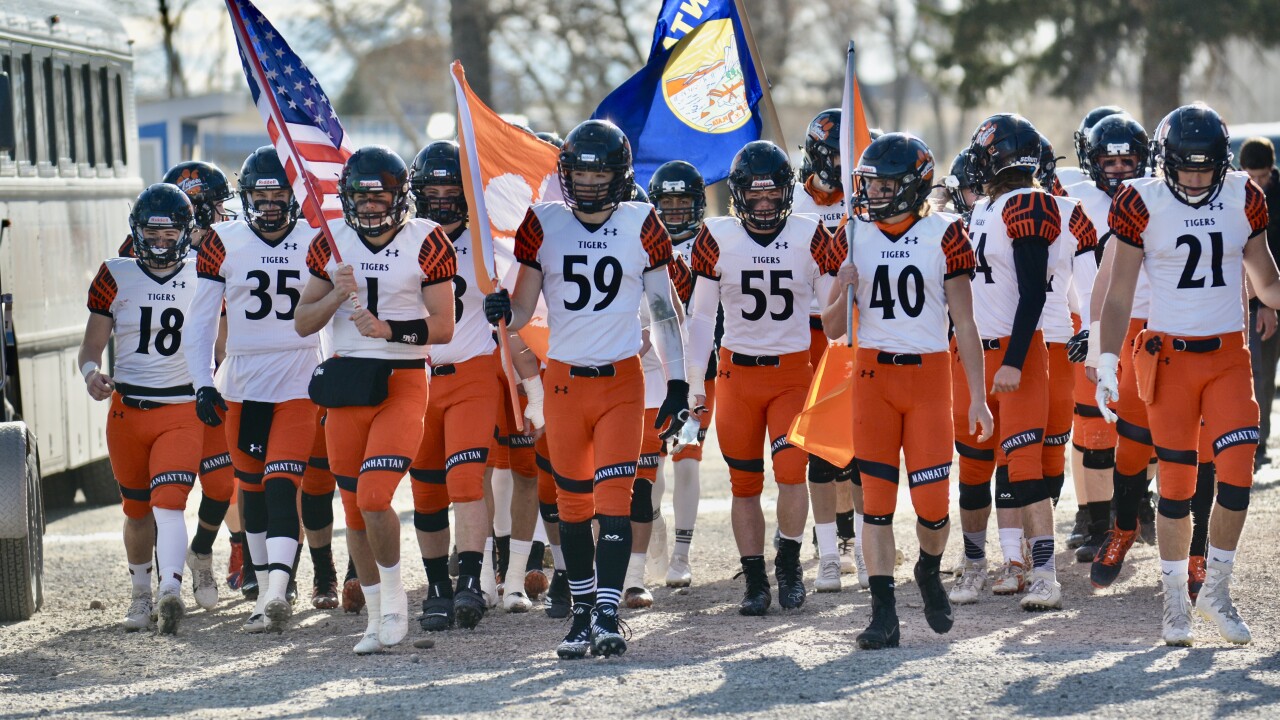 FAIRFIELD — Redemption is sweet for Manhattan.

A year after falling in the Class B football state championship game, the Tigers bounced back with an undefeated season, capped off by a 23-6 win over Fairfield in the title game.

“It’s hard to accept right now, it’s crazy,” said senior quarterback Caden Holgate after the final buzzer. “I love this group of guys and I’m thankful that we could do it through this pandemic.”

"Just super proud and excited to watch these kids celebrate," said head coach Chris Grabowska. "They've worked so hard for this for so long and a lot of generations of Tigers have worked hard for this to get to this point. And we're finally here and they get to celebrate it, our community gets to celebrate it's a great feeling."

In a season where the Tigers rolled over nearly every opponent they faced, Fairfield made Manhattan work for its first state trophy in program history.

The Eagles held Manhattan to a three-and-out on the opening possession and then capitalized with a scoring drive. Junior tight end Daniel Faith scored on a 34-yard run to put the Eagles on top 6-0, putting Manhattan in the rare position of trailing.

“Big game like this you kind of expect some stuff like that,” Holgate said. “We started with a few turnovers and whatnot, but we fought through it.”

On Manhattan’s next possession, Holgate threw an interception to Faith, which gave Fairfield the ball in Tigers territory again. But Manhattan's defense came alive while it waited for the offense to catch up, holding Fairfield scoreless the rest of the way.

“Just hard-nosed football,” Holgate said. “We didn’t want to give up any big plays, and I thought we did a good job of holding them and not letting them get any big plays.”

Late into the second quarter, Manhattan ventured into Fairfield territory for the first time all game. Holgate found Corban Johnson for a 27-yard score to tie the game at 6-6, then Tate Bowler caught the two-point conversion to give Manhattan an 8-6 lead at halftime.

Fairfield received the ball to start the third quarter, but quarterback Guidry Giles was intercepted by Sven Stenberg, who returned the ball for a touchdown, giving Manhattan a 16-6 lead after an Isaac Richardson screen pass for the two-point conversion.

Manhattan would make several more trips into Fairfield territory, but turnovers prevented the Tigers from taking a commanding lead. Fairfield forced four fumbles on the afternoon and recovered all of them, but the Eagles couldn’t make the Tigers pay.

After Manhattan fumbled on the 3-yard line early in the fourth quarter, Fairfield went three-and-out. The ensuing punt went out of bounds at the Tiger 30-yard line, and two plays later the Tigers made up for their gaffe, as Bowler hauled in a 29-yard score to put Manhattan up 23-6.

Holgate picked off Giles on the ensuing Fairfield possession to seal the game, then the Tigers used a few first downs to run out the clock.

When the clock struck zero, the celebration was on. Senior lineman Cayl DeBoer accepted the championship trophy for Manhattan in an emotional moment. DeBoer suffered serious internal injuries in a game earlier this season and was hospitalized for an extended period of time,

Manhattan’s motto this season was, “Do it for Cayl” with each player wearing his No. 62 decal on their helmets.

“It’s emotional,” Holgate said. “It sucked losing him. I love him. We’ve been fighting for him ever since that happened. We’re just grateful and thankful that we could get that done.”

It's fitting that Manhattan's win came over Fairfield, which is perhaps the most consistently competitive Class B teams in the state. The Eagles have advanced to the Class B title game nine times since 2005, and have won three state titles in that span. Manhattan has made the playoffs in each of the last six seasons, and made their first title appearance last year.

The Tigers have been chasing the success that Fairfield has enjoyed for years, and Saturday's win may have been a turning point for the Manhattan program.

"Yeah, you know, we've been looking up to Fairfield for years. And, you know, they have a great program. And we've modeled a lot of our program after them," Grabowska said. "We've wanted to be like them for years. And they're always well coached, they got good defense, they run the ball. We knew we had to come in here and play a great game today and to be able to come out victorious. And our kids did that today. I'm just super excited for them."