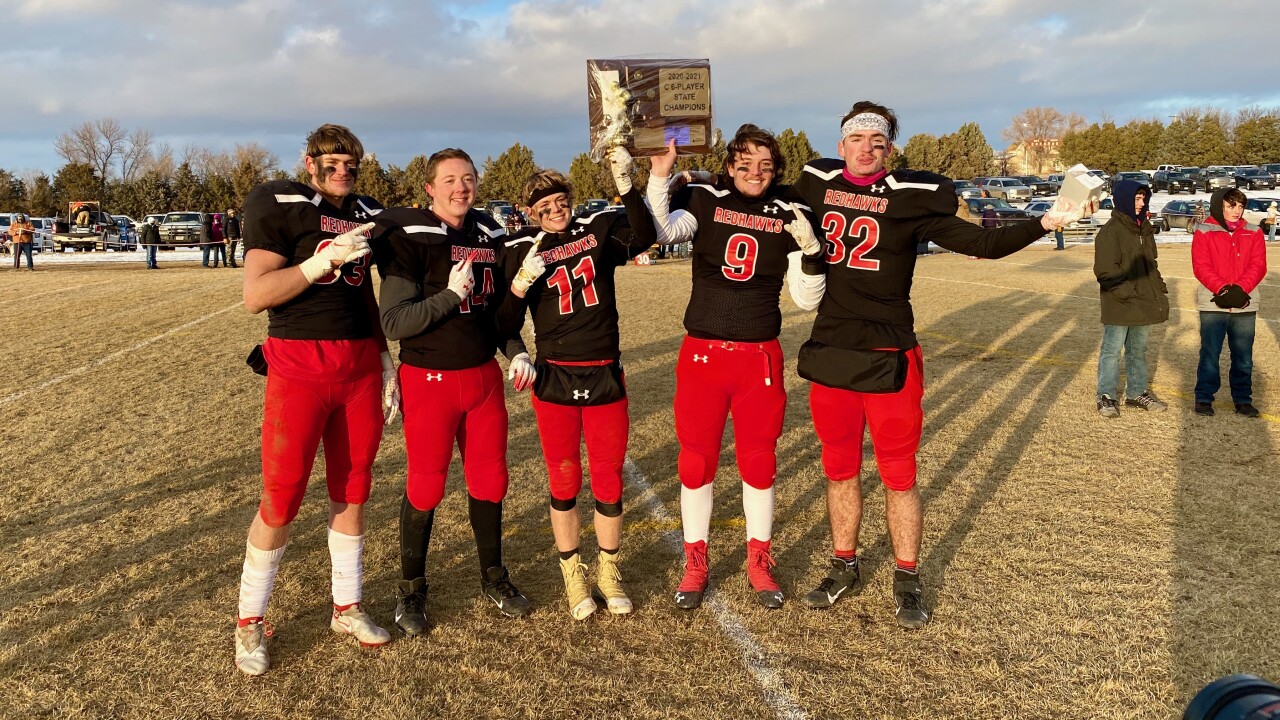 MEDICINE LAKE — A day that started with firetrucks rolling through the towns of Froid and Medicine Lake ended with fireworks and a celebration.

The game had the makings of a shootout with both teams trading scores on their opening possessions. Ashdyn Hobbs opened the scoring for the Redhawks with a 6-yard touchdown, then the Hornets' Sam Davis hit Andrew Davis for a 16-yard pass to make it 8-6.

Two plays later, Froid-Medicine Lake freshman Mason Dethman ran for a 73-yard score to make it 16-6. After a turnover, Dethman passed to Colt Miller for a 30-yard touchdown to make it 22-6.

Before the half, the Davis-to-Davis connection struck again for a long 76-yard White Sulphur Springs touchdown to make it 22-13 at the break.

Froid-Medicine Lake would come out to dominate the second half, scoring first on another Hobbs touchdown to make it 30-13, and then Dethman ran an interception back for a 71-yard touchdown to help the Redhawks take complete control of the game, 38-13.

Both teams would trade scores in the fourth quarter, with Hobbs scoring from 2 yards out and Sam Davis hauling in a 47-yard touchdown for the Hornets, but the outcome was never in doubt after Dethman’s interception.

After the trophies were presented, the five Redhawks' seniors let out a holler. This title was a long time coming for the entire community,

“We had a video (Friday) night of all the teams the made it, from the 2000 team and the 1985 team, all the supporters we had,” Miller said. “We weren’t just doing this for us, we were doing it for them, too, and it feels amazing.”

The Redhawks, who return plenty of talent to next year’s team, ought to be a force in the 6-Man classification for many years to come.

“It’s a great feeling, it’s the best feeling ever. The kids did their jobs so well," said Froid-Medicine Lake coach Michael Reiter. "They worked for it, they earned it, they should enjoy this for as long as it can last, at least until their next sport comes on.”