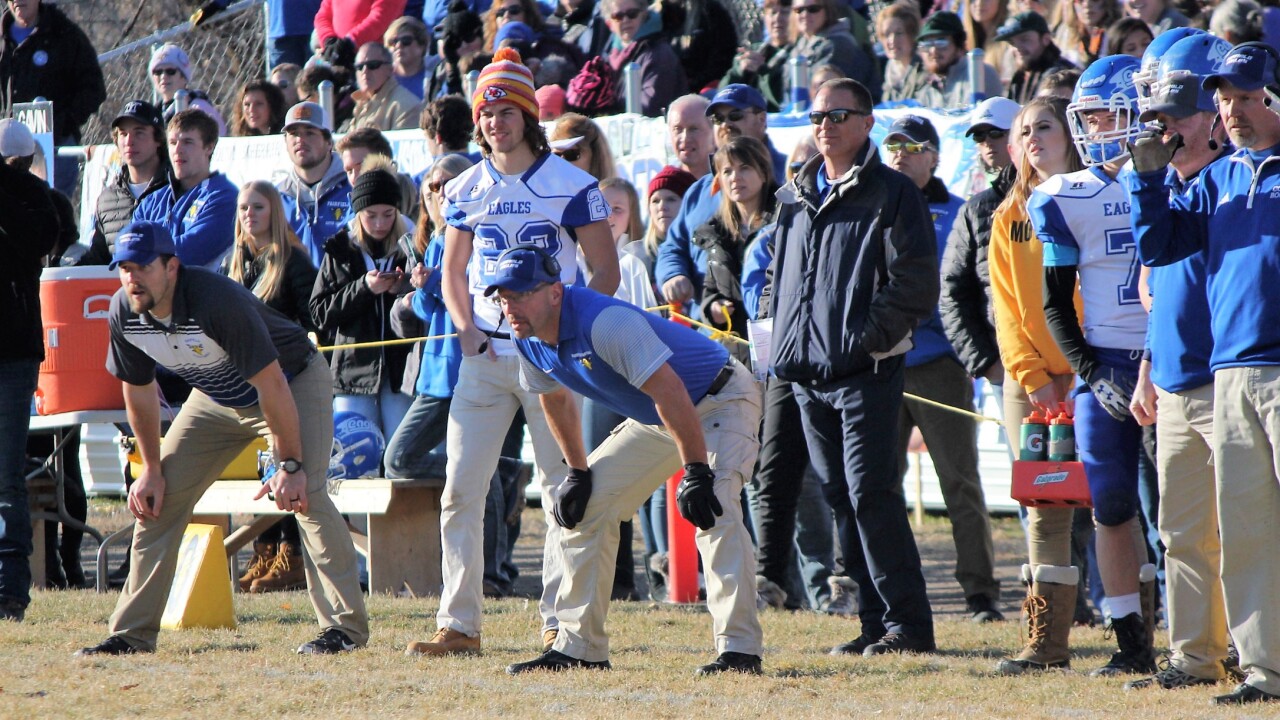 It might have been a slow build in Les Meyer's first years coaching the Fairfield football program.

But the annual rebuild has taken hold pretty quickly over the past 15 seasons. The Eagles haven’t missed the playoffs since the 2003 season, and they’ve played in eight championship games since, winning their past three appearances (2011, 2015 and 2018).

“I think the bottom line is, we have pretty good kids. What I mean, I don’t mean that they’re always the best athletes, but they’re just pretty good kids, and they work hard,” Meyer said. “The family and community support’s good. And the expectations from the parents and community are high, so I think the kids work to try to meet those expectations. It’s not easy, but they work hard and I guess they buy into what we as coaches are selling, too, so that probably helps, as well.”

“I’ve got a ton of respect for coach Meyer and what he does there and with his staff. It’s a staff that’s been together for a long, long time,” said Missoula Loyola coach Todd Hughes, who lost to Meyer and the Eagles in last year’s championship game. “Until somebody knocks them off that peg and they’re not in that playoff mix all the time, year in and year out, they’re the ones that we’re shooting for. Obviously they’re the state champs last year. They’re the ones we want to measure ourself against the best.”

Loyola will get an early litmus test against Fairfield again this fall when the teams meet up in the second week of the season. The Rams, though, must first play Huntley Project at Bobcat Stadium on Friday.
It’s a difficult start to the 2019 season — Loyola’s third non-conference game is against Manhattan, one of the perceived favorites in the Southern B — but it’s an opportunity Hughes and his Rams relish.

“We get a chance to gauge ourself against the top teams in the east part of the state. This year, we got Huntley, Fairfield, Manhattan. They’re all three really good programs coached by really good staffs that have had a lot of success. They’re all playoff teams from a year ago. It just kind of gets us stacked up,” Hughes said.

If it wasn’t for Fairfield’s perennial prowess, Loyola might be considered the team to beat in Class B. But the Treasure State Media Poll, conducted by Anthony Nachreiner out of Kalispell, still has Fairfield in the No. 1 spot.

“This team seems to be ready and willing to put their own stamp on the 2019 team. Those guys are gone and these guys are now, they’re enthusiastic, they’re upbeat, they’ve done a pretty good job in the summertime for the most part. I think they’re ready to have their own team. It’s their time,” Les Meyer said, noting that players like Keeley Bake, Conner Klick, Thomas Troy and Gabe Roberts have risen into leadership roles.

Loyola, too, has seen guys develop into leaders, featuring a senior-laden roster that figures to be a force in the Western B. According to Hughes, the Rams’ offensive line is made up of all seniors, including Liam Haffey, Bridger Danielson and Tommy Leonard.

“The offensive line, like I said, is quite possibly the best offensive line that I’ve had since I’ve been here,” Hughes said. “Then obviously they flip over and they play on the defensive side along with some linebackers, young linebackers that are really salty and know how to play the game of football. Both fronts inside the box are strengths.”

The exodus of top-level talent from Class B has opened the door for more competition across the class. Loyola will get stiff challenges in the West from Bigfork, Eureka and Florence; Fairfield will be challenged by Cut Bank and Malta in an improved Northern B; and Red Lodge is expected to push Colstrip and Huntley Project in the East.

Manhattan might be a slight favorite in the ultra-competitive South, but coaches said literally every team in the league — Big Timber, Columbus, Jefferson, Three Forks, Townsend and Whitehall — could contend for a playoff berth.

“In all my years of coaching here, I have never seen the conference so difficult to predict. Normally I could tell you which two or three teams are going to be in it. This year, I really don’t have a clue. And I’ve talked to some of the other coaches,” said Townsend coach Travis Rauh. “For some reasons, you would think Jefferson should have a strong team this year, but you’re not quite sure. Other things would tell you Manhattan would have a strong team, not quite sure. And I imagine when they talk about Townsend, possibility’s there, but a lot of question marks, as well. We will see.”