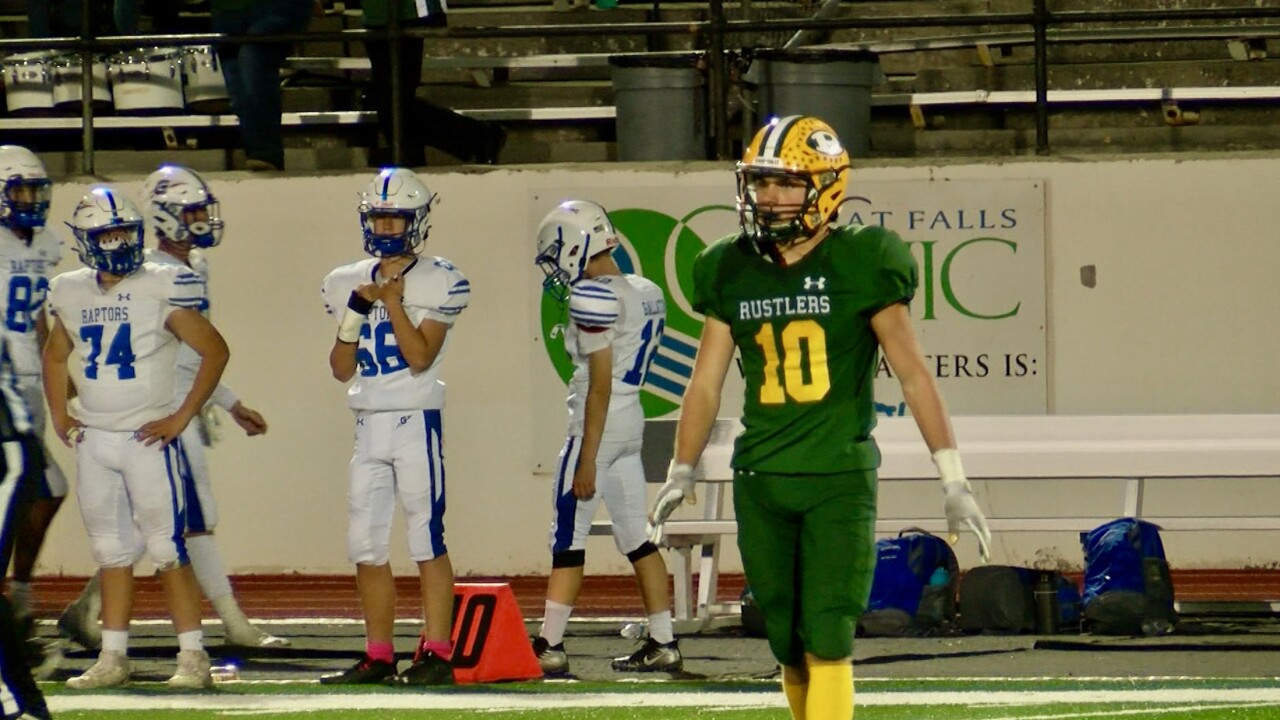 GREAT FALLS — Asking a coach what he told his team in the halftime locker room after a second-half comeback win is cliche. But for Great Falls CMR and head coach Dennis Morris, it’s telling. With CMR trailing Bozeman Gallatin 14-0 at the break on Friday, Morris offered a simple message.

That made all the difference. The Rustlers responded with six touchdowns in the second half for a 42-21 Eastern AA football win over Gallatin.

It wouldn’t have been possible without the heroics of sophomore defensive back Cayden Doran, who had a roller coaster of a game. Rylan Schlepp caught Gallatin’s first two touchdowns in the first half, and Doran was covering him on both.

But he didn’t have to wait long for redemption. With Gallatin looking to go up three scores, he came up with a diving interception in the second quarter to help CMR find a spark and bit of momentum.

“It was really coaches, players all helping me up,” Doran said. “That stuff happens in football, so you just have to come back and make a play.”

Then, with the game tied at 21 in the fourth quarter, Doran jumped a route for his second interception, which turned into a 25-yard pick-six and the go-ahead score for CMR.

“We spend a lot of time watching film in the class room, I personally watch it very, very carefully,” Doran said. “I studied that play, and I knew exactly when it was coming. And I just got myself in the position to make the play. Finally, a pick-six. I’ve been waiting all season for it.”

On top of that, Doran had an impressive punt return for a touchdown that was called back due to a CMR penalty. But it was clear to his coach that the sophomore was doing some special things out there.

“He’s a sophomore that keeps getting better every single day. And to boot, he’s 5-(foot)-6 and they put a 6-3 receiver on him. And he does everything he can to cover (Schlepp),” Morris said. “But, you know, he keeps working hard and he keeps getting better every single day, and (Friday) was his day. He got beat on that first touchdown there and took it to heart and came out and played great football.”

On the offensive side of the ball, quarterback Raef Newbrough scored four rushing touchdowns on just eight carries. But he was set up by his two-headed monster at running back. AJ Lafurge (11 carries, 120 yards) and Jackson Simonson (21 carries, 161 yards) combined for 281 rushing yards, moving the chains at will in the second half.

“It was just our drive, our emotion,” Lafurge said. “We wanted to win on Homecoming night and do all the royalty proud. And we whupped them in the second half.”

Simonson, who missed two games earlier this season due to COVID-19 contact quarantine, had his best game as a Rustler when his team needed it the most.

“Going back down to the basics instead of trying to get all these complex things in,” Simonson said. “The basics always work I think.”

The win was do or die for the Rustlers, who now sit 2-3 and are very much in the hunt to make the postseason.

The Rustlers close out the season with Billings Senior (4-1) and crosstown rival Great Falls High (1-3).