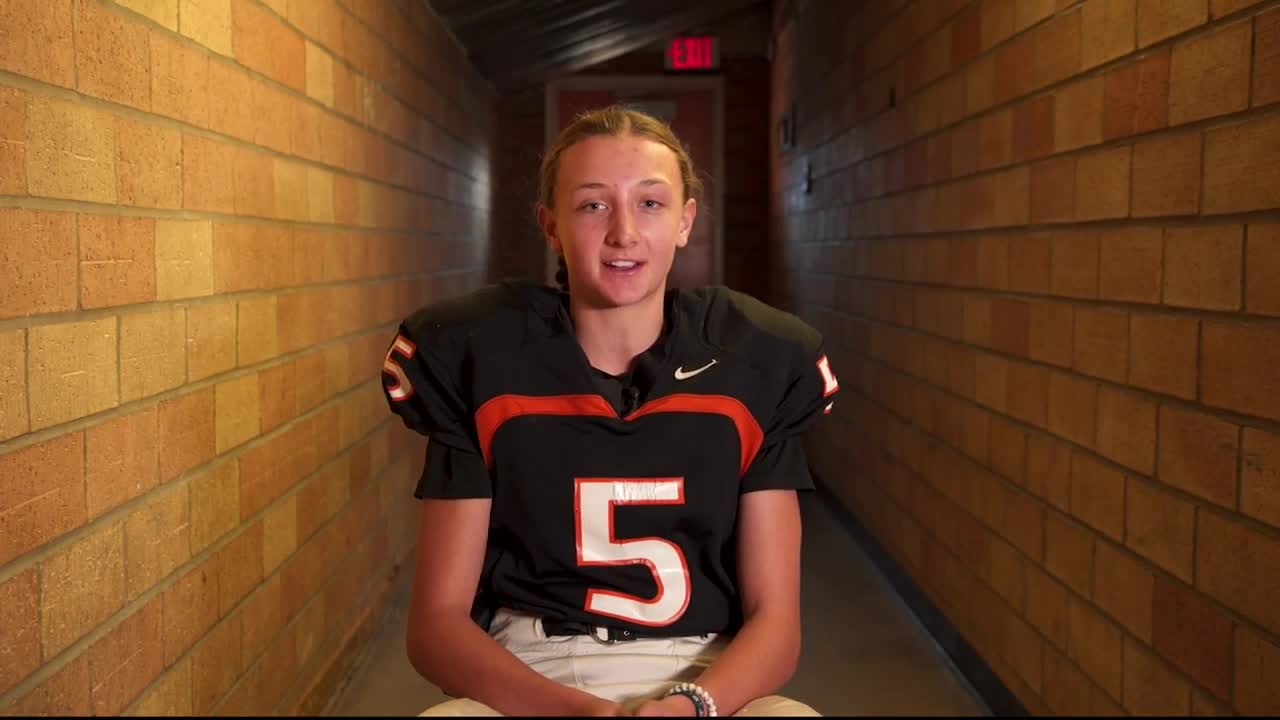 BILLINGS -- Lauren Cummings is a young athlete with a twinkle in her eye. But that twinkle may be misleading.

The freshman at Billings Senior is about to play her first high school basketball game.

"I love winning," she said, smiling. "I like to play defense. I just love everything about basketball."

Truth is, Cummings loves whatever sport is in season, that includes high school football.

"My passion mainly started when my cousins were talking smack," Lauren told MTN Sports on an October afternoon at Daylis Stadium. "So, then I really wanted to play football, and they wanted me to play, too, so we could play against each other. Then I joined and I've been playing ever since."

She's the one with braids who started her share of games on Senior's freshman team.

"It's addicting," she said of football. "After making one good hit you just want to keep hitting and hitting. And you get back up again and just hit 'em."

Safe to say Cummings loves defense, and her shot arrived at an unexpected moment.

"We lost one of our cornerbacks, so we needed someone else," she recalled. "I raised my hand and said I can do this. So the coach just threw me in. I didn't know any of the plays, but I just played like, 'Alright, if a person comes at me I'm going to tackle them.'"

Cummings' dad, Kris, confirms her early love for the sport.

"As a young child even when she was 5 years old, she always had a football and threw it around," he said. "We'd play catch."

"My mom did not want me to play," Lauren laughed. "I told my dad I wanted to play and he was like, 'Oh, OK.' He didn't really take me seriously until I really started to get into it. Then he was like, 'Oh, you're really into this.'"

And she was. We've seen a handful of girls across the nation kick and sometimes punt - both of which Cummings did for the Broncs this season - but it's rare. And those aren't really her first choices of position. That would be quarterback.

"I just think it's super fun. You control the game, basically," she said.

Kris remembers Lauren trying her first NFL Pass, Punt and Kick competition at age 7 or 8. Then one day after school four years ago she brought home a youth football camp flier.

"We fought it for some time and thought that camp might get the bug out of her because they were going to tackle," he said. "She came home from the first day of camp and just absolutely loved it. So, I went the next day and watched and saw how much she enjoyed it. We said, 'If this is something you want to do, we'll support you.' She ended up playing an indoor Mighty Might League and continued to have the bug for football after that."

Fast forward to four months ago in mid-August when father and daughter were on their way to the field.

"I do remember a conversation, taking her to the early morning practice as the sun is coming up, and I asked her, 'Lauren, are you ready for this? You've got men out there and this is high school. This is real football.' And she said, 'Dad, I've been waiting for this my whole life,'" Kris said.

"Give me a spot on the field and I'll do it," he said of Lauren. "That's just kind of her mindset and she's ultra-competitive. And, really, that happens on a daily basis for her. It's not like, 'Well, I'm going to be competitive because it's Game Day.' She's locked in at practice and in the weight room. This summer we had her in the weight room with us and she was locked in there. And anytime we were doing workouts on the field, quarterback stuff. I mean, it means a lot to her."

It's no surprise Lauren is also locked in at the house.

"When I get home from work, if she feels like she needs to throw more, we turn on the lights and she's throwing passes," Kris said.

As for taking heat from other players because she's a girl? Lauren says no, because she's grown up playing on teams with a lot of them. But not all of them.

"Uh, when I first saw her I thought she was actually a manager for the team, she was just working out with us," teammate Lorenzo Maxwell said with a grin. "You have to have a sense of mental toughness and physical toughness, and Lauren has both of those. She took hits constantly when she was in. And the last two games she even played corner, so she was on defense and she was hitting."

Maxwell is right. Cummings took her share of punishment against bigger, faster, stronger players. But on her first action at quarterback early in the season, she lobbed a touchdown pass and ran for another.

"She's very athletic," Maxwell said. "She's one of the most athletic women I've ever met. But she's also just kind and generous and caring, because I would always ask for snacks, she would always give me snacks. She'll do anything for a teammate."

"I saw that my dad, he played baseball, like, all his life, and I wanted to be like him," she said.

Her dad played for American Legion Baseball's Billings Royals. No girls has ever played Legion ball for a Billings team. Until now. Cummings survived the cut a few weeks ago.

"Yes, I was nervous (about the tryout) because there were a ton of kids," she recalled. "And I heard that, like, 30 kids were going to get cut. So, my anxiety started kicking in like, whew."

Then, on the final day of cuts: "We'd been waiting for, like, two hours. Then they called all of us in at once and told us we all made it. I was super excited."

So she's one of only six players on the Royals side to make the Billings Legion B team. The other six are crosstown Scarlets.

"Just that drive that she has to keep coming at you," he said. "Honestly, I just admire her ability to compete and just her willingness to not just play a girls sport, but to try and compete with the boys. As far as baseball, I think everybody knows that she fit in. She earned her spot."

It turns out baseball has actually been more punishing on Lauren's body than football.

"Two years ago, the last game of the year, I got hit in the jaw and it broke my jaw," she recalled, smiling. "It was sliding into second again."

She pitches, plays middle infield and has the speed to start in center field. But, naturally, she loves playing the most physical position in baseball: catcher. And she has the arm.

"Yes, I have, I've thrown multiple people out," she acknowledged sheepishly.

Then, in her final year of Little League: "I did hit a home run. I almost hit back-to-back, but it tipped off a kid's glove and went back in."

"Lauren is very confident in herself, in who she is," Kris said. "I think that's a big part of it. Just as a young child growing up she always knew she could to her own thing. Was confident being independent in her decisions. She doesn't follow a group. Very strong-willed. Maybe stubborn.

"She has some great qualities. I guess she's well-equipped for what she's going through right now. The strangest thing for Katie and I is, we knew we wanted three children, we were blessed with three girls. And as we were walking into Daylis Stadium for the first game, we looked at each other and thought, 'No way did we ever think we'd be coming here to watch one of our kids play football.'"

Of course, the elephant in the room is wondering how worried her parents are about the physicality of football.

"There are those concerns, but they're all out here playing," Kris said, motioning to the field where his freshman daughter was playing under the lights. "They're all kids and they should all have an opportunity to do what they love.""

So, the next time you’re at a football field, ball park, or courtside, keep an eye out for the braids. Odds are Lauren Cummings will be playing for a while no matter the sport.

"Oh, for sure," Maxwell confirmed. "She'll probably out-do all of us."